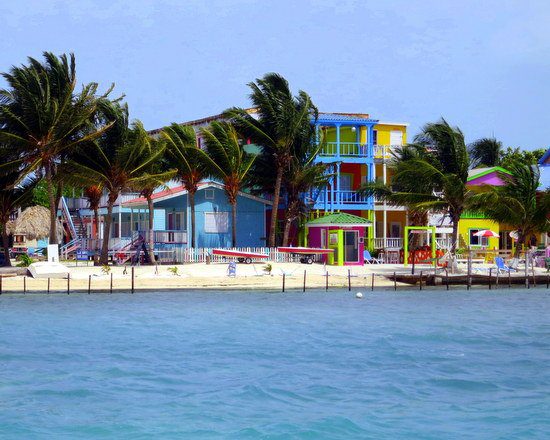 As we were planning our Belize Honeymoon, advice flew forth from friends, fast and furious:

“Go to Ambergris Caye! It’s more posh and there’s more to do.”

“No, Caye Caulker is so much better! It’s so chill and relaxing.”

Back and forth the factions battled, until at last Colin and I settled on three nights in Ambergris Caye, followed by one night in the center of Caye Caulker.

That way we could sample each and compare.

We loved both islands, each in their own special way, but we were happy with how we timed our stay.

Here is the tale of our time in Caye Caulker so you can make your own decision. 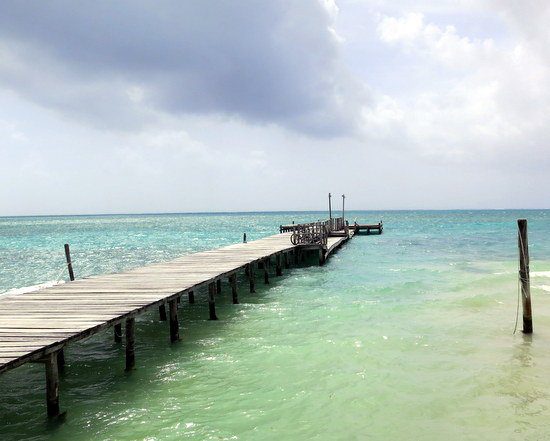 Tiny Caye Caulker, Belize has many piers like this into the Caribbean.

Colin and I were so relaxed during our stay in Ambergris Caye that we guffawed when locals told us, “Caye Caulker is where we go to chill out. It’s much more laid-back than here.”

“How is it possible to be more relaxed than Ambergris Caye?” I asked in shock.

But the moment we stepped off the water taxi onto Caye Caulker, we understood.

The vibe on the tiny island is so completely chill that we fell immediately into a hazy, happy stupor.

We dropped our bags at the hotel (a two minute walk from the water taxi, as most things are, given the size of the Caye), and began wandering.

There are no cars on the island, so except for the occasional slow-moving golf-cart, we could stroll down the center of the dirt roads in peace. It’s so relaxing to hear zero motors in the air! 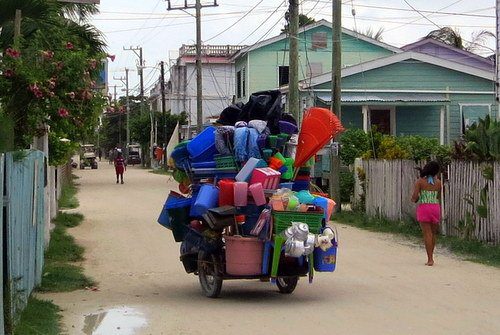 There are no cars on Caye Caulker, but we did see this man pushing a cart with brightly colored plastic thingies.

First we wandered south of the water taxi dock. I was starving, but it was 4pm and not much seemed to be open.

We sauntered along the beach, which grew wilder as we walked on.

“Oooh!” we cooed, ogling a hotel that featured weather-worn beach bungalows on stilts between the sea and jungle.

Speaking of jungle, we then came to a wall of green trees.

Ever-resourceful, Colin spotted a path into the thicket. I trailed along behind, scouring the earth with my eyes for snakes.

We trudged through the thick, steamy jungle. “The last time I blindly wandered an island, I was in Thailand,” I muttered. “I’m scared!” 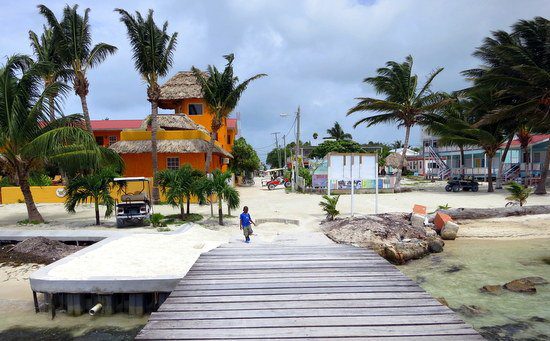 A little boy plays on a Caye Caulker pier.

“Don’t worry,” said Colin, “Hippies have been here!” He pointed at the neatly painted signs labeling each of the tree species in front of us.

Sure enough, after a few more minutes of jungle tromping, we emerged into a dusty golden dirt road. We peered around and realized we’d hiked to the end of the tiny island.

So this time we walked through the center of Caye Caulker, passing wind-caressed wooden houses, locals sitting or strolling tranquilly outside, a man wheeling a giant cart of brightly colored plastic thingies, happy visitors, and so on. 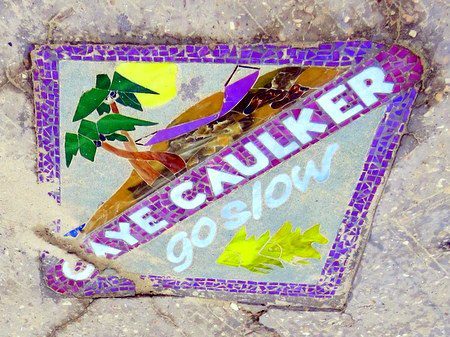 A sign on the crumbling sea barrier. Caye Caulker takes its reputation as “The Most Laid-Back Place in Belize” seriously!

Not much time had passed before we spotted the far tip of Caye Caulker.

“It’s called “The Split” because that’s where it split from that other land over there,” I told Colin.

All around the island tip, azure water lapped at the crumbling concrete barriers. Gleeful swimmers of all colors and backgrounds bobbed in the water and reggae music wafted from a homey wooden restaurant.

We bought ice cream because we ached for it. Colin’s cone was better than mine, despite my initial certainty that “Chocolate Crunch” would best “White and Dark Choco.” Luckily, my husband was kind and let me take some bites.

Then we spied several piers stretching into the water, unguarded.

“Are those hammocks swinging from the end of that pier???” I exclaimed. We closed in to investigate. Yes, by golly– there were two delicious hammocks overlooking the Caribbean Sea. 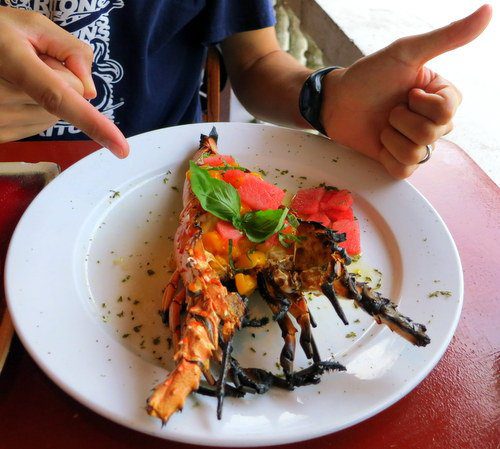 Colin and I snuggled into the rope cocoons and swung gently in the breeze.

The kite made a “BLAT!” sound each time it smashed onto the ocean surface: the loudest sound we heard our whole time in car-free Caye Caulker.

After an hour of hammocking, it was a respectable dinner time, and thus we walked to the first open-air restaurant we found: an excellent Belizean-Italian joint.

I ate seafood lasagna and Colin scarfed a fire-grilled lobster with watermelon and mango.

“This island is awesome,” I purred between mouthfuls.

“We would have had a different Honeymoon flavor if we spent more time here,” said Colin, “but I’m content how we timed things.” 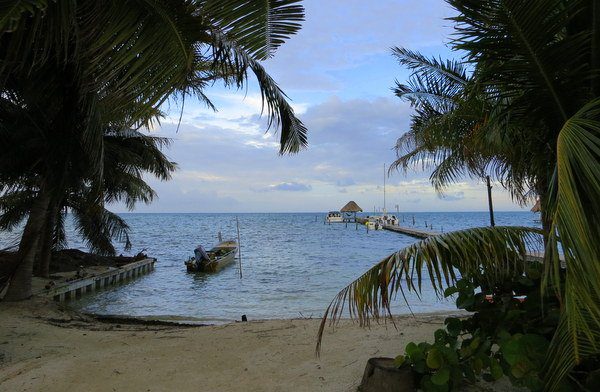 Our beach view during our open-air Caye Caulker dinner.

The equatorial sun sank behind the beach palm trees in front of us, turning the ocean periwinkle, then silver-black.

So what about you, dear reader? Which seems more your scene: lively and refined Ambergris Caye, or chilled-out-to-the-max Caye Caulker?

Pricing and availability can make a big difference in your choice! Here’s an easy affiliate link to click for Ambergris Caye hotel deals, and Caye Caulker hotel deals. These links provide a small commission at no extra cost to you. Happy travels!

Hi, I'm having trouble finding info on day trips to other islands from Caye Caulker. Aside from Ambregris Caye. I found some snorkeling trips, which we will likely do, but I'm talking about other islands where you can spend the day or overnight. Do you know of any? Thanks

There are many out there, but these were the ones I did. Keep on searching and I know you'll find something! Sorry I can't give a more detailed answer, but wishing you best of luck!

Thanx for your article. Do you know if there is beach-accessible snorkeling on CC? Are there patch reefs? Or is all snorkeling accessible only by boat? Thanx! Here's to your happy marriage. Sally

Hey Sally, Thanks for your comment and kind wishes. My impression is that you can snorkel off the beach and see some things, but the really good stuff is further out (not too far at all though). Get a second opinion on this, though. :) Enjoy your trip!

Hi, in what hotel did you guys stayed in Ambergris caye?

Hi Corina, thanks for your comment. Here is where we stayed: https://aroundtheworldl.mystagingwebsite.com/2012/07/26/our-beautiful-resort-in-san-pedro-belize-the-phoenix/ It remains one of our favorite hotels ever.

Snakes!!! I laughed because I grew up amongsdt them and only fear the fer de lance. And that one I do fear! regardless..I can't wait to arrive on beautiful Caye Caulker. I'm staying a month and I'll be in one of the apartments owned by the principal of Oceans Academy. If I like it as much as I think I will, I'm going to plan my retirement in Belize. I am 51 years old and stroke disabled. Anyone have any opinions regarding Caye Caulker vs. Placencia? Thank you!

Thanks for your comment! Caye Caulker is more laid back and "hippie" while Placencia is more fancy. Both are great!

Hello! My fiance and I are currently planning our honeymoon in Belize coming up in August! I'm curious - which hotel did you stay in on Caulker Caye? I think we are going to spend 2 nights there :)

Hi Sandra-- Congrats! I actually don't remember the name of that hotel because we chose a budget option after the fine luxury we did for the rest of our trip. I recommend using online hotel rating sites to pick a place, as they're usually on target if they have enough respondents. You'll love Caye Caulker! Have a wonderful time!