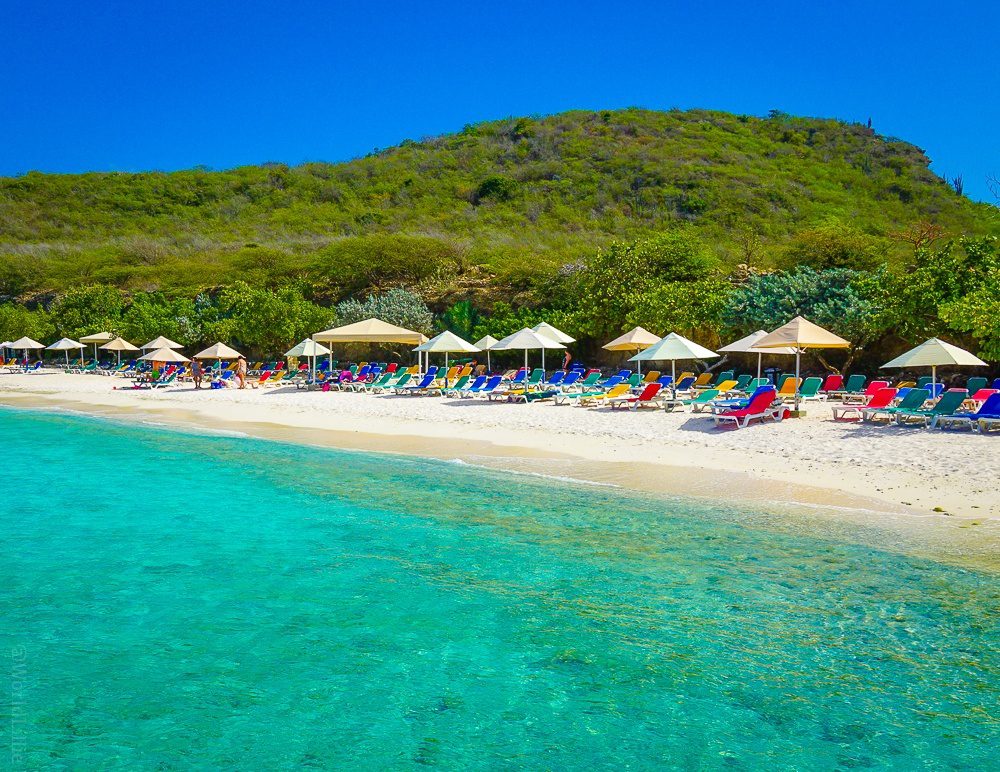 Warning: The beach photos in this article are ridiculous. You may bonk your head against the screen whilst impulsively attempting to dive into the images.

Where is Curaçao, and What are the ABC Islands?

Curaçao is a petite island in the “ABC Islands” of the Caribbean (Aruba, Bonaire, and Curaçao) that vacationers are just starting to discover, and it boasts some of the most beautiful beaches I’ve seen in my life.

Let’s tour three of the best Curaçao beaches, and you pick which you’d most enjoy! I’ve put them in reverse order of my own favorites… 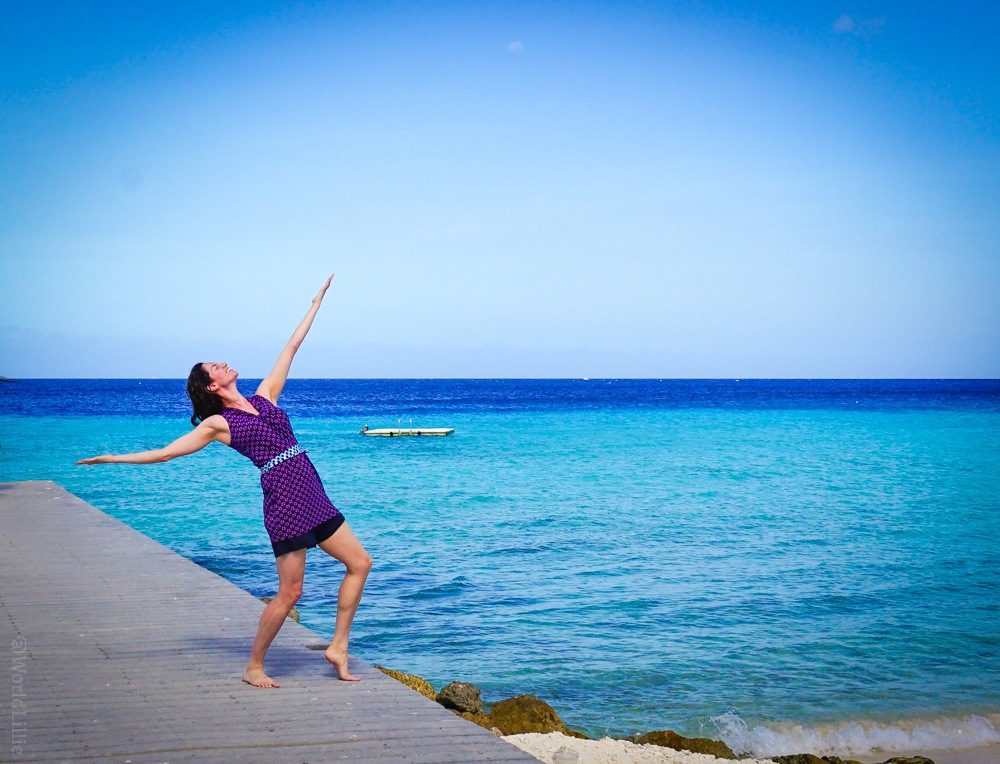 Me, taking in the glory of Porto Mari.

Playa Porto Mari was the first of SEVEN beaches I toured on my second day in Curaçao.

Yes, Curaçao is only 171 square miles, meaning you can drive around the entire island, stopping to swim at half a dozen shore spots, in just half a day. (For this reason, renting a car is a great idea for a Curaçao vacation.) 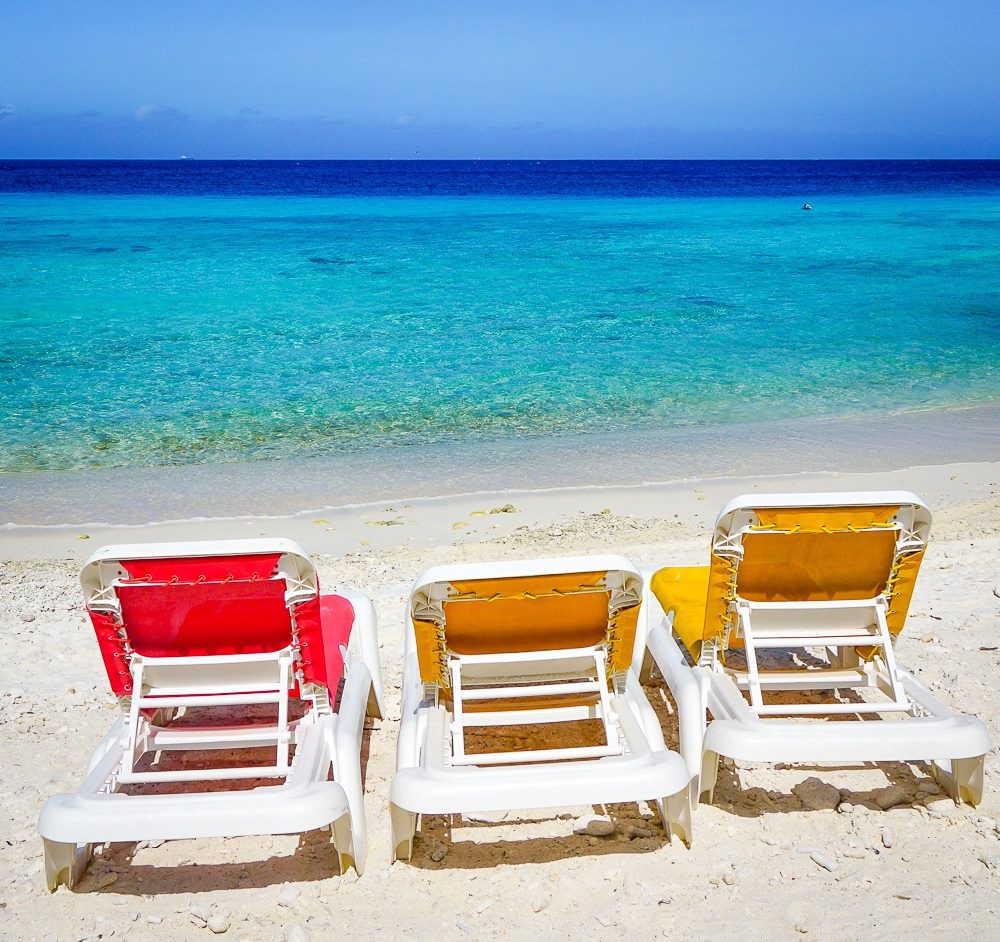 Which beach chair is yours?

Porto Mari is about 45 minutes north of Willemstad (home to the houses that look like cakes), on the west side of the island.

My favorite part of this beach were the candy-colored beach chairs, sprawled like a rainbow road between the turquoise sea and emerald hills. 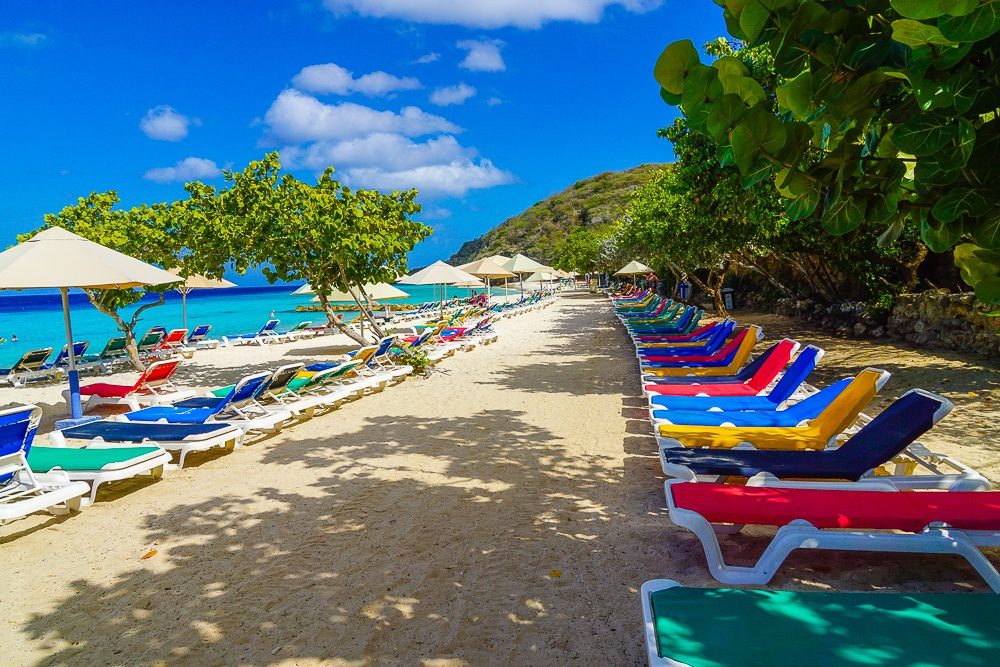 Stroll through the candy-colored aisle of beach chairs.

Snorkeling and Diving in Curacao Beaches

Like many of Curaçao’s beaches, snorkeling and diving are a win at Playa Porti Mari, but you can also just walk out onto the pier and stare, agape, at the shimmering aqua expanse, ringed in sapphire at the horizon, past the reefs. Doesn’t that man on the raft, below, look like he’s on a magic carpet, soaring through the sky? 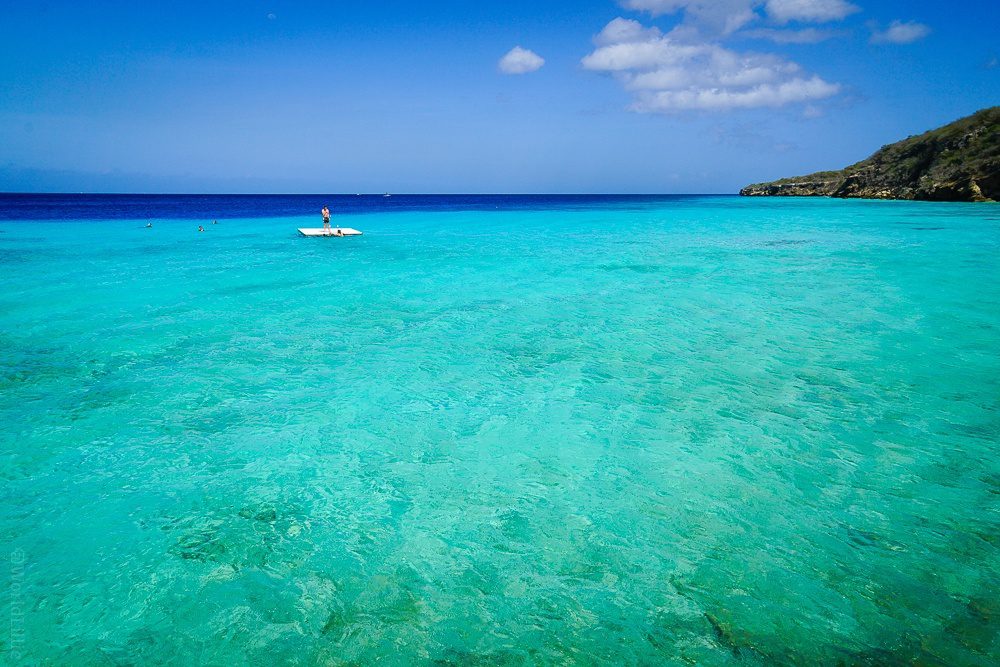 Get lost in the sea of azure…

Being a Bostonian who loves trees, but rarely sees those of the palm variety, I became entranced in Curaçao by the shadows of palm trees. There’s something regal about them, as though angels are fanning you with giant feathers! Gaze below, and imagine the warmth of reclining on that hot pink beach chaise… 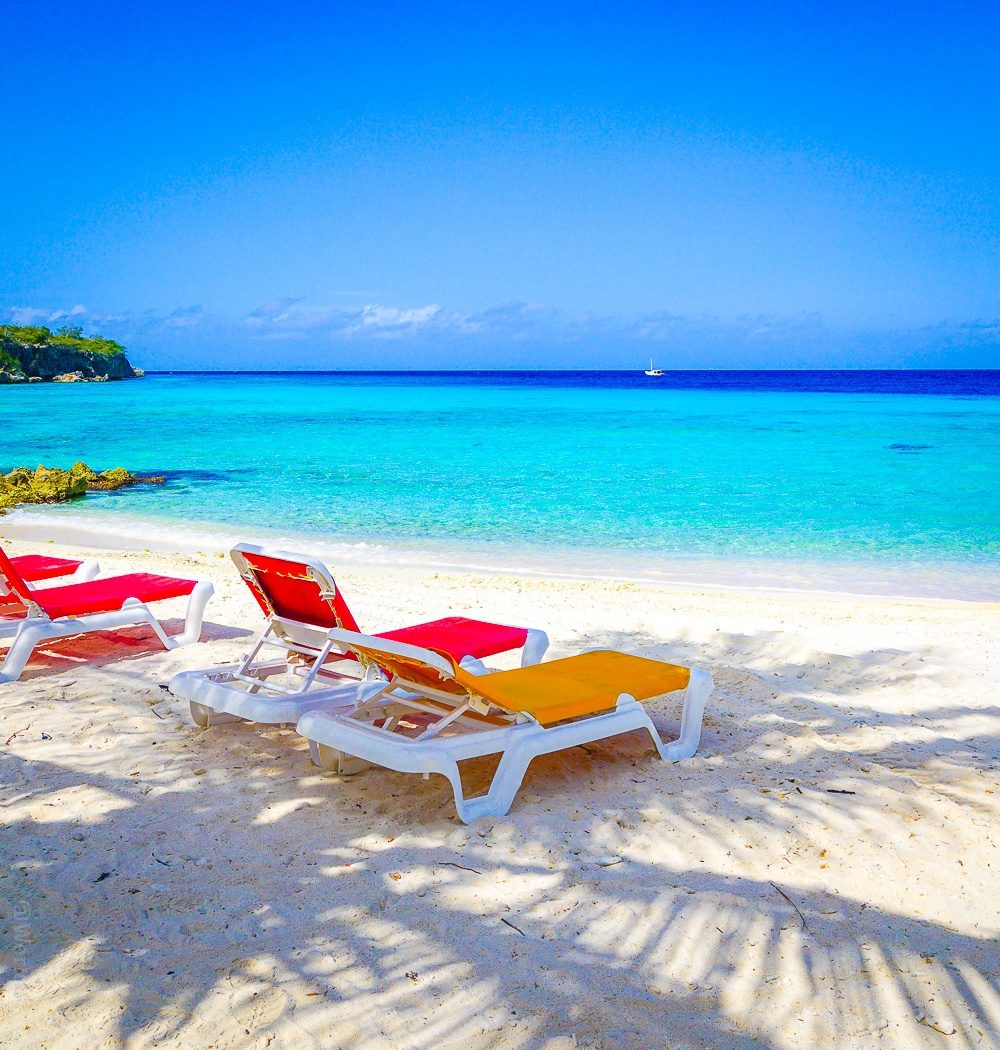 Oh sorry — I just dozed off into a sweet reverie of wave sounds and swishing palms! Ahem. Onward with our tour.

The next beach is in many ways my personal favorite, because it felt so hidden, intimate, and unlike any beach I’ve seen before, or imagined. (Cacti?!) The name of this place is… 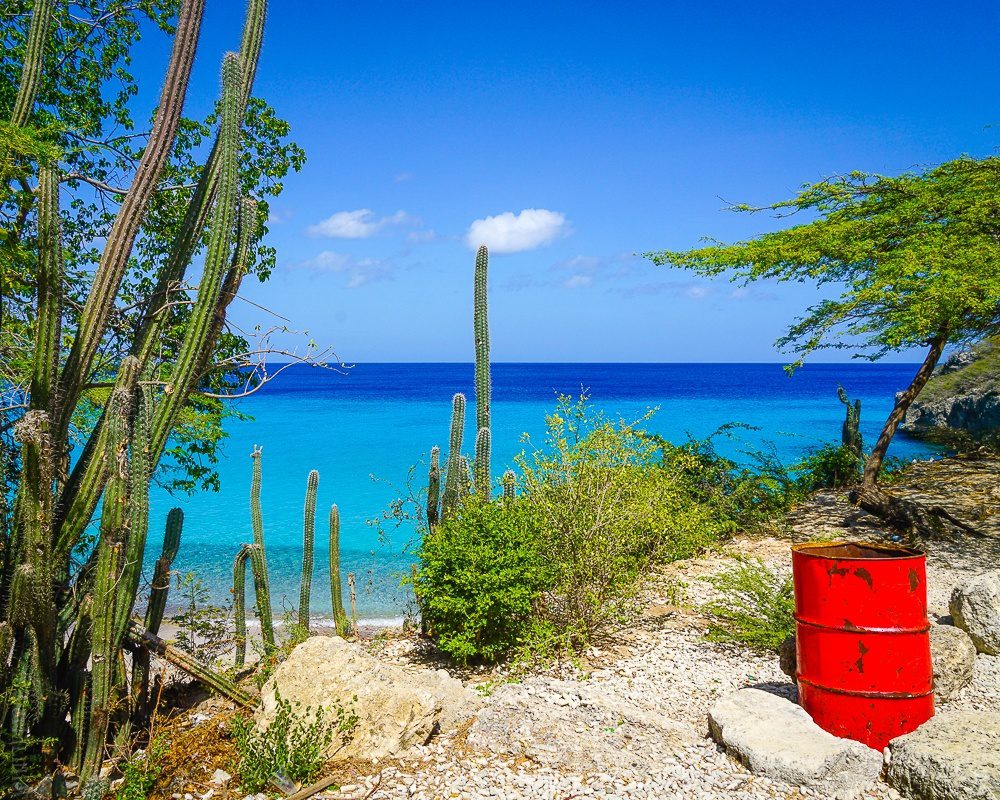 Who knew a trash can could be so pretty?

Playa Jeremi! Even the name is sweet, right? “Hi, my name is Jeremi the Beach, and I have spiky cactus hair!”

I particularly love that scarlet red trash can perched on the cliff above the beach. Praise to the person who correctly concluded that the color is just the lipstick kiss that Jeremi needed on his rocky cheek! 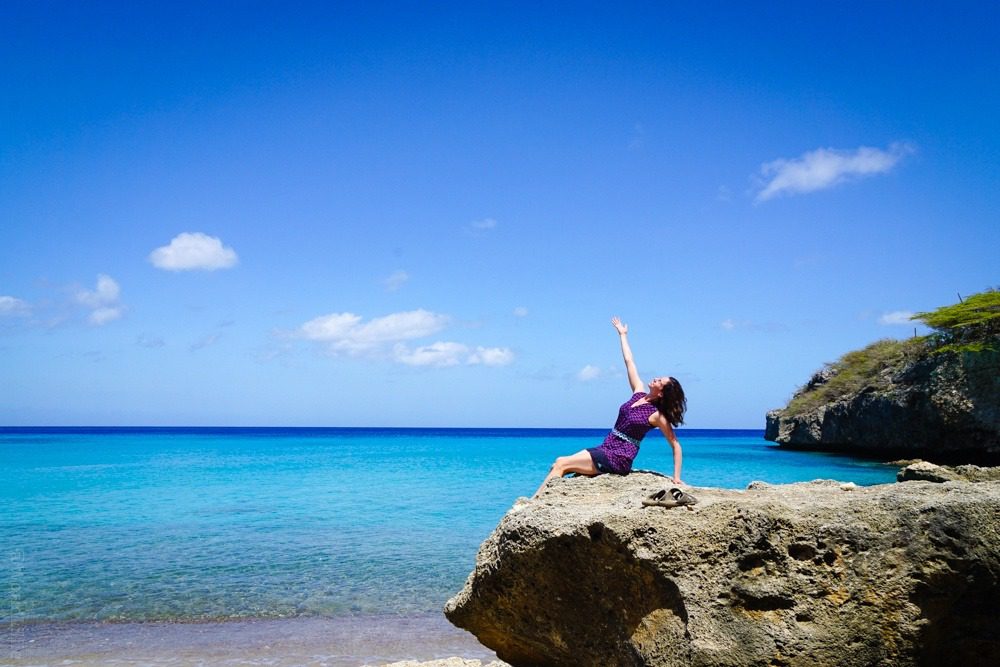 Jeremi made my heart soar! This pose attempts to convey that.

Playa Jeremi personifies the spirit of Dushi: the official catch-phase of Curaçao.

Dushi means “sweet” in the sense of lovely, delightful, charming… the best part of humanity. There is something about the scraggly sharpness of the cacti paired with the otherworldly-perfect blue of the ocean at Jeremi that is Dushi, incarnate. 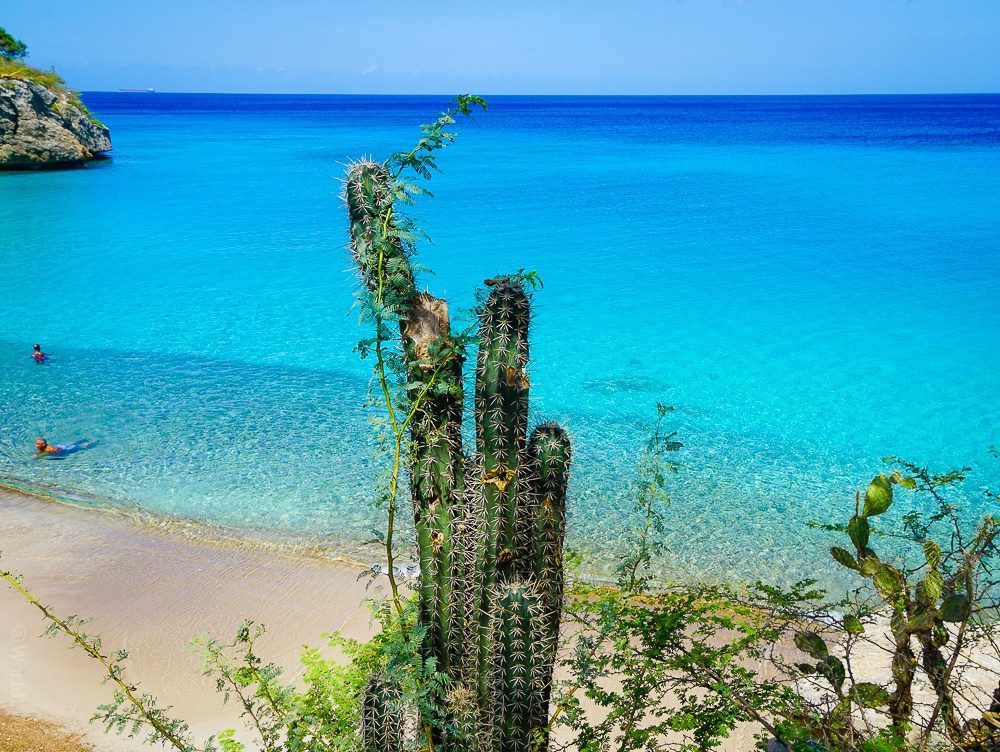 I’d never seen cacti at a beach until Playa Jeremi.

When I visited, mid-day, the beach was almost empty. Gazing down the cliff, however, I spotted two shining figures flitting around the waves. It was a father teaching his young daughter to swim! Can you see their glistening heads poking from behind the cacti arms, below? 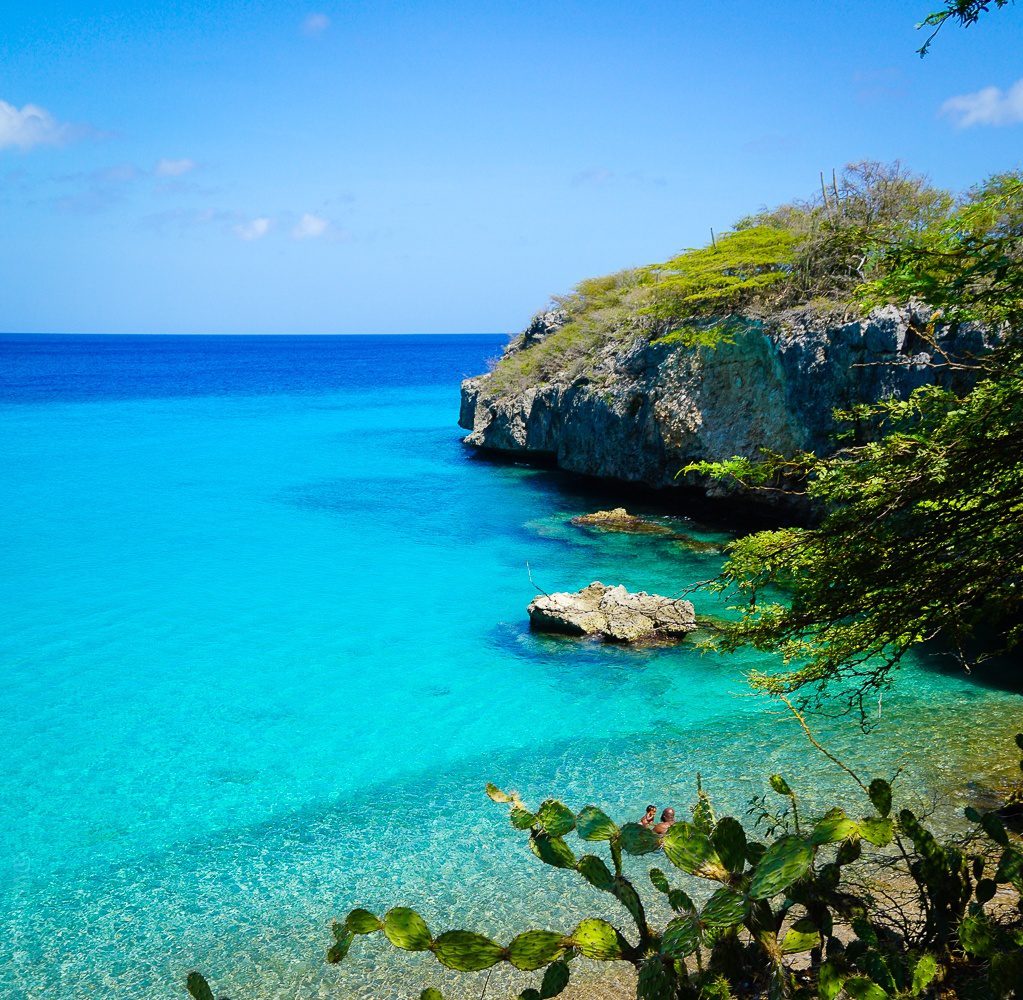 See the father teaching his daughter to swim, behind the cacti?

Kenepa Grandi, or Big Knip, was the crown jewel of my Curaçao beach investigation, and this crown jewel sits, fittingly, towards the “head” of the island, on the northwest tip, about an hour north of Willemstad. 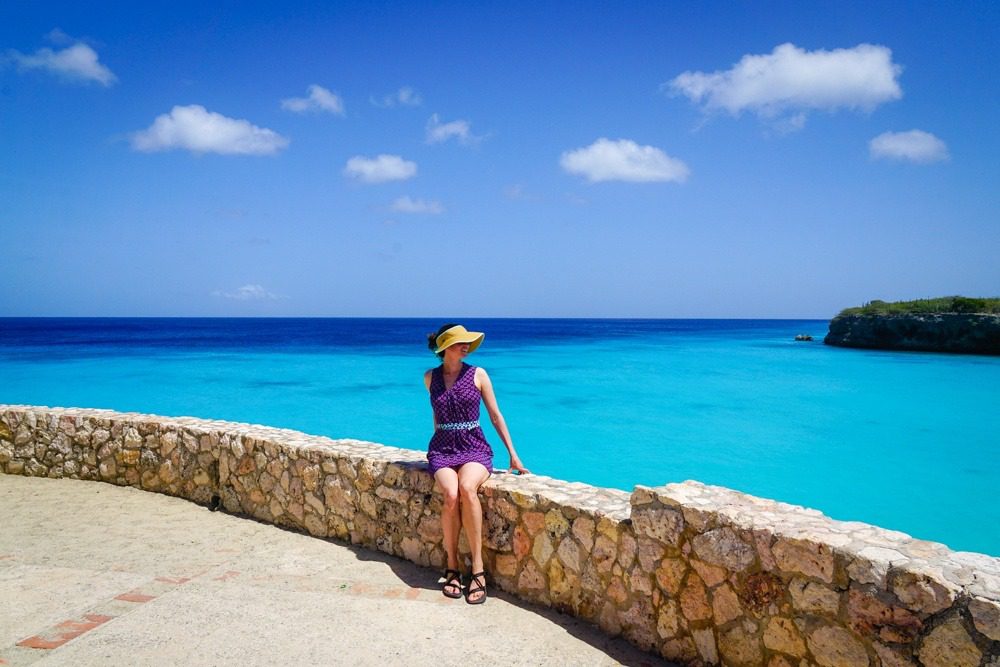 Me, taking in the gorgeous view (and being sun-safe!)

As I confessed in my article about why Curaçao was so great for travel, I actually started crying at the first glimpse of Kenepa Grandi, it is that beautiful. While Playa Jeremi is quietly gorgeous, Kenepa Grandi is such an expanse of perfect turquoise water that it knocks the wind out of one’s chest. 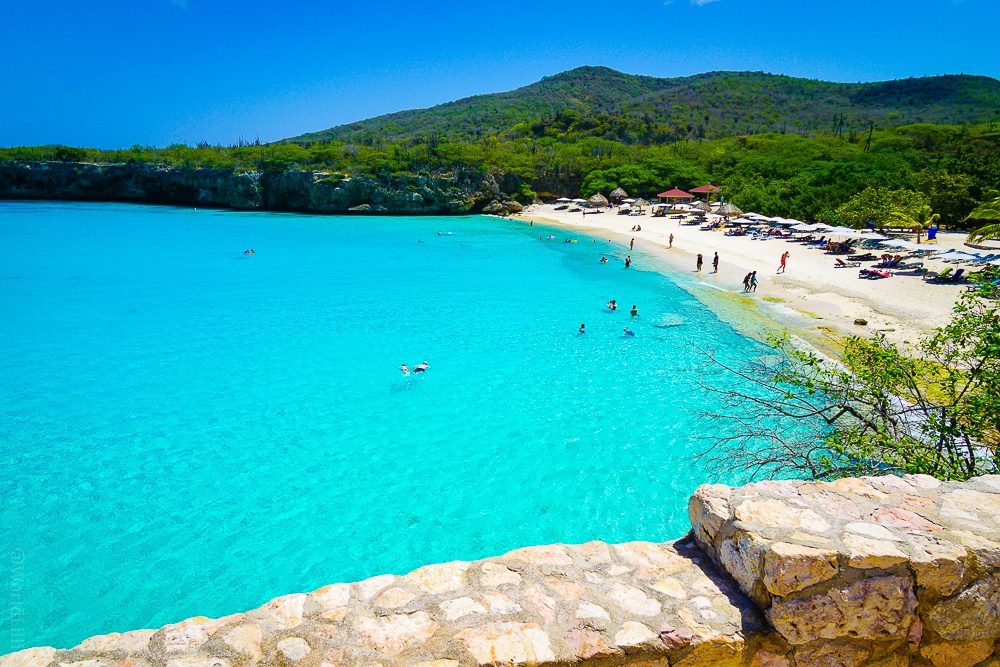 I started crying with the beauty when I first saw Kenepa Grandi.

So by now, you’ve probably figured out why the sweet, orange-flavored liqueur called “Blue Curaçao” is colored that luminous turquoise… it’s the shockingly accurate color of the island’s ocean beaches! 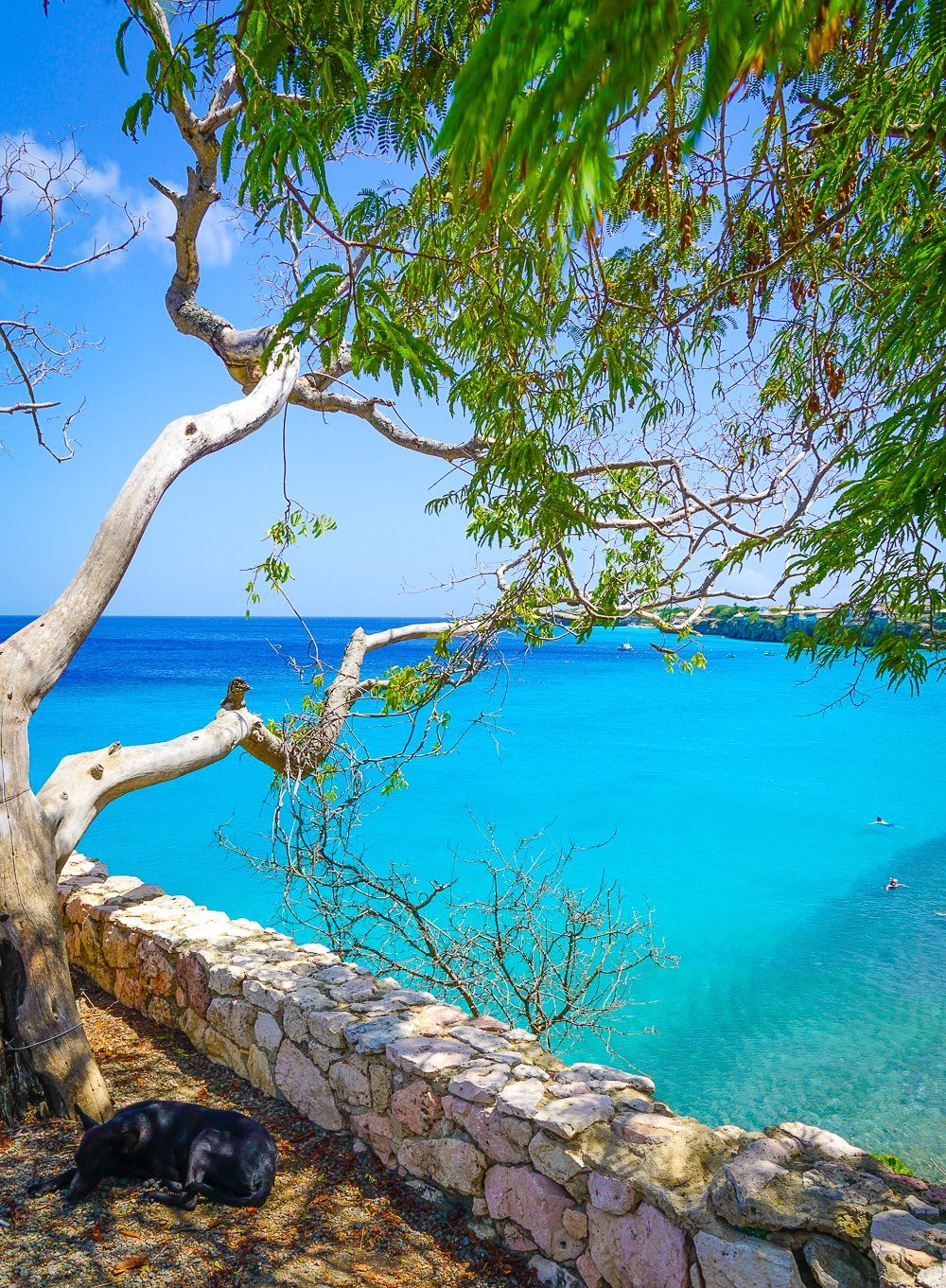 That dog found the best spot to lounge.

When I visited, though there were quite a few people on Kenepa Grandi beach — swimming and snorkeling in the water, and trotting around the overlook cliff (from which I took these photos) — the beach is so wide that it didn’t feel crowded.

My tears of joy fell even faster, watching this local father and son’s bonding talk as they gestured out to horizon. What might they have been discussing? 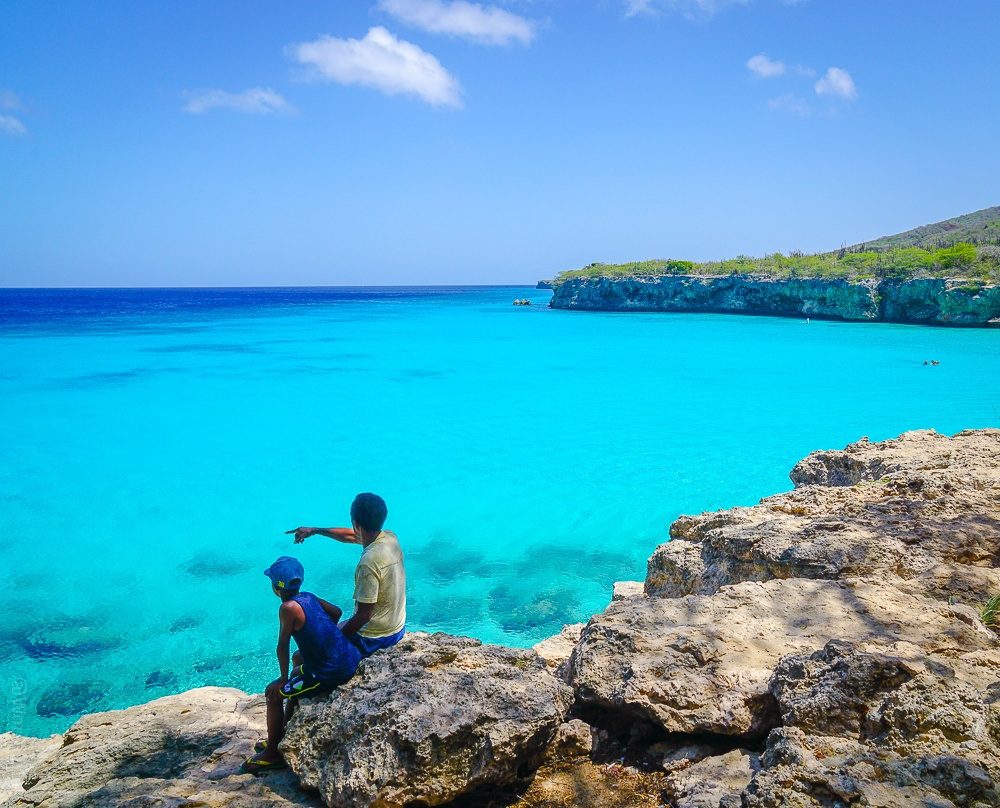 A father showing his son something on the horizon.

Are Curacao Beaches the Best in the ABC Islands?

Indeed, Curaçao beaches are some of the most beautiful in the world… and this post doesn’t even touch on the architecturally mind-boggling “infinity beach” featured in my previous article! Now I’m aching to know: Which of these three do you like best? Do share!

I was a guest of the Curaçao Tourist Board, but all opinions and knobby knees are my own. 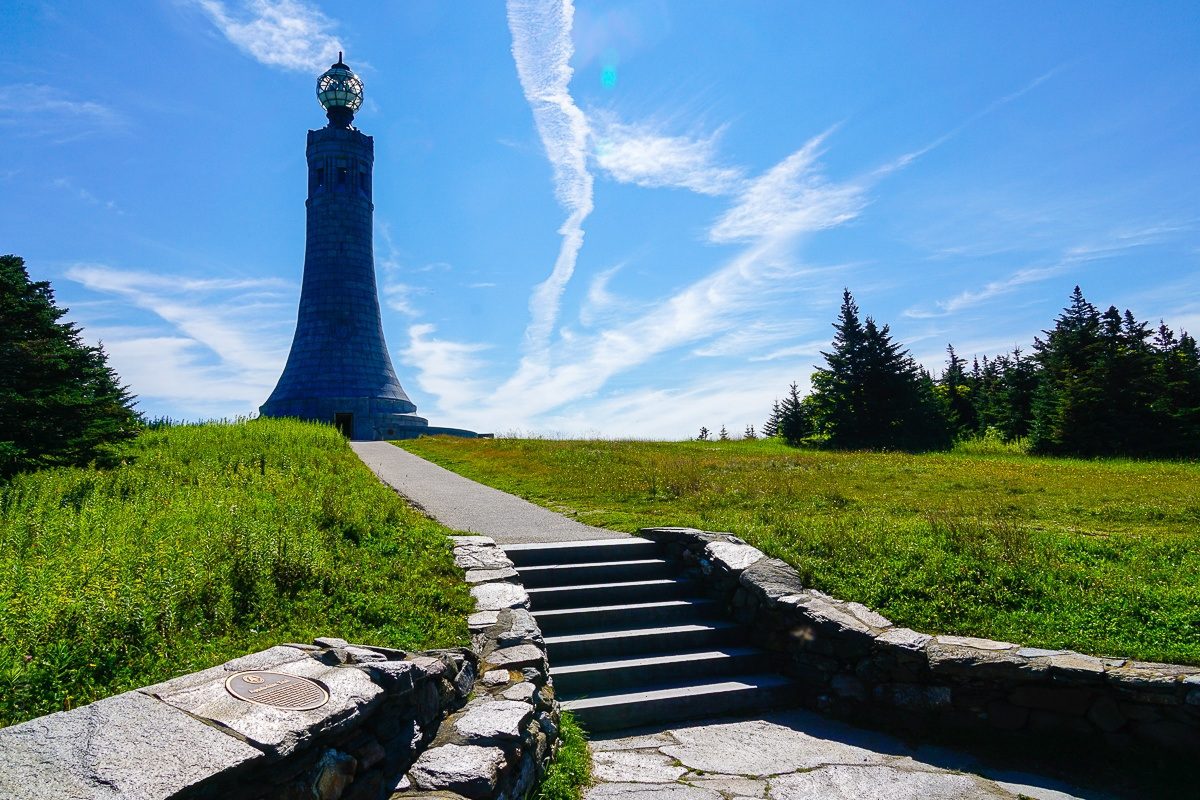 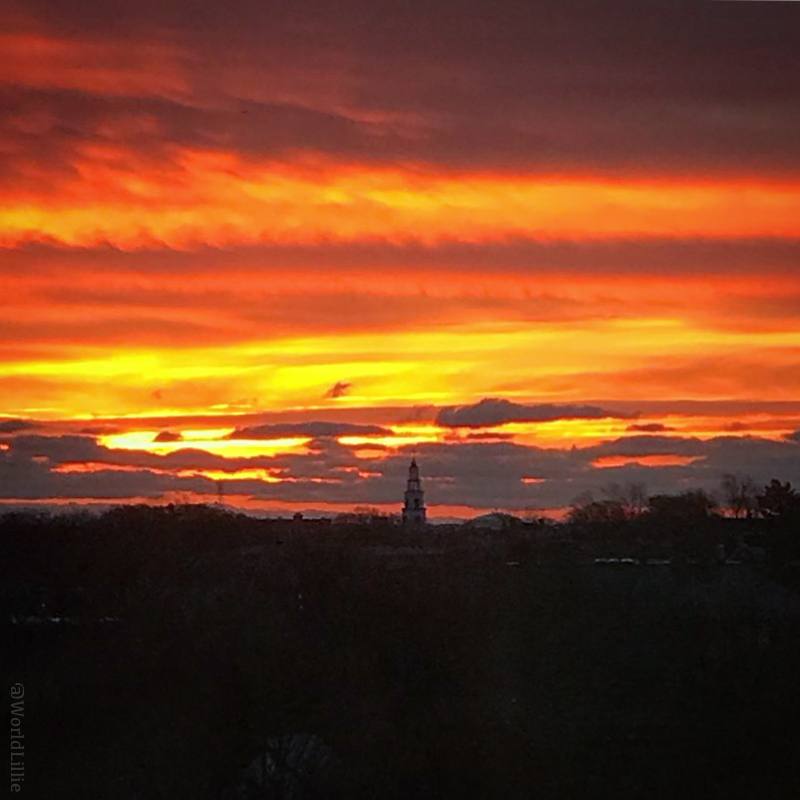 What is Too Sick to Travel? Or: "How to Decide if I Should Fly to Peru Tonight???"
Read Next Post →
Click here to cancel reply.

Such a beautiful color! I would like to know what times of the year the water is warm and when it's too cold. Here in Florida the water is too cold some months.

Thanks for your question, Peter. It's warm all year round, in and out of the water!

Wow ! beautiful pics. You have inspired me to travel.

I enjoyed reading it and certainly your research and effort is worth laudable. Will keep in mind the fantastic points you listed on my next holiday.

The color on the last beach is simply stunning, so I'll go with that one. I really like Curacao. More to see than just the beaches---not that there's anything wrong with the beaches!

Agreed -- the island has so much else to offer, too!

This place looks beautiful! I would love to travel here sometime.