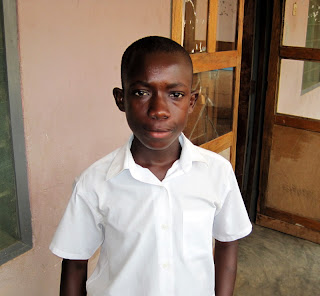 I was scared when I saw the tiger opening its mouth. It looked like an old yelling monkey and it was one and a half meters long. All my friends were afraid.

Some people outside of Africa think that here in Ghana, we walk with wild animals every day. They think we play football with lions and ride to school on elephants. This is just not true! Our class trip to Kumasi Zoo was the first time most of us had seen these ferocious beasts.

It was on the twenty-fourth of July, 2007, when I visited the zoo at Kumasi. According to the Ghana Tourist Board, Kumasi Zoo is one of the most popular attractions in our entire country. I went there with my classmates on an educational excursion which was organized by our class teacher.

When we reached the entrance leading to the zoo, we alighted. Our class teacher, Jacob, was asked by the security man at the gate to pay some amount of money for the pupils before entering the zoo . 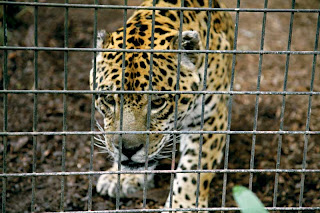 We were tired because the trip was about six hours from Sogakope to Kumasi. We were all wishing to see the tigers, lions, and leopards, because most of us had not seen such animals before.

About five different workers advised us: “Comport yourself well!” and we agreed. Inside the zoo, we were at last taken to where the animals are kept.

The first animal we saw was a snake. It was very long– about ten feet long– and it smelled like a fried monkey. It sounded like a cat hissing: “Ssssss!” My friend Caleb said, “I am afraid of that big snake!”

After that, we saw animals like tigers, lions and other beasts. Some of the animals looked wild and very fearful. The wicked animals such as tigers and lions are kept in strong cages because they are ferocious and can easily try and get out. 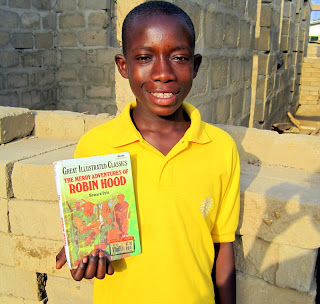 After we saw almost all the animals in the zoo, we went home, very happy about the visit.

So the next time that you hear someone talking about how we Africans dance with leopards or chat with zebras each day, remind them that the first time I ever saw a tiger was in a cage in a zoo, six hours from my home!

I think there are many animals nearby the road and people with them are very friendly before I read your article. I want to see people can easy touch and protect animals in Africa.

Luddy Sr. said... Ha ha! I really enjoyed your story Elikem. You are correct, people in the USA do have many preconceptions about what life is like in Africa. When I came home from my trip to Ghana many of my friends were surprised that I didn't come face to face with elephants and tigers!

I am happy because next time someone asks me about this subject I can just have them read your story so they can learn how it really is from a true African like you!

Aaron from Happytimeblog said... Great srory Elikem I really enjoyed it! I laughed so hard at the bit where you say the snake "smells like a fried monkey" that coffee came out of my nose!!! You also made a very interesting point about being far away from the animals, something that I didn't expect. Aaron (Norfolk UK)

Andy Jarosz said... Great story Elikem. Thank you for sharing it with us. It sounds like a wonderful zoo. And 6 hours to reach it! No wonder you were tired :-)

Anonymous said... Hello! This is Elikem!

Thanks for passing on good comments about my story. Watch out for more stories from me. Aaron, I hope the coffee is out of your nose.

With Love and Fried Monkeys, Elikem

Eli said... Elikem, I am very impressed with your English! Thank you for sharing your experience, I hope that you enjoy many more fun trips and adventures. Does Elikem have a meaning in Twi (or your local language?) My name is Eli, so I'd be interested to know if there is an English translation!

Thank you for passing me more good comments! Here is the answer to your question about my name, Eli.

When I was six years old I asked my father, "Father, what is the meaning of Elikem?" and he decided to tell me the whole story. In the olden days when life was miserable and my parents had no money, they suffered a lot to get money. When they gave birth to me, they gave me the name "Elikem" because that means "rescue me from suffering" or just "rescue". Eli, guess what my elder sister is named? "Eli"! But we pronounce it "Ehl-eee", not like "Eee-ly!" as you do!

I did some work in the country of Belize in Central America where many people there hadn't seen some of the wonderful animals that live in the forests of their country. Your story reminded me of how very important it is that all of us around the world have the chance to learn about the animals and plants on our planet!

They have magnificent jaguars but they are so private that even people living in the forests hardly see them! A small zoo in Belize City now helps to educate the people about the animals. When we learn about how important each animal is in the balance of life we feel differently about them. Even the cockroach is a very important decomposer though I'd rather not find them living in my house!

Some of the animals you saw may have been afraid as you wrote. Maybe some are bored being caged. It isn't normal for those big cats to be face to face with people so you can imagine! Many places that keep animals try to make life a little more interesting by providing something new to the cage for them to explore. One day at the Cincinnati Zoo we watched as the keepers put some big pieces of fabric into the exhibit of the gorillas for them to explore. Some of the animals put the cloth on their head or around themselves like a cape. One female gathered up several pieces and put it on her head to carry them. She even went over to another gorilla and took her cloth. Then she carried them to the far end of the exhibit and made a nest for herself to sit on.

I wondered about what kind of snakes live where you live. I'll have to look that up! We have no poisonous snakes living around were I do. The ones we have are important because they eat mice and rats and other small rodents so they help control that population.

I find that many people are so frightened of snakes that I got two snakes as babies that are now 11 years old and live in classroom. The kids hold them each day and help to care for them. Now the kids have a different feeling about snakes! They were afraid at the start of the year but not now! They understand not to pick up ones in the wild but not to hurt them either.

We have two pet rats and they are the kids favorites. They are very smart animals. We let them run around the room and they come back when called. The other morning Ollie, our one rat, was inside of my purse! He looked very funny looking out the top like a purse-pet. I had an apple in my purse and he could smell it and had gone inside to get a bite for himself. Normally, I DO NOT leave food where they can get into it. I learned my lesson to put my purse away when I get to the classroom.

We have a guinea pig too. They live in Peru, but many kids in the United States like to keep them as pets as they are friendly and easy to care for and don't take up much space.

PS It is snowy here today. We've had a lot of snow this winter and the kids slide down hills on sleds and build snowmen for fun. The birds look beautiful with the white blanket of snow all around. We had 26 cm on the ground last week.

Oh, we even had two Madagascar hissing cockroaches that were class pets for a few years. The kids held them too. I tried to get two females as I really didn't want them breeding... but we found out that one of ours was a male and another a female when they produced a lot of babies! That news was the last time parents allowed the kids to bring them home for a weekend visit to their homes. I can't blame them really. The kids called them Hissy and Kissy. They can live for 5 years! Amazing. When Hissy seemed to be dying the kids in the class were very sad that I could not take them to a veterinarian to have it checked. I don't know of any doctors here who take care of cockroaches!

Anonymous said... Hi Elikem, It's Stacey! Your Pen Pal. :) I promised myself that I would stop by and read your article. This is very interesting to read because most people do think a lot of random things about Ghana because they don't live there. I've been to the zoo a couple of times when I was about your age but I haven't been back ever since then. Reading your article makes me want to go back to the zoo. I'm also afraid of tigers and lions too, they are huge and any animal that is bigger than me I won't go near it. Lol Great Job though on this atricle Elikem, you are a very smart boy. :)

Luddy Sr. said... Yes we all hope that the coffee is out of Aaron's nose! Hahaha!