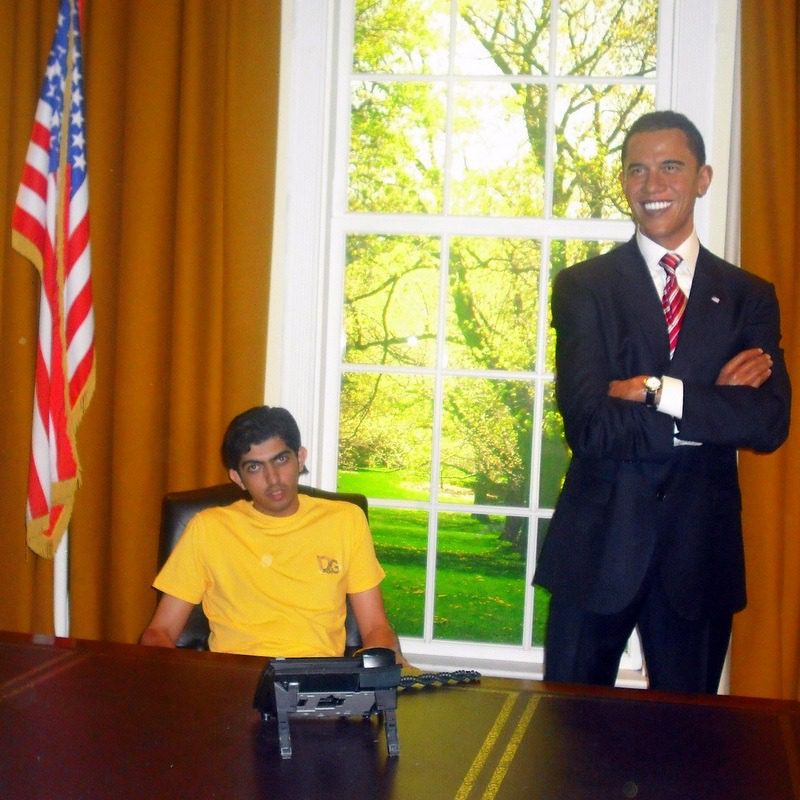 The meeting was simple and very fast.

I simply introduced myself and asked Obama, “Could I sit in your chair in the Oval Office of the White House?”

Obama shook his head in humor, and, smiling, said, “OK!”

And then I was sitting in the chair of the President of the strongest country in the world, with Obama at my side!

Sorry about my white lie in the first two paragraphs.

Actually, this all took place in Madame Tussaud’s Museum in London and the President I met was made of wax.

When I studied in England last summer during a break from teaching Mathematics in Saudi Arabia, I asked my friend, “Would you like to go with me to the museum?”

My friend replied, “I don’t like any museums. If you go to another place, I will go with you.” 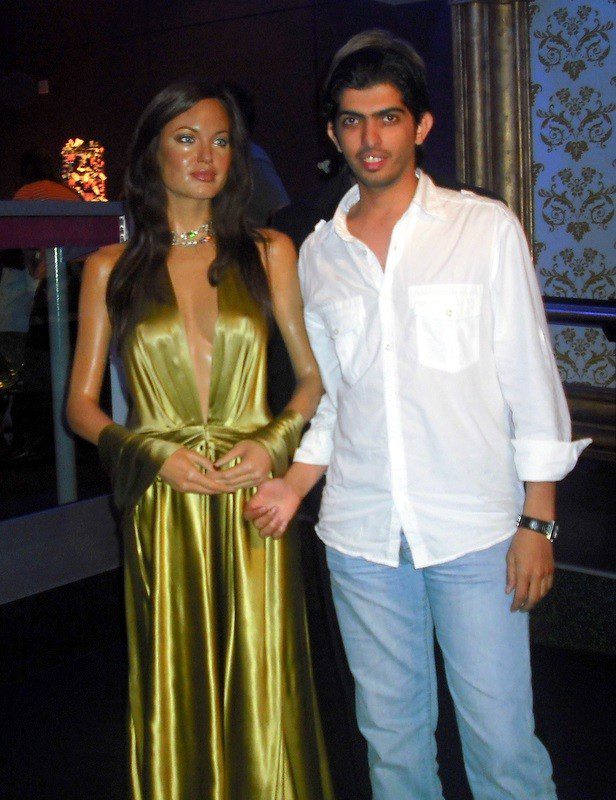 Angelina Jolie! Can you see Brad’s hair behind Faisal?

I told him Madame Tussaud’s Wax Museum is different.

“You will feel good when you put first foot in it,” I said.

But I didn’t give him any more information about the museum, because I wanted him to be surprised.

After one hour, my friend decided to go with me. Then we hurried to take the bus to Madam Tussaud’s.

When we arrived, I saw the longest line of my life in front of the museum gate. If we got in the line I worried the museum would close before we arrived!

Yet, my friend surprised me at this moment. He insisted we go into inside to see why all the people came.

When we got in line, two Saudi tourists said, “Come in front us if you want!”

Some people behind us became angry, but the Saudis told them, “All of us Saudis want to gather. The saying is: “ارفع راسك انت سعودي,” which means, “Saudis help each other.”

After we got inside the museum, we saw even more people than outside! 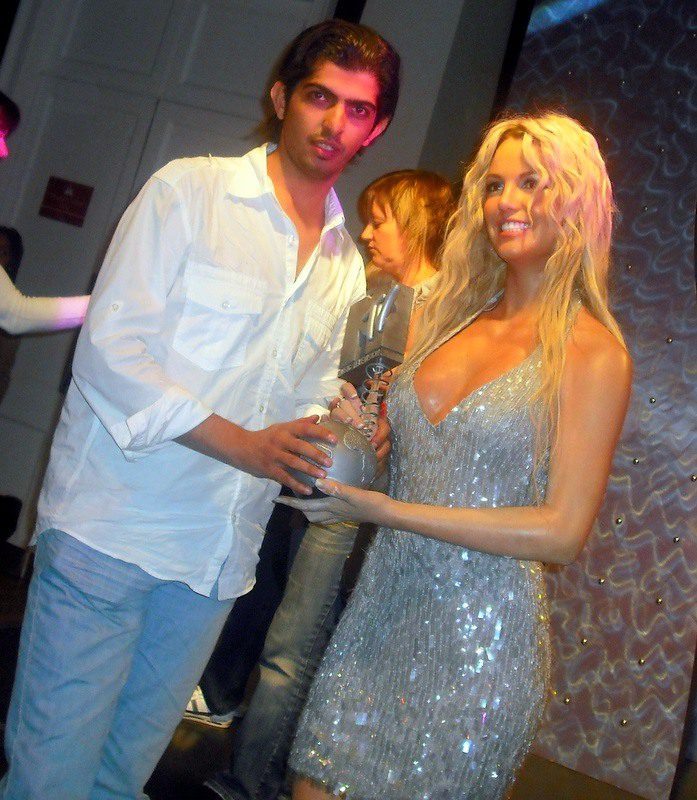 We started touring around.

After walking more, my friend opened his mouth in so much surprise.

He repeatedly bothered me by crying out, “Fasial! Faisal! Take my photo with this and these!”

The museum has many exhibitions of wax statues of famous people.

…and of course, World Leaders, where I “met” Obama.

After we arrived back home, my friend and I compared our hundreds of photos.

I laughed at him, “At first you didn’t want to go to the museum at all, but now you have 20 more photos than I do!”

And my friend smiled.

Lillie’s Note: Please leave Faisal a comment or question on his great article (and photos!) stating your geographical location. 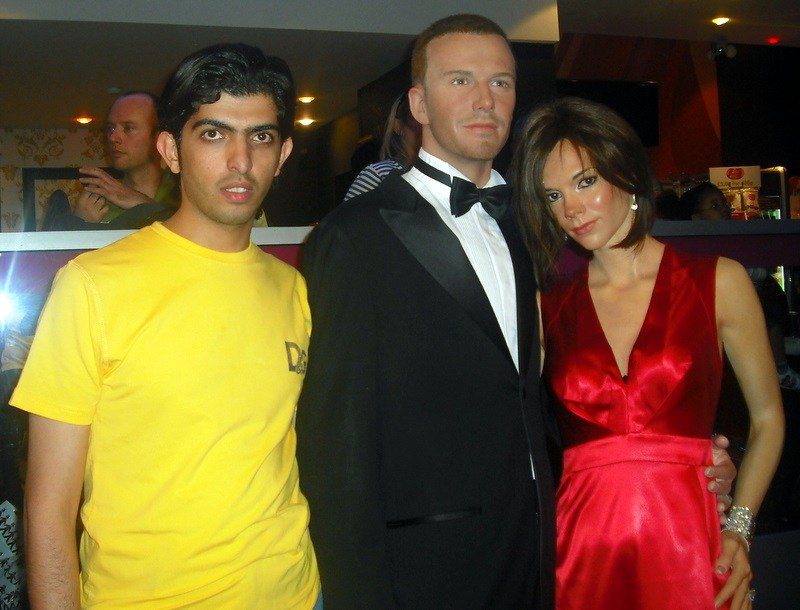 The wax statues look so creepy! Iâ€™m from Boston and I really wish I could have went there I went to England. -__- I just visited the Big Ben and stared at the palaces.

That is so cool! I can make a connection to the wax museum in New York that I went to for a vacation. It was just like the wax figures in the Madame Tussaud's wax Museum, except with out Britney Spears and President Obama. I can still remember that time when I went to the wax museum and there was a wax figurine of a door man which looked so real that I got scared so I crept over wondering if it would move, but I didn't so I hit the doorman and it turned out that it wasn't real. My mum was laughing at my silliness and a couple of my other friends, too. Ms.Marshall told me to state my geographical location which is Boston, Massachusetts. :)

I need to go here. Britney Spears looks so real! I really thought it was Obama! This place seems so cool and fun. Good job on your article, Faisal. You made me really want to go to the museum.

Hahaha that is so funny. I honestly thought that was Obama in that first photo then after I read about his "little white lie" I realized the wax Obama does look a little different. Great story Faisal!

Ok I thought he actually met Obama! I was like Ms. Marshall knows so many capable people. I was so jelous!