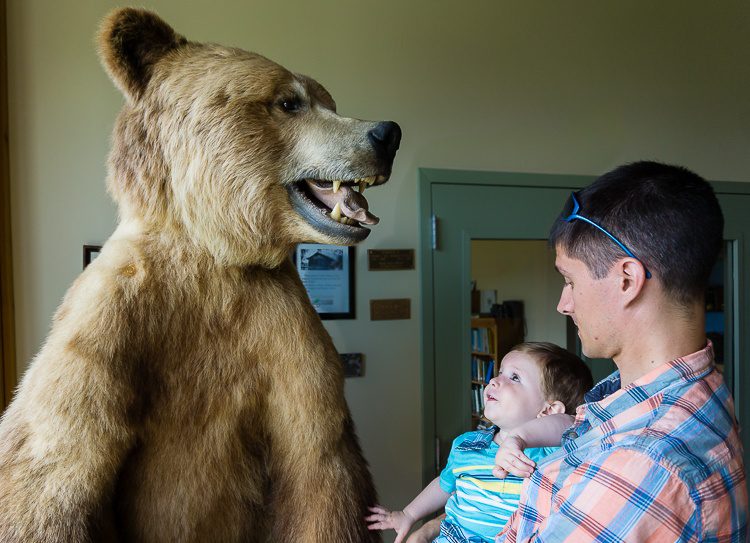 Petting a bear at the Tanglewood Nature Center in Elmira.

While planning our family’s Finger Lakes, New York summer trip, I assumed we should stay right ON one of the lakes. Upon reflection, however, Elmira, NY emerged as an affordable and strategic base for our exploration of the region, and proved to have a wealth of history and attractions to offer, itself. 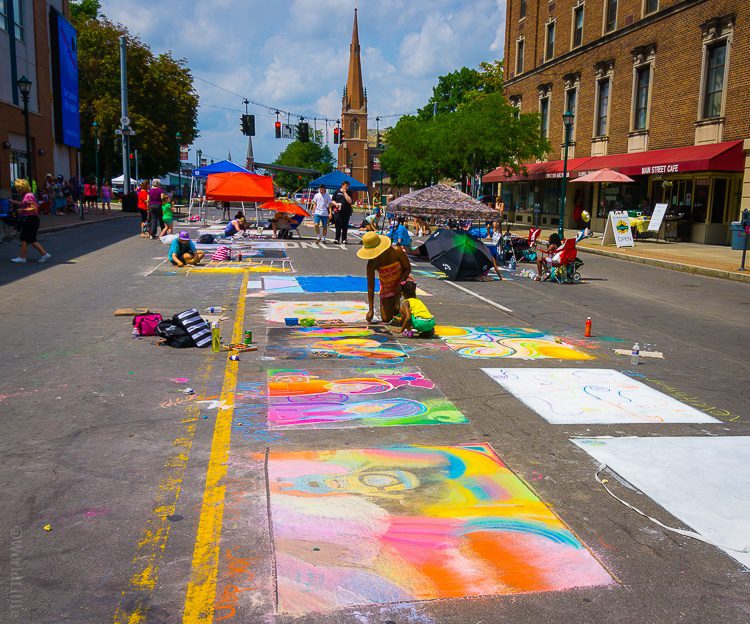 The Street Painting Festival in Elmira is a treat.

Elmira, a former manufacturing and railroad hub, is located an easy 30-minute drive away from many top Finger Lakes attractions, including Watkins Glen‘s gorgeous state park, the astounding Corning Museum of Glass, and the luscious vineyards on Seneca Lake.

However, Elmira is not just convenient. Since the town’s economy shifted away from manufacturing in the 1970s, it has been reinventing itself to embrace the arts, nature, and its historic connections to Mark Twain. 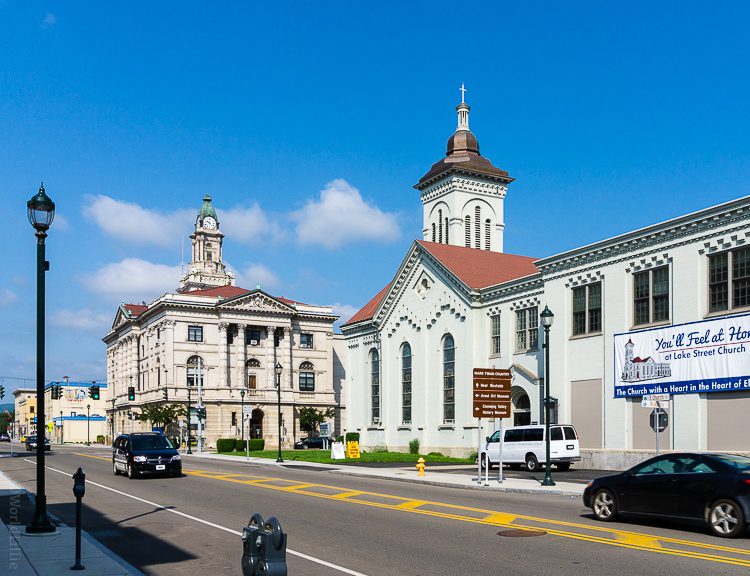 A street in Elmira. Such neat shapes!

The Elmira Street Painting Festival is a great example of this rebirth of the city. Since 2008, the festival has taken place every July to bring a riot of color in chalk to the pavements of downtown Elmira, and to celebrate local creatives and businesses. As a public school teacher who sees funding for the arts continually in danger, I am moved by this instance of how art can transform a place. 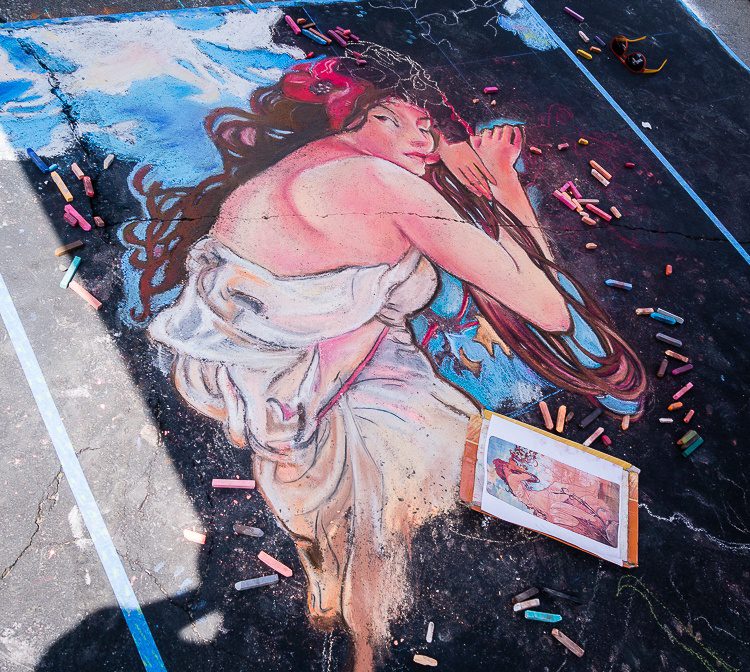 A beautiful woman created in chalk.

What really blew my mind about Elmira, however, were the deep roots that Mark Twain (born Samuel Clemens) had there. In a fascinating Trolley into Twain Country Tour, we heard tales of the famed American writer’s exploits around town, and tromped through the actual study (pictured below) where Twain wrote portions of Tom Sawyer! 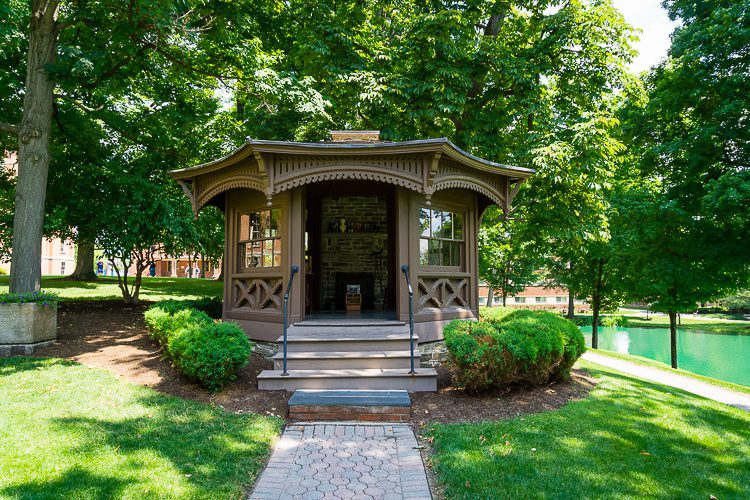 Twain Tales on a Trolly…

What brought Mark Twain to Elmira over the course of twenty summers? It was his marriage in 1870 to Olivia “Livy” Langdon, daughter of a powerful local family. According to our engaging trolley guide, Twain fell in love with Olivia before he ever met her!

One day while traveling aboard a ship, Twain spotted a painting of Livy in the possession of her brother, Charles, and the writer couldn’t get her out of his mind. The day Twain was finally invited to meet Livy in person, he stayed for 12 hours. After much persistence on his part, Samuel Clemens finally won over Livy Langdon, and they were wed. I love that love story! 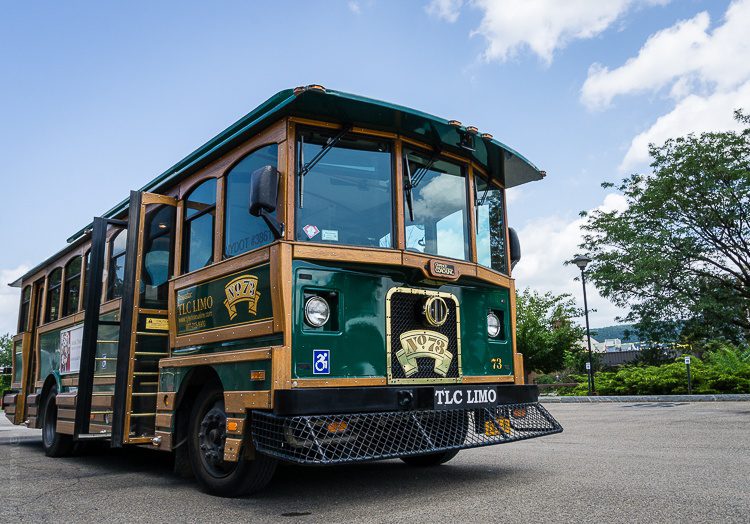 Much of the rest of Twain’s life, however, is painfully sad. I teared up during the tour as we stood in front of the final resting place of Samuel Clemens and his family, hearing from our guide of the tragic manner in which each member passed away.

As I looked around that leafy cemetery, I remember thinking, “This is so heartbreaking that I can’t bear to write about the details on my blog.” Feel free to look it up yourself if you want the whole story, but keep tissues nearby. 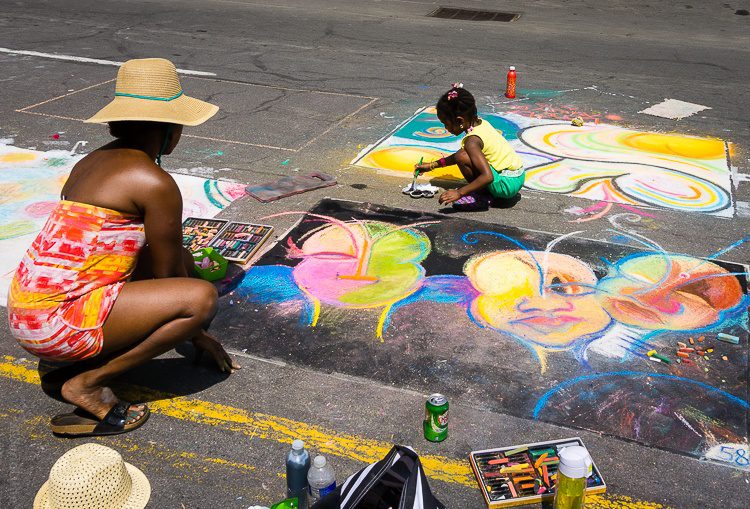 John Jones and the Underground Railroad

Another historic figure we learned about on our Trolley into Twain Country Tour made me angry, because his story was so inspiring that I was mad that I hadn’t heard of him before. The local man’s name was John Jones, and in 1844 he escaped slavery in Virginia and fled 300 miles north to Elmira.

There, he became a pivotal figure in the Underground Railroad, helping 860 former slaves escape to freedom. Not a single one of them was recaptured. 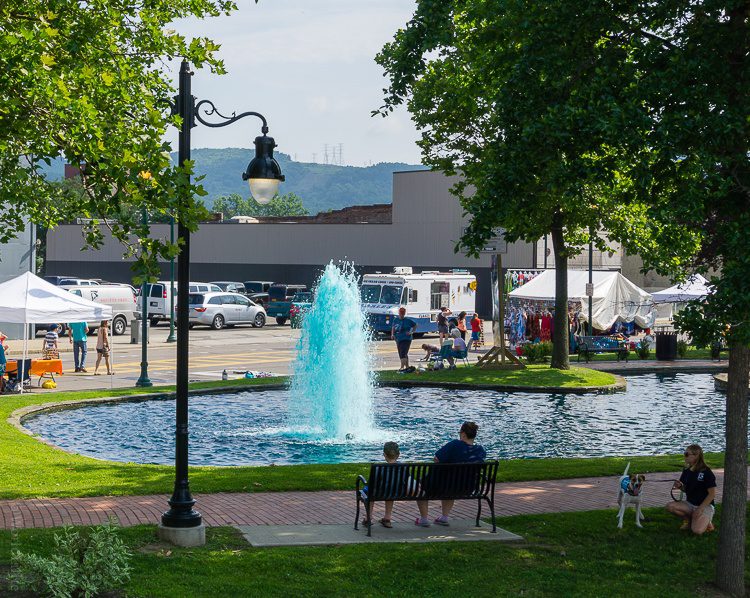 But John Jones’s remarkable story doesn’t stop there. In the late 1800s, there was a prison camp in Elmira for captured Confederate soldiers. Despite his traumatic past in the South, Jones took it upon himself to meticulously bury 2,973 Confederate soldiers who died while in the camp.

He took time to mark each grave, and carefully storing each person’s belongings for the families to pick up when they could. He even cared for and sent home the body of his former overseer’s son, who passed away while in the prison camp! 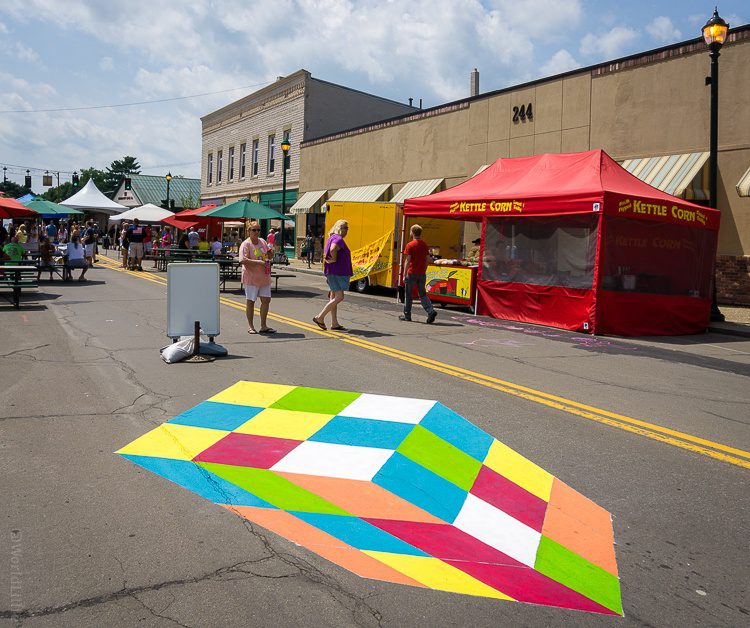 In 1877, the U.S. government acknowledged Jones’s work by declaring the burial ground a national cemetery. I don’t know about you, but I find this story incredibly moving. Despite being enslaved by people from the South, Jones treated them — and their families — with dignity and honor. 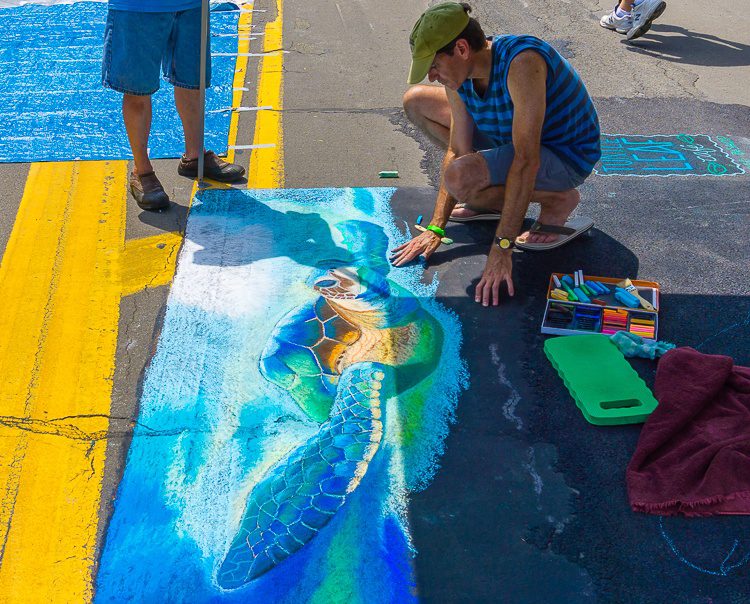 In more recent history, did you know that fashion designer, Tommy Hilfiger, was born in Elmira, New York? So was the news anchor Brian Williams. But now, let us move on to our traveling toddler‘s favorite part of our visit to the town: ANIMALS. 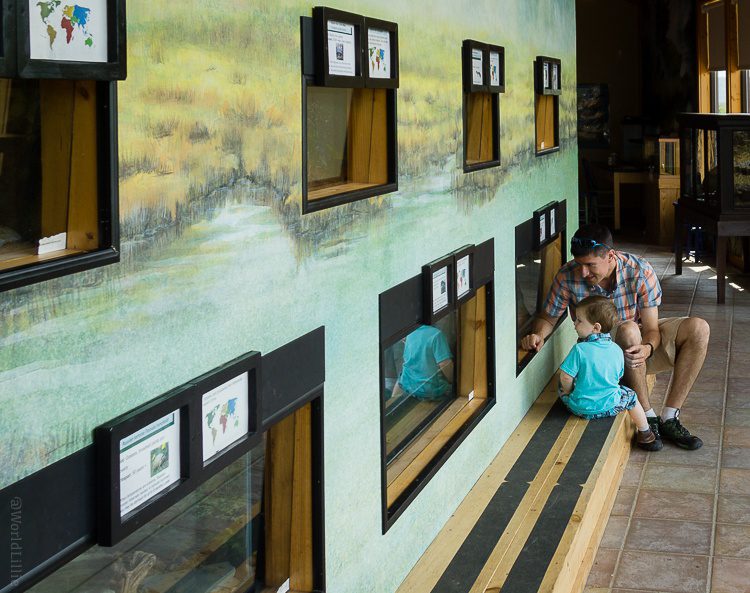 A Nature Center for All Ages

The Tanglewood Nature Center has an excellent combination of indoor and outdoor animal sightings. Even though it was raining when we visited, there were plenty of critters inside to make our visit worthwhile. For starters, check out this hulk of a turtle! 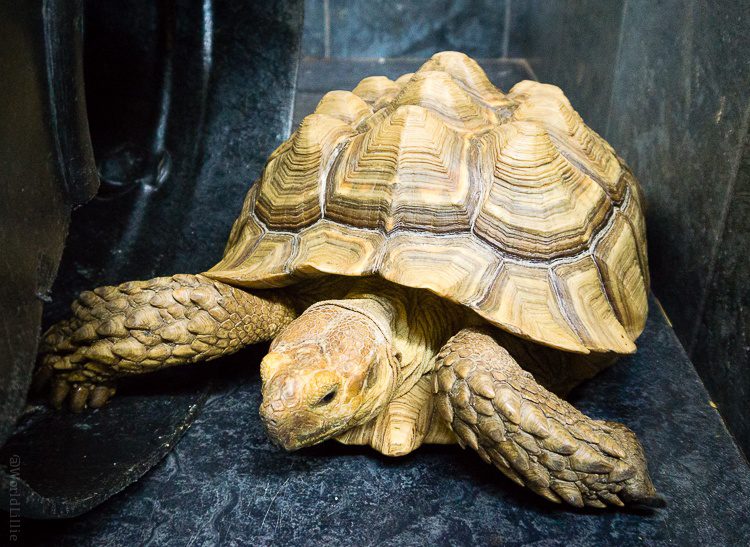 Giant turtle at the nature center!

The nature center can also provide you with priceless photos thanks to the stuffed bear and wolf (see the photo below and at the start of this article) that Devi couldn’t get enough of. Now we just have to teach him not to cozy up to a LIVE beasts after this fuzzy bonding experience. 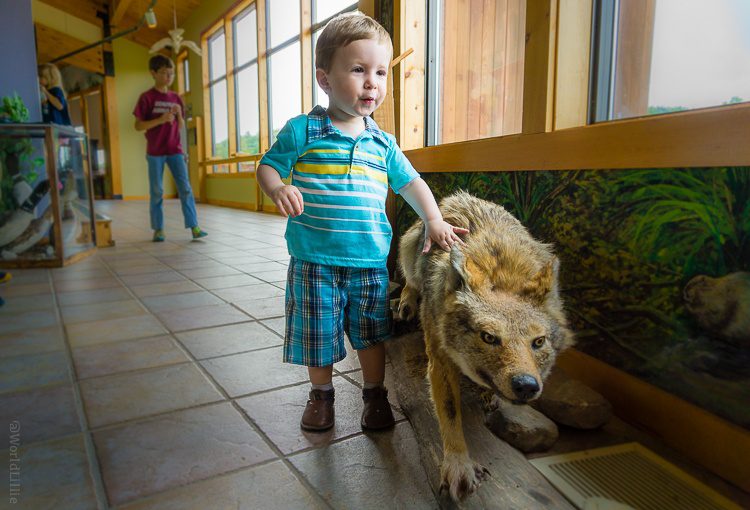 Our little guy made some… interesting new friends.

So, where to stay in Elmira? We had a truly nice experience at the Holiday Inn Elmira (click here to see current rates and availability). I hadn’t stayed in a Holiday Inn in years, but was floored by the quality of the room, service, and hot breakfast since the brand’s reinvention of itself. For affordability, comfort, and convenience, that hotel is a perfect option. 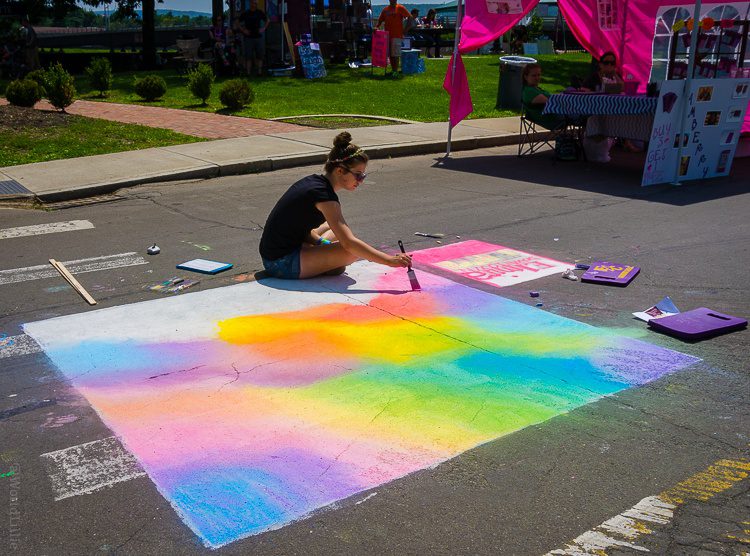 In sum, Elmira provided a historically fascinating and geographically strategic base for our Finger Lakes adventure, and I’m now eager to return to the region to explore its other corners. And what about you? Have you traveled in or around Elmira? Would you like to? Do share!

Enjoy this article? Trip planning? To save you time, I did the search already, so just click here for Finger Lakes hotel deals, and here for beautiful Finger Lakes vacation rentals. These affiliates provide a small commission no extra cost to you, so thanks in advance, and happy travels!

We were guests of Finger Lakes Wine Country, but all opinions and bear cuddles are my own.

wow, There's a lot of places to visit in NY but Elmira, I think it's the best destination for those who love to paint. Even kids would enjoy this place.

Eileen Collins, the first woman space shuttle commander, was also born and raised in Elmira. And don't forget to check out the National Soaring Museum at Harris Hill,

Thank you for pointing out the historic and present places in Elmira, Corning and the Finger Lakes. Elmira also boasts Ernie Davis, the first black Heisman trophy winner who was drafted by the Cleveland Browns. He contracted Leukemia and sadly died before playing for the Browns. Another prominate man who was born in Elmira and is buried in Woodlawn Cemetery is Hal Roach, creator of the Little Rascals (Our Gang) and several early TV shows He was a pioneer in the film industry.

Thank you for adding these interesting and important facts!

What a colorful town. Growing up in New York I heard of Elmira but we never visited. Loved all the sidewalk art.