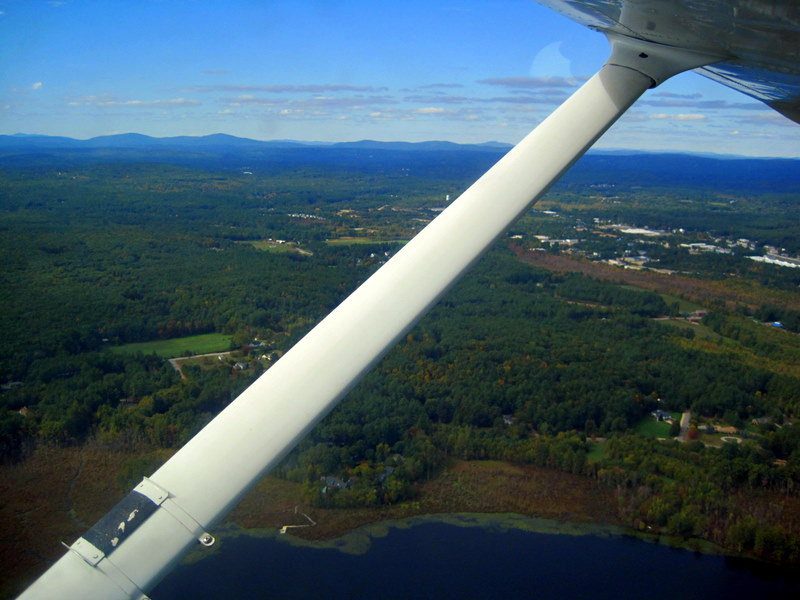 My suitor, Colin, told me he had a surprise activity for Sunday, and, like a fool, I thought it would be something tame like a stroll through the woods, or a tranquil boat ride. In retrospect, how naive I was!

The car was chugging North to New Hampshire when Colin turned towards me.

“I probably should tell you now what the activity is,” he said.

My innocent eyes were sparkling with youthful excitement. “Oh do tell!” I squealed. “Is it a pretty hot air balloon ride? Is it a trot on a pony?”

“Well…” said Colin, as we turned a corner in the road, “I got this Groupon discount for one of my lifelong dreams…” Around this moment I got the sinking feeling that it was going to be something extreme and ridiculous. He continued: “…and I just had to take the opportunity.” 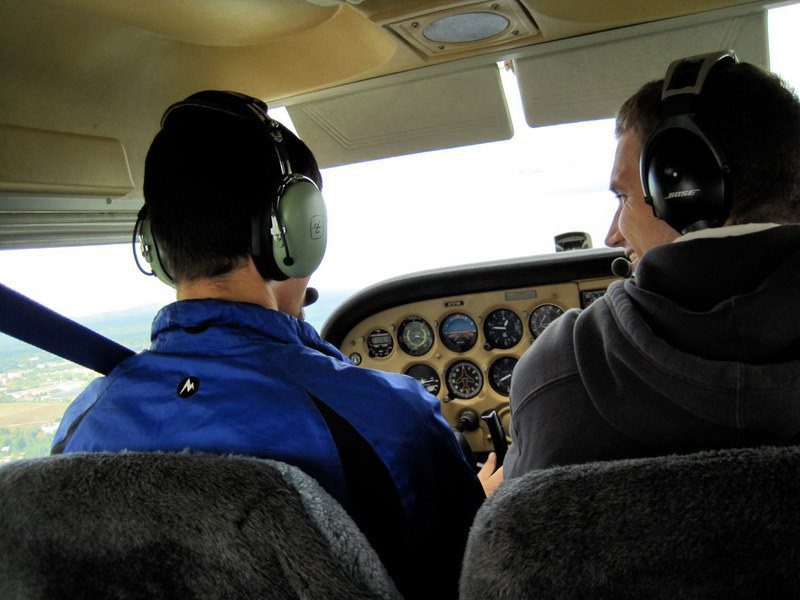 High in the air, the instructor guided Colin

A freakishly tiny airplane crossed the sky in front of us, and Colin took a deep breath, then blurted out: “You’re going to be with me on my first flying lesson!”

At this point I either vomited or passed out or some combination of the two. “NOOO!” I shrieked, “That is at the top of my list of things I said I would NEVER do. That is WAY too dangerous!”

“I’m thinking of this as an opportunity to say NO FREAKING WAY!” I screamed, feeling a fresh wave of nausea as another impossibly small plane swooped shakily overhead. “This is the worst idea ever! I’m going to sit on the ground and sulk and play with my phone while you do your thing, you freak!” 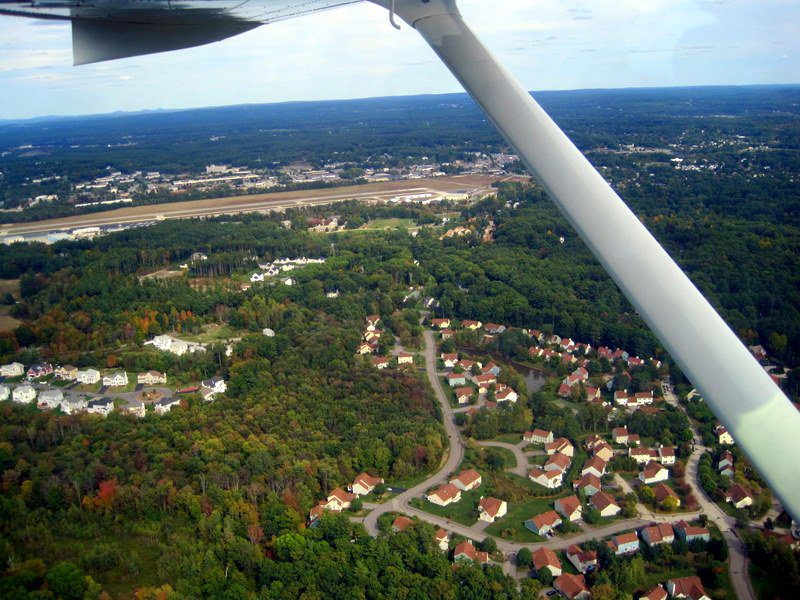 Oh, those tiny houses down below!

“Fine,” said Colin, “but you should at least come to the initial training session in the offices with me.”

“Whatever,” I grumbled. “Just as long as I stay out of those flying death traps.”

We arrived at Flight International Academy, which turned out to be in a veritable village of assorted flight schools.

There was a giant runway network behind it, coated to the brim with baby plane-lings (almost as small as dumplings, but with the capacity to fly… supposedly). 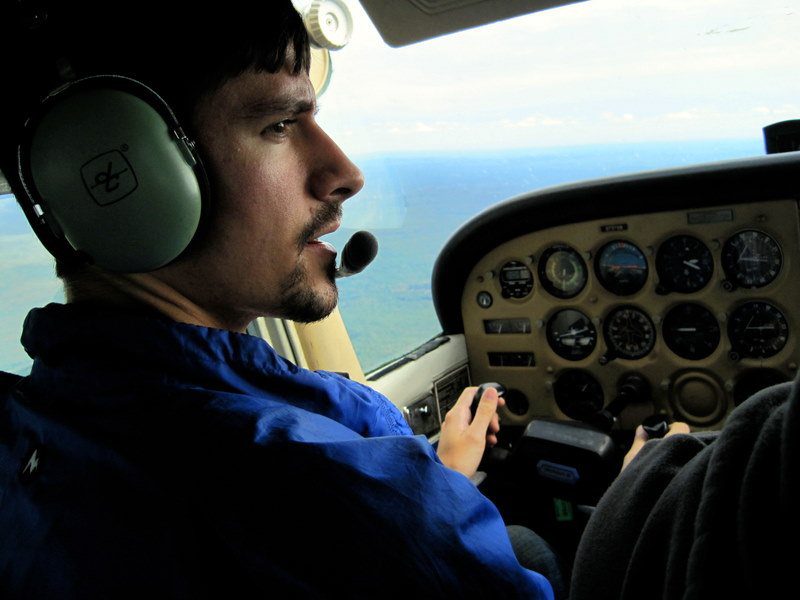 Colin looks very intense as he steers us.

The door to the flight school opened and the soft aroma of coffee greeted us… along with a display of barf bags for sale.

“Hello there!” said the receptionist in a manner far too calm for such a life-or-death situation. “Are you here for the one o’clock lesson?”

“I am!” said Colin in a manner far too cheerful for the somber occasion.

“Excellent,” chimed in another man. “My name is Nick and I will be your instructor. How are you doing today?” 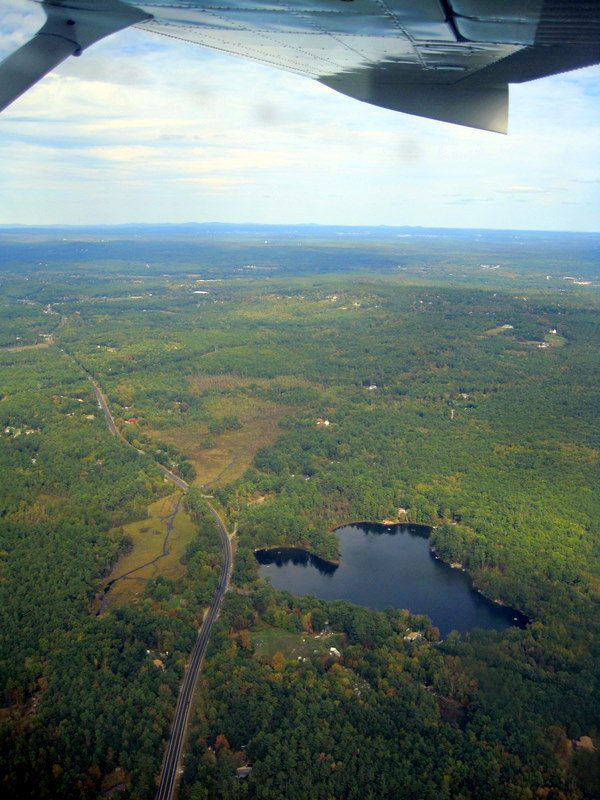 “FREAKING OUT,” I growled.

Nick assured me that I could sit in on the pre-flight instruction, and then make an informed decision after the on-the-ground lesson.

At this point I was freaking out so freaking much that words failed me. I just nodded and followed the men to the classroom.

There was a short lesson involving a four-inch-long model plane, some vocabulary words on a white board, and then a brief walk-through on a fancy walk-in flight simulator.

Throughout all this I was pondering the following questions: Would this instructor kill me? Would he kill my friend? Would he, in fact, crash the plane in such a way as to kill everyone in Nashua?

After the on-the-ground lesson, I gleaned the following facts:

• Nick had been a Navy pilot for many years, and a flight instructor for many more. “There’s not much I haven’t seen and can’t fix,” he told us. 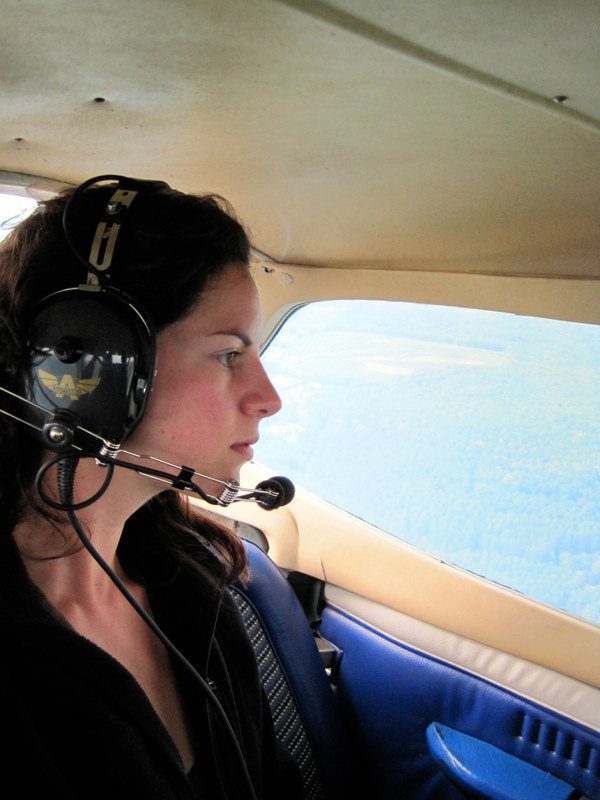 Trying to remember to breathe…

• The flight school was busy and successful, and none of the planes outside appeared to be crashing.

• Everyone in the office seemed calm, smart, and confident that death would not occur.

• There were some Physics facts about how the planes were essentially gliders, so even without power, instead of crashing they would glide slowly to the ground.

• Nick explained that the planes are like Driver’s Ed cars: The Instructor has a second “steering wheel” and set of brakes/instruments which are linked tightly to the novice’s. If the novice starts to make a mistake, the Instructor can easily correct it with a touch of his instruments.

We walked outside to the plane. I think it was named something like “Poof Poof” or “Popsicle.”

The world was swimming before my eyes now as the moment of reckoning neared.

Nick took us both around to each part of the plane, testing its function and explaining the physics and safety features behind each little flap and curve. 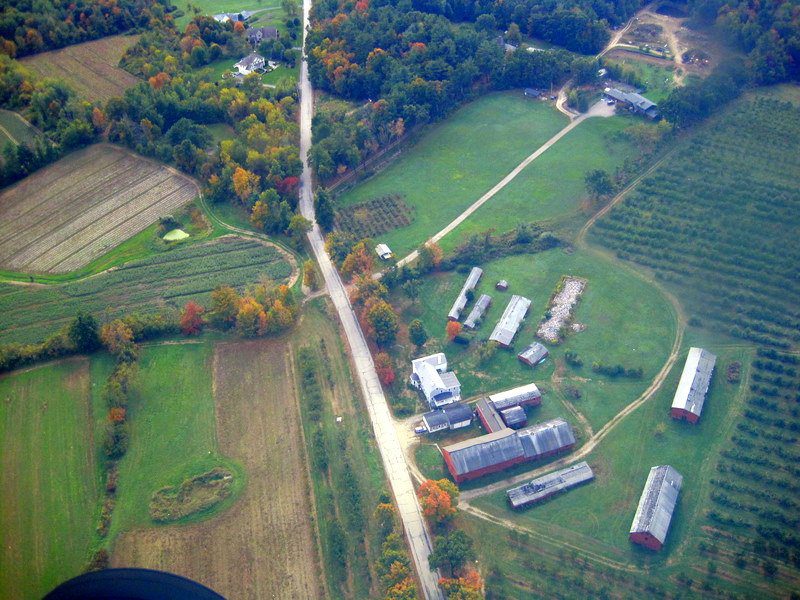 We begin the descent to land…

At one point the men got extremely excited about some Physics principle of air and lift that (excuse the pun) blew right past me. I was happy to see my friend so excited, and amused at the joy with which they geeked out to Science. Indeed, what genius those folks who created the means for us to fly had! It is truly remarkable.

Nick turned towards me and said: “We’re about to leave. Are you coming? Remember: you can either come or stay, but once we leave, we can’t turn around and get you.”

At this point I had made my decision. The calculations added up. I strode towards the baby blue plane and grunted, “YEAH.” 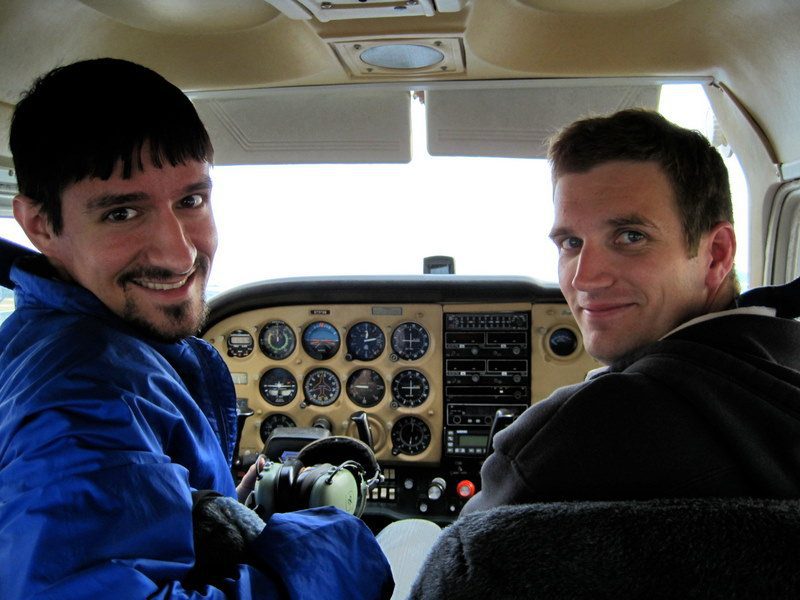 A successful landing! So happy!

The next half hour was, shockingly, both delightful and startlingly non-scary. Wow!

Colin’s a calm dude, and Nick is a great instructor. Our takeoff was smooth (“Holy heaven,” I gasped to myself, “my friend has caused us to levitate! We are in the air!!!”), and WOW: what a gift to look down upon the gently receding houses and green tufted trees!

Gaze at these photos… it was, to be honest, incredible.

There was no turbulence, and everything was steadier than driving in a car. Nick would periodically give calm, clear directions to Colin, who would smoothly carry them out. 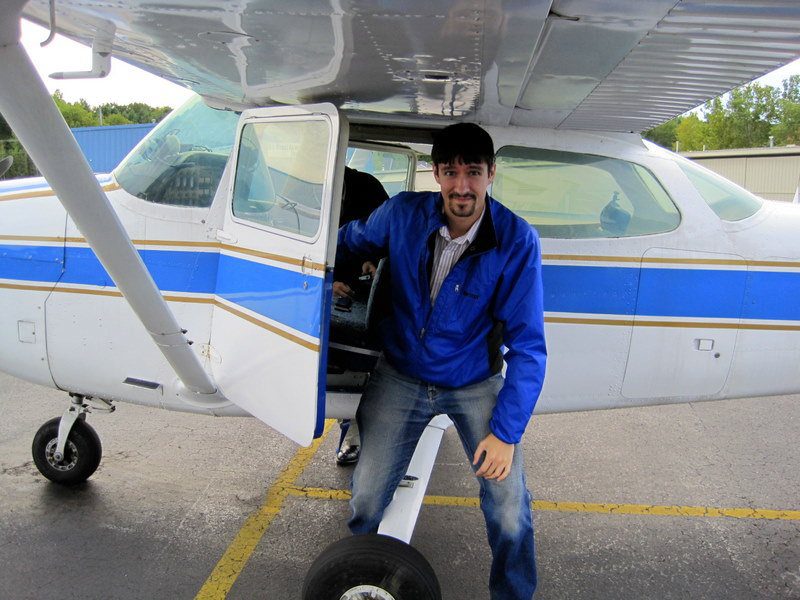 At a certain point we could supposedly see Boston (with a parachutist in the foreground), but I was too busy snapping photos of the heart-shaped lake far below to actually see my city. (Fast forwarding many years later, who knew we would be vacationing on Seneca Lake in NY, pregnant with our second child???)

In what seemed like no time, we began our descent.

Nick guided Colin verbally and with his linked steering instruments, and… miraculously, soft as a kiss on a baby’s cheek… we soon found ourselves safely back on the runway. Yes!

“Okay,” I said grudgingly, “actually that was a really cool idea, not a stupid one.”

By this time, Colin was too high off pride and happiness to say much of anything but give me a big hug. 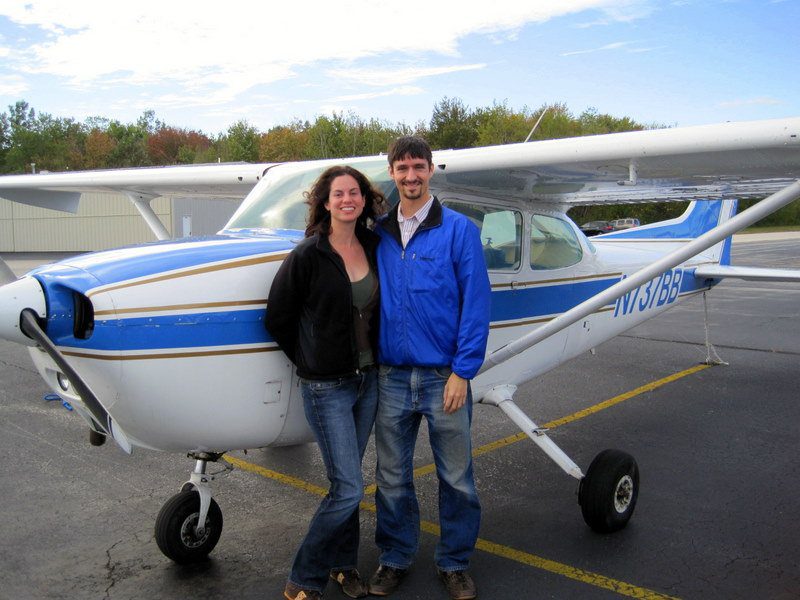 For the rest of the day we kept turning to each other with big grins to squeal: “We FLEW today! We FLEW!”

When I returned home, a friend had left a message under my Facebook post about flying, saying: “You really just say “Yes” to everything, don’t you!”

“Um, no,” I replied. This one took a lot of thought and calculation!

Colin and I are both teachers, and I have to admit, there’s something super cool about going in to your regular teaching job and thinking all the while… “We FLEW yesterday!”

2012 update: Colin and I are now married. I guess that date worked!

What a great date idea! Well done Colin! You two look so cute together!

Good post ! remenber my flight on a tri-motor ford

Ms. Marshall I think you are brave to take that amazing and frightening opportunity. If it was up to me, I wouldn't car if that was a good friendour not, I'll trust the professional with the flying and my life, I would of prayed as soon as I got on... But very interesting, i want to "fly a plane" ;)

You must be so brave to take this chance and fly on a small plane! If that was me, I think that I would pass out and die on the plane. I am extremely afraid of heights and would never do something like this, props to you! You're courageous!

Did this happen in New Hampshire or Boston? If your six feet and your friend is taller than you how tall is he. He's taller than the plane that's cool!!!!!!!!!!!