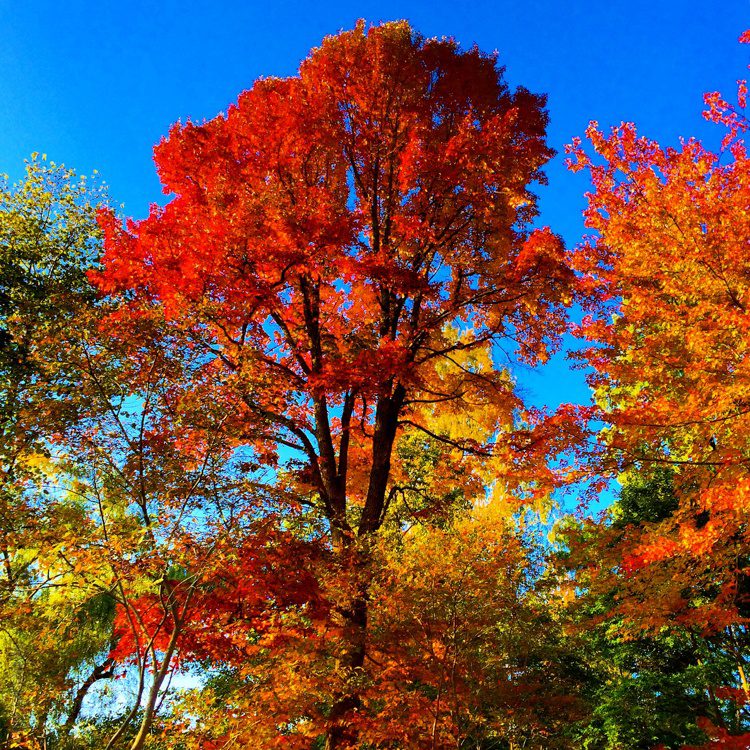 This spot is perfect to see the autumn glory of New England.

Boston’s largest public park is rarely known by visitors, so allow me to let you in on the secret:

Franklin Park is a 527-acre green-space with activities galore! 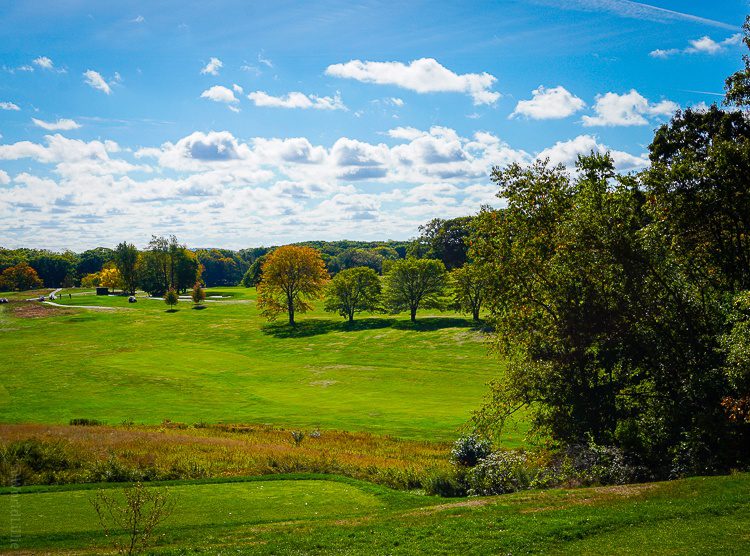 Franklin Park’s golf course used to be a sheep meadow.

Olmsted crafted this glorious green space is the final piece of Boston’s Emerald Necklace park system: a ribbon of green encompassing other gems like Jamaica Pond and the Arnold Arboretum.

Franklin Park is considered by experts to be the crown jewel of all of Olmsted’s works, surpassing even NYC’s Central Park (scandalous!), because it so perfectly embraces a visitor in nature. 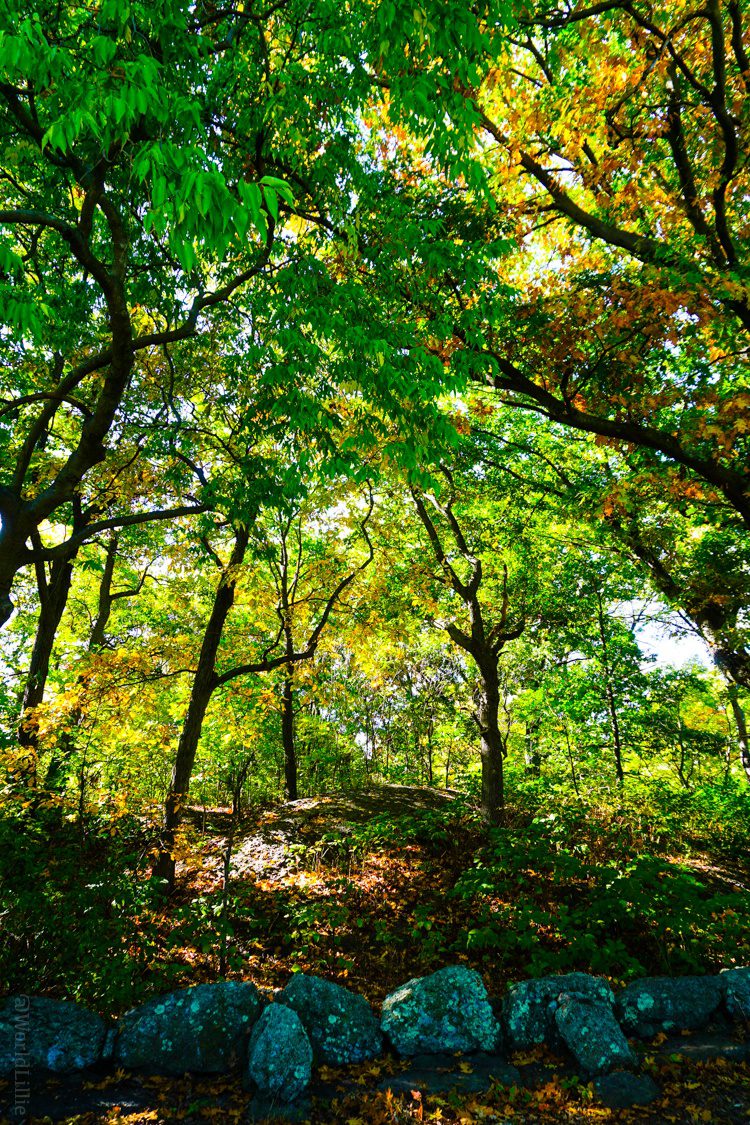 Do you feel embraced in nature? I sure do.

The green-space so big that it spans three of Boston’s neighborhoods: Jamaica Plain, Roxbury, and Dorchester. Despite its historical importance, the park was neglected for decades, but is now experiencing a resurgence thanks to efforts of the Franklin Park Coalition, the Emerald Necklace Conservancy, and a sizable new grant. 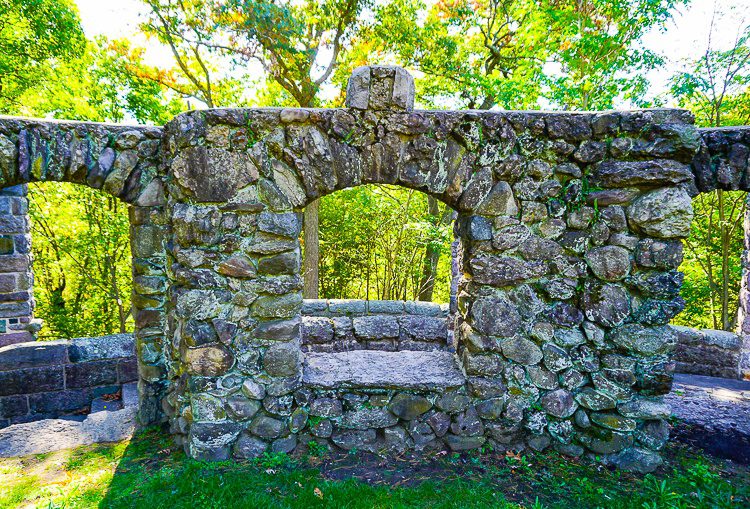 The magical ruins in Franklin Park:

Indeed, part of Franklin Park’s charm lies in its layers of history. Throughout the park, mystical-looking ruins abound. If you’re into artistic photo shoots, these spots are ideal. If only I’d been wearing a flowing skirt, I would have climbed atop an arch and let that skirt billow in the wind while a camera snapped!

It’s funny to me that my previous article is about ancient Greek and Roman ruins in Ephesus, Turkey, but here are some Boston-based ruins (albeit much more recently “ruined”) just down the street from my house!

My son and his friend at the zoo’s carousel.

For many families, Franklin Park Zoo is the biggest draw.

This zoo has been a favorite since its creation in 1912. I hadn’t been to Franklin Park Zoo in decades, so to research this article, I took my son and friends last week. What a heavenly day we had! I don’t know who was more excited about the giraffes, lions, and tigers… my toddler or me!

To save money on admission, you can (if you’re local) check a pass out of the library or buy a family membership, or (if you’re visiting and/or sightseeing) look into discount bulk admission packages, which cut prices by bundling multiple attractions. 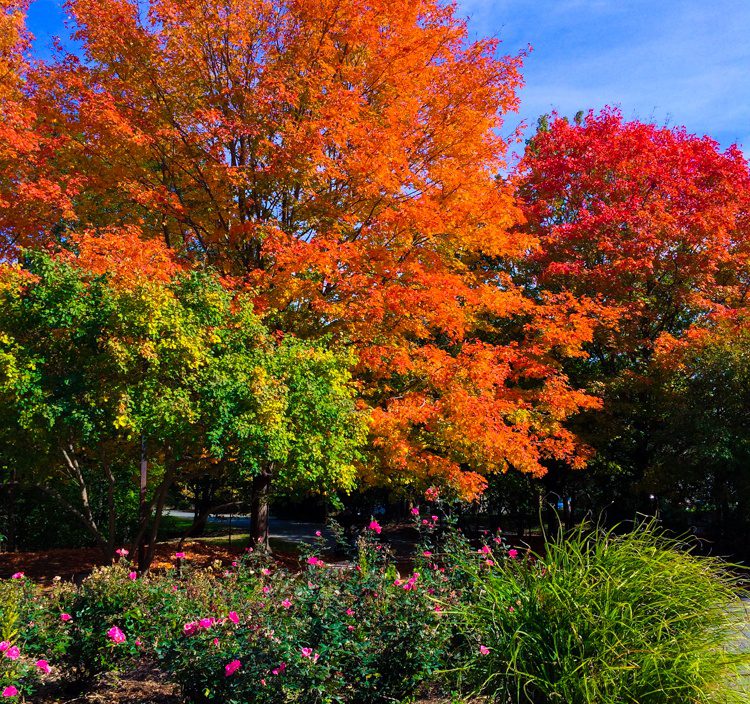 I didn’t get any actual photos of the animals because I was so excited to just stare at them — WOW, are zebras ever pretty! My son loved the tigers best, although the inanimate animal statues on the carousel also caught his fancy.

Me, I was in awe of the giraffes. How is it possible for necks to be that long?! 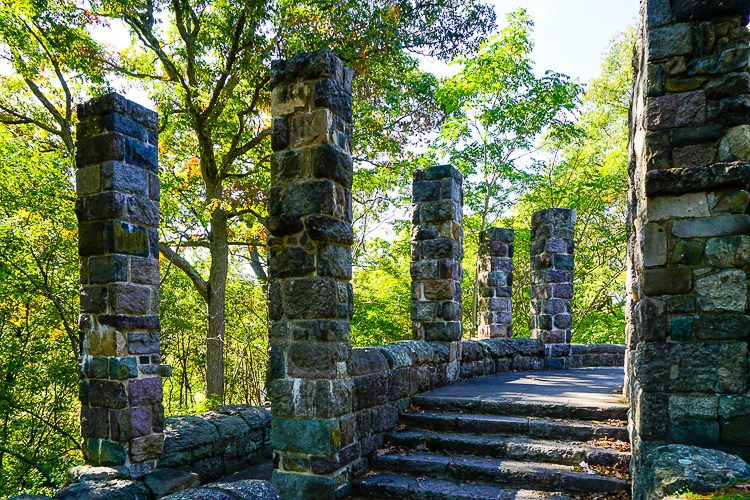 Find this structure on Schoolmaster Hill.

Speaking of staring, my absolute favorite part of Franklin Park was gaping at the autumn leaves, which near their apex by mid October. My favorite New England fall moments are when I can see an entire rainbow in one gaze: red, orange, yellow, green, AND blue! Check it out in the photo below. 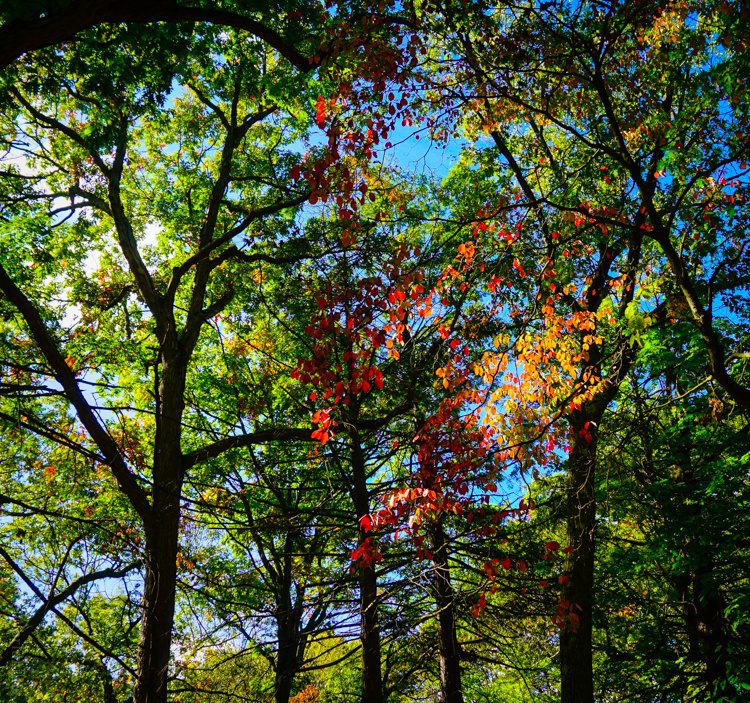 The forest becomes a stained glass window in autumn.

What about accessibility at Franklin Park?

Don’t worry — there are plenty of paved paths (for strollers, bikes, and wheelchairs) but there are also an abundance of meandering unpaved paths if that’s more your scene. See? Something for everyone. 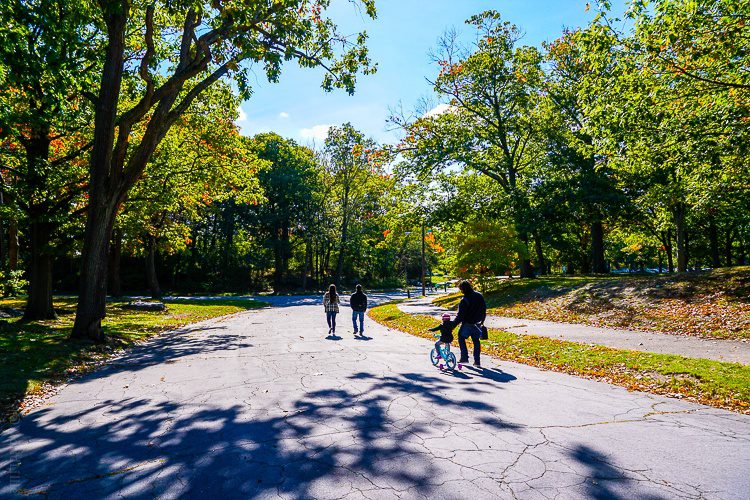 The paved paths of the park are ideal for bikes and strollers.

A brilliant detail about Olmsted’s design style is evident in the photo above: Olmsted wanted his park-goers to feel like they were in the middle of nature, even though the city lurked just beyond the trees. Therefore, he believed paths should never have a straight line of vision.

Instead, he designed all his parks’ walking routes to curve alluringly so that the wanderer would be curious about what lay around the bend, and thus keep walking! Sort of the “playing hard to get” game of green-space design. And it works! (Interestingly, Bend, Oregon was designed by different people, but has a similar feel at Drake Park and the Deschutes River.) 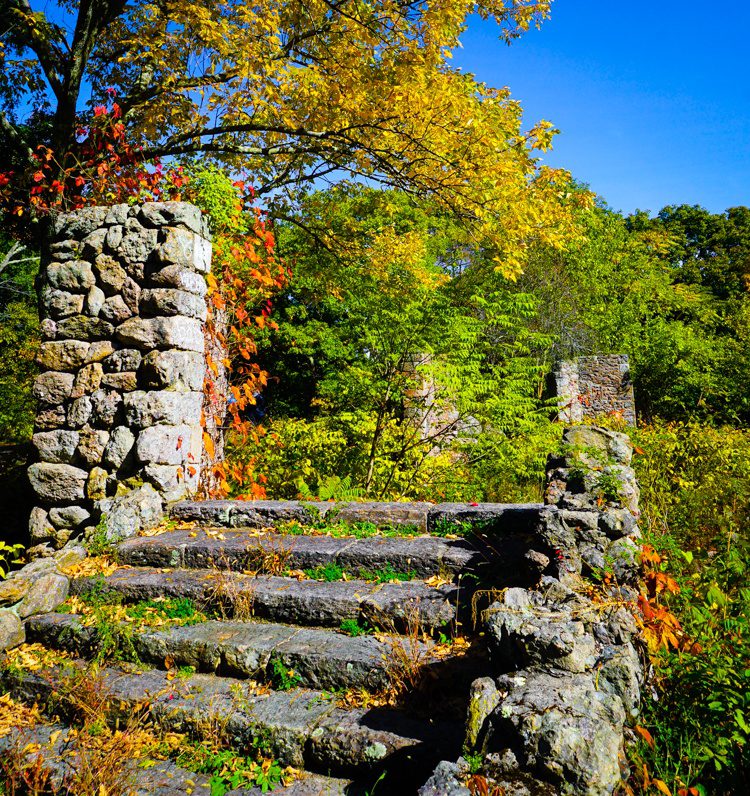 Stairs to nowhere: Ruins in the park.

Franklin Park’s connection with the arts and African American history:

Franklin Park is so big that its features go on and on. Above, you can see the ruins of Overlook Shelter where, in the 1960s, a concert venue called the Elma Lewis Playhouse thrived, with luminaries like Duke Ellington performing outdoor concerts for as many as 100,000 people! 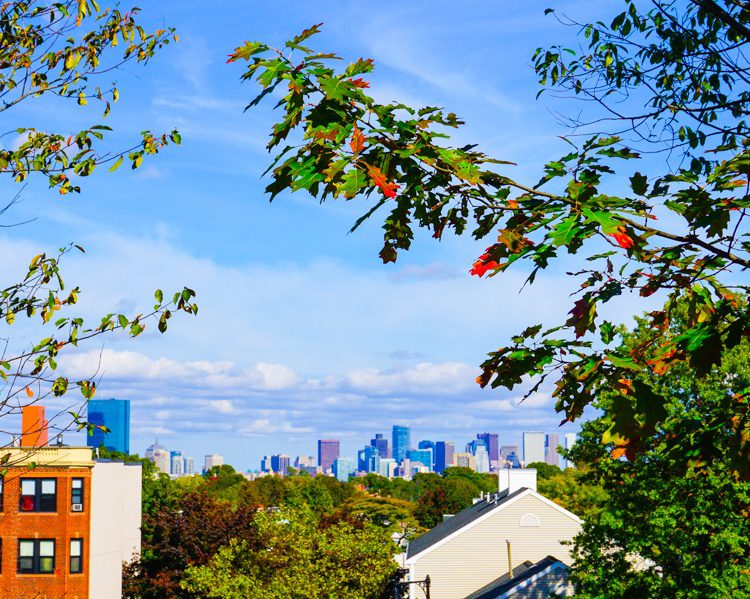 A view of downtown Boston from Franklin Park.

The history of Ms. Elma Lewis’s contributions to Boston’s arts and African-American community are deeply inspiring. Events are still held in the playhouse, and in many other parts of the park, too. Scope out the full Franklin Park events schedule here on the FPC website. There’s even Turkey Trot near Thanksgiving. 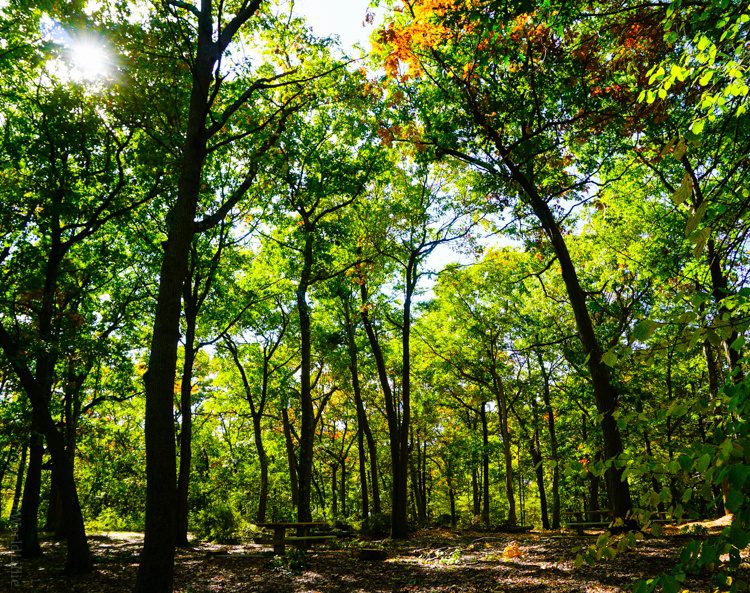 See the tiny picnic benches below the trees?

I cannot let this article end without exclaiming: there are crazy abandoned Bear Dens in a forested section of the park called Long Crouch Woods! When we stumbled across the dens, a photographer was setting up for a model’s photo shoot. What better place to show off dramatic clothes than inside the cages where giant bears used to prowl? 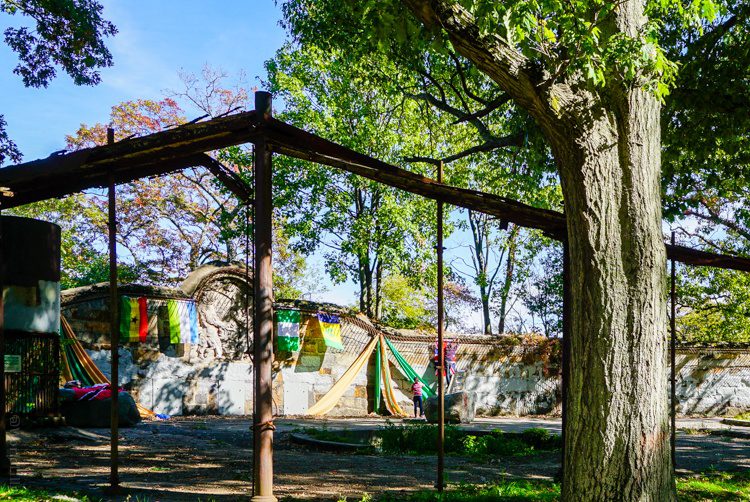 The abandoned Bear Dens, decked out for a modeling shoot.

Other notable elements in the park (find them on this map) include: 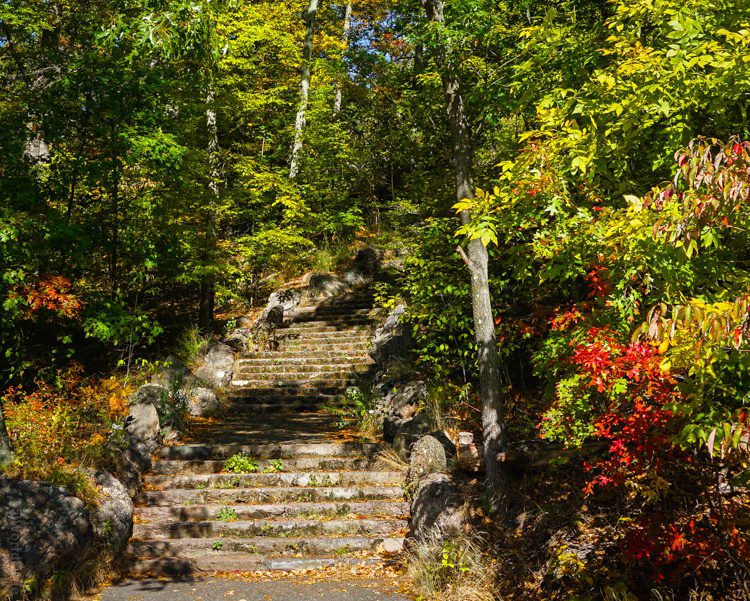 Yaaaay for Franklin Park, and for the people who help it be great!

So what do YOU think? If you’ve been to Franklin Park, what would you add from your experience? If you haven’t been there yet, what thoughts or questions do you have? Do share! 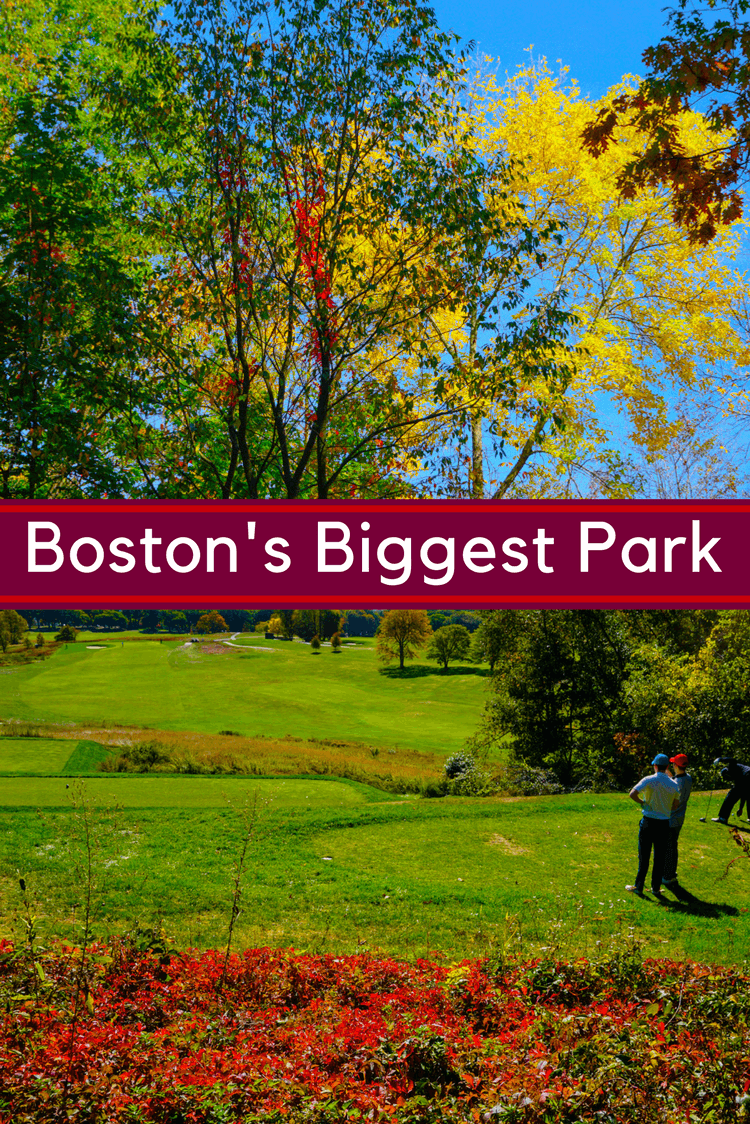 Travel planning for Boston or beyond? Use this easy Boston hotel search link for deals. Affiliates in this article save you money while providing a small commission, at no cost to you. Happy exploring!

Wonder what happened to the bears? Well, whenever I get to Boston I will need to put that park on my list. Preferably in the Fall!

This park sounds fabulous! And it looks like fall might be the perfect time to visit Boston!!

Autumn is the BEST in New England!

I just can't get over the incredible colours in these autumnal photos! This really does look like the most perfect park that would take years to fully explore. My kids would, obviously, make a beeline for the zoo :)

Oh how this post makes me miss the northeast even more than I do at this time of the year!! Stunning photos of trees ablaze in color! WOW!! And who would have thought that Boston had ruins of its own. Love the "recent" ruins as much as the ones from millennia ago.

What a gorgeous place! I love it when cities keep space for green areas - it's one of the most important things we can do: be outside!

Preserving greenspace is the biggest gift city planners can give us, and it's a worthwhile investment since green cities are livable cities, meaning residents will be more likely to stay and contribute to the town!