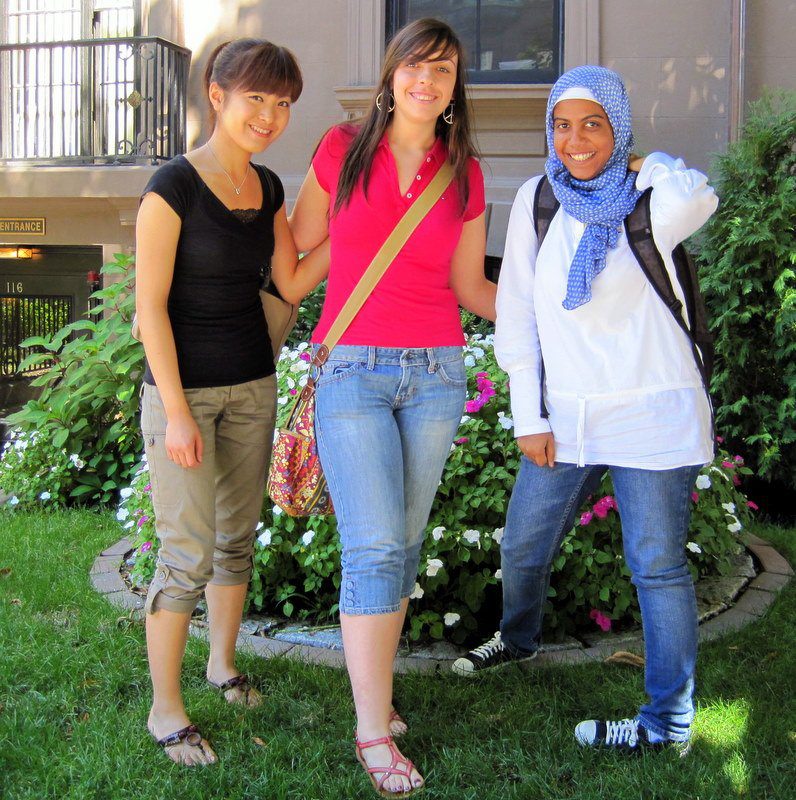 The three lovely international students in this story

The world’s relationship with Muslim culture is one of the most intense and important topics around these days.

And thus it is with joy and hope for all humanity that I bring you an absolutely beautiful story from last week in our multicultural ESL class.

Let us allow the story to unfold through the words and pictures of three women in our class: Mafer from Venezuela, Yuri from Japan, and Meaad from Saudi Arabia.

By Mafer, from Venezuela: Before coming to Boston, I disagreed about the idea that Muslim girls have to use scarves on their heads, mostly because I thought that it was a rule with no choice.

But then once I joined our language school in Boston, I got to know Fatima and Meaad from Saudi Arabia. They told me that it was their decision, and they wear headscarves because they want to, not because they are obligated to do it.

Yuri, Meaad, and Mafer on the day of this tale

I like to keep my mind open to new things and learn as much as I can about other people. Last week I brought a scarf to school because the weather was very cold, but when I entered the classroom, I felt hot and I took it off.

I don’t know why, but suddenly I wanted to learn how to put on a scarf like a Muslim woman! So I asked Meaad if she could teach me how, and she did.

I wore the scarf all day to know how it felt and to see if made me too hot. But was ok! It was not as hot as I thought.

When Yuri (a friend and classmate from Japan) saw Meaad putting the scarf on me, she asked Meaad to do the same for her. It turned out Yuri had a scarf in her bag, too!

I am very happy to be able to learn so much about other cultures and I am always asking other students questions about their religion, though sometimes they laugh at me because my questions are so much. A few days ago, I asked Fatima to read me their holy book, the Koran. It sounds like singing. 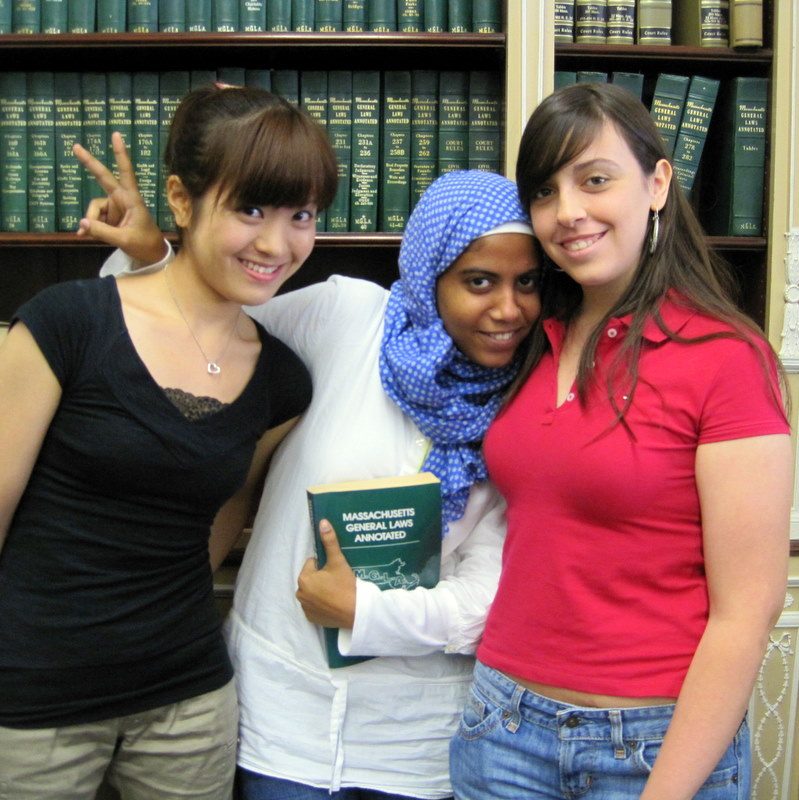 Such studious, kind, and world-minded women

By Yuri from Japan: The day you see in these photos, Mafer and I learned from Meaad. I had never worn scarf on my hair, but I was interested in Islamic culture and I wondered why Muslim women cover their hair.

My classmate Meaad, who is my first friend from Saudi-Arabia, helped me put on a scarf when I asked her if she would.

I am an unbeliever, but that day I felt something holy.

Because I now live in America, I meet many people who have different religions, and I like to understand and respect other cultures.

By Meaad from Saudi Arabia: “I want to wear a scarf!” said Mafer to me. I was so surprised when my friends Mafer and Yuri told me they wanted to wear a headscarf. A scarf, or like we say in Arabic, a “Hejab,” is an important Muslim tradition.

Living and studying English in Boston, I have made friends from different countries and different cultures. We’ve spent good times together and have shared our backgrounds.

May we learn from the openness of these students!

When I came to school on that day, I found my friend Mafer had brought a scarf! She asked me to help her put it on.

When I wrapped the scarf on her head, she was excited and happy. Then Yuri asked me to put her scarf on, too.

We were excited and fascinated and took so many pictures. My friends spent the entire day with scarves on. It was such an interesting day, that day when they shared my culture.

Now, I want soon to try to wear kimonos from Yuri’s culture, and traditional Venzuelan clothes from Mafer’s!

Lillie’s Note: Please do leave a comment for these wonderful women. Headscarves can be a very heated topic of debate, but let’s really embrace the positive power of this story!

Lovely article and demystifying the scarf! A big Thanks to these lovely ladies to try it out, to have their fun and share their experience. Lv to them! And thanx to you, for sharing this article :)

Thanks for reading and commenting!

This is a wonderful article to use in conjunction with the documentary "Halil's Hair" and Fatema Mernissis articlke "Size 6" to get students to see how a seemingly autocratic ideal can be celebrated by those whom it purportedly oppresses. My students loved it.

I like this article because it shows appreciation of cultures from diverse people.

Diversity is very cool. My friend Fatuma is from Kenya and she taught me how to put on a scarf once, but i felt like i was suffocating so i took it off. She says she does not have a choice she has to wear one. I would like the option to wear one when i am lazy, like those days i just do not comb my hair or when i am having a bad hair day. Fatuma also told me that they make great camouflages in public when you want to avoid someone.

I see girls wear hejabs around school all the time. It really distinguishes them. I remember I had a Syrian friend. I met her in 2nd grade, then I ran into her at the grocery store, she was about 14 years old. She wore a hejab. I couldn't really tell it was her at first. After reading about the Korean and Italian article, I compared and contrasted these two articles. It made me realize that Muslims are really conservative. I couldn't imagine not being able to show my hair in public for the rest of my life! It seems like Muslim women have to make more life style changes than Muslim men.