See the hometown of Fred Rogers in Pennsylvania!

Mister Rogers’ Neighborhood was a beautiful part of my childhood, and it’s been a delight to see my own children rapt at Fred’s show. Much was my excitement, then, in realizing that there is an entire historic Fred Rogers Trail that YOU can explore in southwestern Pennsylvania!

Just 40 miles southeast of Pittsburgh, PA sits the small town of Latrobe. Rogers was born in 1928 in this spot, and lived there through high school before moving to Pittsburgh to produce his show. Today, Latrobe houses many elements of the Fred Rogers Trail. Let’s check it out…

Of all the Latrobe sites for Mister Rogers, the official Fred Rogers Center is the one you can’t miss. Why? Because in addition to informational displays, it houses Fred’s actual cardigans, sneakers, Neighborhood Trolley, and most importantly… the puppets!

See the Daniel Tiger and King Friday Puppets, and MORE!

Seeing the real Mister Rogers puppets in person took my breath away. I’d spent so many years watching them do their thing on a screen, that to be able to just stare at their fur or robes up close was hypnotic. I realized, gazing at those little faces, just how much little me had memorized each line of their features — from the big cheeks of Prince Tuesday to the maroon nose of Lady Elaine.

Can We Discuss Lady Elaine Fairchilde?

As a child, Lady Elaine terrified me. She was ornery, selfish, a troublemaker, and had this face which looked like it was rotting or burning from the inside. Much was my surprise, therefore, to learn in the  fabulous Mister Rogers documentary, (Amazon affiliate links in this article provide a small commission upon purchase at no extra cost to you) Won’t You be My Neighbor, that Lady Elaine was based on… Fred’s own sister!!!

Was Fred Being Rude to His Sister?

For someone as kind-hearted as Mr. Rogers, it seems a bit of a rude thing to do to base such a wild puppet on a family member, but based on the sister’s on-camera statements in the documentary (and laughter), she didn’t seem to mind.

Maybe she recognized the importance in every narrative structure of having a powerful antagonist, or at least a person who shouted the other side of what the king said. As an English teacher, my favorite part of Lady Elaine is the irony of making her last name “Fairchilde,” as she’s usually not a “fair child” in her actions at all!

The Evolution of Characters in Daniel Tiger’s Neighborhood

If you have a small child or have spent any time with them, you’re likely familiar with the wonderful cartoon, Daniel Tiger’s Neighborhood. The creators of this show have kept Fred’s kind, slow-paced vibe (thank goodness!) but have evolved the puppet characters in funny ways.

For example Lady Elaine got a stylish husband in Music Man Stan, somehow cured her magenta nose and cheeks, and gave birth to Miss Elaina — the spirited classmate and friend of Daniel Tiger who calls everyone “Toots” just as her mother’s namesake did.

The Mister Rogers Statue in Latrobe

Moving on to other spots on the Fred Rogers Trail in Latrobe, don’t miss the Mr. Rogers statue on a bench in James H. Rogers Park in town. There is also a Fred Rogers statue in Pittsburgh, but this one is notable for how it welcomes you to snuggle close. Very fitting for someone who for many of us feels like an old family friend.

Latrobe is a very interesting small town which is undergoing some changes and renovations, but I was struck by two buildings in particular with unique and delicious architectural features. Chief among them was Mozart Hall, pictured below, which boasts onion domes!

Where the Banana Split was Invented!

Sure, Latrobe is the birthplace of Mr. Rogers, but did you know it’s also where the delectable banana split dessert was officially dreamed up, way back in 1904? It’s not every day a person shares a hometown with a dessert.

For those of you who enjoy silly poses with larger-than-life statues, there is indeed a banana split photo opportunity downtown on the street-corner where the original pharmacy stood: 805 Ligonier St. There are various places around town to get a real banana split in your mouth, but please do not attempt to eat the statue.

Check out the Latrobe Art Center

Close to the banana split statue sits the Latrobe Art Center which is worth a visit for their gallery displays, creative classes, Mister Rogers souvenirs to buy or pose with, and snacks. (Yes, they serve banana splits!)

The Rest of the Fred Rogers Trail

Intrigued by this taste of Mister Rogers history? There’s a lot more to the Fred Rogers Trail that we didn’t even get to, including a slew of sites in Pittsburgh, too! See the full listing here. Of particular interest if you’re traveling with kids might be the Idlewild & Soak Zone water amusement park.

Where to Stay Near Latrobe, PA

If you’re in the Laurel Highlands and looking for a hotel near Latrobe, I highly recommend the town just 10 miles southeast, Ligonier, PA, which is extremely visitor-friendly, enjoyable — and frankly, adorable. We stayed at Thistledown at Seger House.

Thistledown has beautiful stained glass and chandeliers… even in our bathroom! See my full write-up of the Ligonier hotel here.

If your creative inspiration is fired up from seeing the mind of Fred Rogers at work, check out my round-up of 40 drawing prompts from around the world — which features this museum!

What is YOUR Experience with Mister Rogers’ Neighborhood?

So what about you? What are your memories of watching Mister Rogers? Did you know about his Pennsylvania roots, and have you visited any of these sites? Do share!

Click to see more cool, fun museums around the USA… 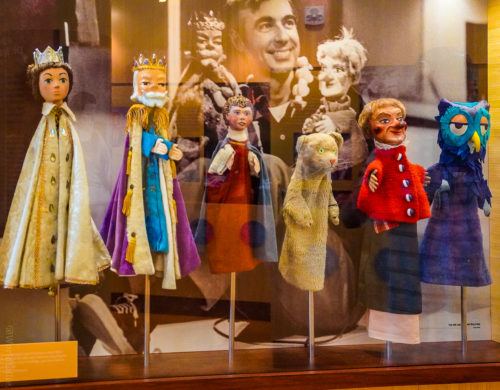 I was born and raised on the North Side of Latrobe, and now at age 82 am living full-time in Thailand! My mother, Helen Rolle at the time and in her early 20's, was Fred Roger's neighbor and babysitter. I know very little more because at the time it was just an interesting fact which I passed over lightly, as was my father's association with Deacon Palmer, Ernie's father. I graduated from Latrobe High School in 1955 and was deeply impressed by the art collection, which was sizable even at that time. As a teenager I studied organ on the Hammond at the high school and became organist at Latrobe United Presbyterian church as well as organist for the centennial celebration of the founding of Latrobe. I will always be grateful for the superb education I received from the excellent teachers in all of the schools I attended - First Ward, Second Ward, Fourth Ward and the High School.

Charles, Thank you so much for taking the time to write this comment and add to the richness of the Latrobe story. Your life sounds amazing! I love that you're living in Thailand now!

I worked for Fred Roger's mother for several years, the nicest lady I have ever met. Fred was very much his mother, just like the person on television. His mother knitted all the time and made the cardigans that he wore on his programs complete with her own sown in tag in the collar. I remember how excited she was when a sweater she knitted was put in the Smithsonian. My father worked for Fred's father at Latrobe Die Casting Co., a hands on owner that you went to directly with concerns, something greatly lacking in today's business world. Latrobe is the City of first, you can find out all about these at the Latrobe Area Historical Society.

Bruce, Thank you so much for taking the time to give us this window into the real Rogers family! What beautiful stories.

Enjoyed reading your article about my hometown and ONE of its many notable people, places and events. As a "Self-appointed, Unofficial and International Ambassador Of Latrobe, PA", I feel it is incumbent upon me to point out a few things that you missed about this small city of less than 8000 residents. The city is named after the son of Benjamin Henry Latrobe. His father designed the US Capital building and is know as the founder of professional architecture in American. Fred Rogers and Arnold Palmer, yes the famous golfer, were classmates at Latrobe High School. Dr. David Strickler was the creator of the first banana split in 1904 at Tassell's Pharmacy. The sixth Annual Great American Banana split Celebration was held August 23-25. Dr. Gregory Forbes, the severe weather expert on the Weather Channel; Captain Chester Lee, NASA missions director of six Apollo moon missions, including Apollo 13; Sue Poland Paterno, wife of Joe Paterno; Sandy Dell, 1978 Miss Pennsylvania USA and actress, model and spokesperson; Ed Abbaticchio, professional football player on first all professional team and first Italian-American professional baseball player; and Jacob Gebhart, killed at the Battle of the Little Bighorn are from Latrobe. It is the home to St. Vincent College, a private Benedictine liberal arts college and the first Benedictine monastery in the US; the Pittsburgh Steelers' summer training camp for over 50 years; and the location of the first scheduled air mail delivery drop. Latrobe Brewing Company, founded in 1939 was one of the largest breweries in the US original, originally made Rolling Rock beer there. The Greater Latrobe Senior High School has the largest collection of student selected and purchased art work open to the public worth over $3 million. In addition, Smithsonian Magazine in 2018 selected Latrobe as one of its Top 20 Small Cities to Visit in the US and the Latrobe Community Revitalization Program has won several awards for its many projects. There are many other notables from this special place that I could mention. If you ever have the chance, please visit the Latrobe Area Historical Society to see their displays.

Dennis, HUGE thanks for taking the time to give this important background!!! I really appreciate it and my eyes are opened!

Ariana - World of Travels with Kids

This sounds like such a fun place to visit!