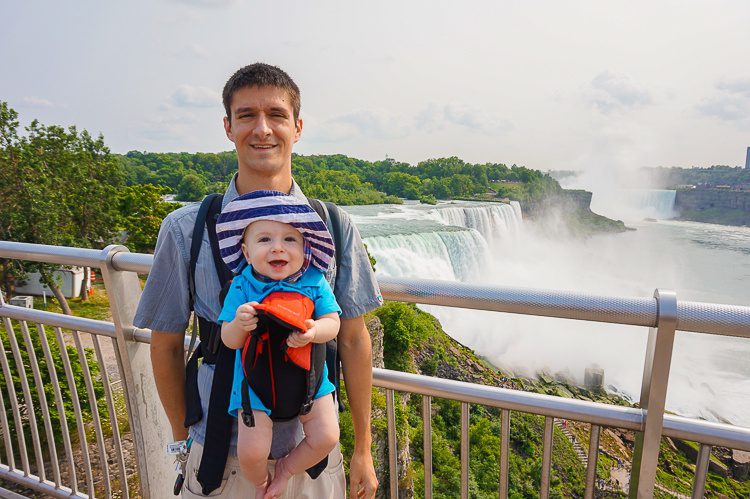 “WHOA!” I yelled to my husband as we zipped down the highway from Boston to Ohio to visit family. “Do you realize that we’re just a few miles away from Niagara Falls?!” 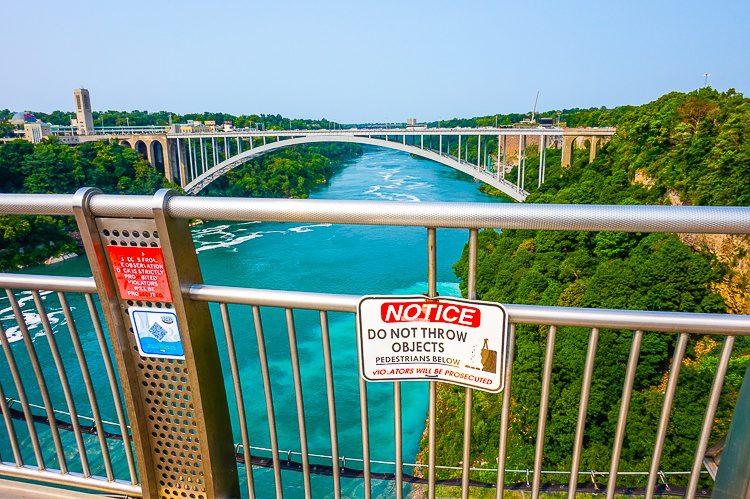 “No, I’ve never seen it!” I replied breathlessly. “We HAVE to go, even if we only have half an hour before we need to get back on the road.”

Colin nodded as he took the exit towards Buffalo, New York. Baby Devi snored in approval from his dreamland in the back seat. 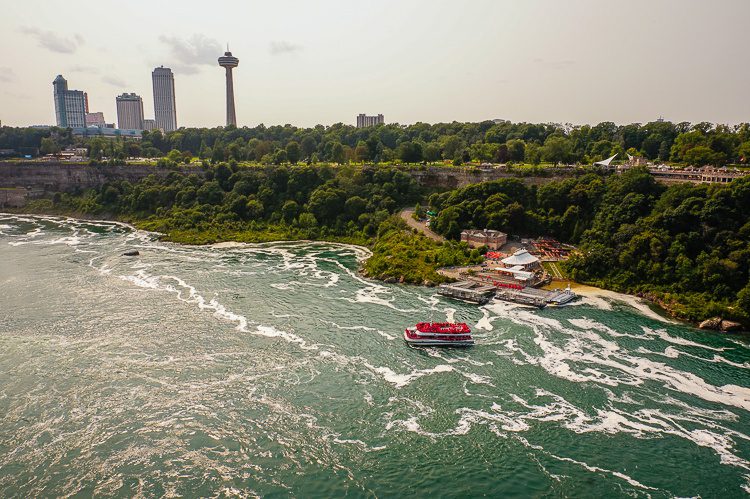 Tour boats chugged from both the American and Canadian sides of the falls.

To our delight, it was remarkably easy and inexpensive to do a rapid Niagara Falls tour from the American side. First, park in one of the many parking lots. We chose the one near the Hard Rock Cafe because it was closest to our target: the Observation Tower. Parking was about $10, which was annoying, but worth it for convenience, and balanced out by the low prices of everything else we did. 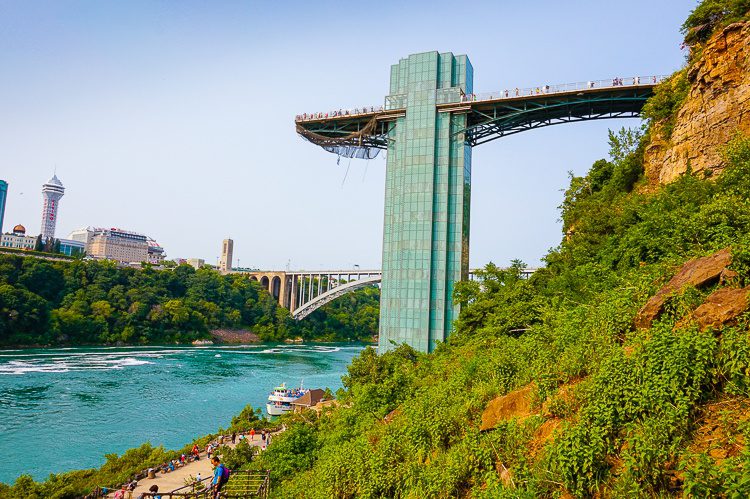 This is the observation tower on the American side.

On the recommendation of Niagara Falls’s friendly Twitter representative, we strode the four minutes from the parking lot to the Observation Tower (dramatically pictured above) and paid the $1 entrance fee. That tower was worth all one hundred cents, and more! 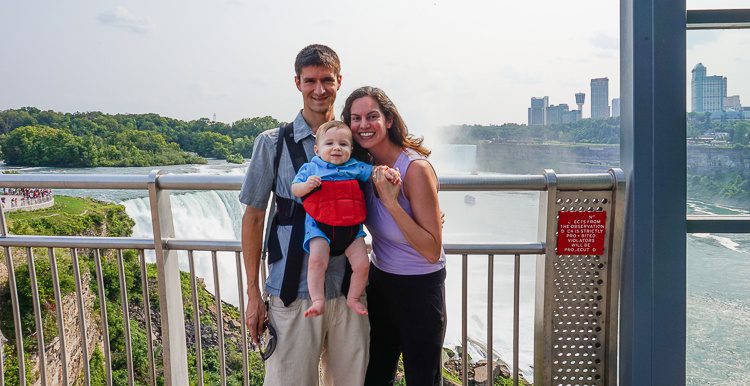 All ages can enjoy Niagara Falls.

After snapping photos our faces in front of the falls alongside tourists from around the world (what an extraordinary diversity of visitors!), we took the tower’s elevator down to the footpath leading to a close-up of the falls, pictured below. It was so misty that all my photos of it came out almost totally white! In person, though, the rushing, gushing water is a thrill. 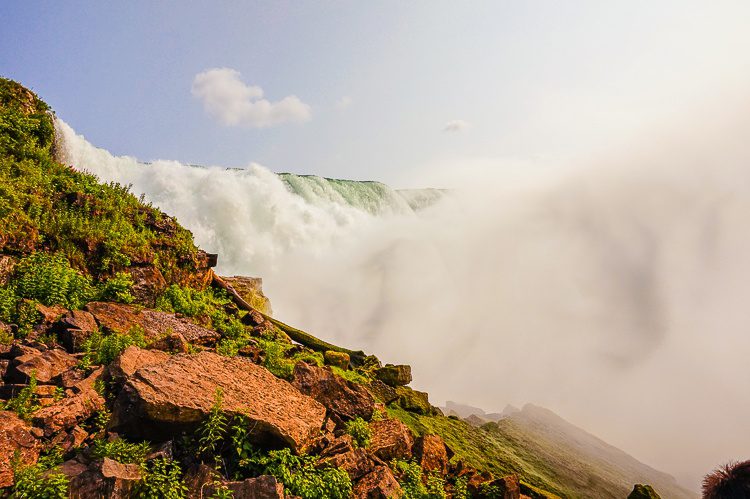 Massive clouds of mist made the view white.

Back up the tower we went, and baby Devi watched the Maid of the Mist tour boats chug by with fascination. We decided not to take the boat ride because Devi is just a wee babe and we didn’t want him getting all misty, nor did we have the time to spare. Someday we’ll go back and get properly soaked on those boats, though, as I’ve heard good reviews. 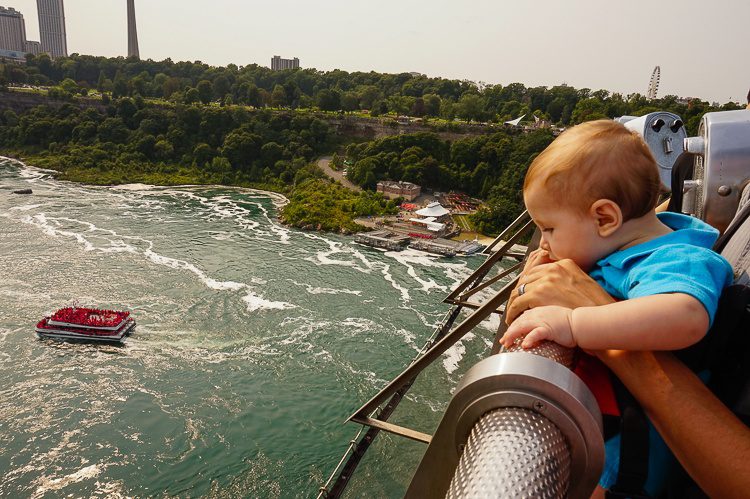 Baby Devi was fascinated by the boats.

So now here’s a word of caution: Though the park surrounding Niagara Falls is beautiful, well-maintained, and free, the town of Niagara Falls itself is rather… non-serene. Since this is the oldest U.S. State Park (established in 1885), it’s had a lot of time to get built up, and garish commercial warrens such as the one pictured below sprawl hither and yon. 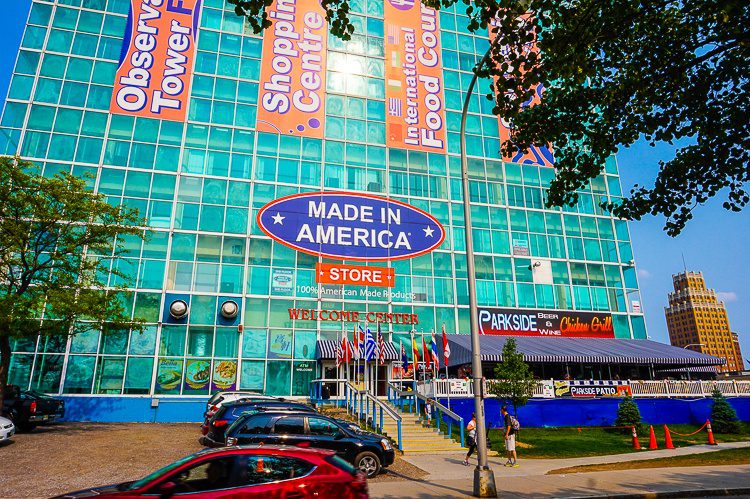 This is NOT actually the “Welcome Center!”

Here’s the tricky part: Dozens of these malls have huge signs saying “Welcome Center” and “Visitors’ Center.” These are NOT actually the real Visitors’ Centers! They are just stores that “welcome” you to spend money in their halls. Unfortunately, we were tricked by the sign above and spent a disturbing fifteen minutes wandering amid neon Niagara Falls sweatsuits until we realized our mistake and backtracked to the actual park entrance. Sheesh! I was reminded of the creepy fake border patrol building between Thailand and Cambodia that almost trapped me. 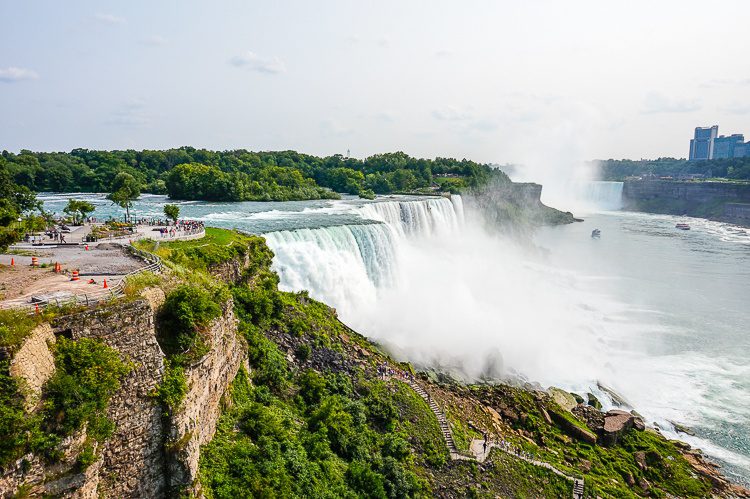 Why would anyone want to go over the falls in a barrel?

Speaking of borders, what about the Canadian side of the falls? In fact, rumor has it that the view from Canada is much better than from New York, but alas, we didn’t have our passports with us so we couldn’t cross the “Rainbow Bridge” (yes, it’s really called that) to switch countries. Next time! 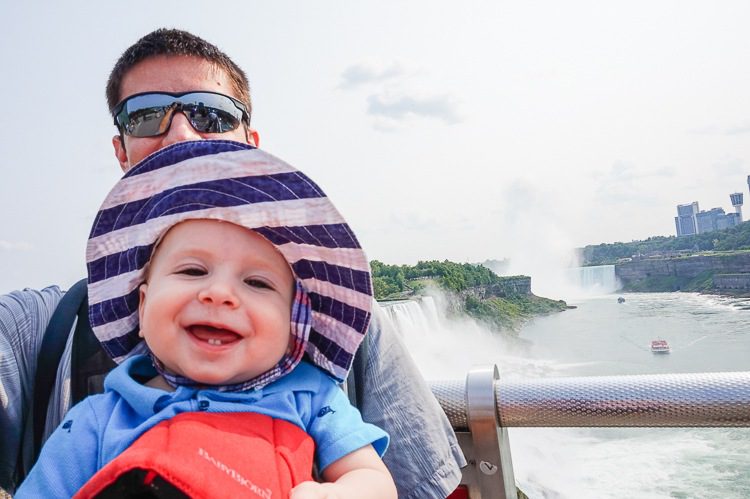 Niagara Falls is a gem.

Thirty minutes after parking at Niagara Falls, we waved the water goodbye and sped back down the road. We had successfully sampled a nice taste of the falls, and vowed to return in the future for more!

Half an hour seems too short to visit one of the most popular tourist destination. Is it because it's people are just exaggerating about it and there's really nothing much to see?

It is most certainly too short a time, but it's all we had, because we had to get back to Boston. My point in this article is that it's possible to get SOMETHING out of the attraction in just thirty minutes, so it's still worth it.

Awesome!! Love the pictures. I've only seen Niagara Falls from the Canadian side...but last year was my first trip there! :)

Great pics. The waterfall and view look beautiful. Baby Devi is so cute.

It looks you guys have enjoyed this fantastic spot and the baby seems to have enjoyed more..ad pictures are really mind blowing..