The Blues Brothers at the Parthenon of Athens, Greece 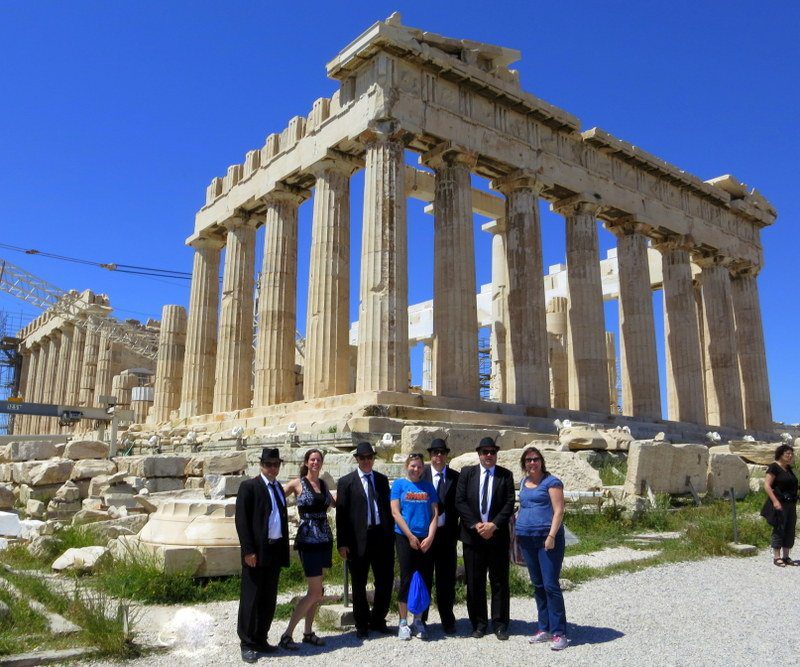 Who were the mysterious Blues Brothers at the Parthenon in Athens, Greece??

“I’m not leaving the Acropolis until we get a photo with those Blues Brothers!” I declared to my companions from our Greece Teacher Tour.

We were standing next to the 2,500-year-old Parthenon (the “Most Perfect Building Ever Created”) under the radiant sun in Athens… but I couldn’t take my eyes off of the five men dressed in spiffy black suits who were milling around like typical tourists.

“Why do you think they’re wearing those costumes?” I asked, aching to know. “Is it something religious? Are they secret service? Are they a Men in Black anti-alien brigade? What are they DOING here?”

“Quit wondering and let’s find out!” my fellow Boston teacher, Jen exclaimed. With that, she strode towards the men. 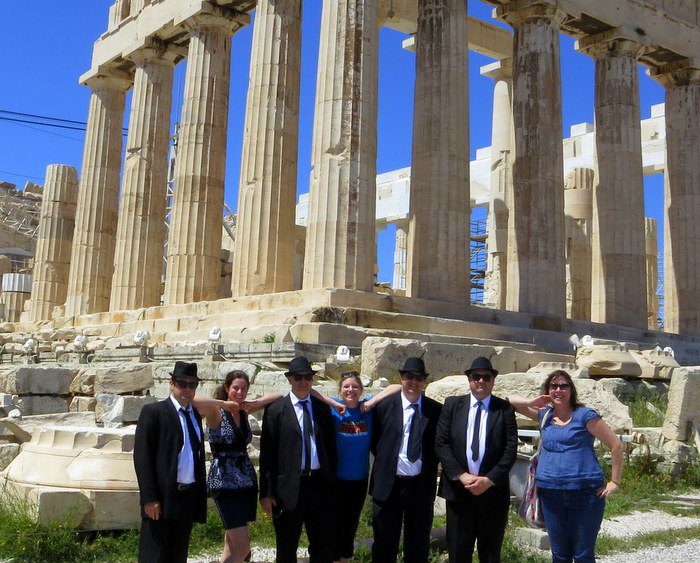 These men in costumes brought us so much random joy.

Jen returned thirty seconds later with the five men trailing obediently behind her.

“They’ve agreed to pose for photographs with us!” she proclaimed.

“Indeed,” said one of the chaps in a refined British accent.

“Oh,” said another gent with a voice like a famous London actor, “we always do this costume thing when we travel. We just fancy touring the world in Blues Brothers costumes. That’s all.”

“That is AWESOME,” I sighed. 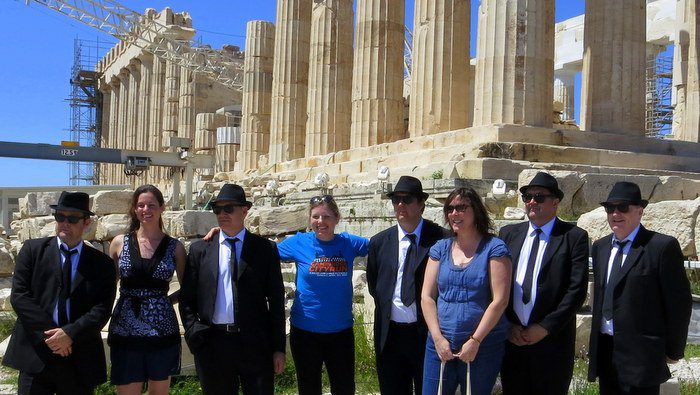 At first we thought there were only four Blues Brothers, but more kept coming.

“Do you perform at weddings?” my coworker, Cathy, asked jokingly.

At that point, I was so overwhelmed with the joy of randomness that I yanked everyone out in front of the Parthenon to start snapping photos. The results adorn this article.

I doubt even the Oracle of Delphi could have predicted that a highlight of our entire Greece tour would be frolicking with five men dressed as the Blues Brothers at the Parthenon. 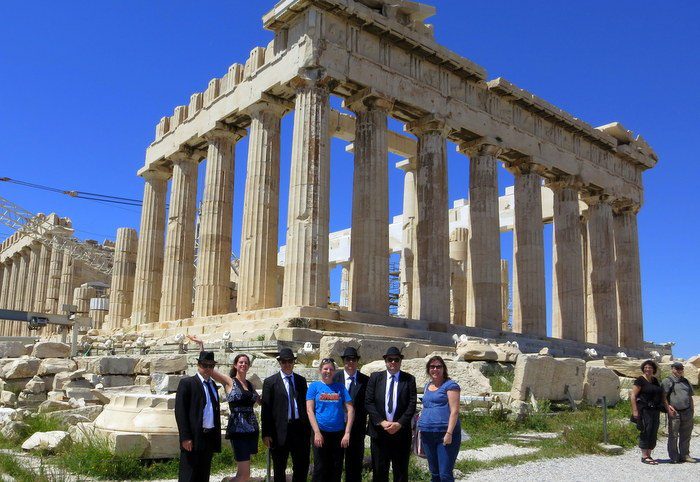 Help us track down these costumed men so we can thank them for being great!

But here is the heartbreak: In the haze of our exultation, I neglected to give my business card to these men before we descended the Acropolis. This means that I now have no way of contacting them to say THANK YOU for making us smile.

So, dear readers, here is your challenge: Help me track down and contact this gaggle of gentlemen who travel the world wearing Blues Brothers costumes. They can’t be that hard to find if they really always tour in those outfits, right? Put out the inquiry through your social networks, and let’s what we find! And to sweeten the deal: a mystery reward shall go to the person who succeeds in finding these fellows! Let the games begin. 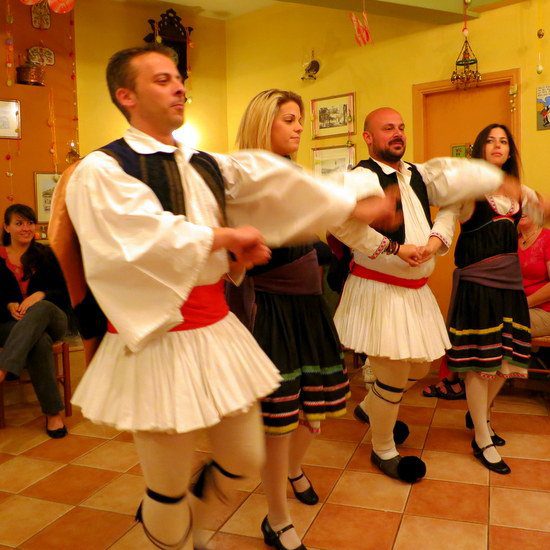 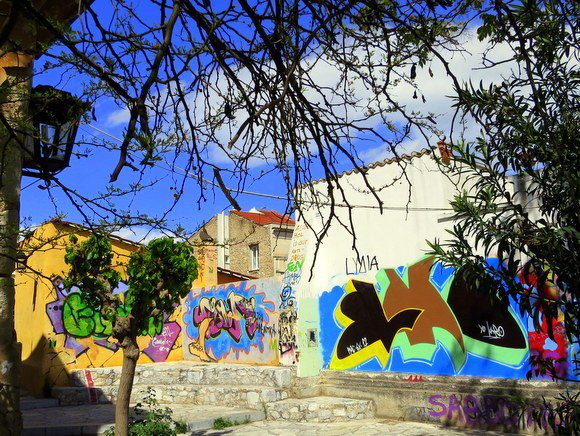 Graffiti is All Over Greece. Is it by Artists or Vandals?
Read Next Post →
Click here to cancel reply.

Oh hi girls!!! Well let me tell you I’m married to one of that Blues Brothers. They have been everywhere and keep doing it!!! So keep you travel eyes open xxxx

WOW! What an amazing connection! Can you tell us more details??? And how did you find this article? Love it!!!

Met these guys in romania and when I mentioned that I like to spend my holidays in greece one remembered their trip to Athens and past on this video https://youtu.be/Mde5zCGdEyg Hope you will enjoy this as much as me.

Oh my god! I think my voice sounds pretty good! It was the inspiration of the Muses!

Ahh!!! What an amazing coincidence!!! Thanks for bringing back memories. :)

OMG Lillie! Just came across this again online! This was one of the most hilarious days of my life. Thank you for capturing this memory so well :)

You're welcome. :) What a CRAZY encounter, eh?

It's great to see pictures of my teachers having fun and travel around the world. :)

Why are they all wearing black and blue?