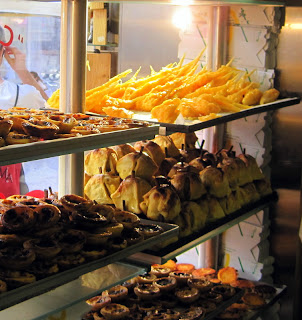 My brother hurled the paper bag to the floor with a thud.

“What the heck is that?” I asked, fearful.

My brother put his head in his hands and wailed: “I had such high hopes!”

I reached into the bag and pulled out: a bright orange, seven-inch long stalagmite of sugar, egg… and what felt a lot like lead. (Visual representation to the upper right of the lead photo.)

At the entity’s head, there were the clear bite marks of an admirable eating effort. Gazing at my sibling, however, one thing was clear: pastry had defeated man.

“I thought it would be all light and fluffy…” my brother moaned, rubbing his tummy.

A woman passing through the hostel dorm laughed. “Most of Portuguese pastry is egg plus sugar,” she said. “It ain’t light!” 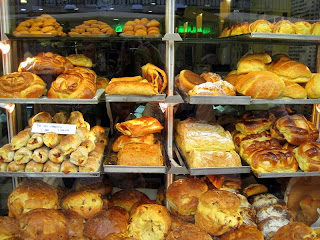 It is worthwhile to note at this point that my brother and I are giants (six feet and six foot six), partially due to an unadulterated adoration of food of all sorts. And indeed, we have LOVED Portuguese food! But it is also important to note that cuisine here in Portugal seems to be meat and potato-obsessed… which is then rounded off with pastries, pastries, and more pastries. Abundant green veggies? We had to buy and cook them ourselves.

Now back to the stalagmite pastry drama.

“Try some,” said my brother, a somewhat evil smile playing on his lips.

Being hardcore, I took a test nibble. “SUGAR! SUGAR SUGAR SUUU-GAAAR!!!” the confection screamed into my veins. I tried a few more munches before tumbling into a faint on the floor.

“See what I mean?” panted my brother. The pastry cackled in victory as I nodded. 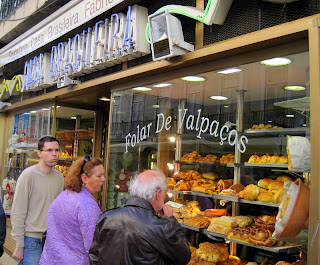 But be happy, dear readers. We are Olympic-level eaters, and we fought back! The next day, we went for a five-hour walk in the Alfama district of lovely Lisbon (highly recommended!), and took a calculated pastry break. At last, we figured out which treats are the most delicious to us amid the golden mounds gracing the windows and cases… and we ate them all, blissfully happy.

Previous Post: « Really, What ARE The Best Hostels in the World?
Next Post: Thanks, Portugal! Europe is Cheaper Than We Feared! »