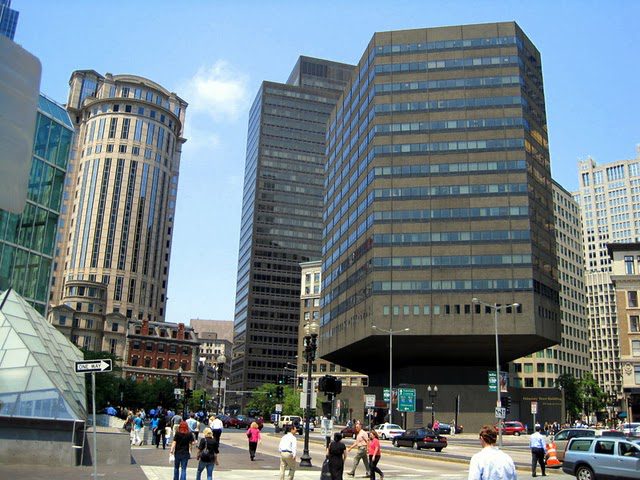 We’re deep into our discussion of “sexy” architecture of Boston, but what about those buildings that are sexy because they are so… how shall we put this… freakishly strange?

To explain where the term “Sexy-Ugly” is from, let’s flash back to the 2001 flick, Kissing Jessica Stein.

Specifically, let’s recall the following chat between the two leads, as they discuss Jessica’s inability to find a man who matches her dream: 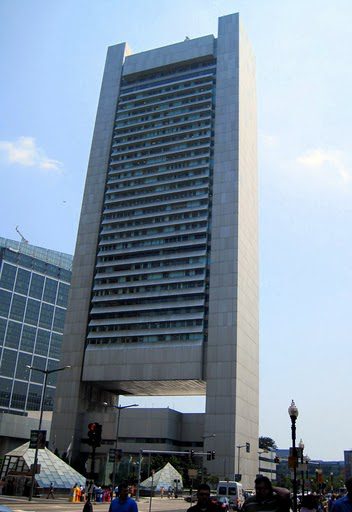 Boston’s “Building with a Hole in it.” Sexy-ugly!

Jessica: Ugly, exactly. Oh my God, is that awful?

Helen: No, not at all. Ugly doesn’t do it for you. That’s okay. See me, I’m kinda into ugly… But only if it’s Sexy-ugly.

Fabulous. You get it, right? “Sexy-ugly” is someone who is not conventionally beautiful in a Brad Pitt or Giselle kind of way, but there is something so striking about them that they are really hot anyway. There are googobs of Internet lists of which celebrities could be categorized as Sexy-ugly, but a few might include: Lyle Lovett, Lil Wayne, Jack Black, Steve Buscemi, and many more.

Understood? Great. Now let’s apply it to two buildings in Boston, both located right by South Station in the Financial District.

1. The Fiduciary Trust Building, also known (by me) as the “Fatty-bo-batty Building.”

The Fiduciary Trust Building by South Station has a giant hanging potbelly. The ponderous weight of its torso balances upon a tiny stick of a trunk, like a man who has chugged far too much beer in his life and never once exercised his little legs.

2. The “Building with the hole in it,” also known as the Federal Reserve Bank Building. 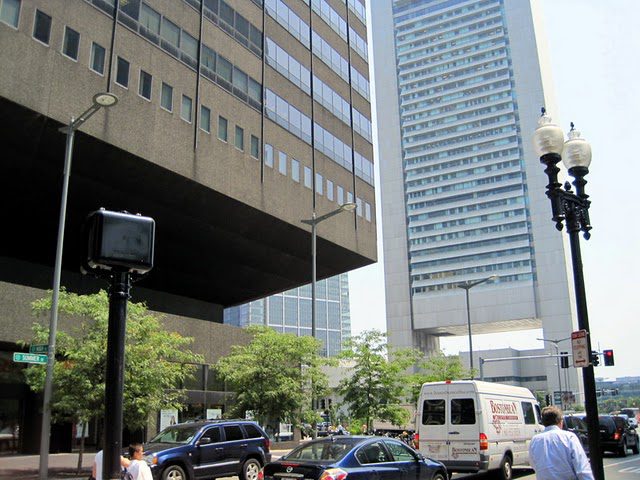 The hole building viewed from under the potbelly of the fat building!

This tall, sleek sweetie is Boston’s third tallest building, was completed in 1977… and features “a distinctive opening near ground level which allows sea breezes to pass through.” Um, thanks, Wikipedia, but you can just say, “Whoa: that building’s got a massive, freakish hole in it!” Sexy-ugly for sure.

Incidentally for any of you Providence, Rhode Island fans, the Federal Reserve Building looks eerily like Brown University’s Science Library (or, affectionately, “SciLi”) in which I frequently fell asleep on rough bright orange couches while “studying” during my undergraduate days.

And further completing the coincidence, the character Jessica Stein in the movie quoted above attended no other but Brown University! And that’s the kind of stretch text-to-world connection that only an English teacher can make.

So what’s YOUR take on the concept of Sexy-ugly? On these Sexy-ugly buildings of Boston? Comment away.

I actually find these buildings very cool. I never really noticed them until know, even though I lived in Boston all my life and pasted there millions of times. I think that it's hard to design a building like that.

These buildings don't seem ugly to me at all! They actually seem really nice. But they're unique too. Haha, I think Lil Wayne can be categorized as sexy-ugly too. There are a lot of people who are sexy-ugly. I love them =]

It's still a little weird seeing some of these buildings because I can't recognize them all. I've lived in boston for 16 years and I still have so much to explore

The term "sexy-ugly" to me means that it's so ugly that it's sexy. I've used that term before to describe animals. I think that elephants are sexy-ugly creatures. (: