How Did My Picture End Up On Huge Wall?

You truly never know where your digitally published photos may wind up. You also never know what fruits your art may reap, even years down the line, when it seems everyone has forgotten about it all.

To illustrate this, allow me to share the strange and glorious story of how a photo I took in 2016 in a small New England town ended up on a massive mural inside the Natick, MA branch of the Wegmans grocery store chain!

The Origin of My Rockport Photo in the Mural:

This tale begins in 2016 when I spent an afternoon in the seaside town of Rockport, MA, just an hour north of Boston. I snapped photos of gulls, buoys, boats, lobster rolls, and of course, the famed red building, Motif #1, which was artfully juxtaposed that day with an equally scarlet hued boat.

As I tend to do, I wove those photos into an article — this piece on Rockport — and went on my merry way… never guessing that YEARS down the line, I would get a shocking email.

The Email: “Can We Use Your Photo?”

In March of 2018 — a full two years after publishing the picture on this blog — I received a message in my inbox from a photographer in Rochester, NY saying that he had been hired by Wegmans to help decorate their imminently-opening Natick megastore… and he thought my 2016 Rockport photo would be perfect for one wide wall!

Stunned, I emailed back that, while I had once found my face on a billboard towering above a highway in West Africa without my permission, I had never before consensually decorated a huge wall. Might he help walk me through the process of contracts, compensation, and correctly sized files?

Now, at this point in the story, things might have gone sour fast if the photography liaison had taken advantage of my green-ness. Luckily, this man proved kind and helpful — in particular with contract creation and compensation negotiation. While I can’t reveal the specific terms, be assured that I did not give away my photo for free!

Now for another stroke of luck: What made this mural possible was that I had successfully saved all of my photos from forever (in three different places, in fact: External hard drive, Google Drive, AND Amazon Drive) in a safe and organized fashion.

This meant I was actually able to dig up the high resolution version of the requested picture, despite it being years old. (My photo editing skills improved since 2016, so I did a bit more color boost and correction from the 2016 version before sending.)

Even luckier, it turned out that I had shot the photo as a RAW file (the highest quality format) instead of JPG, meaning that — as you can see — no details were lost in blowing the picture up so freaking wide. Those camera people aren’t kidding that RAW files are big!

From the Boston Globe to Seeing The Mural In Person

Things moved quickly. Contracts were signed, I sent the high resolution version of my pic, and in April of 2018, the Natick Wegmans superstore opened — celebrated in a front-page splash in the April 29 Boston Globe Business Section… which showed the entire world (er, at least the world that reads the Globe) how my photo had become a massive mural!

Now, you might guess that I would have immediately hopped in the car to see my mural in person, but that neglects one teeeensy detail from 2018: I was trying to parent two wild kids under five, while keeping my head above water in a career concoction of full-time teaching plus blogging. Needless to say… it was a year and a half (aka, today) before I got my actual self to Natick to see the store.

Full disclosure: I would not recommend bringing two rambunctious young kids to a blogging photoshoot which involves two towering escalators. My son may or may not have sprinted away and led us on a farcical yet dangerous game of cat and mouse involving both the up AND down escalator.

“GET BACK HERE!” we screamed, running after the little scamp whilst he — cackling — escalated away from us. There’s nothing quite so humbling to an artist as seeing one’s offspring being completely out of control in front of one’s dignified artwork. Two pieces of creation: and only one stays where it’s supposed to!

Anyhoo, I am happy to report that we all survived this afternoon, and I more or less got the photos I needed for this article (a photo of a mural of a photo — so meta!)… but there were some doubts in the moment.

Decoration matters! From the colorful streets of Old San Juan, Puerto Rico, to the fish-shaped trash cans of Fishtown, Philadelphia, art and color make a huge difference in the mood and actions of people walking through a space. How would that Wegmans wall be different if it were just solid yellow? Less jolly — that’s how!

We had a lovely chat with a woman named Patti who works in the flower section of the Natick Wegmans, overlooking the mural. She told us that she’d watched the mural going up via gargantuan strips — strip by strip. (Isn’t it amazing how many people go into every space’s creation, behind the scenes?) Patti made me grin upon revealing that she frequently hears people compliment the Rockport scene as they walk by!

I am honored to have been part of the artistic elevation of this increasingly popular Natick megastore, and I’m tickled by the twists of fate that brought my boat snap to the “big screen” of a massive mural wall. I thank the designer who reached out to me, and am inspired by him to help others make their debut to a bigger stage, in turn.

So what about YOU? Have you been to the Wegmans in Natick and seen the Rockport mural? Have you ever had a photo put into a larger canvas? Do share!

2022 update: A different one of my photos was also recently turned into a huge Massachusetts tourism billboard! 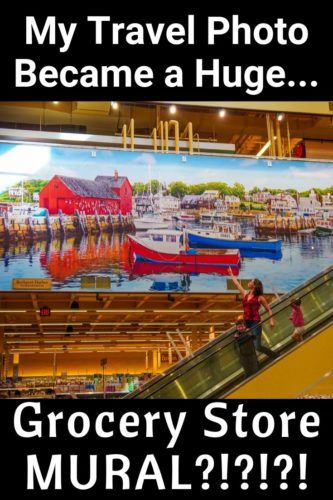 What an exciting story! Congrats!

As an amateur photographer, this story made me really happy for you. Well done!! I actually live nearby that store so am planning on checking out your work soon :)

Aww, thank you! Curious your reaction when you see it in person!

This is awesome! Glad they fairly compensated you, and I love the final result.

This is so cool, congratulations!

That's amazing!!! Congratulations on this, that's really cool to be randomly found like that!