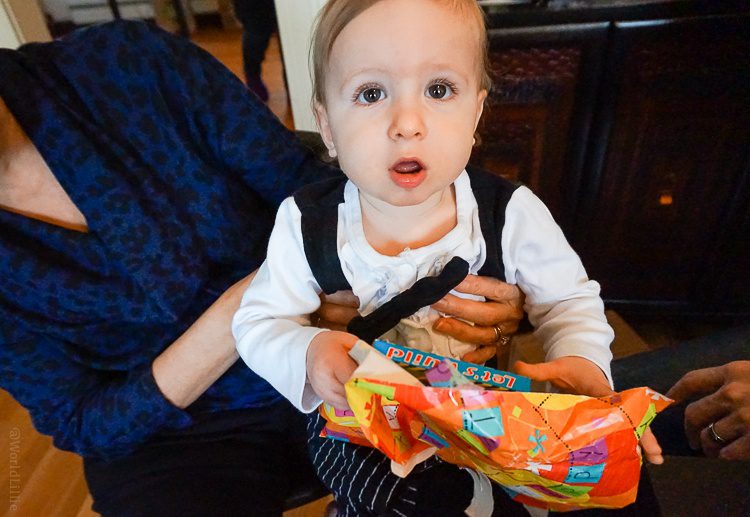 The wrapping paper is a toy in itself!

Want to win at throwing a 1-year-old’s birthday party? Stink at entertaining, like me? Follow these easy steps, laughing all the way.

Step 1: Force baby into overwrought formalwear. Purchase discount baby tuxedo (replete with frilly blouse), and slip it onto squirming baby. This is worth it, despite the fact that the following will happen to this tux: bow tie crumpling, crotch ripping open to permanently expose diaper, and baby soiling tux via an impressive variety of methods. 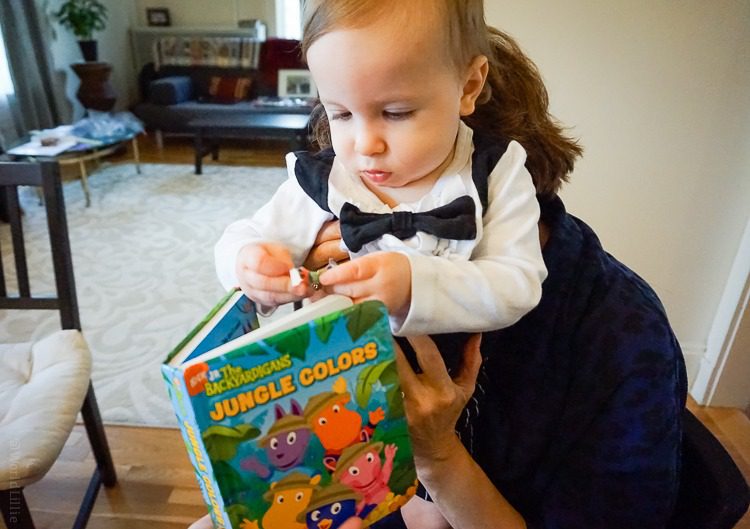 The baby formalwear is a must. (Pictured before it was utterly soiled.)

Step 2: Cake Smash… Sort of. Have all sorts of grand plans to bake a healthy yet gorgeous cake for baby to use in the classic “One Year Cake Smash” moment, which you intend to catch on camera and laugh about for years to come. Instead, five minutes before the party, pick up a cupcake from the store across the street and hastily jab a candle into it. Baby will stare at this flaming brown mound in confusion, halfheartedly making the “More” sign language sign. More what, little guy? More fire? Yipes! 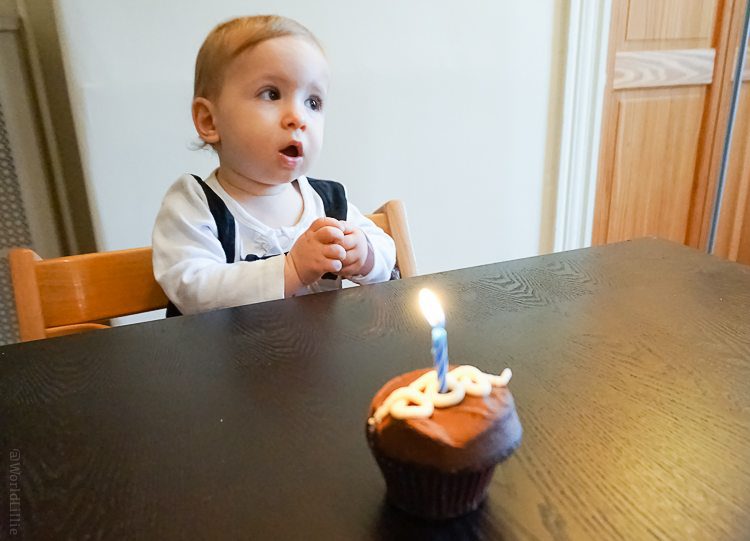 Step 3: Confuse baby. As everyone is singing to your little one, he will exhibit the funniest expression: a mixture of complete confusion and awe. It’s not often a person has six folks he loves singing very intently into his face! (Yes, we only invited four people to the party — the four esteemed grandparents — because entertaining is not our strength.) Next, blow out the open flame in front of baby (you know, the jiggling candle you’ve been trying to keep your wee one from grabbing), cut open the hard cupcake, and bellow encouragingly at baby: “Smash it! Smash it!” while snapping photos. Baby daintily pokes at cupcake, derailing dreams of “The Classic Cake Smash.” Sigh. 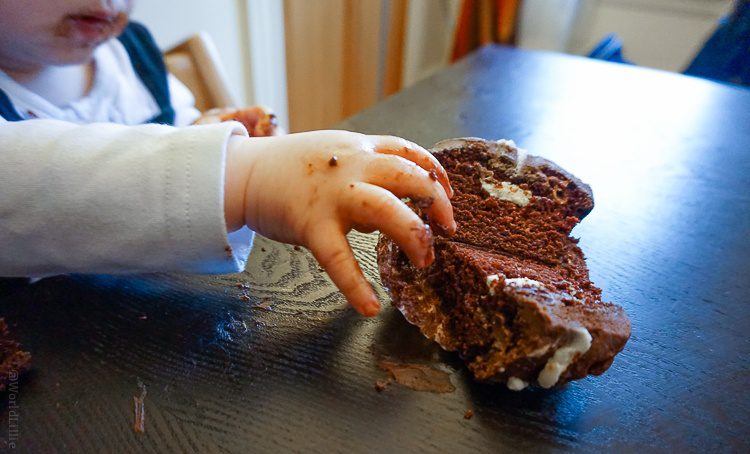 Not exactly a Cake Smash, but cute nonetheless.

Step 4: Attempt to fix things. Realize you forgot to take out and use the festive birthday plates and napkins, which really would have improved these photos. Realize your camera was on the wrong setting the whole time. Encourage baby to smear more frosting on his face, then notice this frosting is kind of hard and doesn’t smear much. Oy vey. Make do with photos of the cuteness that still resulted, despite the non-smashed non-cake. 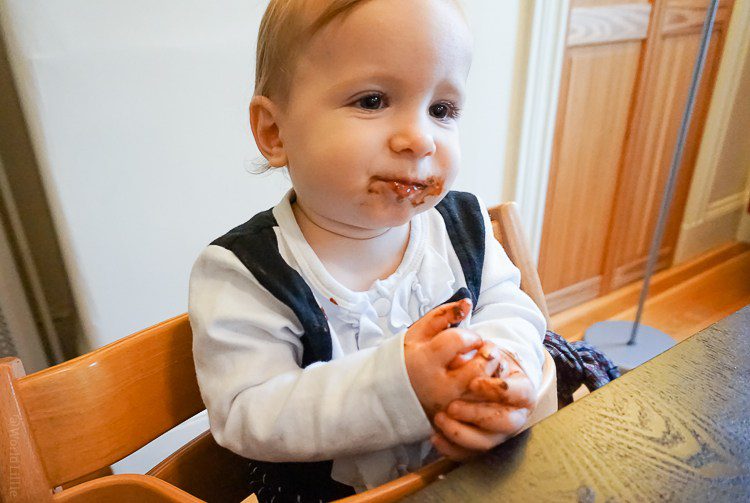 Step 5: Present presents, or should we say, wrapping paper. Clean up baby while he howls with indignation. Privately confess that you won’t even try to get the frosting out of the tuxedo frills. Then begin unwrapping presents! Realize baby is far more into the wrapping paper than the gifts. Foil baby’s repeated attempts to eat the paper. Pick up paper seventeen times as baby gleefully hurls it to the ground and reaches for it again. 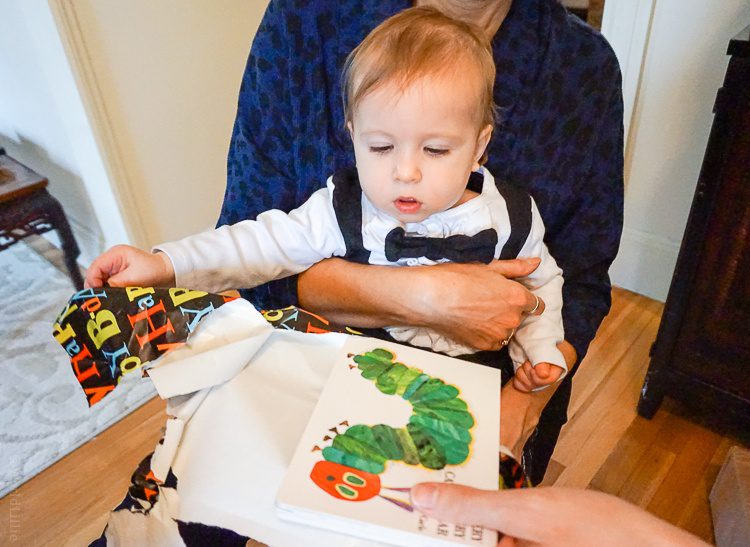 Step 6: Be moved. Despite all this mayhem, a baby’s first birthday is a major event. For parents, it’s the exuberance of realizing, “We did it! We parented successfully for a full year, and we are getting the hang of it!” It’s the shock of realizing your baby is one year old — a whole year! — and that time is neither moving too fast nor too slowly, but that a year has occurred nonetheless. It is the beauty of seeing your little guy open a gift (in our case, the Raggedy Andy doll pictured below) that mirrors precious childhood memories from earlier generations of family, and feeling the circle of family embracing across time. We may have failed at Cake Smash, but in the end, our party and the year it celebrated were a success! 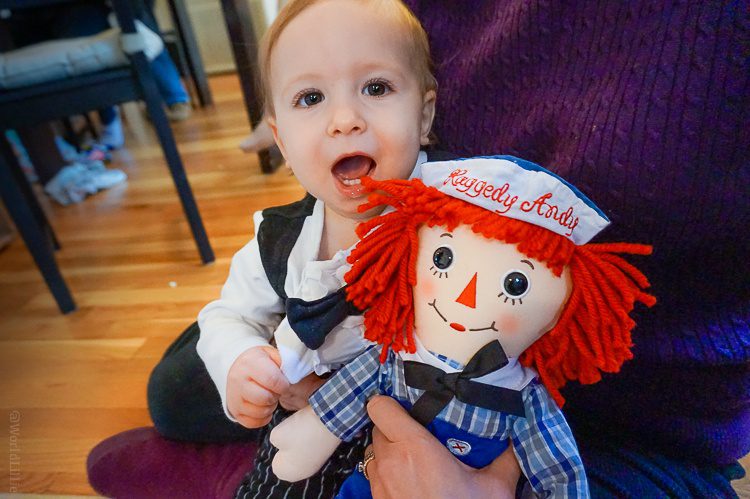 Step 7: See what’s next! Wonder: Which celebration shall we rock out now? Ah, right — Thanksgiving! Let’s do it. The audio that goes with the photo below is, “YAAAYYY THANKSGIVING!” 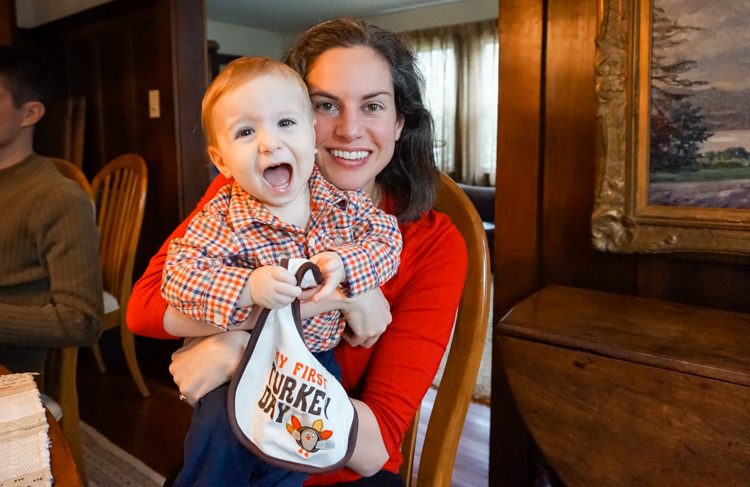 We mastered the birthday thing, so now on to Thanksgiving!

So what about you? What experiences have you had with first birthday parties? Got any advice or anecdotes for us? Did YOU succeed a Cake Smash? Can anyone, really?? Do share.

Want a neat contrast from a year ago? See photos of our baby from the week he was born, here, and pictures of his first Thanksgiving (less than a month old!) here.

My Daughter is turning 1 on dec 19. and we are taking her to Bangkok together with my parents. im planning to take her somewhere new every year on her birthday. :) its our first time in Thailand. the day plan is Ayutthaya by day and dinner cruise at chaofraya river. lets hope they allow cake smash on their cruise! hehe thanks for tips! im so excited!

That is so neat! I bet they will allow it. :) Happy birthday to your daughter! What an exciting thing to travel to a new place each birthday.

This bears a disturbing resemblance to my 40th birthday party! ;)

Hahaha! Proper cake smash technique may be impossible without half a century of practice. Aim for the 50th!

Enjoy him while he is little. They grow up very fast.

Thanks! I'm really determined to live in the moment and not fall into the "it happened too fast" mantra. My mantra instead is that it's all the perfect pace!