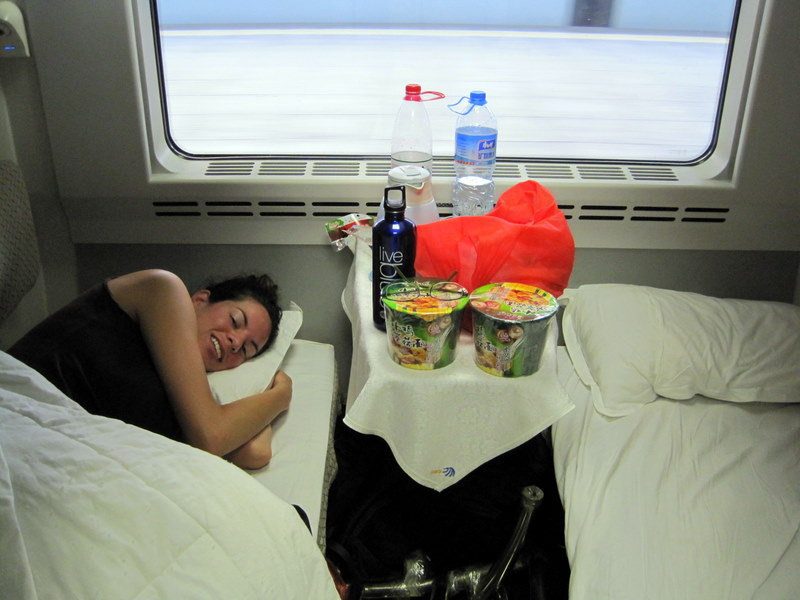 My best sleep during China travel: on a 16-hour train!

One of the best nights of sleep I’ve had in my entire time in China has been… on a 16-hour fast train from Beijing to Chongqing!

Who knew that the key to a restful slumber was sticking yourself in a metal box hurtling hundreds of miles per hour through the most populous country on Earth?

For those of you who sometimes forget this, China is larger in area than the United States, so traveling from one corner (Beijing) to the center of the country (Chongqing) is like traveling from Boston to Kansas: roughly 1,200 miles, which would take about 30 hours by car or normal-speed train. Whoa! 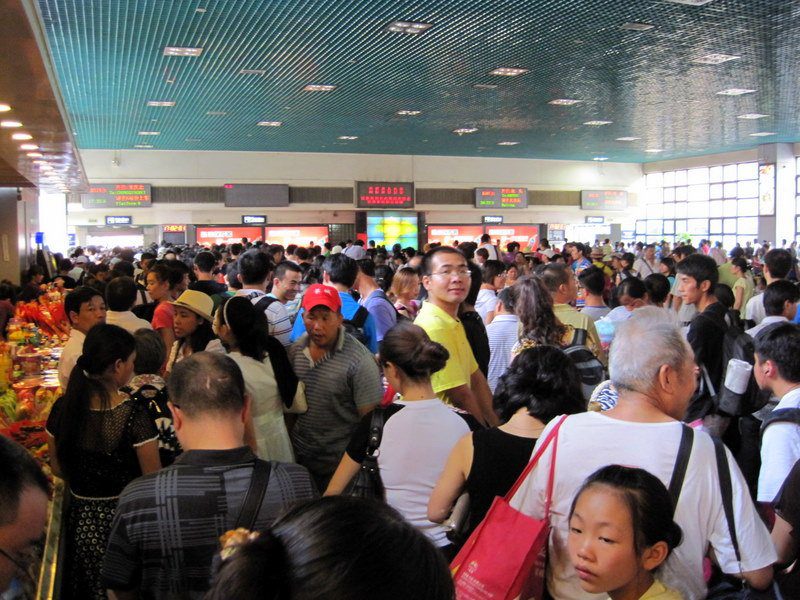 What a crowded train station in Beijing, no?

Despite the distance, I forced the train option on my friends because I was nervous to fly, as I’d heard mixed things about in-country China air travel quality.

Soon, however, it became clear that a long-distance train in China was a cultural experience not to be missed. As you may know, China has invested fantastic sums into creating state-of-the-art transportation infrastructure (including a train that goes as fast as a plane between Beijing and Shanghai?!) and so we really could not be in this country without sampling its latest innovations.

Now, purchasing train tickets in China is highly confusing, not only because you can’t buy tickets until 10 days before departure, and not only because there are limited English explanations, but also because there are dozens of different types of trains (distinguished by letters such as “D” and “Z”) which vary WIDELY in quality, speed, and price. Thank heaven we had the help of someone already in China to buy our tickets, otherwise it would have been tough to identify and book our fabulous, speedy night train. 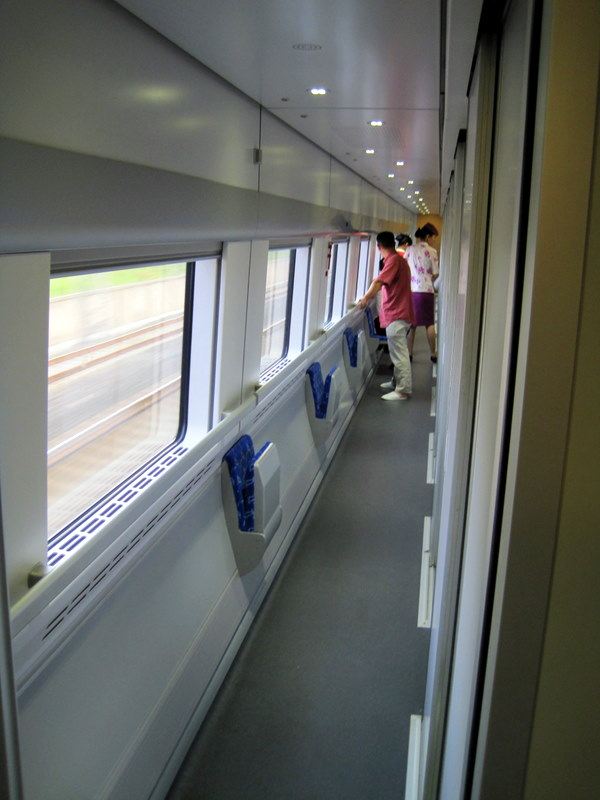 With our friend’s help, we chose the D319 train: a high-quality fast train that offers both “soft sleeper” cars (4 bunk beds), and “luxury soft sleeper cars” (2 beds). We selected the “soft sleeper” non-luxury option, meaning the three of us Americans shared a train dorm with a very kind Chinese man. The cost was cheaper than a plane ticket, though not much, but it was worth it as we saved a night of paying for a hotel… and it was highly enjoyable.

The train was lovely: sleek, clean (far cleaner and more modern than the lower budget trains we later saw in China, and in fact, more modern-looking than Amtrak trains I’ve been on in the U.S.), and bustling with uniformed attendants. Our little cabin had four TV screens (one for each bunk bed), free little white slippers for each of us, unlimited free hot water in a pot on our table (for noodle snacks and tea), and a bathroom and sinks down the hall.

A quick note about the bathrooms on our train in China. You may recall that I hate squat toilets with a passion, and that I made the stupid mistake on my 15 hour train ride through Thailand in 2009 of not realizing there was a non-squat toilet hidden on the far end of the train. Well, I made that stupid mistake again! Argh! Note to fellow squat toilet-haters: take a look around a train in Asia before resigning yourself to the first “squatty potty” you find. 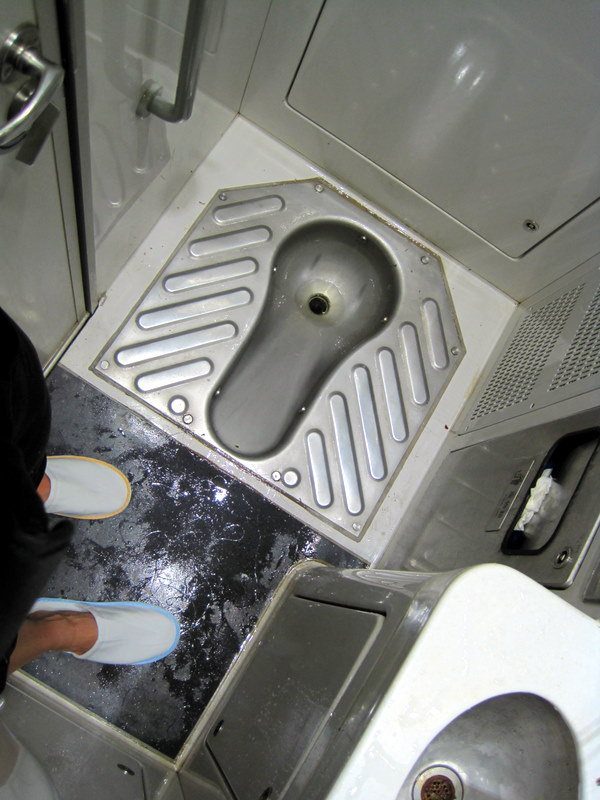 A squat toilet, and train slippers.

Back to less smelly matters. The train pulled out of the station right at 5:35pm, smooth as Brian Boitano on ice skates, and off we went! The tall buildings of Beijing began to thin, and green, hilled countryside alternated in flashes between emerging towns and construction cranes.

A cheerful attendant with a jaunty hat appeared at our door, asking if we wanted a hot dinner from her cart. Why, yes, we did!

“What is the word for “Delicious?” we asked our Chinese dorm-mate.”

“Henhao chi,” he responded, then quickly added: “But train food… NOT delicious.”

Our roommate had a point, but the dinner wasn’t terrible (despite extreme spiciness and the shrimp gazing back at us with its beady black eyes intact), and we ate it down.

To be honest, there’s not much more I can say about that night because (at the elderly hour of 6pm, I promptly drooped onto the clean white sheets of my train bunk bed and… fell fast asleep until morning. 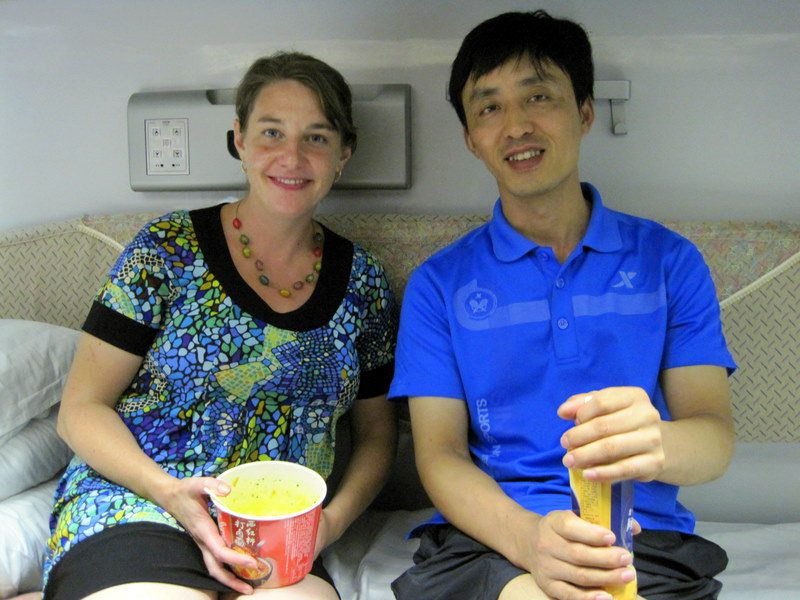 I have vague memories of Colin, Gareth, and our roommate giving each other language lessons (English-Mandarin and Mandarin-English), and I remember feeling very cozy, happy, and intercultural.

I remember brushing my teeth at the sink in the hall with my water bottle for rinsing, as you’re not supposed to drink the tap water in China, and much less so the tap water on trains in China.

I remember that when I dumped the dregs of my instant noodle cup into the sink and was mortified that the noodle and scallion bits didn’t go down the drain, a uniformed train attendant materialized and scooped out the detritus for me. So kind! 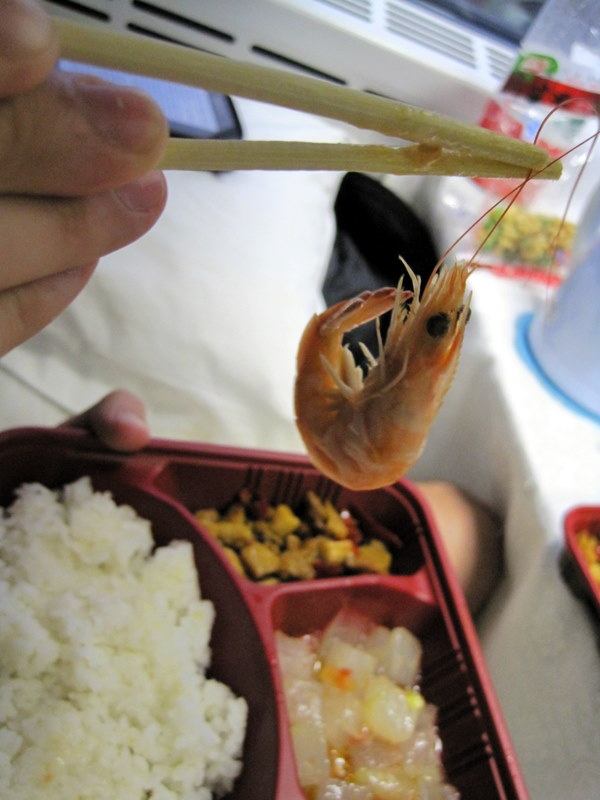 And finally, I remember waking up, fully rested and totally cheerful, with just an hour left in our sixteen-hour journey, picturesque green rice fields speeding past our window.

As we climbed off the train and waved goodbye to our new friend, we remarked: “That was awesome! Can we do that again?”

Thank you, D319 Train of China, for treating us so well.

We would need all the strength we could get for what was next: navigating the boiling hot, polluted, 32-million-person-populated megacity of Chongqing to get to a 5-hour bus to our friend’s apartment in Yunyang!

I am train junkie.. lol (enthusiast) .. and I have loved always train travels.

I would love to take this train journey.. thanks for the insights..

Have you ever taken the Trans-Siberian?

I've never taken the Trans-Siberian but am very intrigued!

Sounds fantastic. We want to do a train ride from Guangzhou to Guilin in January but haven't figured out how to get the tickets (we want to travel the day after we fly in). Thinking of approaching the hotel to do it for us?

Oh, exciting! Since China is such a confusing country to travel in, do ask for help from locals as much as possible. If I were you I might even contact the hotel and/or a tour agent in China now, as I seem to remember sometimes it's hard to get train tickets last minute. Good luck and enjoy!

Well, you are lucky that you get a bedroom to sleep in the train because I went to California last year and it was awful. We sat in the airplane for about 6 hours and my ears start to hurt. We sat in the seats for 6 hours with no bed to lie down on. When we get off, my bottom hurts really bad that I can't move no more. It looks like you are sleeping well in the train the whole time but to me I can't sleep. The train makes too much noise.

I myself also hate squat toilets because they are so uncomfortable. I also remember from one of our class desscusions in class that China does have a bigger area then the United States of America.