You’ve read my account of the Great Wall of China, the Forbidden City, and other China tourist attractions, but now let’s get into the darker side of my 17 days in the most populous country on Earth.

The reality is that China is the most intense country that I have ever traveled to, and I have traveled to over 30 countries across the globe!

Now, the intensity of China travel is actually good news, because it means that the Boston students I am taking there in February will truly get the experience of seeing another world. That said, it is worth knowing up-front what some of the challenges of China travel are.

1. Censorship. Here is a partial list of websites that are blocked in China: Facebook, Twitter, YouTube, The New York Times, Blogger, most U.S. bank websites, Google Documents, Picassa Photo Sharing, and web searches for phrases like: “Democracy,” “Martin Luther King,” “Human Rights,” and “Dictatorship.” The level of censorship varies depending on your particular location in China and current events, but for the most part, you will encounter a lot of mysterious “This Website Could Not Be Loaded” error screens while traveling in China. 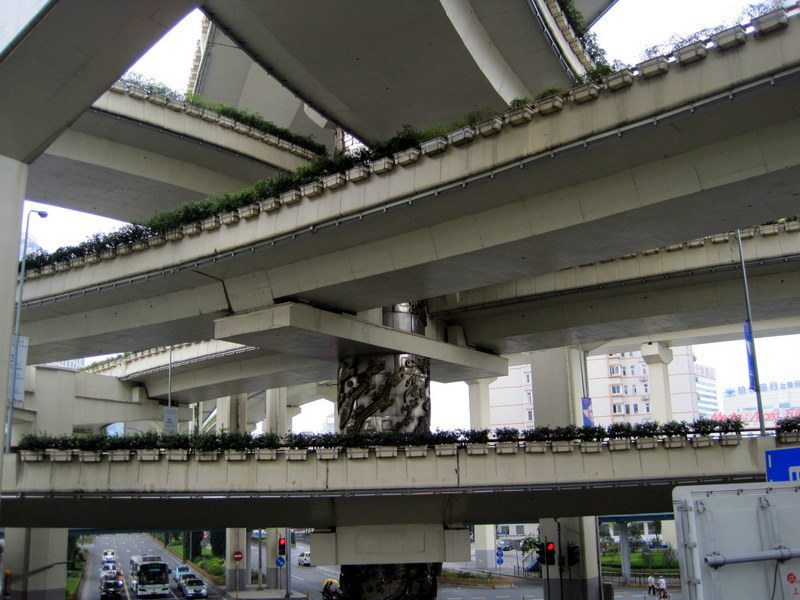 Interlocking highways in Shanghai. What a construction pace!

Further, though G-mail will usually work, it is documented that the Chinese government frequently tampers with it, making it crash or not work. For this reason, I was very careful while traveling to not email or G-chat particularly inflammatory words, fearing that my account would be blocked.

As you can imagine, for a woman who runs two websites, this “Great Firewall of China” was infuriating. Yes, you can use a VPN to log in to blocked sites remotely via non-censored countries, but this can cause problems with your email, Facebook, and bank accounts, because you will be flagged as a hacker since it looks to these sites like you started browsing the web in China, and then teleported thousands of miles away. Believe it or not, I went all 17 days without using Facebook or Twitter, because I didn’t want to deal with that hassle. What an intense adjustment for this freedom-accustomed American to experience a taste of censorship! 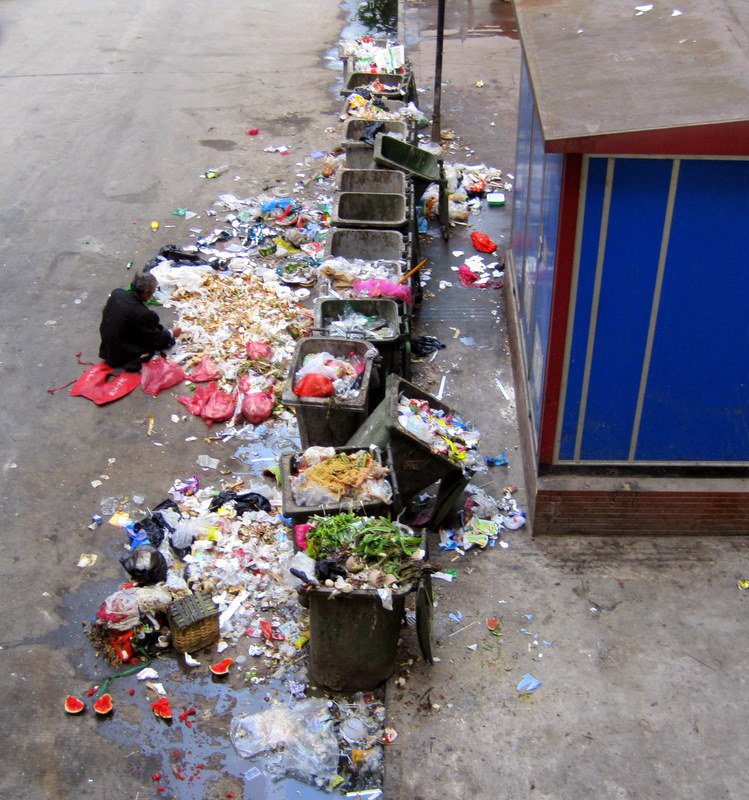 Trash bins below a fancy restaurant in Chongqing.

2. Pollution. You don’t know how much you love and crave blue sky until it’s gone for days on end! Because of a combination of pollution plus the general geographical mist and fog that’s been around for centuries, China’s sky is almost always a thick, gray porridge color.

Moreover, turning your eyes downward, bodily fluids are more common in public in China than in other regions. People spit (loudly), babies publicly urinate and defecate, there are intermittent pools of foul-smelling mystery liquids on the ground, and soap is startlingly absent. All this takes some serious adjustment.

3. The Language barrier. What a strange feeling to be unable to read again! We encountered some English translations, but many, many times, all there was to order by in a restaurant, or to communicate to a taxi driver with was… those beautiful Chinese characters that I can’t pronounce! It is highly recommended to plan ahead with a bilingual friend or guide, and/or always have a copy of the Chinese character for your destination or hotel. Even with our dear local friend, however, every endeavor took us ten times longer than we thought it would, due to miscommunications and confusions. 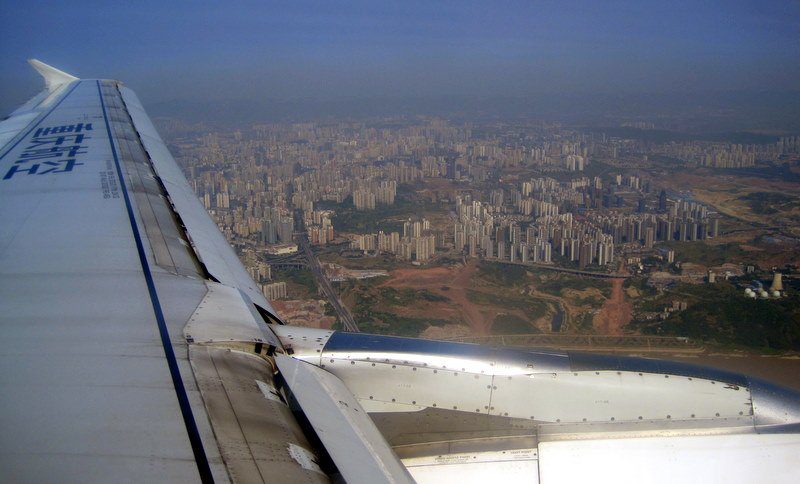 4. The Breakneck Pace of Development. I had heard stories of China’s unprecedented construction, modernization, and growth, but seeing it in person was jaw-dropping. Nearly every five minutes, we passed by another crane erecting a high-rise, or subway train project, or construction pit. This is simultaneously impressive, dizzying, and disturbing, as you hear stories of the human and environmental impact of this growth.

5. History. China has an astounding and frequently heart-wrenching history. It brought tears to my eyes to re-learn about the Cultural Revolution in the country where it actually took place, rather than in a textbook. 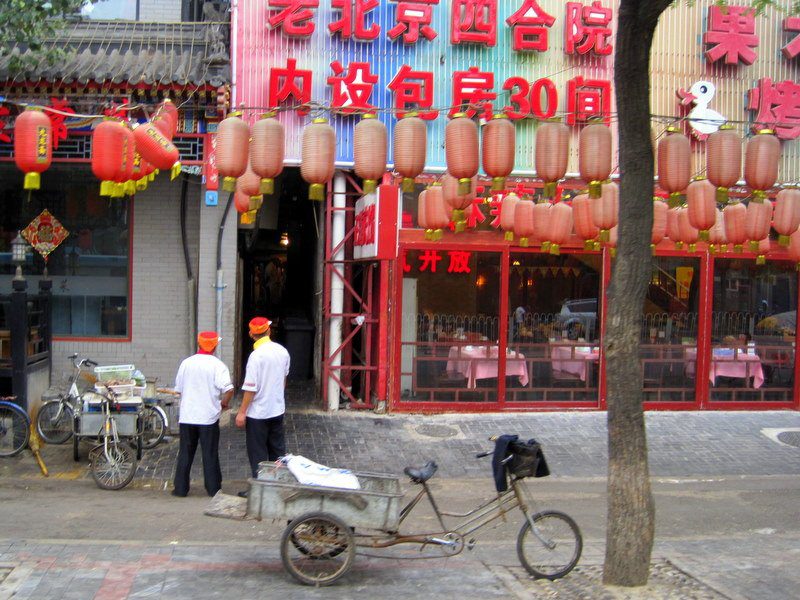 A Beijing street scene. Can you read the sign?

6. Volume of people and distances. I knew China has over 1.3 billion people, and that it’s the third largest country in area, but experiencing being pushed by several hundred of those people in person, and chugging along in a fast train for 16 hours to just get a third of the way through the country… well, wow.

And thus I admit to you, experienced traveler though I am, China was no cakewalk! And that’s a good thing. What’s the point of being in this amazing world without exploring the many other ways that people live in it?

We were surprised by many of the same things you were when we visited China. Then we went to India... You mention that toddlers defecate in public in China, well 2/3 of all people in Inda, 625 million people, poop in public as it's their only option (see bit.ly/QWJJYh). The pollution of China seems quaint in retrospect because it's from factories and development, India is carelessly polluted (i.e. 90% of cities do no sewage treatment before dumping it into rivers).

After spending four months in each China and India we look back on China as amazing for what they're doing. I'd love to see your experiences in both, especially if you make it to the uncrowded, natural parts of each such as Sichuan and Yunnan in China vs Leh and Sikkam in India. (here is our China vs India take http://bit.ly/MilUEN)

Matt, thanks for this heads-up and for the article. We've heard similar warnings, and so are bracing ourselves for sensory overload, given how intense China was for us!

I think it is disgusting that there are trash everywhere in China. I think that people should clean up that mess. It could cost many diseases and it could attract many unwanted pests. I think the cause of this is that China is just overpopulated with people.

China has so much people. When are they going to decrease their population? If I ever go to china it will be impossible for me to walk through all the people.

The sign on the business is a house for families (usually for about four families) and the bottom line is about there are 30 rooms for traveling families. It is a tradition found only in Beijing and is like a union between four families. That is the translation of the sign.

Very interesting! Thanks for the translation!

I know exactly how it feels when you were in China! About 5 years ago, I went to China. It was so hectic because there were so many people there! Well, it is the most populated place on this earth. Even though I am Chinese and was born there, I still have no clue to what people were trying to tell me when I was roaming the streets. There are so many different things about China than the United Sates. First of all, there are different bathrooms (which were very awkward by the way!), food, utensils to eat with (chopsticks), etc, but it was a great experience! It was cool how you went to the Great Wall of China and the Forbidden City. I went there too! The Great Wall was so steep. You kept on going up and down. The hardest part was the number of people. It was jam packed!!! My adventure to the Forbidden City, well this is a funny story. When they were giving a tour, they said "And right over there is China Town!" My mom whispered to me saying "Wow, we are really close to Boston, if over there is China Town." She was joking about our China Town in Boston. I thought it was really funny how China has a China Town too! There was so much I did in China for three weeks, but I do not want to bore you. I went horse back riding, made shadow puppets, I had a foot massage, and so many other things. One cool thing I did in China was make pictures from crushed glass It was so much fun!!! I Hope you had fun in China like I did!