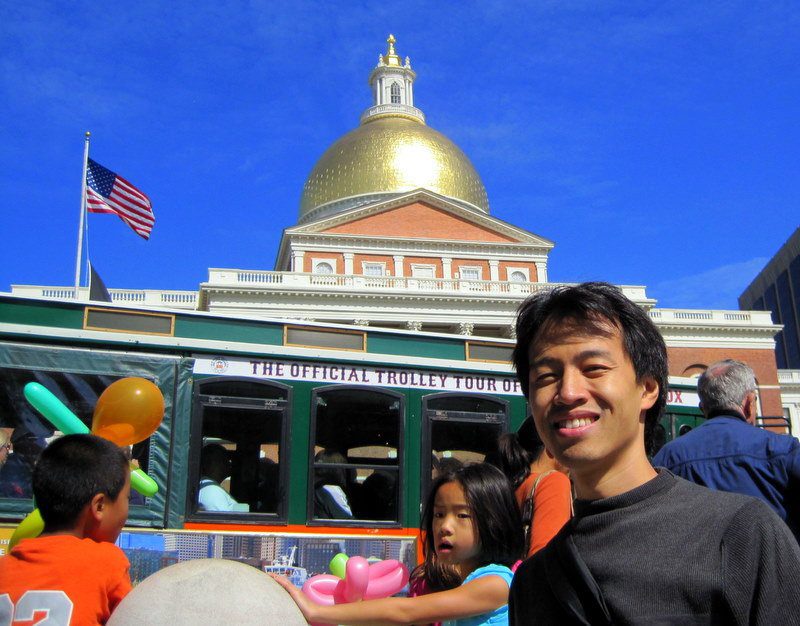 My friend Angel in front of the State House before our tour.

The first hint, around 2009, that Boston is becoming a hub for filming big movies was that our Charlestown High school announcements started filling with casting calls for “teenagers with strong Boston accents.”

The next hint was last year when seven giant movie trailers set up shop down the street from my apartment and flocks of locals gathered to catch a glimpse of Mila Kunis filming “Ted.”

But it took a guided group tour of Boston TV and Movie sites from On Location Tours for me to really get the extent to which Boston has enhanced the world’s screens. 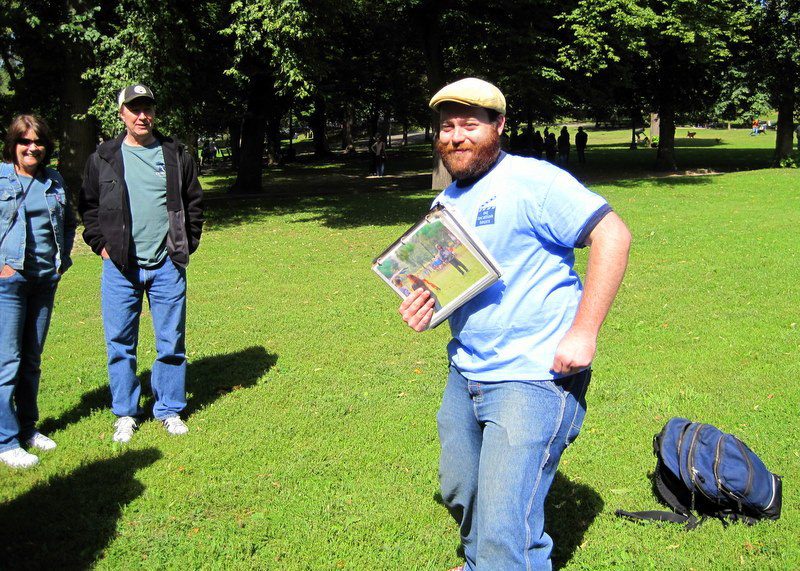 Our guide holding a photo of Matt Damon in that very spot.

My friend Angel and I arrived for the tour at 10:45am sharp on Boston Common, atwitter with excitement. It was a beautiful, crystal-blue-skied day, and the Common was packed with other themed tour groups, including several tour guides dressed as Ben Franklin and other founding fathers who seemed a bit peeved at the crowd our guide, Dave, was attracting. History? Ho-hum. Movie and TV sites? Amazing!

We had a busload of people (literally!) by the time we started moving. Our guide paused briefly in the middle of the emerald-green common to hold up laminated photos of movie scenes filmed where we were standing, including Matt Damon playing football in The Departed. Dave very kindly did a jig for us as I snapped his photo. 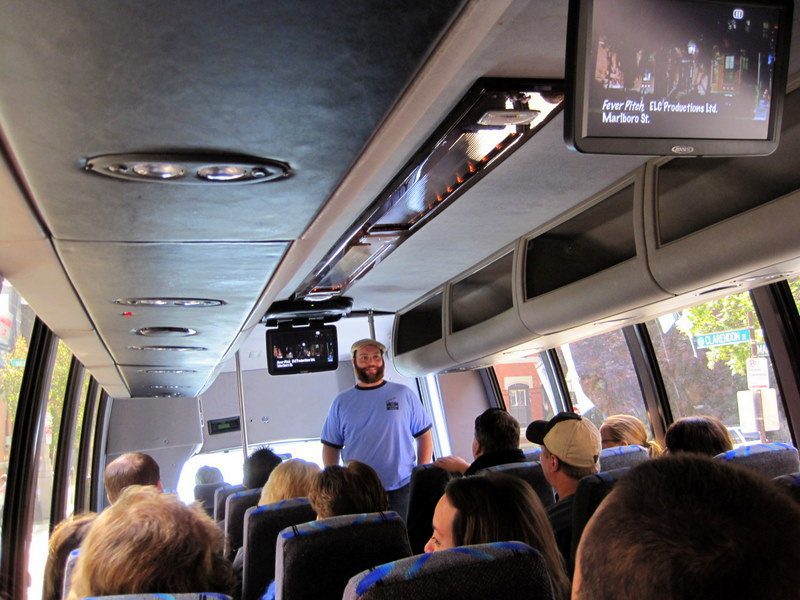 The tour bus, our guide, and the handy film clips.

Then we climbed onto a cushy bus, and movie screens descended from the ceiling. I hadn’t realized this was how the tour would be structured, but what brilliant idea!

For the ensuing three hours of our tour, we alternated between watching clips of movies, hearing our hilarious guide elaborate on them, looking out the window as the bus rolled by sites, and (every fifteen minutes or so), hopping out of the bus to set foot in particularly special sites ourselves.

In this manner, we saw over 40 movie and TV sites (!) in all different sections of Boston, learned a pletora of fascinating film tidbits, and had a thoroughly enjoyable time. 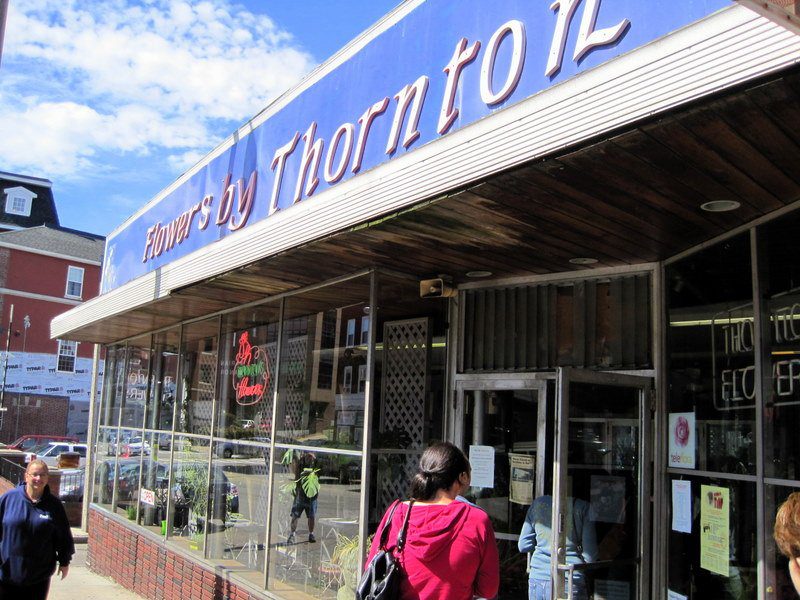 The flower shop from “The Town”… in Southie?!

Remember the Flower Shop from The Town where so much of the evil action and plotting takes place? Well it turns out it’s in South Boston, not in Charlestown!

We walked right in and got to chat with the owner, who explained that the movie producers had chosen her store because “they were looking for a flower store that seemed like it had a lot of stories to it… basically old and worn.”

And since we were driving through Southie, you can bet that the Good Will Hunting bar, the “L Street Tavern,” was on the tour. 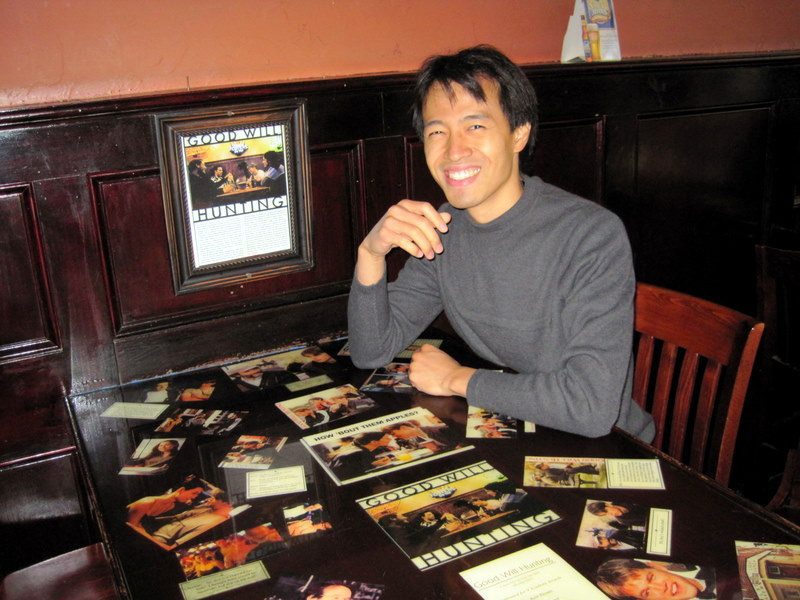 Angel posing where Matt Damon sat in the movie!

The walls in the tavern were covered with Good Will Hunting posters and articles, and we all took turns sitting at the very table where Ben Affleck, Matt Damon, and Minnie Driver’s elbows rested.

When we got back on the tour bus, would you believe that our tour guide had bought us all doughnuts?! Amazing!

Angel and I snagged what we thought was Boston Cream Pie and were very disappointed to discover that it was a decoy and in fact was just Chocolate Frosted Plain. Alas.

More TV and movie sites slid past our windows: the Ally McBeal office. Drew Barrymore’s apartment from Fever Pitch (a movie I’m embarassed to admit made me sob during a plane ride far from home because it made me miss Boston!). A Paul Newman movie. Old movies and new movies. Popular TV shows and rapidly-cancelled ones. 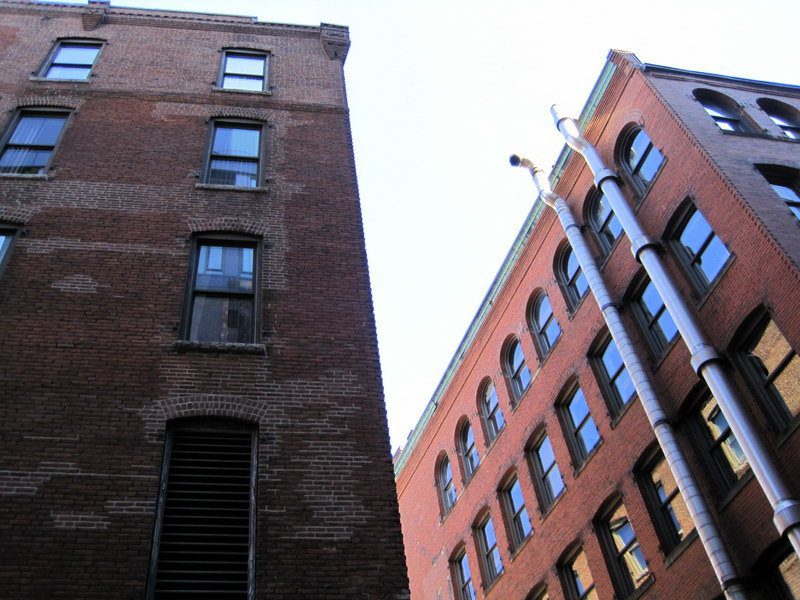 The building from the climactic “The Departed” scene.

The on-bus movie clips certainly helped, because a person’s memory for movie and TV scene knowledge is really only so sharp.

Then we got off the bus near Fort Point Channel to see the building from The Departed where (trying not to spoil this phenomenal movie for you) a very important ending scene occurs.

Our guide made us crack up by:

1) Explaining that the producers caused utter panic in the Children’s Museum (next door) by repeatedly throwing human-shaped dolls off the roof to film the murder scene. (“Mommy, why are there people jumping off that building?”) 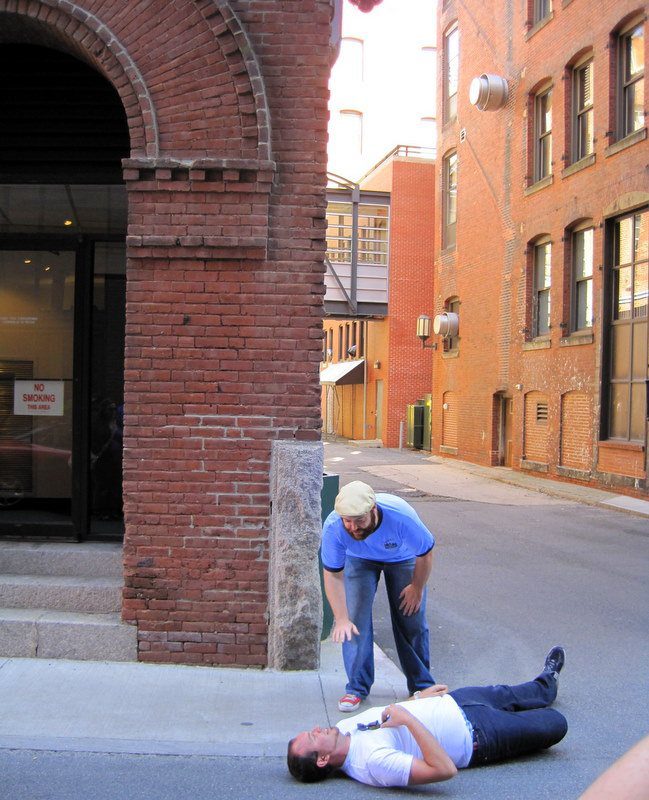 Our guide egging a group member to pose “dead”!

2) Egging on one of our group members to lie on the ground where the pushed-off-the-building character fell. (He was brushing off gravel and cigarette butts for the rest of the trip, but his sacrifice created some great photos and giggles!)

Our guide also explained that the filmmakers had used three different buildings for the shots: One for the doorway, another down the street for the rooftop, and yet another across the street for the fire escape and alleyway. Ahh, the magic of film. You’d never know!

Now it’s time for a short rant about the portrayal of race and class in Boston. In the entire 3 hours of movie and TV clips on the tour, every single face on the screen was White. This has become THE Boston movie format, and it’s really annoying and inaccurate.

To be more specific, there are about thirty popular movies now which feature a teeming cast of poor, violent, White Boston thugs with thick “R-dropping” accents. Examples include: Good Will Hunting, The Departed, Mystic River, The Town, Gone Baby Gone, and many more. 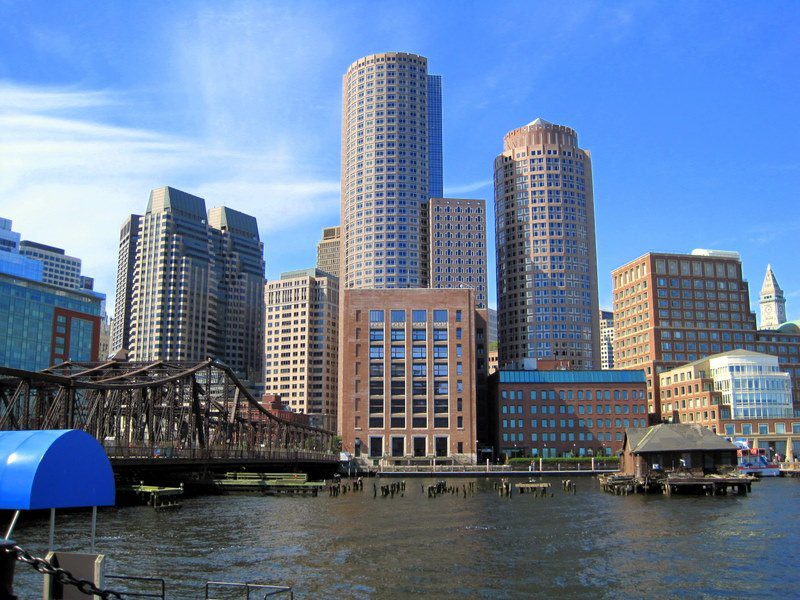 While this may be entertaining for some, for a Bostonian who knows that this “poor, violent, White, accented” population composes a non-majority percentage of our actual Boston population, this blatant misrepresentation is highly irritating.

“Wait,” some people have asked me (after inquiring why I don’t have an accent), “there are Black people in Boston?!”

YES. For those of you unaware, Boston is a highly diverse “majority minority city.” The student body of Charlestown High School (the school in The Town) where I worked for 5 years is: 40% Black, 27% Latino, 26% Asia, 6% White, and 1% “Other.”

That beautiful mix of ethnicities and backgrounds is completely invisible, hidden, and ignored in every single movie about Boston I have seen. This is just one of countless inaccuracies in film and TV, but it’s one that repeatedly hits close to home for me. 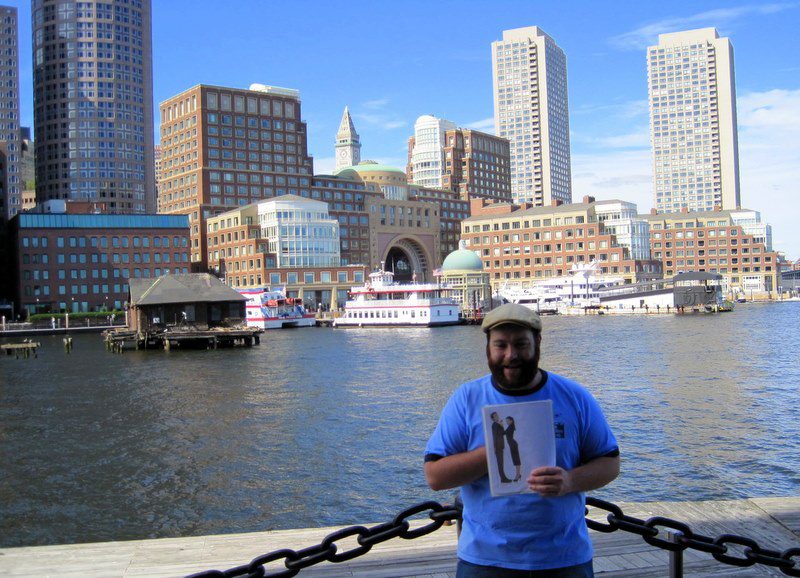 Playing the game of “name the filmed-in-Boston movie!”

End of rant for now.

Our tour continued by the beautiful waterfront view of the Boston Skyline which Leonardo DiCaprio paces in front of while talking on the phone in The Departed. I’ve always loved this view, with its rich blue water and glistening tan-gold skyscrapers. I like tugging at the nautical-themed metal “rope” guardrails!

Our guide had us gather around then to play a game. He held up the posters — minus the titles — of movies that had been filmed in Boston but didn’t admit it. We had to guess the name of the movie. A smart way to teach us the many films that used our city as a set! 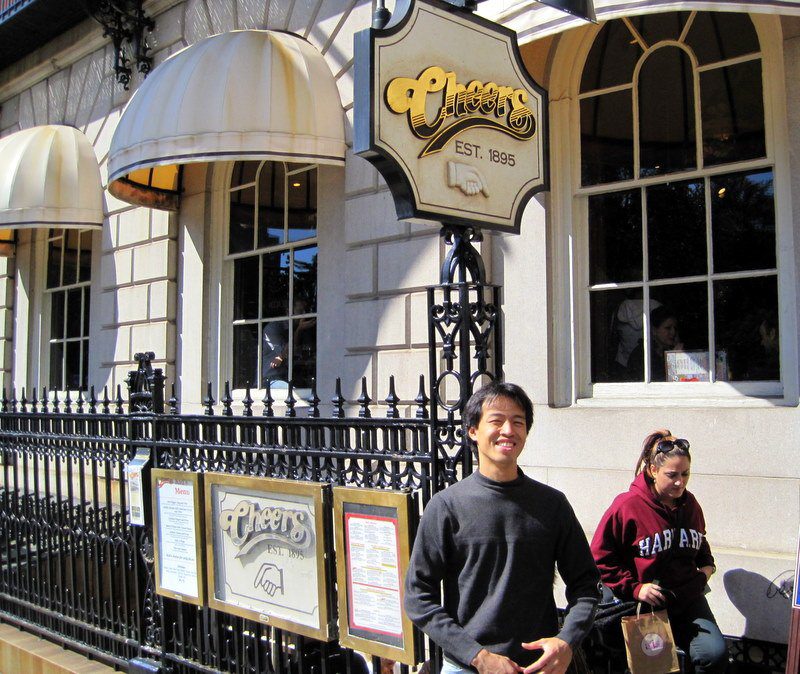 Angel with the famous sign from the “Cheers” TV show.

Movies we learned that take place in an anonymous city which is really Boston include: The Proposal, Paul Blart: Mall Cop, Furry Vengeance, and several other gems.

Our tour ended on the corner of the Boston Common at — where else? — the place where everybody knows your name: Cheers!

Angel and I posed at the iconic sign, and then peeked in. The inside looks nothing like the TV show! But so it goes.

With the theme song of Cheers stuck in our heads, we bid goodbye and thank you to our excellent tour guide, received a surprise free movie pass to A Dolphin Tale, and got a sandwich on Charles Street to eat outside in the gorgeous Public Garden. Thanks, On Location Tours, for a great day!

The Town is one of my favorite movies.

I was born in Southie. :D

So cool. I thought the man was really dead and I've noticed that a lot of movies with Adam Sandler were filmed in Boston.

Wow! That must have been fun, I remember a time when my mum was driving my younger sister and I through Downtown and there were so many people crowding around. Then my mum drove through that place and my sister and I were placing bets that they were filming a movie or constructing a new building. It turns out that I was right, it was movie because of all the lights and those trailers. It was so much fun! P.S. I love Mila Kunis! She's a great actress!