A Warning About Your Dream of Visiting or Moving to Barcelona 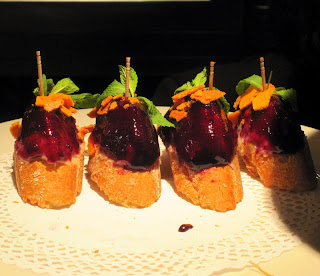 Look at that plate of Spanish tapas to the left.

Can you guess what flavor and food is sitting atop those slices of bread? Is it sweet or savory? Does it consist of fish, or cheese, or vegetables… or white chocolate? Is it soft or hard? Creamy or crumbly?

You really can’t tell until you bite into it, can you!

The same goes for cities. You can hear hundreds of hours of talk about how freaking fantastic a certain place is, and you can view ten thousand photos of its sunny streets and towering spires… But until you are standing there in person, smelling its real-life air, you can’t really begin to taste it.

This is to say: I’m quite glad that I changed my original travel plan. 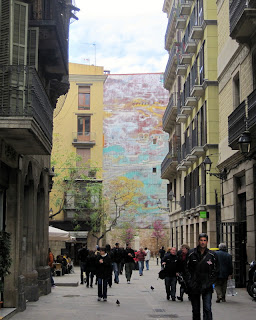 Perhaps you didn’t know this, but I wasn’t supposed to be traveling around the world. No! In fact, the scheme I told everyone for months and months at the beginning of my trip planning was that I was going to move my life to Barcelona, Spain, and live and work in that lovely city for a full year.

It was only later that I realized that if I was going to take a whole nine months off, I might as well see the other side of the world, too, since expenses would balance out in the end given the relative cheapness of continents besides Europe.

So, when my bus finally pulled into Barcelona this Monday at six in the morning, after eight hours on the road from Madrid, and after eight months of traveling through Asia and Africa, I was quivering with anticipation. What would my dream city be like in reality?

Here is the answer: I am having a fantastic week here in Barcelona because my hosts and new friends are fabulous… but the truth is that this city does not look or feel anything like what I imagined, and I now realize that I made the right choice in not moving my life here. 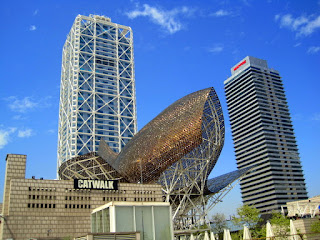 Do you have a dream city? Is your dream city, in fact, Barcelona? I am positive I could have made a great life here, and I’m sure you can, too… but let’s take a good hard listen at voices from on the ground here.

When I told my Spanish host in Barcelona (the distant cousin of a schoolmate of my father’s… yes, I know this is another miraculous chain of hospitality like in Japan, and Bangkok, and Madrid!) that it is a somewhat common American dream to want to pick up and move one’s life to Barcelona, my host looked me in the eye and asked very bluntly: “WHY?”

“I don’t know,” I stuttered, “I mean, like a lot of people, I guess imagined Barcelona to be positively bursting with color and dancing and partying in the streets… I imagined art everywhere, and warm weather, and beauty left and right!” 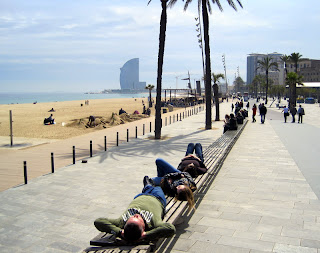 But I couldn’t help but agree with the words of an Italian woman who I met yesterday as she examined her shattered illusions. “Maybe it’s just the weather,” she said, “but Barcelona just looks gray to me right now. I just don’t feel the energy I thought I would. And it’s cold!”

My host chuckled when I told her what my dream Barcelona looked like. “This is just a city like any other,” she said. “We go to work each weekday. We party a little… but not so much.”

And what about the sights? As a tourist in Barcelona, it is very possible you may go to Gaudi’s La Sagrada Familia church (pictured, left), which you have been longing to see for years– and have trouble seeing it behind the throngs of tourists and construction cranes. It’s still stunning, but will you wait the two hours and pay the hefty fee to enter? Perhaps not. 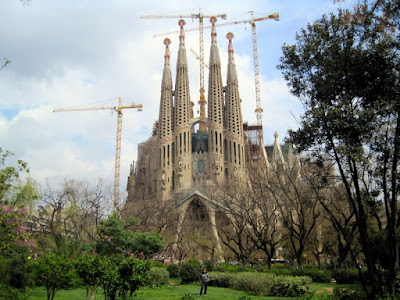 “OMG, HOW CAN YOU NOT LOVE BARCELONA?!” typed everyone who heard I wasn’t obsessed with the city yet. “I LOOOOOVE BARCELONA!”

“When were you here?” I asked.

“I was fifteen, on a school trip,” typed one. “I was nineteen,” typed another, “and come to think of it, it was before I had really traveled anywhere else.”

“It’s actually making Barcelona lose some of its charm that there are so, so many tourists here, now,” admitted my Barcelona host.

“I love Barcelona,” said my friend Sinead who moved here from Ireland four years ago, “but I am working so, SO many hours just to pay my rent that I hardly have time or energy to go out. My salary is awful as a foreign English teacher who doesn’t speak Catalan, and this is an expensive city! And you really have to watch out for all the pickpockets.” 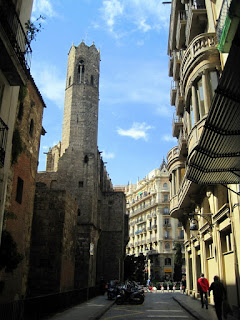 “I’m having some problems,” sighed to me a 32-year-old American who sold his car dealership and followed his dream of moving here three weeks ago, “because I thought I would learn Spanish quickly, but all the signs are in Catalan! And also I had this idea that people would be really friendly… but they haven’t really been.”

“Aww, I LOVE Barcelona!” typed a woman on Twitter when she caught wind of my disillusionment. “I felt disappointed at first like you, but after living there for several months, it really grew on me. By the time I left, it had become my favorite place ever!”

This I believe. I COULD live here and meet more wonderful people and eat more delicious food and have an utterly lovely time.

But let’s go back to that plate of tapas again. The answer to what is on top of the bread in the first picture is: creamy white cheese coated with sweet berry jam. Did you guess it? Indeed, that particular tapa was pretty tasty… but there were other tapas I ingested that I found even more delicious. 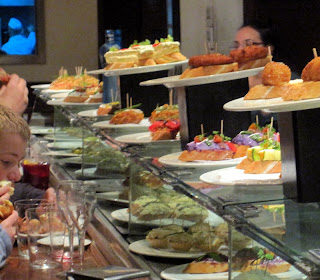 And like tapas, like cities. Everyone and their mother seems obsessed with the idea of Barcelona lately… but once you bite into it, it may not be quite the taste that you imagined!

The moral is simply this: Sometimes it’s wise to browse the other delicious options out there, too, before you gorge yourself on one single dream… or cheese and jelly tapa!

Parque Guell: At the Center of the “Too Much Tourism?” Debate
Read Next Post →
Click here to cancel reply.

I visited Barcelona about 12 years ago and hated it. Gaudi, La Sagrada Familia and the Gothic Qtr was nice but I found it boring and the food was dire. Tapas? What I saw looked like display food that had been on display for a week.

I adore the Spanish cities; Seville, Valencia, Granada....Wow ! All of these were fantastic. Great weather, culture, history and abundance of great food. Even Madrid got my heart. Some of the best Tapas I ate were in Madrid. Honestly, give Barcelona and its hatred of tourists a wide berth. Who would really want to go where they're not welcome and probably get pickpocketed in the process?

Thanks for sharing your experience! Since writing this article, I know there are many different opinions on the city, but the bottom line is it’s never a good idea to put all one’s hopes and dreams into one place or thing —- there is so much else out there in the world!

Being from Barcelona myself I found your article really amusing. So you wanted to have tapas all day long?. Well, tapas are not a traditional Catalan food. Not that they can not be found (you can find many foreign foods in Barcelona) but sure not the best food available. Then comes the guy that goes to the capital of Catalonia and is annoyed because many thing are written...in Catalan!!. Who would have imagined that?. I hope that if he goes to Paris is not disappointed, because everything is...in French!!. Another good one is the girl that finds an European city with 4 of 5 million people expensive. What was she expecting?, the prices of Blaenau Gwent perhaps?. A good idea would have been to look into the local knowledge, for example the well known adage "Barcelona es bona...si la bossa sona!!" or, translated, "Barcelona is good...if your pockets are full!!". A good laugh, really.

Barcelona is a beautiful city full of life. I visited 3 times for the last few years. I stayed in a hotel, apartment and cruise ship. Always have great time, walking for hours, visiting museums, markets, churches, cafes, shopping People are helpful, not snobbish. I leaved in South Africa, Canada and now in Florida. I have little business in a tourist area and work 12 hours a day for months wit no days off . It took me 10 months to lease the place, going every single day to management. There is burrocracy every where in the world. If the salaries are low in Barcelona work extra, open your own business. If you wondering to move take your bag and go quickly, don't listen to complainers. You have nothing to loose you can always come back to your country and make a few dollars more. I admire hard working people in the city coming from China , Pakistan East Europe who keep their places open 24 hours. I wish I know more about open business there I see a lot of opportunity there.

I would like to hear peoples comments regarding Valencia (the city only) compared to Barcelona regarding expat experiences and in particular the many bad aspects of Barcelona described in previous posts. How do people feel Valencia is comparable or incomparable to Barcelona now and in the future. I am having difficulty deciding between Lisbon and Valencia to live any views?

hi every one i travelled alot , and last year i visited Barcelona and i loved it ,.since then im thinking to move there ,is any body know how is job situation in Barcelona , im an architect but i dont care if i have to change my job . tanx