2011 in this Travel Empire, and Madrid Night Photos 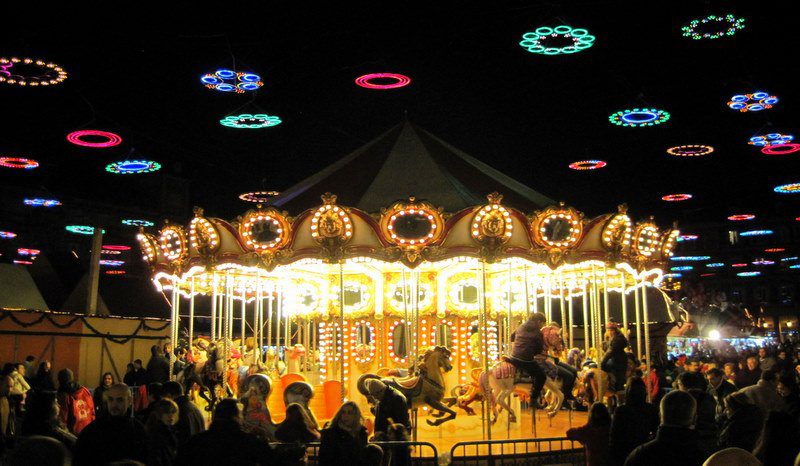 The carousel in Madrid’s Plaza Mayor spins gold under rainbow circle lights for the holidays.

What a year it’s been, eh? As December 31, 2011 draws to a close, here are some glittering photos of holiday-decorated Madrid, Spain (as snapped last night), along with a kind of “State of the Union” run-down of statistics from this teaching-traveling website empire for 2011. (As always, click blue-highlighted words for related articles.) 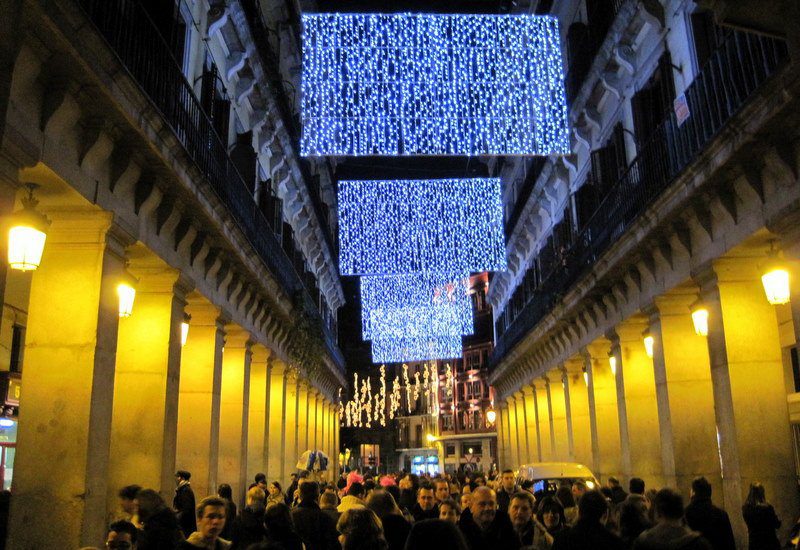 Spain’s historic, packed streets are gilded with lights. Walk with me! 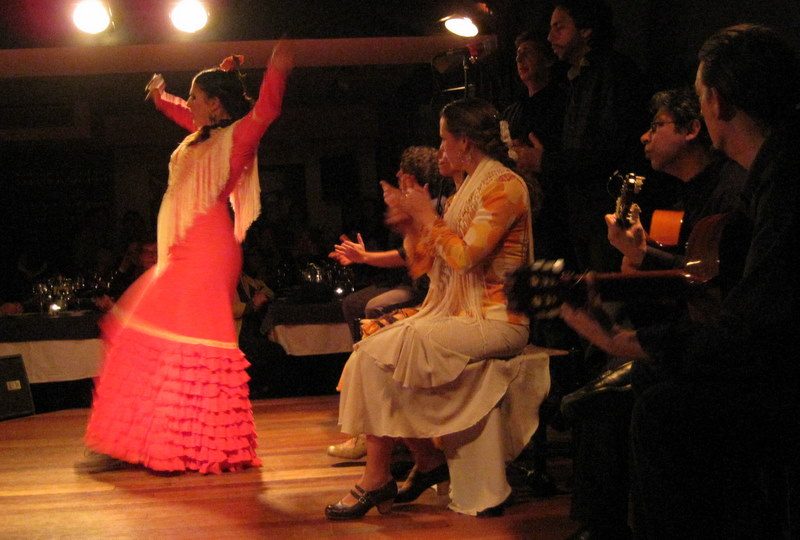 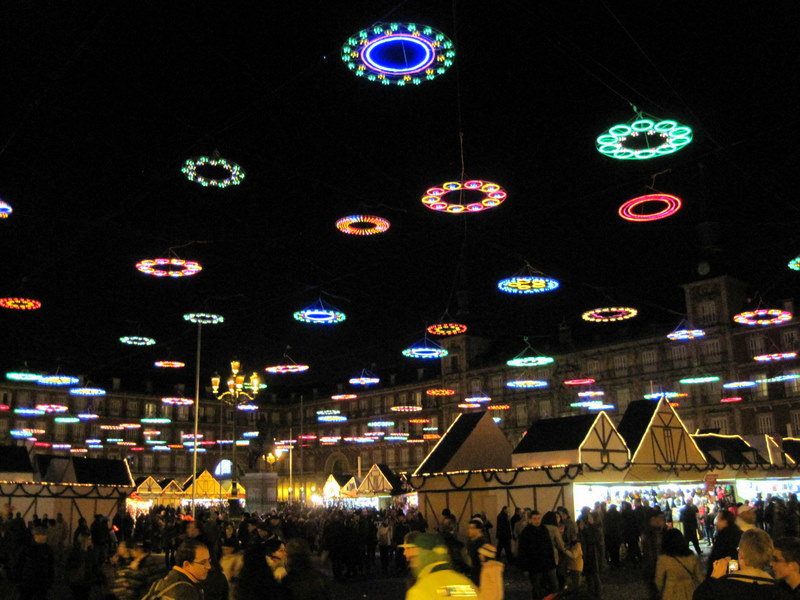 The lights in the Plaza Mayor look like benevolent UFOs above the gift stalls! 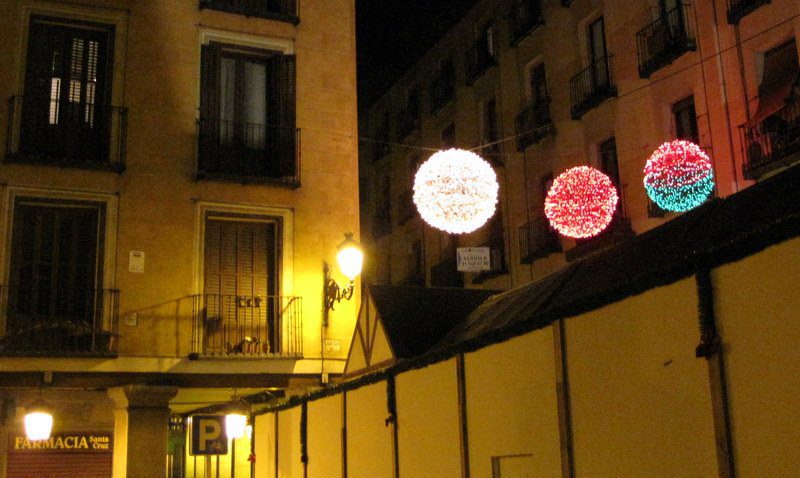 Glowing balls of light hang through the centuries-old streets of Madrid.

2012 embraces us with sparkling diamond arms of happiness and anticipation. 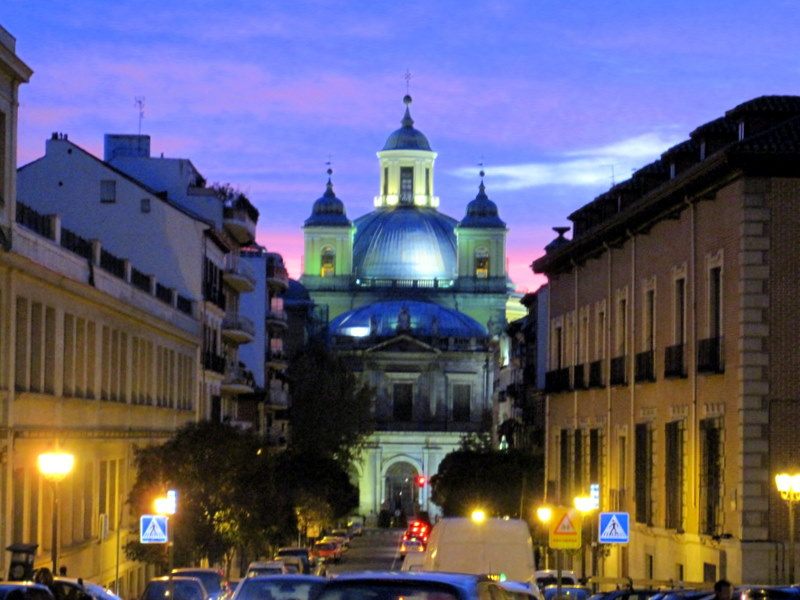 Hello From Madrid, Spain! How Different it is This Time!
← Read Last Post 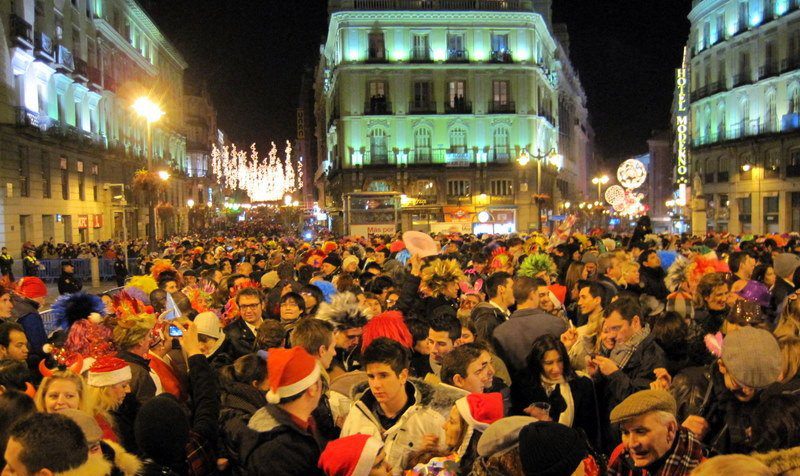 Celebrating the New Year in the Times Square of Spain!
Read Next Post →
Click here to cancel reply.

This looks so colorful I feel like I could touch it as if it was near me.

You've visited so many places in 2011! Almost everywhere you went was the places I want to go when I get a chance. I really want to go to Spain, since the articles and pictures you posted up was delightful!

If it was all vegetarian, then did you have any stuffing??

Read the article to find out! https://www.aroundtheworldl.com/2011/11/26/my-first-vegan-thanksgiving-was-delicious/

2011 was such a fantastic year for you -- congrats on everything you accomplished! I'll be in China in February, too -- how fun. :)

I want to go to Bejing! :( The lights in Madrid look amazing from the pictures, and I've never been on a plane before. :D

Oh, I'm flying in and out of Beijing! I'll definitely be in the Beijing area on Feb. 3-5 and for parts of the days Feb. 10-11. It would be super cool if our paths crossed, but if not, I hope you have a wonderful time anyway!

Thanks so much, and yay! We will be on an ultra-whirlwind 5-day tour around Beijing, but if there's a chance of us crossing paths, let me know!

Oh my. The lights are so bright. They remind me of light pollution in Japan and Taiwan (the two countries with the highest light pollution). The lights look like they are floating, just like UFO's. There are UFO's above everyone's heads then. :D