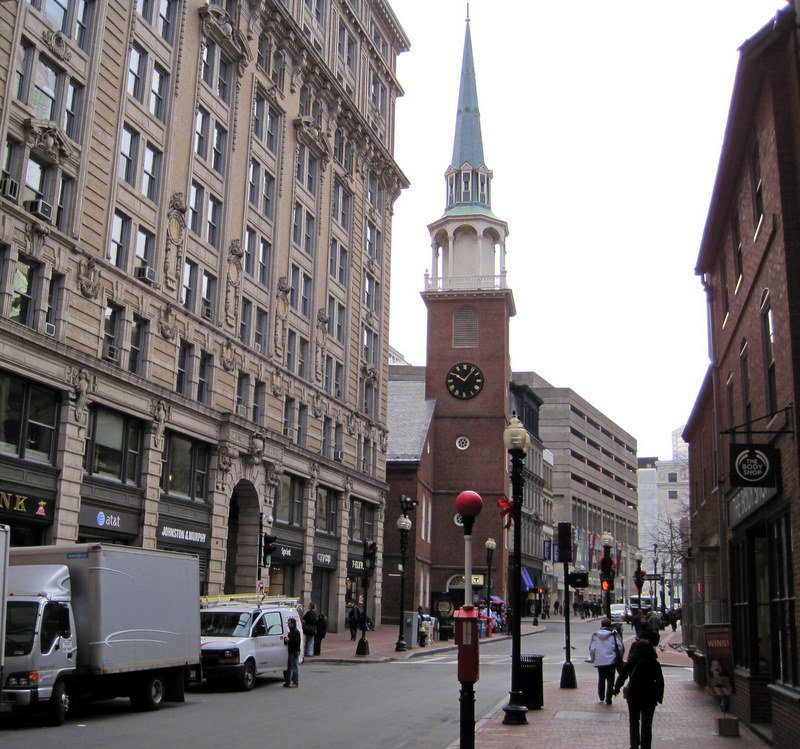 The first thing you must know is that Teachers frequently make atrocious Students.

We’re used to be the ones doing the explaining. We’re used to being in control. Our job necessitates that we move and talk constantly in order to be effective, not sit obediently and listen.

Hence, ironically, Teachers can be really annoying folks to have on the other side of a classroom.

This is to say that when a friend suggested that I check out Context Walking Seminars of my own city, Boston, I balked at first. “Whiiiine,” I whined, “But it’s my weekend! Why can’t I just sit around and do nothing?” Thank heavens I came to my senses and booked the Context Seminar… because it was great!

The concept of Context Walking Seminars is lovely: A professional scholar, specialist, and/or professor leads a very small (or upon request, private) group of “intellectually curious travelers” or locals around the hidden nooks, crannies, and little-known facts of the Great Cities of the world. 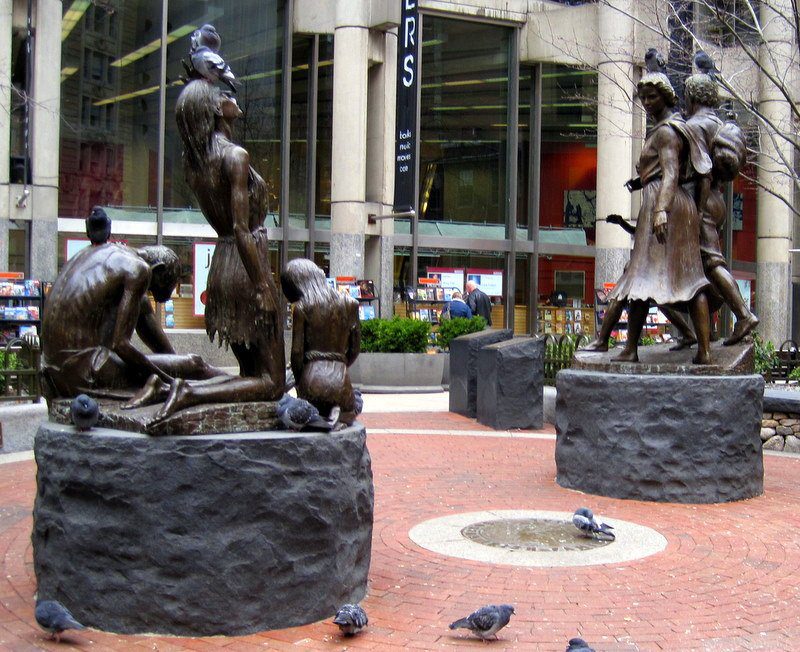 The Irish Famine Memorial, were we stood to start our Seminar. Pigeons have no respect for the famine, nor public art!

Context operates in Istanbul, Philadelphia, Madrid, and Athens, among other places. Since Boston is a Great City (woo hoo!) there are more than half a dozen different Context Seminars offered on different Beantown topics, from “Boston Brahmins,” to the Museum of Fine Arts, to the North End. Since I have a giant Big Dig fetish (more on this later), I lustfully enrolled in the Big Dig seminar. Exciting!

Here was my vividly- imagined prediction of how the Walking Seminar would go: We would all don thick protective jumpsuits and dive down into a secret pipe (akin to those in Mario Brothers, with the same “shh-shh” sound effects) which would shoot us deep into the bowels of the Big Dig itself.

I pictured our tour being stopped by a Big Dig policeman (with dark circles under his underground-accustomed eyes), who would bark: “What are you doing down here? NO ONE is allowed down here!” Then we would all take out secret Context badges, which would cause the guard to jump, bow reverentially, then say, “My mistake! Enter into the secret tunnels behind the main tunnel, oh intellectually curious voyagers!” 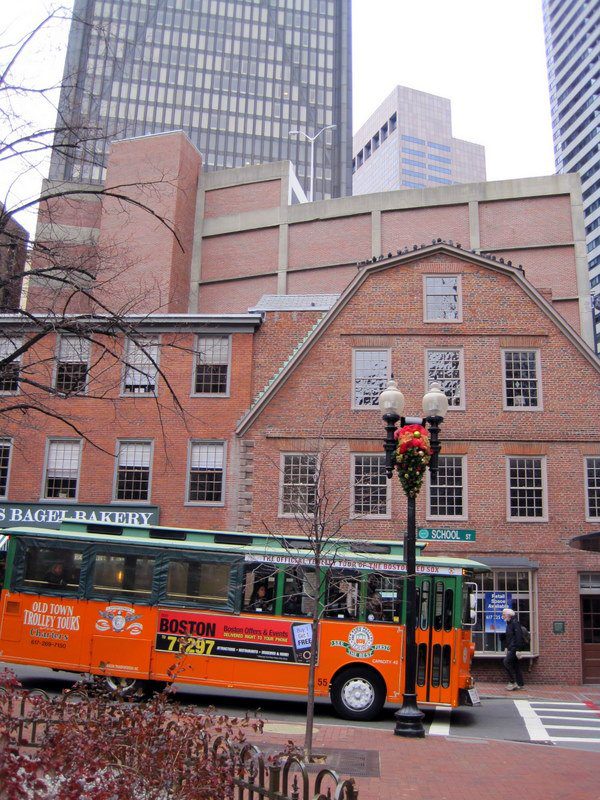 We don’t need no tour bus, we have our feet. (Note the pigeons perfectly coating the historic building.)

But that’s not what happened.

In fact, there was no underground spelunking element to our tour at all. And that was just fine, because I was wearing a new sweater and didn’t want any gloop from secret pipes on it.

The name of the Context Tours company does not lie: It’s all about CONTEXT.

“What exactly is “Context,” again?” you may be asking. Well, if you are a lucky duck who is in my English class, you would know there’s a little dance we do to illustrate what Context is: Wave your arms up, down, left and right (preferably with jazz hands)! What this means is that “Context” entails all the juicy details that surround something, be it the sentences that surround a difficult vocabulary word, the time period in which a particular novel was written, or, in the case of the Boston Walking Seminar, the facts, buildings, and historical progression surrounding the creation of the Big Dig itself.

At 9:30am on the appointed Saturday, I showed up under the awning of a certain bagel shop in Downtown Boston to meet my gang for the day. Coolness: it was just me, three other friendly New Englanders, and the extremely amiable, knowledgeable Docent. True to Context’s ethos, our Docent turned out to be a bona fide Professor of Architecture who had done googobs of research on Big Dig-related topics in her illustrious career. 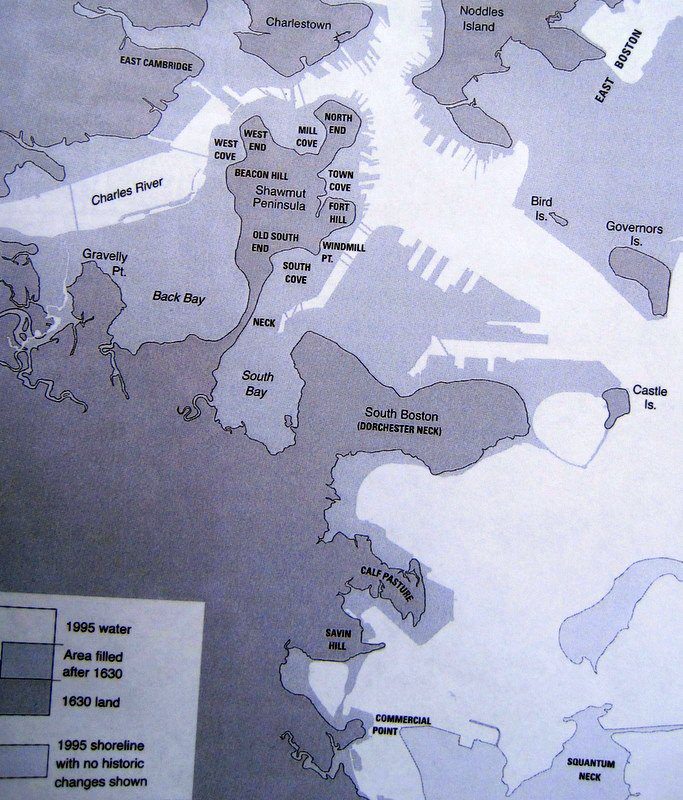 Study this map and see how much of Boston is landfill!

We introduced ourselves, and then our Docent took out a thick folder of goodies to kick off our Context-izing… most notably, the map shown here to the right.

Really take a moment to study this diagram and understand what it means. When you got it, did your brain just explode?! It shows how all that light gray part of Boston on the map (Back Bay, South Bay, East Boston, a bunch of Cambridge, etc.) used to be swamp or underwater! Then hard-working folks after 1630 leveled the hills in town and painstakingly placed that dirt in the water to create the land we now dance around today.

WHAT?! That is AMAZING! Truly take a moment to honor that accomplishment. Let’s not take for granted the paths beneath our feet, Bostonians!

Our Docent then pointed on the map to the tiny neck of original land between the round bulb of Boston proper and the mainland. “Can you guess which street stretched down that narrow piece of earth?” she asked. We looked around us, as we knew the answer must lie near.

“Washington Street!” we realized. Indeed, think about how central Washington Street is in connecting Boston. It has an extra special place in my heart this year, especially, as I now commute right down it each day on the Silver Line between Downtown and Dudley Station. It’s a thrill to realize how the past shaped the present! 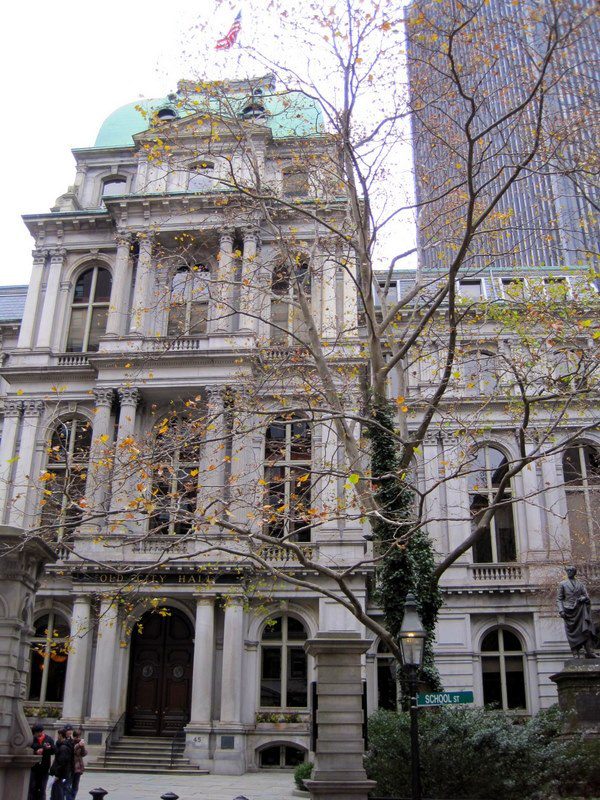 Boston’s Old City Hall, so different from the New.

Our Docent then pointed back to the map. “Notice,” she said, “how, back in the day, there was no land connection between South Station and North Station.”

We nodded, and remarked that today there may be a land connection, but there is STILL no rail link between the two.

“Keep that in mind,” our Docent said, “because this desire for a South-North Station link is behind much of the subsequent development of Boston, right up until the Big Dig.”

On the map, our Docent then pointed out several more cool tidbits. First, though people joke that Boston was laid out by cows, if you really look at the history and topography of our cities, you will note that the winding (a.k.a. confusing, a.k.a. ridiculous) street patterns trace back to paths that ran around the hills: hills which no longer exist because they were leveled in order to fill in the swamps and create the land we now take for granted!

Second, ever since Washington Street was the only connector between Downtown Boston and the mainland, we Bostonians have had too many people to transport in too small a space! It’s our heritage, and innovations to address it have been on our mind for centuries. (Literature-loving students, can you see some foreshadowing for the Central Artery and then the Big Dig???) 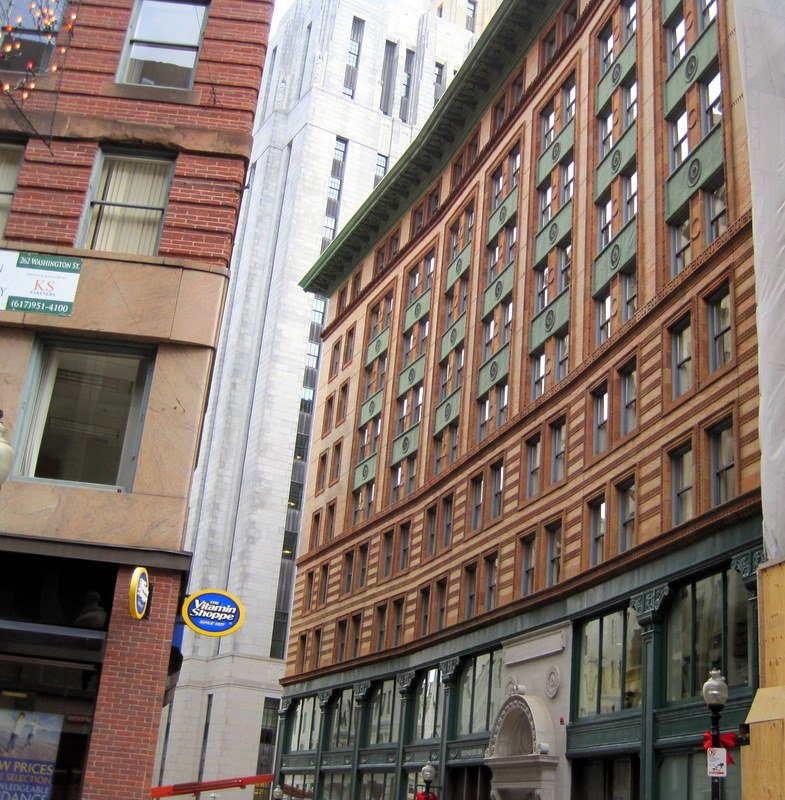 We began to walk. First, our Docent pointed our attention to the second building shown in this article, followed by the lovely Old City Hall (not to be confused with the brutal New City Hall) down the street. She explained that these early buildings still really reflected European architectural influences, as America had yet to really develop its own distinct identity. (Ahh, those awkward teen years.)

As we continued along, however, and the “vintage” of the buildings became newer, America’s architectural voice began to emerge. Our Docent took us right up to one of her favorite buildings: The Winthrop Building (pictured to the right) which is one of the earliest examples of steel architecture in history! Building with steel was essential because in the 1800s, cities had frequent fires, and steel has the benefit of not melting so easily (and no one likes a melted building).

Our group stood by the Winthrop Building for quite a time, admiring the fact that it’s curved instead of straight (!), ogling the jaunty green, red, and yellow pattern, and cooing over the delightful green, circular decorations under each window. Our Docent explained that steel construction allowed a whole new realm of architectural expression distinct from European heritage. Check it out: I’ve lived in this city my whole life and passed this building a zillion times, but I’ve never even noticed it, let alone had a hint of its significance! 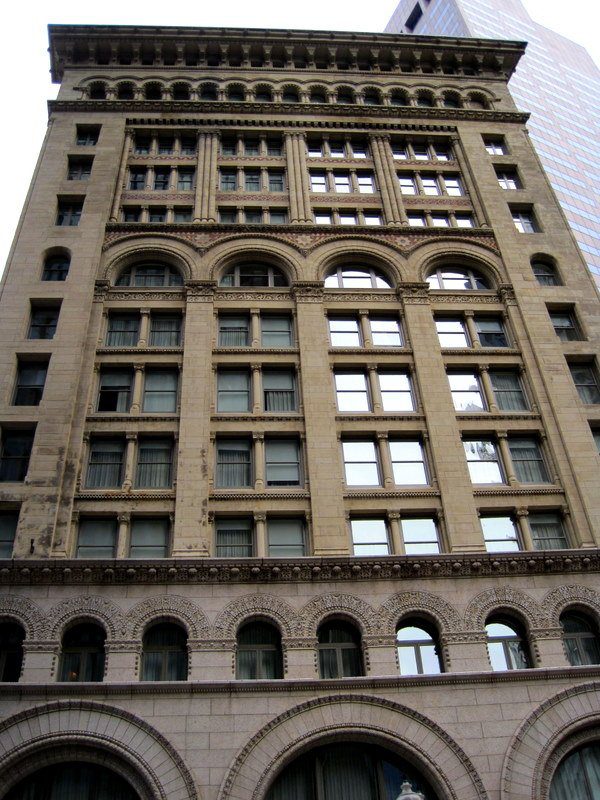 Onward, to the Ames Building (pictured to the left): another structure I’ve never given a second glance to! Turns out that the Ames Building was Boston’s first “skyscraper” (sounds crazy now, that that little thing could seem to scrape the sky, right?), and remained the tallest building in our town from 1893 to 1915.

Our Docent breathily showed us how the architect had crafted the building: to “stop the eye:” breaking it up artistically into levels and parts, much like a giant-sized column with mini-columns within it. “From afar,” our Guide explained, “you may not be able to see the details, but you do certainly see the lovely dance of light and shadow!”

Truthfully, I never before saw that dance on that building… but now I sure will!

At this point, as I write this, my bus from Philadelphia to Boston is in hour three of being broken down by the side of the highway. It’s getting cold in this bus, and a little stinky. I’m laughing, thinking how, for all our American innovation and progress, we still have a long way to go! Oh, “Developed World…” you’re giving me flashbacks of my bus breakdown in Thailand, and my 30-hour bus from Vietnam to Laos.

And thus at this point I shall pause this Context Walking Seminars tale mid-way to warm my hands and stretch. Stay tuned as we move from Downtown towards the Big Dig site, scooping up context and fascinating historical facts along the way!

Woo hoo! Thanks! The craziest part to me is still the fact that we were mostly swamp before the landfill fun. Keep your comments coming :)

Wow I never knew that Boston was part landfill. I still love Boston very much though.

Very informative and fantastic enthusiasm!! I've had an experience also relating to the police officer in the Big Dig site at my job. Reason being that I'm a fairly young person to be working in Harvard, so the first few times i went to work i was asked for my I.D. ten they would apologize for the inconvenience. Anyways, I loved the article and I second Drew's remark on the fact that Boston has many places and elements of Boston that make it so awesome!

I saw a diagram similar to the one above in the Hancock Building years ago. I vaguely remember the landfill expansion evolving over the years. I also remember that corridor of land still being relatively small during the Revolution. The history of Boston's expansion is one of the many things that make Boston as unique as it is.