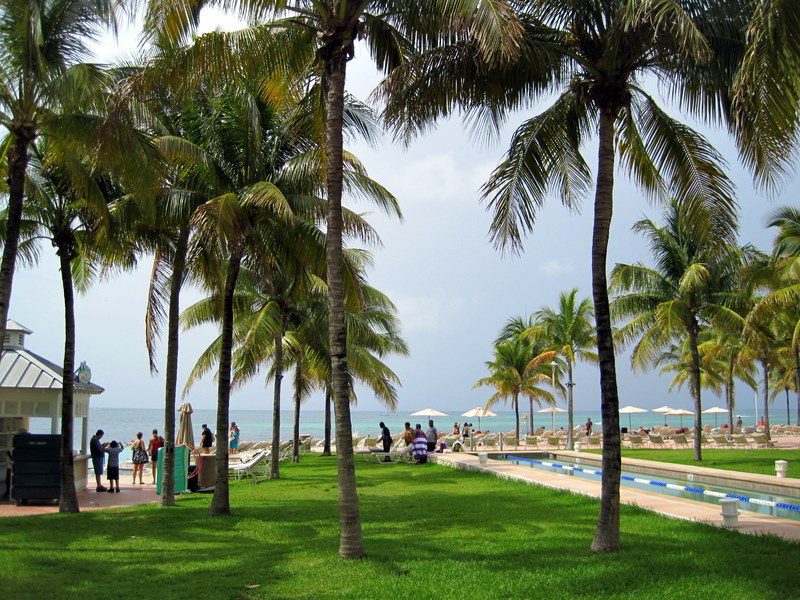 Our Lucaya Resort in the Bahamas on our cruise! Ahhh!!!

Cruises evoke a bevy of reactions from folks.

Are cruises “Heaven on Earth,” or an “Inferno of Inauthenticity and Waste?”

Are cruises a great, money-saving deal, or are they financially foolish?

Are they “delectably relaxing,” or “straight up… wimpy?”

All these voices swirled through my noggin when my beau, Colin, revealed he’d snagged a 3-day cruise, 4-day Florida jaunt package at a discount… and we were scheduled to leave the day after we both finished teaching Day 180 of the school year! Ok, to be accurate, the main voice in my head when I found out was: “YESSS!!!! AWESOME!!!!” But the question remained: how exactly would the three days on that mammoth boat be? 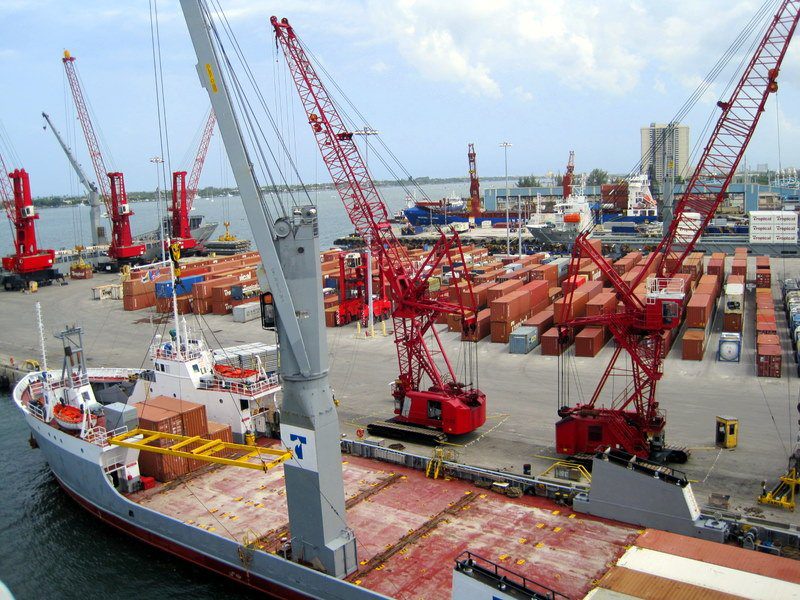 This boat (docked next to our cruise) was what we initially suspected our ride would look like. With our beds as boxes, of course.

Did Colin get the discount because we were, as my father feared, setting sail on a vessel titled something like “Ye Olde Rust Bucket?”

After we wound our way into the parking lot, after we were searched and scanned for contraband (guns and alcohol) and after we at last strode up the heavily air-conditioned ramp, we breathed a sigh of relief. This was a good-looking ship!

We scampered about, squealing, “Check this out!” Our cruise ship had eight towering floors, hundreds and hundreds of guests (it was fully sold out), multiple glass elevators, five restaurants, a two-floor dance and performance hall, and a giant casino. 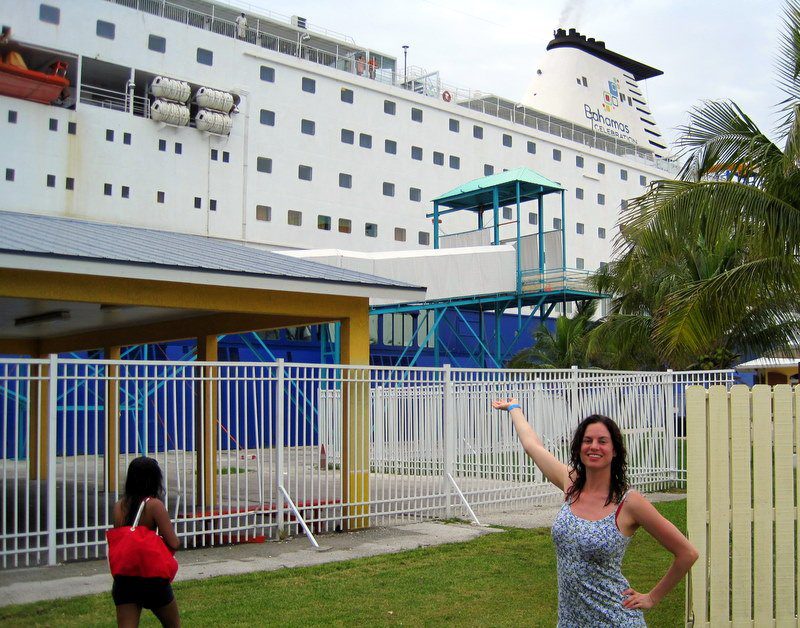 Me and our actual cruise boat, docked in Freeport, in the Bahams!

There was a lounge with a wall of windows overlooking the ocean, a teen dance club and a pre-teen dance club (with strict age maximums to keep out the creepy old lechers), a spa and fitness club, and two top-floor pools… both of which had a big slide for kids or child-like adults.

In a crazy twist, we later found out that the whole bottom section of the boat was filled with… cars and trucks being exported and imported! If you start thinking too long about how the heck all that metal and fatness stays afloat, your brain might go pop.

But here’s the bottom line: Though I would never recommend cruising as one’s exclusive form of travel, our cruise was totally, decidedly fantastic. It was a haze of food, smiles, friendly folks, food, non-stop entertainment, ease, naps, food, and relaxation. And, for the first time in years, I turned my phone and internet access TOTALLY OFF. Whoa! Living in the moment, baby! 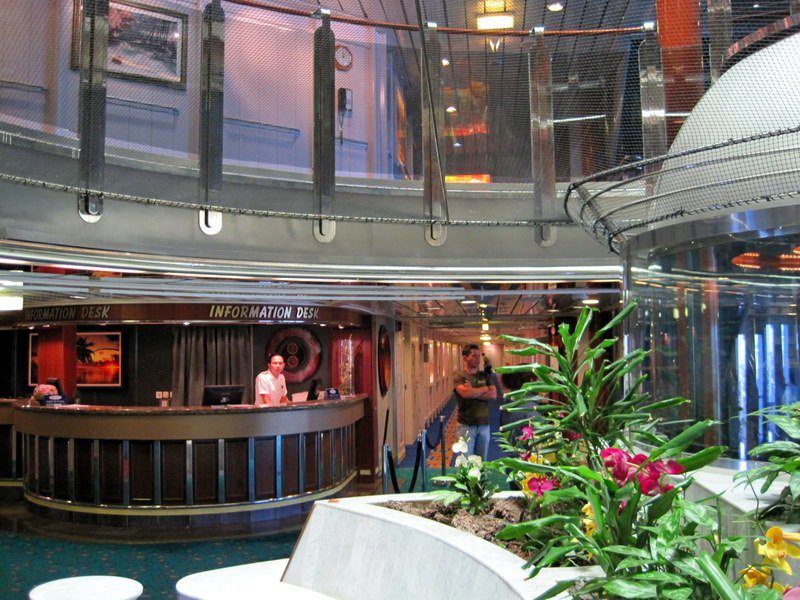 The lobby of our ship. You’d never know it was afloat!

After spending 180 days as a teacher corralling 150 students a day into reading, writing, and r-thinking, and after running two websites in every spare moment, how refreshing it felt on our cruise to have the hardest moment of the day be deciding which of the five restaurants to eat in! Burp. (There may or may not have been a night when we had not one but two dinners. And then a midnight snack at the late-night “Italian trattoria” on floor four.)

Another thing we adored about our three days at sea: the nice people! You would be astounded at the mix of humans aboard a discount cruise ship. Every meal, we would sit next to a different flock of folks, and every time we would hear surprising, inspirational, fascinating, and wonderful life stories from a new set of people. I went into the cruise a judgmental snark-er and emerged with a new love for humanity. 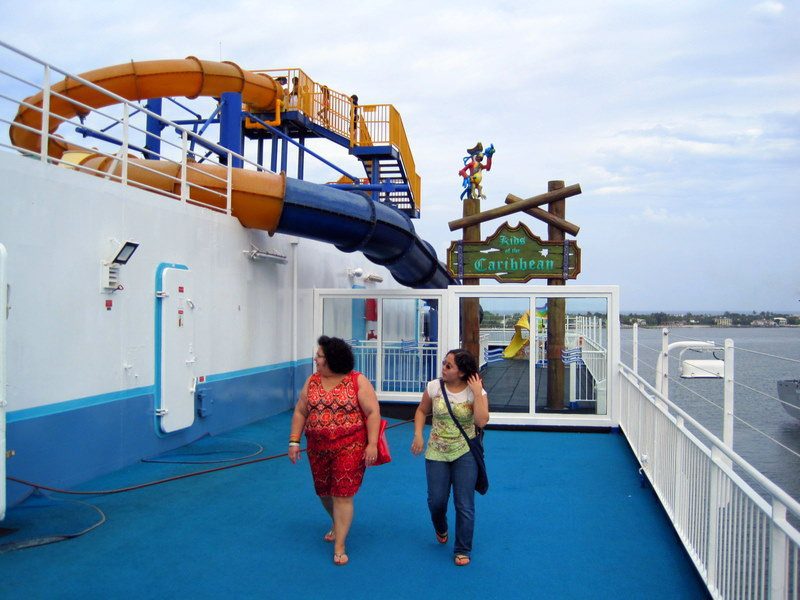 One of the pools (with slides!) on the top floor of the cruise!

And what about the entertainment? Ahh, yes. Every night, included in the cost of the cruise (thus essentially free), there were singers, comedians, magicians, dancers… all just steps from our cabins! No worries about catching the last train home or paying for a cab… going out at night on a cruise is easy-peasy.

And what about the food? It’s all included in the price of your cruise, of course. Colin and I had a humorous first half hour of the cruise where we morosely watched hundreds of people at the top-floor pool eating a buffet lunch, wishing we could have some, but not wanting to spend the money… when a large man laughingly boomed: “What’re you just standing around for? Get in line! This food is free, ’cause you already paid for it, so dig in!” And we joyfully did. 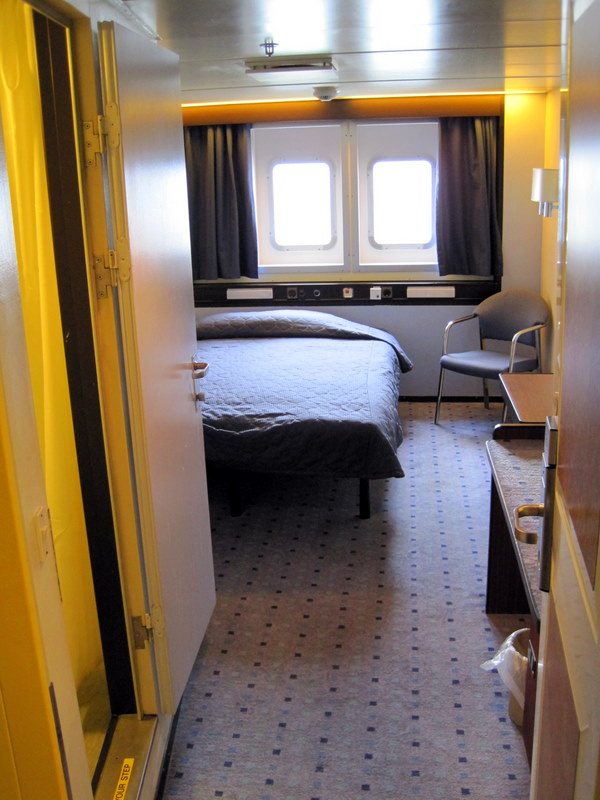 A higher-priced cruise cabin (with windows!)

But what about hidden charges? Overall, discount cruises are a sweet deal (transport, food, lodging, and entertainment, all in one!), but there are several costs you should keep in mind. First, every day there is a “service charge” and “fuel surcharge” you are responsible for paying at the end.

Further, there is an extra fee for a whole host of tantalizing temptations, including: shore excursions once at the Bahamas (as we called it, the “getting off the boat fee,” which was actually worth it, given how pretty the beach was), alcoholic beverages, cheesecakes at the “Italian Trattoria,” spa treatments, gambling at the casino, taking home any photos snapped of you by the ever-lurking professional photographer, and so on. So, IF you’re good at resisting temptation, cruising can be an excellently economical way to travel.

Further, it became clear pretty quickly that everyone on the boat had paid a vastly different price for the same experience. Colin, for example, had talked down the price about $300 from the initial rate the agent gave him on the phone. A woman at one of our dinners revealed she’d paid even less, due to her own tricks. Others we met had paid far more. And the end result was a sold-out cruise and lots of happy people with varying wallet weights. So it goes. 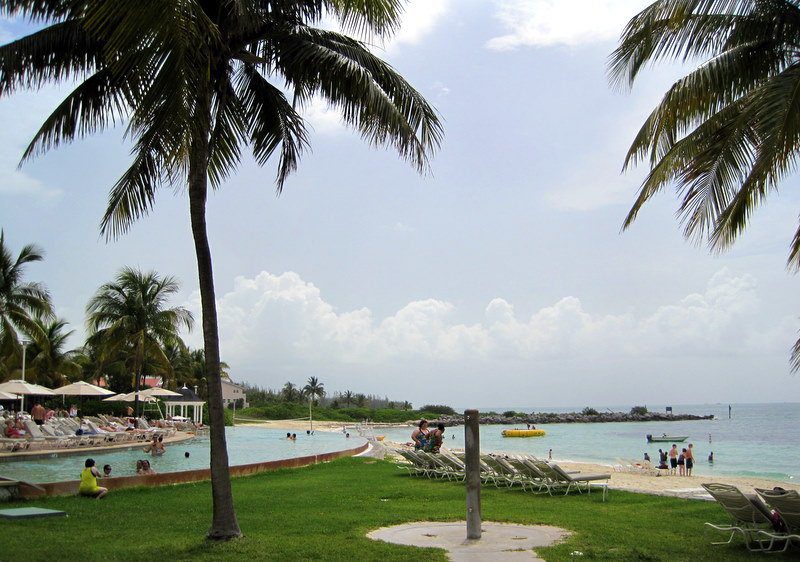 One of 7 infinity pools by the azure sea at Our Lucaya resort. Yum!

But let’s get to the jewel of the three days: the Bahamas! We docked in Freeport in an industrial tangle of docks, and hopped aboard the shuttle bus (included in our “getting off the boat fee”) which gave us a short tour of the island, Grand Bahama. It was fascinating! We saw the devastating damage still evident from the 2004 hurricane, we saw the influence of British rule and immigration, and we saw the bright blue castle mansion of the owner of the most fast food restaurants on the island.

And then we arrived in “Our Lucaya” Resort in Lucaya, displayed in the first and last photos of this article. WOW. Listen: I pride myself on being something of a rough-and-tumble travel blogger who travels on a shoestring and goes for the more tattered, cheaper things in life, BUT when faced with those seven sky-colored infinity pools at Our Lucaya Resort overlooking the perfectly warm azure sea… well, paddling around in those was worth losing some of my rough-and-tumble cred. :)

Colin and I returned to dry land with faces glowing from sleep, sun, food, and good times, and with relaxation achieved. Thanks, cruise!

So, readers, now I’m aching to know: what are YOUR cruising experiences and opinions? Do tell!

You are so lucky! My mom has been planning to go on a cruise with the family to the Bahamas, but she still hasn't got everything planned out yet and also the money budget too. It seems incredibly amazing and hopefully I will also be able to go on this cruise, too.

Well in my opinion, I think that it is a treat to have been on a cruise for three whole day. I would have enjoyed that ride myself as well.

When my aunt went to the Caribbean, she got me a super-large sunhat decorated with exotic flowers, but she left it at her hotel room! :'( I was upset'cause she took a picture of it and sent it to me. It was so colorful and perfect for a gray, non-sunny, cold, snowy New England winter. :( I went to Florida once and we went to Orlando to go have fun at the theme parks! :D

Ms.Marshall, I think I like to stay inland of Florida better. That is because I am not a good swimmer and I would be scared to see sharks. One year you should go to Sea world in Florida. I was wondering if you have ever been to Alaska.

I haven't, but friends of mine who've been say Alaska is amazing!

We went on our first cruise last month and weren't sure how we'd like it - our usual travel style is far more budget conscious and we rarely splurge on anything. In the end, we were pleasantly surprised & really enjoyed being pampered for a week - good food, a gym, the swimming pools, sauna and steam rooms, even a cinema and an ice rink on board! We cruised around the Mediterranean and hit ports in Spain, Italy and France. We wouldn't have been able to travel to all these places for the same price of the cruise, which included transport, food and accommodation! We found the excursions they offered terribly overpriced, but we were able to get to all the cities & places we wanted to visit without taking the expensive shuttles / tours of the cruise line. There are so many fantastic deals on cruises out there - it probably won't have been our last cruise! :)