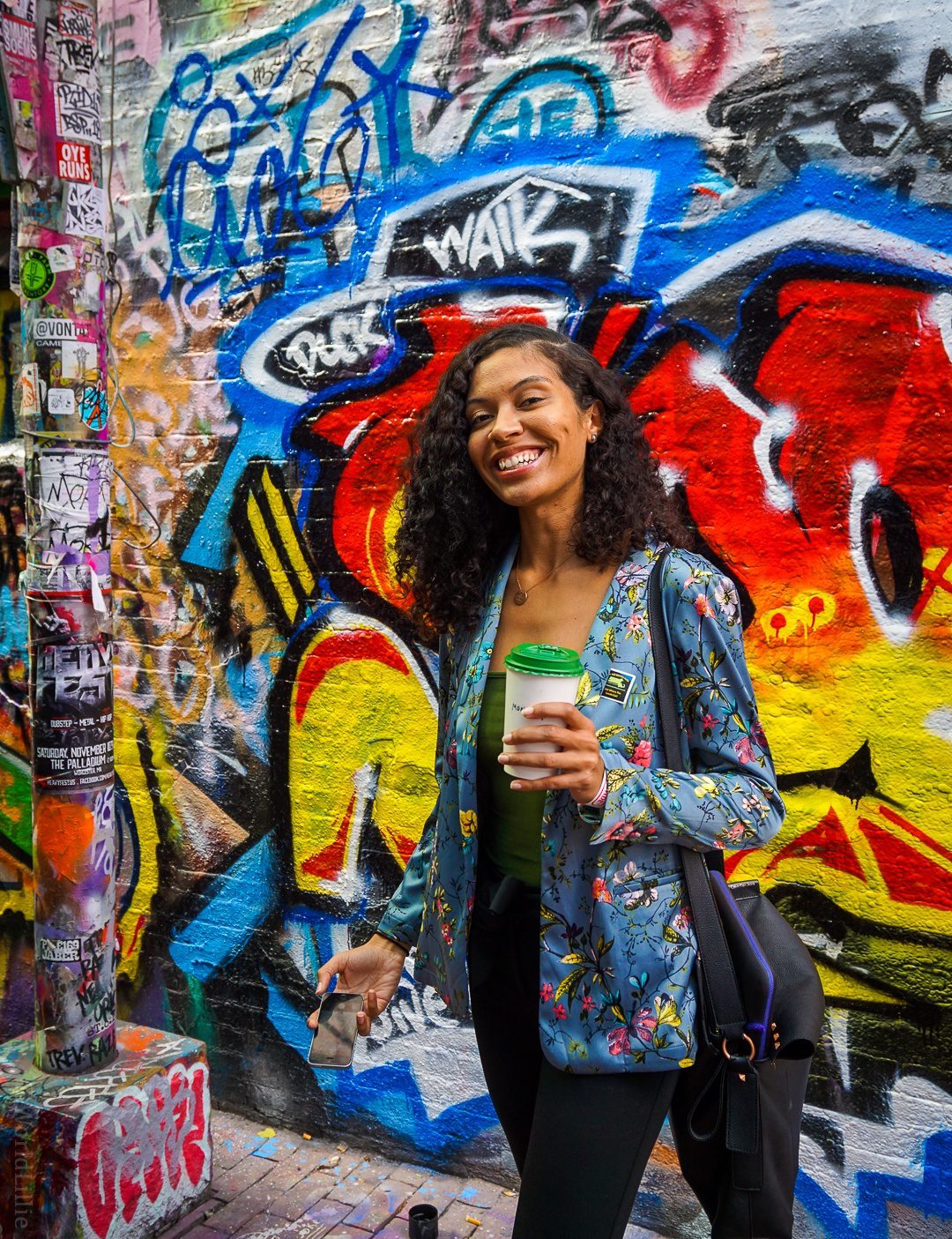 Like food, mural arts, and Central Square in Cambridge, MA? Read on!

When a local Boston tour company invited me to check out their new food and mural arts tour of Central Square in Cambridge, MA, I agreed on the following condition: my current intern teacher, in addition to a certain former student, would need to attend, too.

Why? Harmonie and Steph are delightful to hang out with, but they’re also the most fun models in Boston for my camera to snap. 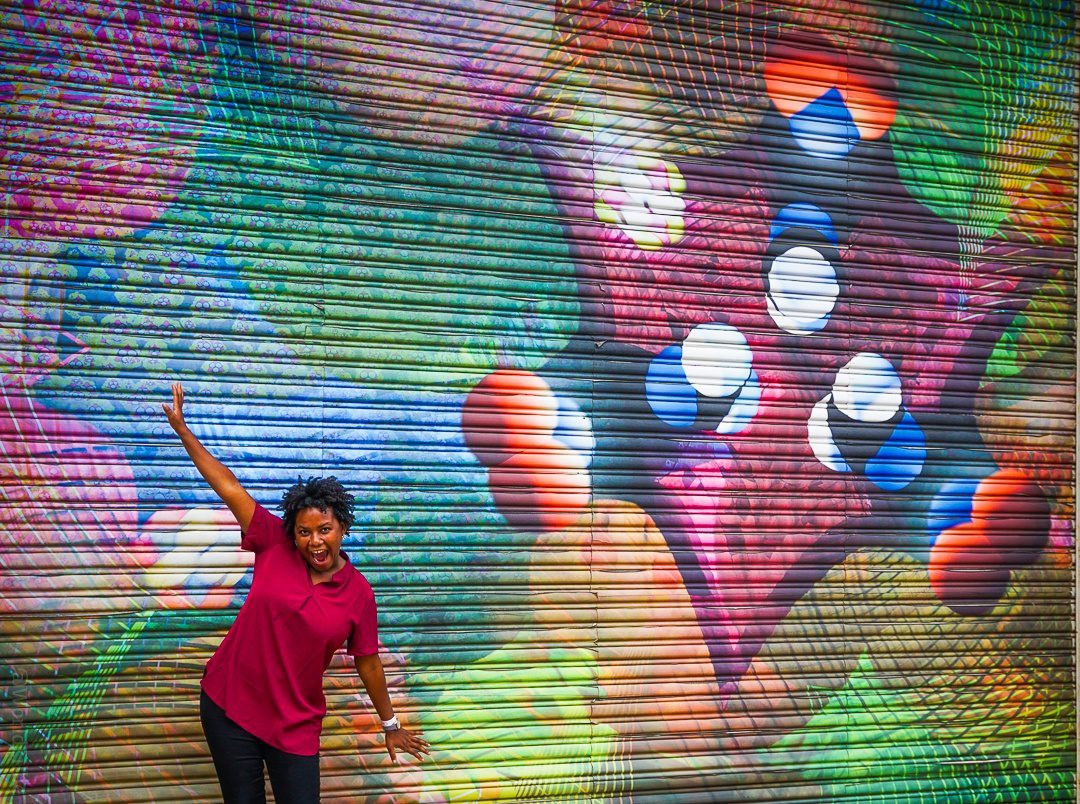 So what is this tour that we went on? The company is called Off the Beaten Path Food Tours, and it was founded in 2017 by Lizzie and Sam, a local couple who wanted to showcase scrumptious places to eat that are unique to Boston.

Their interactive tours feature different neighborhoods, and are enjoyable for tourists and locals alike. We were lucky enough to be on the first ever food and mural arts tour of Cambridge’s Central Square! 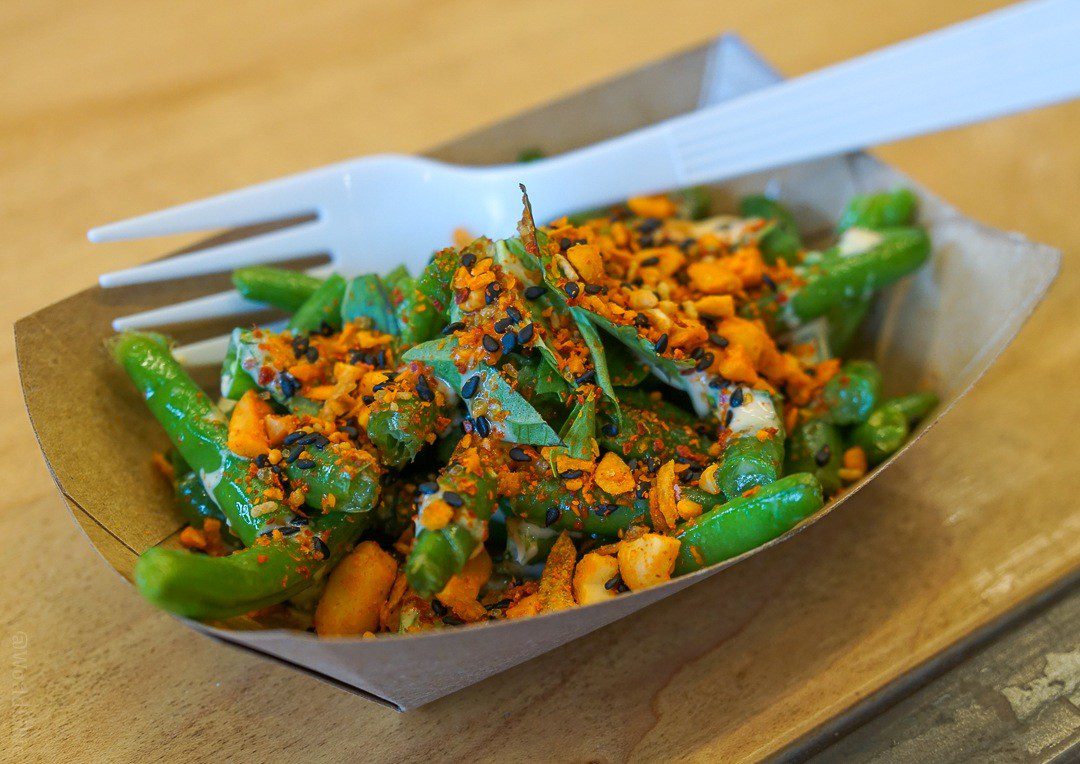 Our first stop, pictured above, was Whole Heart Provisions, where we crunched on flavorful green beans with peanuts. Don’t worry — they ask us when you sign up for the tour if you have any allergies, and can accommodate most food needs!

With some food under our belts (literally), it was time to start with the art. We headed into the first of the famed murals of Central Square: this vintage-style rainbow marquee by artist Kenji Nakayama on what used to be an old Blockbuster Video store! 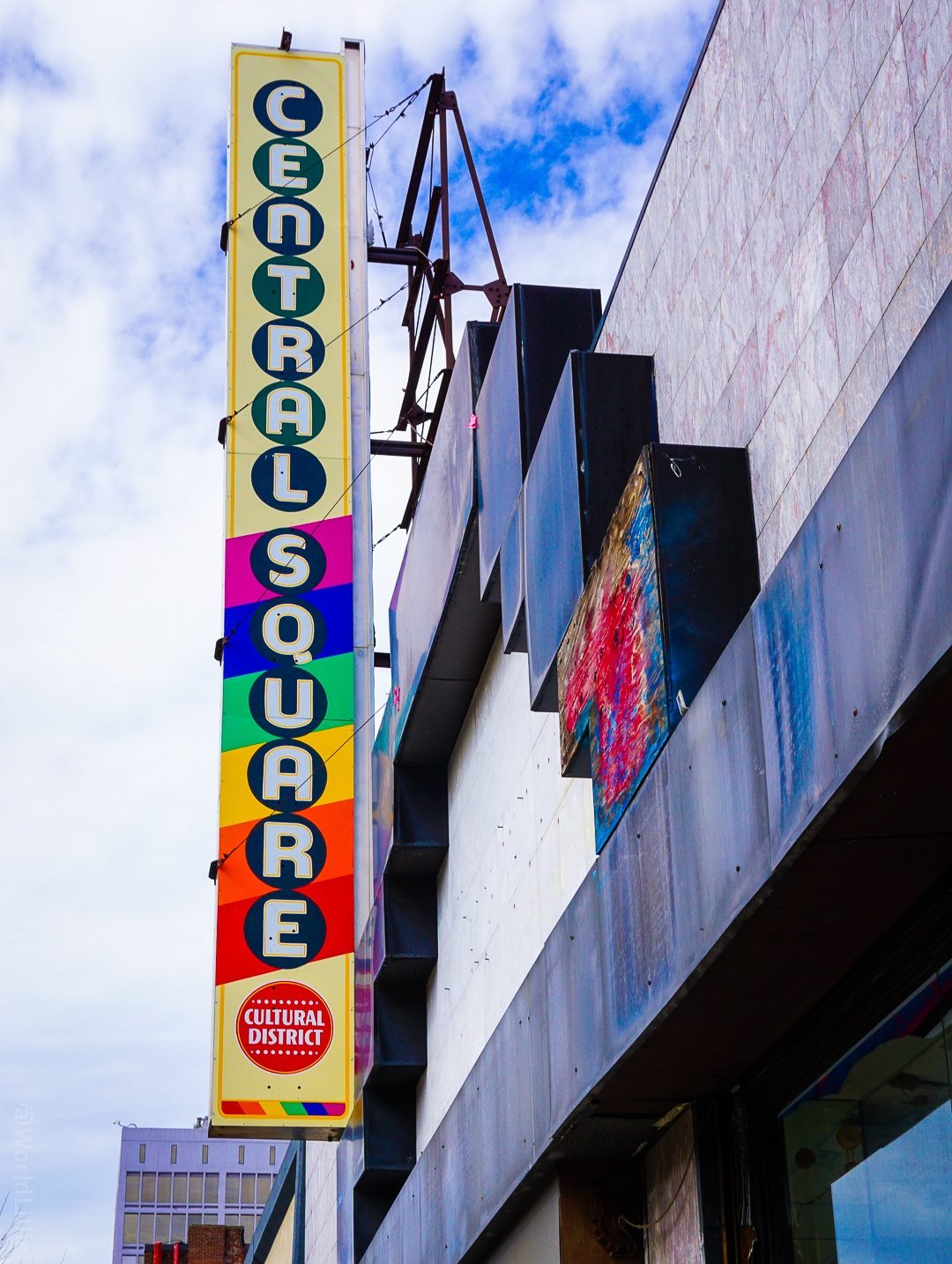 Our tour guide, Sai, has gained deep knowledge of the neighborhood from his years working for the Central Square Business Association — plus jamming out in a rock band at local venues by night! 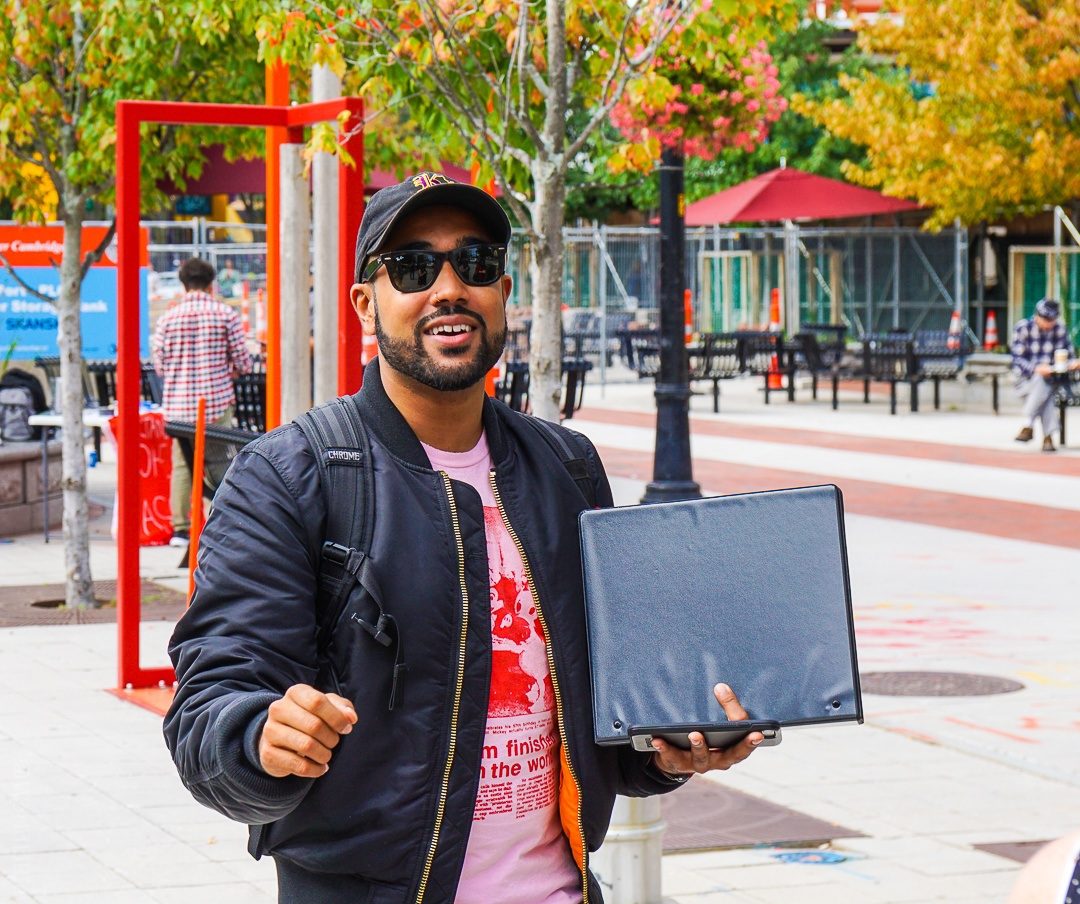 On to more food! Our tour trotted along into Abide: the daytime incarnation of the hoppin’ Middlesex dance club. Abide specializes in crafted tea and juice concoctions, such as the Green Gables: pineapple, milk, and jasmine green tea. 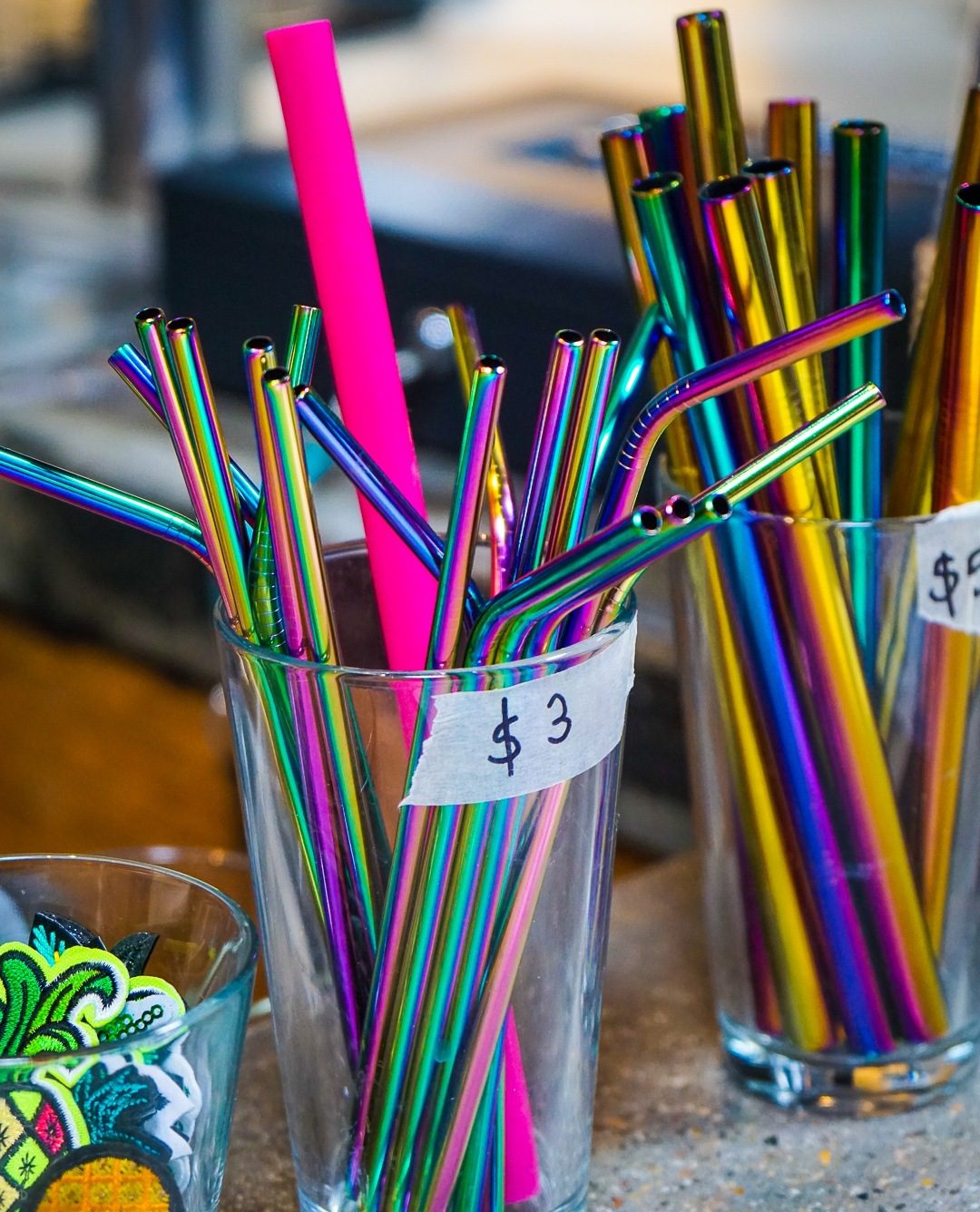 I indulged in the Ice Cold, made of homemade lemon extract, matcha, and soda. It was a fizzy, zesty cold tea… and the boba tapioca “bubbles” made it pop!

(Yes, that shirt below is from my friend’s fashion company that I can’t get enough of.) 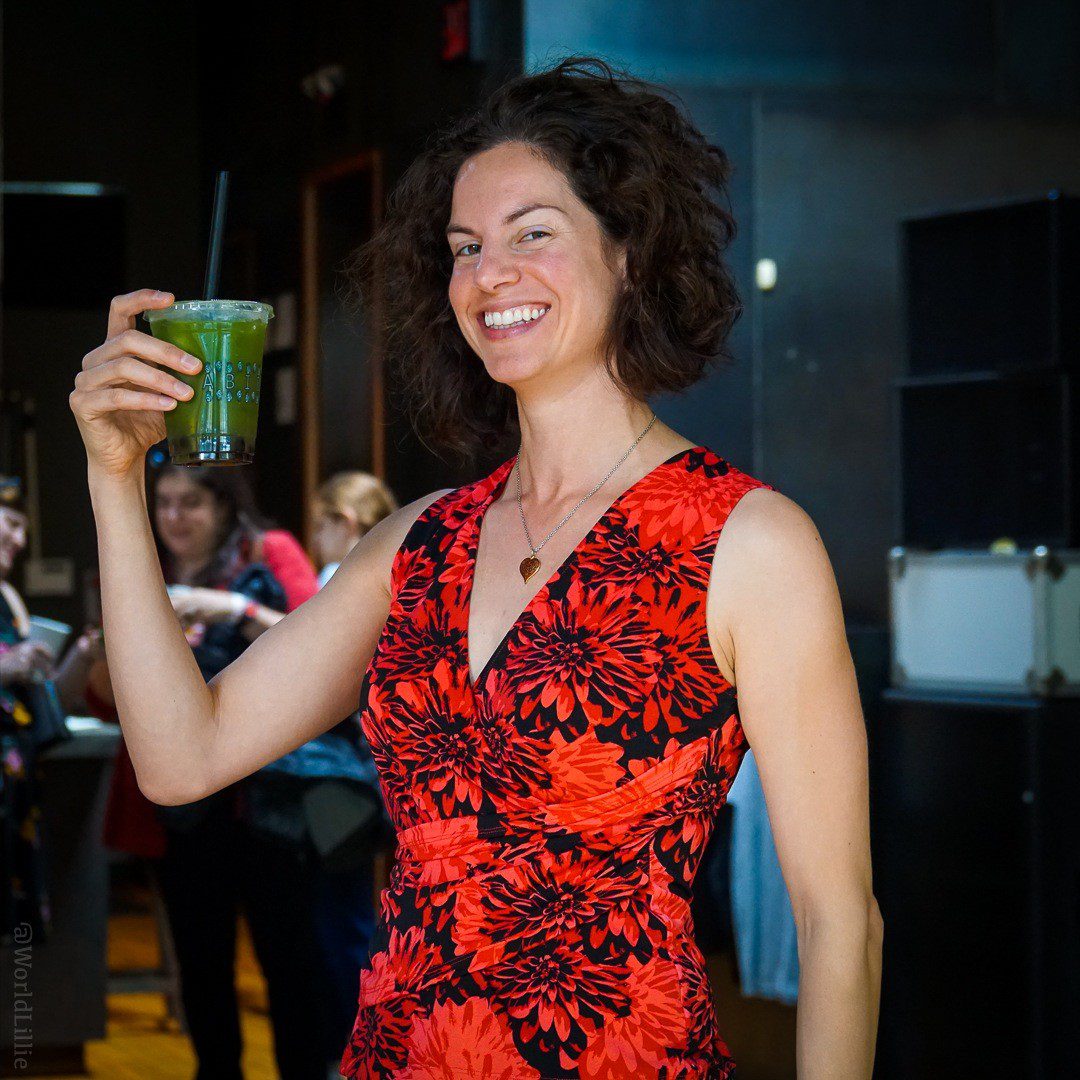 Me with my fancy sparkling iced matcha with boba!

One of the funniest parts of being on a tour with other “influencers” is taking photos of people taking photos. So “meta”. I love this one of Steph photographing her fancy juice tea… 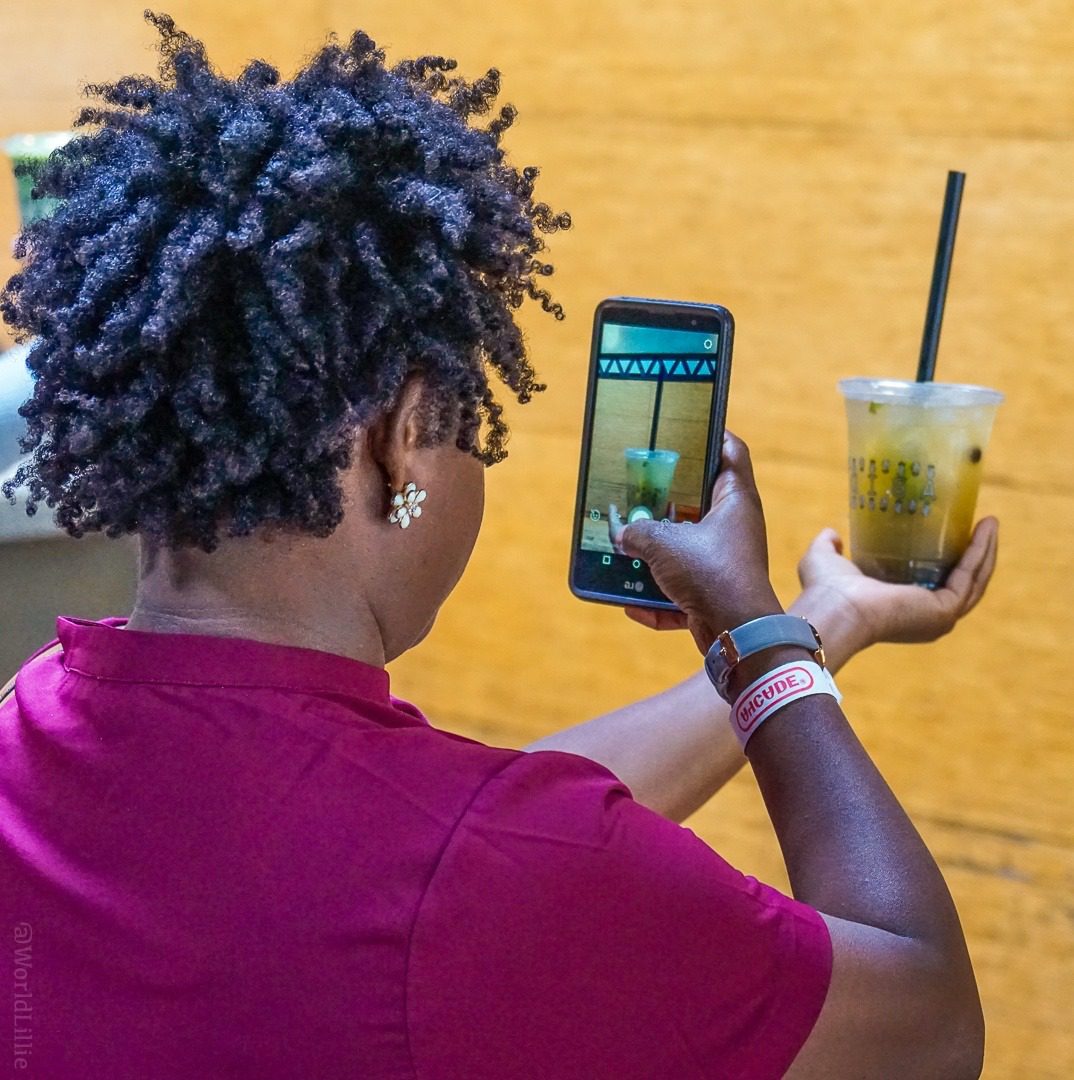 Ok, I can hold back no longer: Let’s get to the part of the tour where we sprayed our way around Graffiti Alley, a.k.a. the best place to take photos in all of Cambridge! 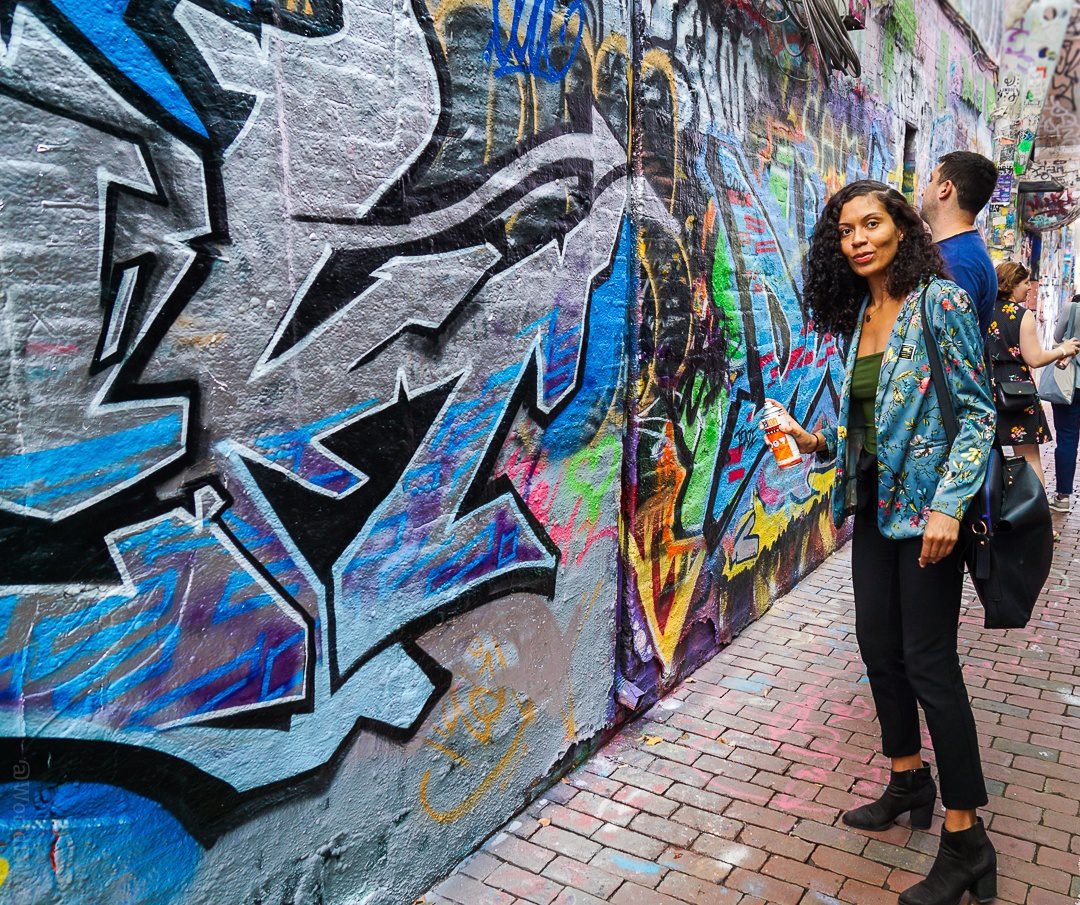 Harmonie getting ready to paint in Graffiti Alley.

Having spent most of my life in the Boston area, I’ve walked by Graffiti Alley a million times (and squealed with delight each time!). That said, I never knew the history of the art installation until the tour. 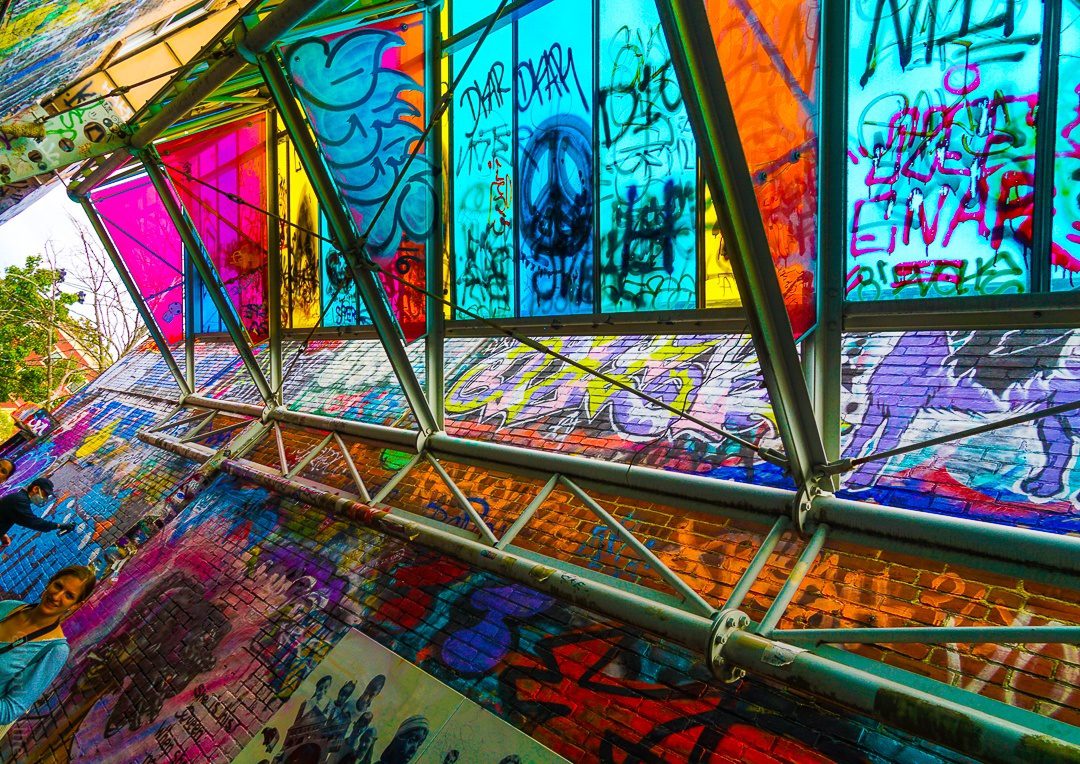 The roof of Graffiti Alley is as awesome as the walls.

It turns out that the alley’s art was commissioned in 2010 by the owner of Central Kitchen restaurant, which forms one of the walls. However, it soon took on a life of its own, and is one of the few places in the country where it is totally legal (and encouraged) for anyone to paint over! 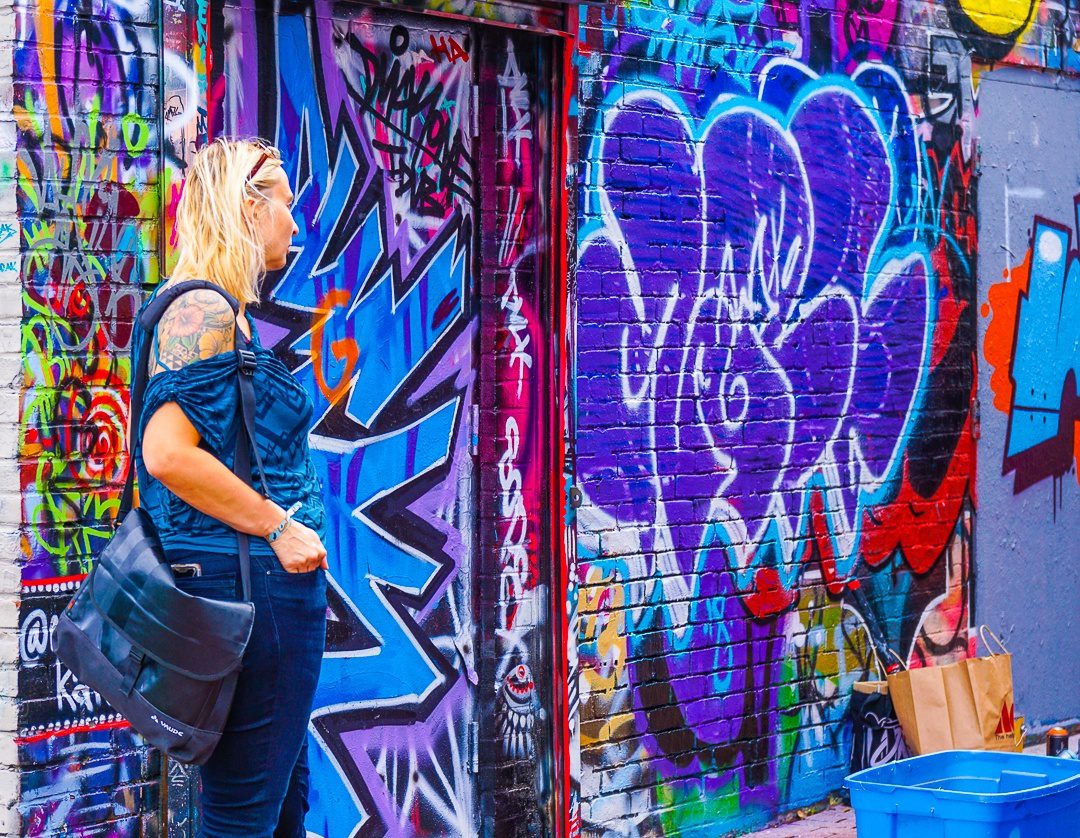 The woman has artwork on her arm like the walls.

What this means is that Graffiti Alley is different EVERY DAY. On the Saturday that we visited, there were no fewer than six artists busy at work on new creations, adding new layers on top of almost a decade of daily paintings by others. 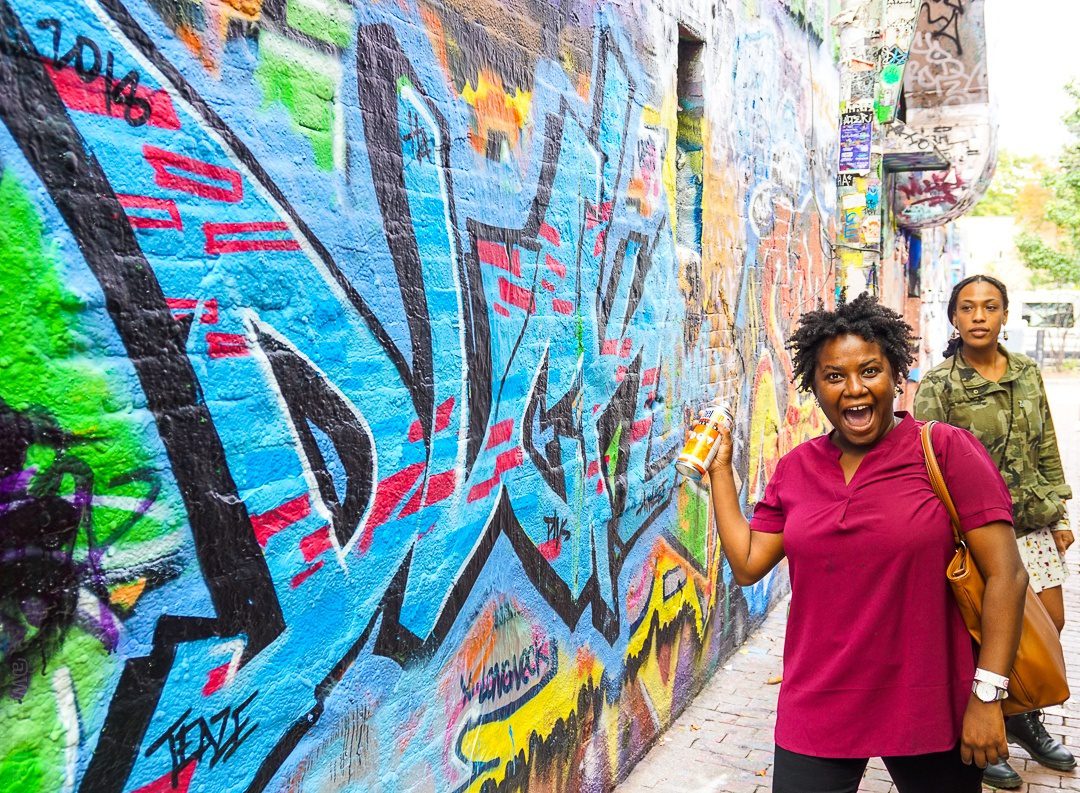 Steph getting ready to paint.

In a stroke of tour genius, Sai handed us cans of spray paint and told us to get on into the alley and go for it! He explained the biggest rule that governs the alley: If a piece of art on a wall is truly awesome, try not to mess it up.

I think you will agree that Steph’s heart, below, should NEVER BE PAINTED OVER BECAUSE IT IS SO PERFECT. 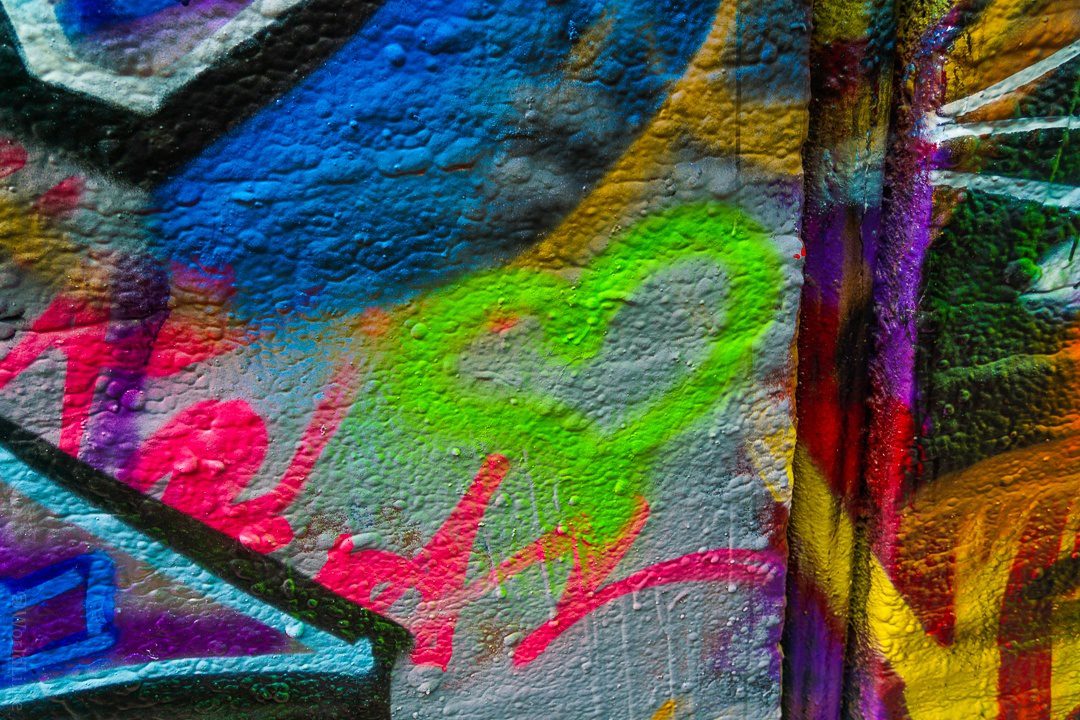 Harmonie sprayed a peace sign below the heart, and I feel compelled to clarify for any students reading this that 100% of the graffiti conducted by your teachers on that day was fully legal.

We are good and pure educators — and as educators, we appreciate the joy of hands-on learning! Meanwhile, isn’t it astounding how Harmonie’s blue jacket matches the graffiti? 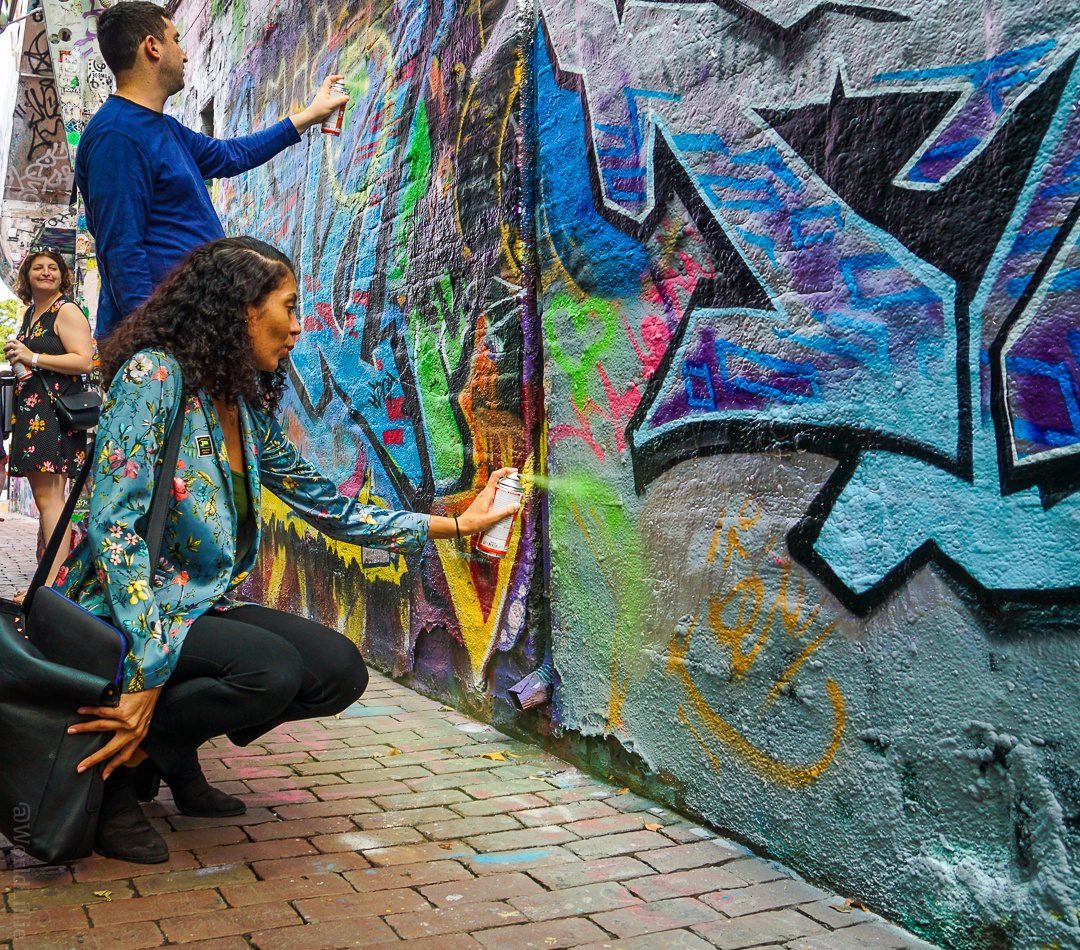 Speaking of hands-on learning: The tour took another surprising twist when they handed us a chunk of golden tokens, lured us to the back of Roxy’s Grilled Cheese, then hurled open a door to reveal a hidden ARCADE! 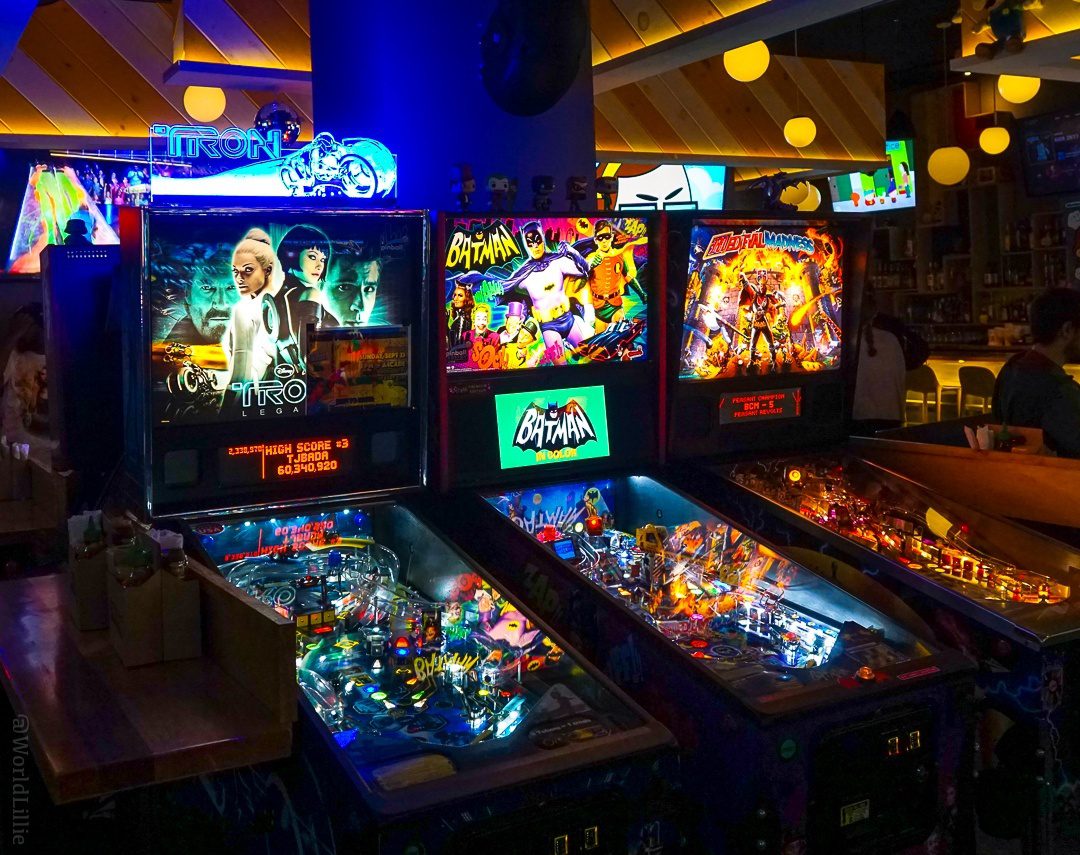 I twirled like a giddy schoolgirl upon spotting the Skee-Ball: a game that featured prominently in my middle school years. Roxy’s hidden arcade caters expertly to nostalgia like that. Check out this wall of theirs and try not to get the Mario theme song stuck in your head… 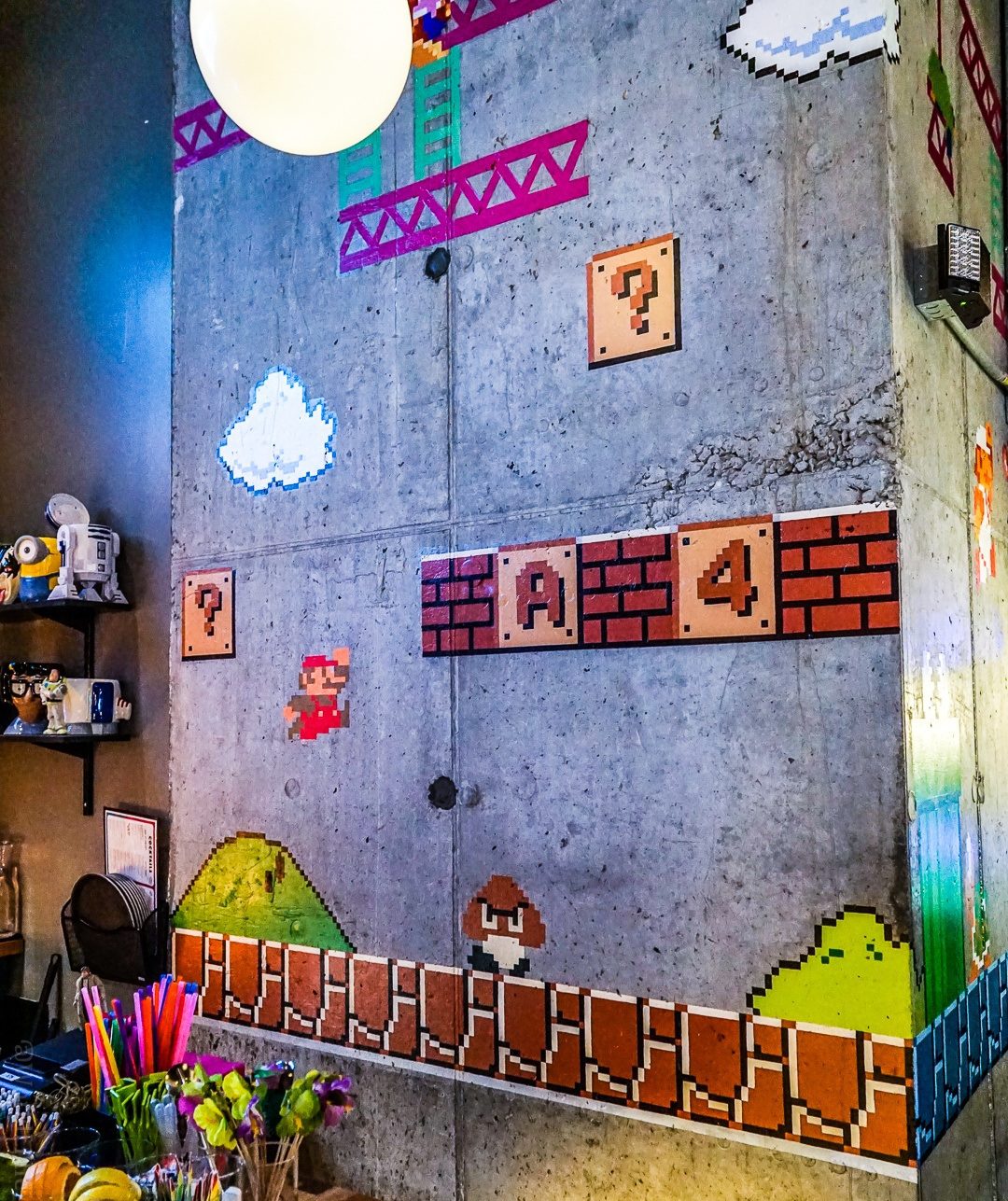 At Roxy’s Grilled Cheese we ate, er… grilled cheese of course, but it was too dark to photograph, so simply imagine the three cheeses dripping over your tongue.

Here’s a food photo you can see, though. The second to last stop for food was Mainely Burgers, and in Steph’s words, “The Brussels sprouts were the surprise winner!” Gaze at the juicy goodness of those succulent green orbs… 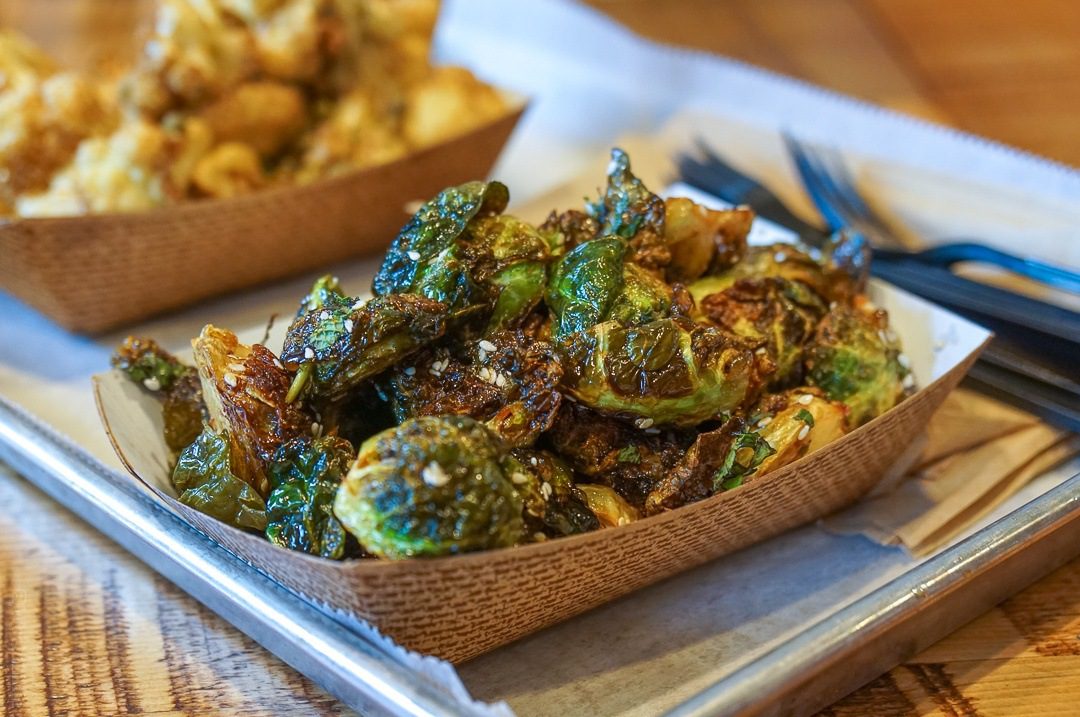 Once back outside, Sai explained that Central Square has launched a phenomenal mural project which will produce 10 giant paintings on the blank canvasses of prominent neighborhood walls, thus transforming the square into a pulsing rainbow. 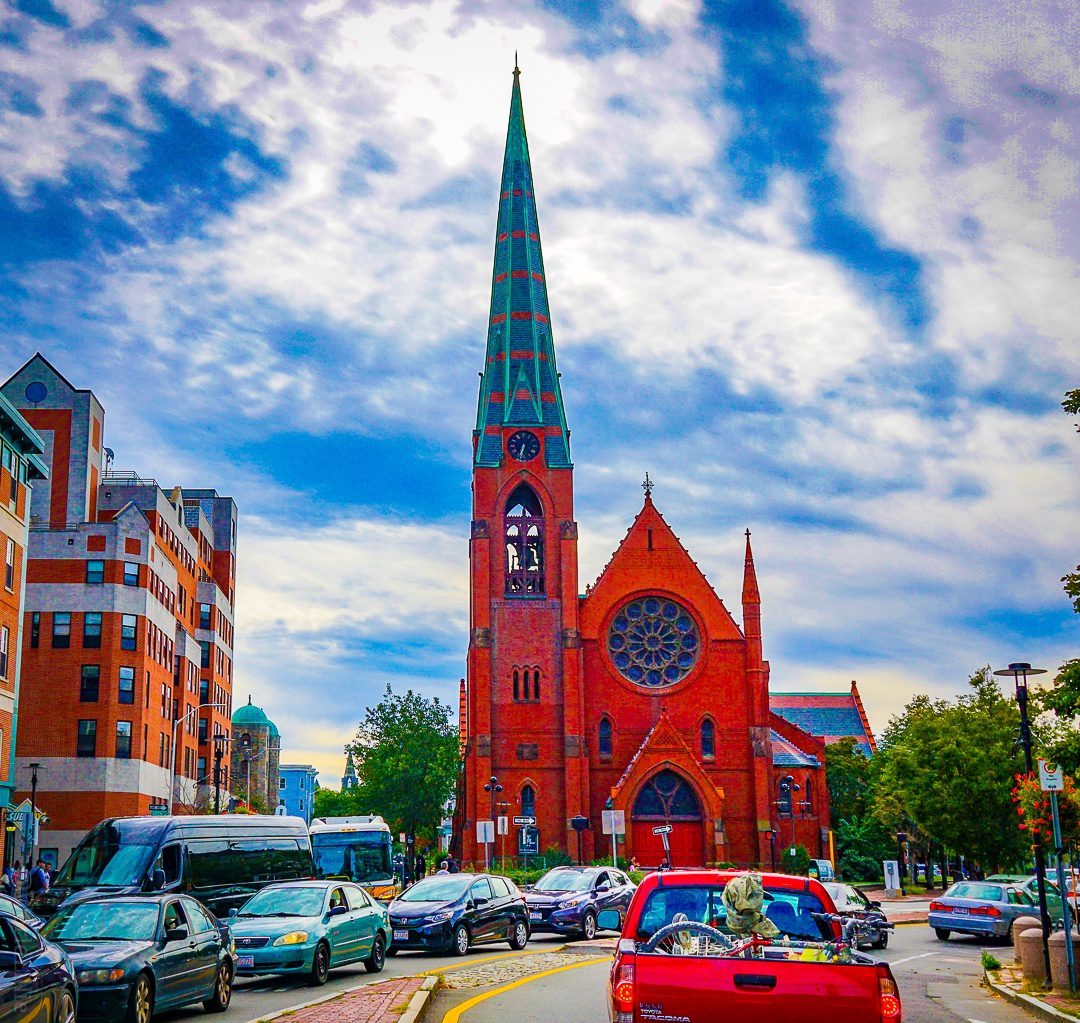 The iconic church at the heart of Central Square.

At the time of our tour (September of 2018), the murals were just getting started, but it was fascinating to hear about the process, and I look forward to returning to photograph the finished works of art. This gem below, found behind Graffiti Alley, has been around for years, but is always inspiring… 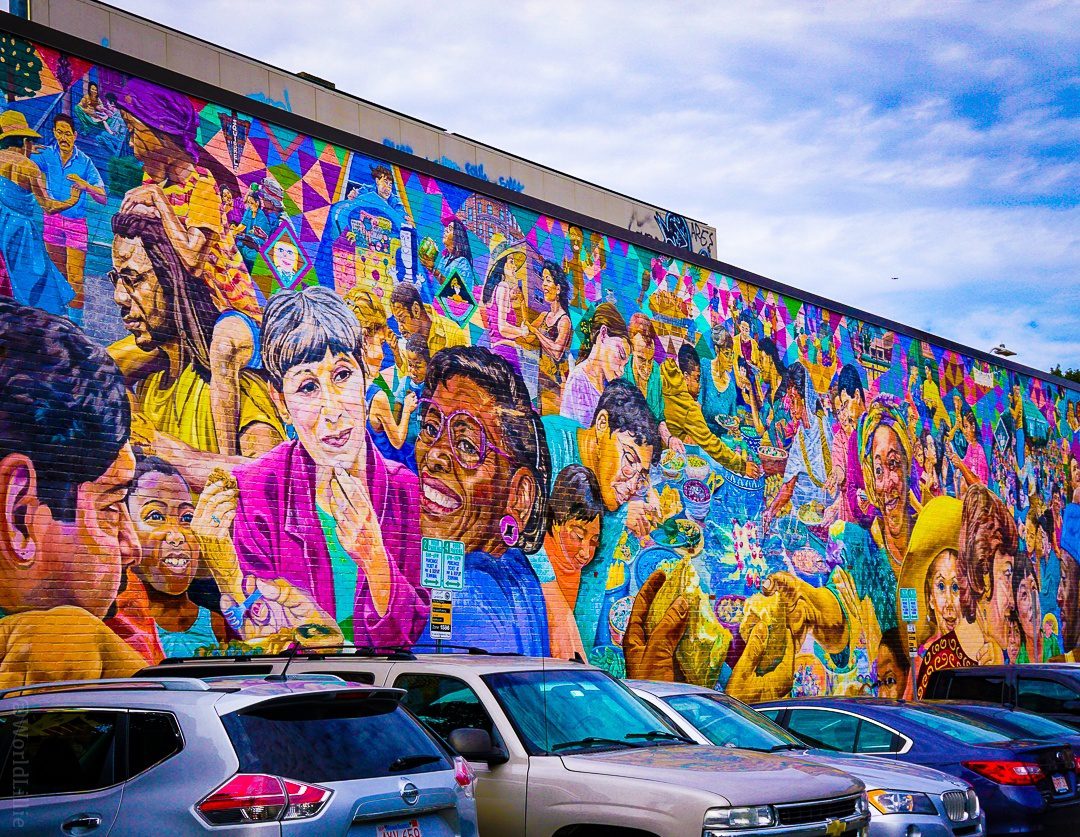 As a teacher, one of my favorite aspects of Central Square’s mural project is that local students are being involved in painting the lightboxes all around the neighborhood. These “little things” make such a difference.

I’m reminded of how the public art of Fishtown, Philadelphia made me grin from ear to ear, and totally brightens the feel of the whole neighborhood. I’m also reminded of what an impact it can have on a young person to be involved in a piece of art for an authentic audience. What a great project, Central Square! (See more drawing inspiration at this round-up post.) 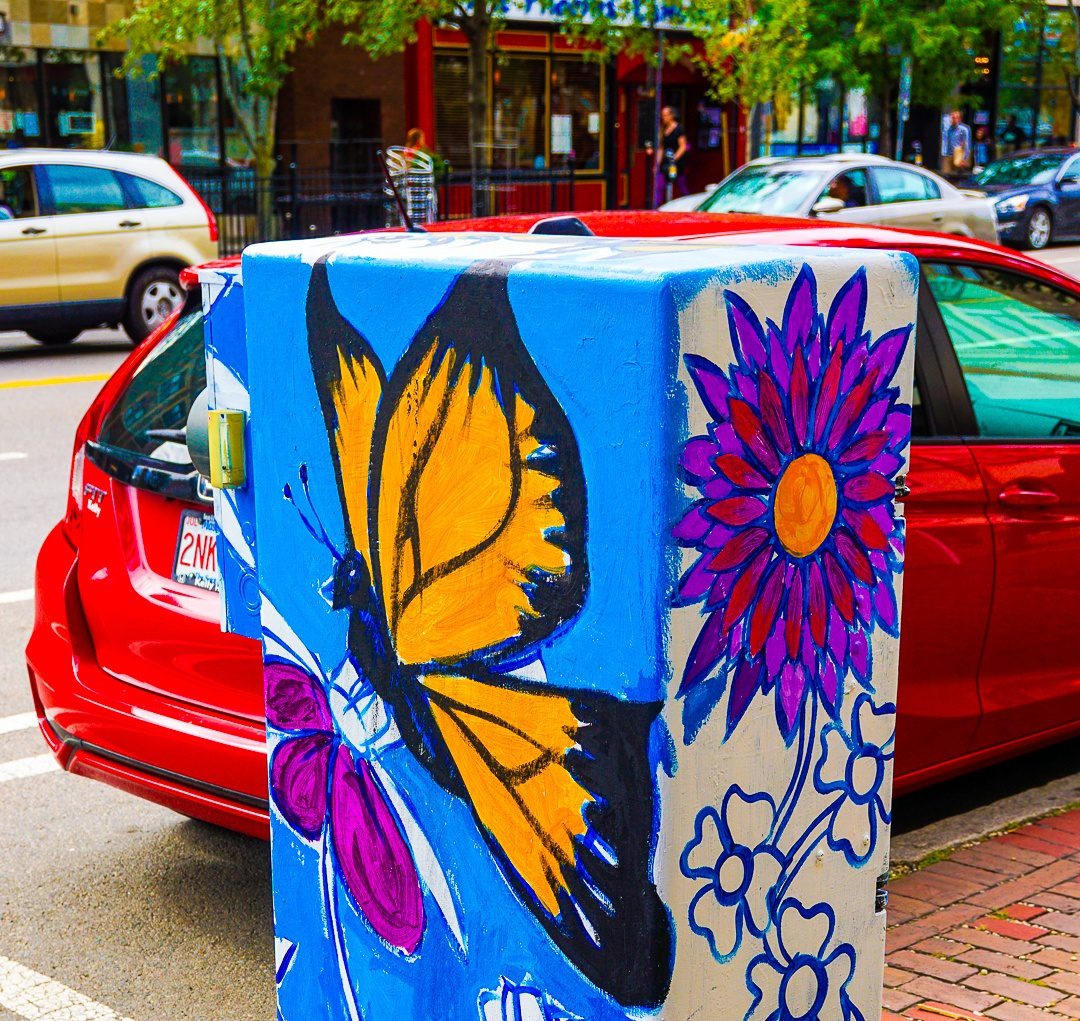 Lightboxes in the process of being painted by Cambridge students.

Sai revealed that after 5-10 years, older murals need to either be refreshed with new paint, or covered over by new ones.

In the photo below, it looks like a girl in the painting is reaching out for a hug after she heard him say that the mural she’s in is going to be painted over by another piece of art soon! 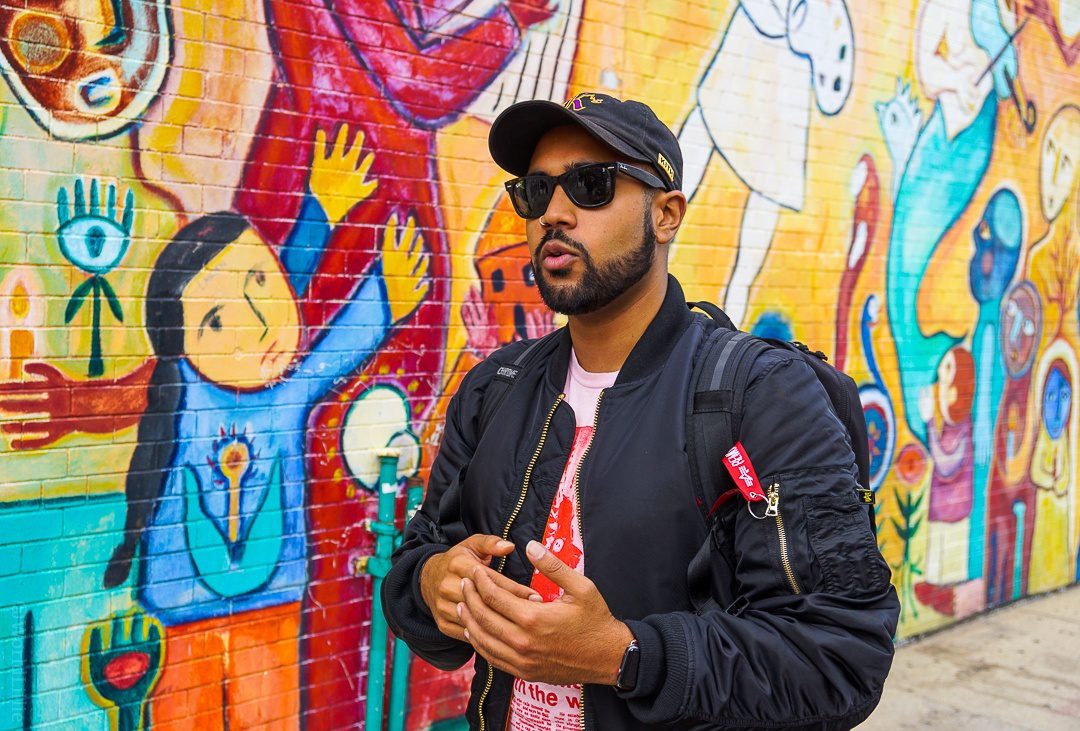 It looks like the mural is talking to Sai.

There was much I appreciated about this tour. I loved that Sai had us all introduce ourselves right off the bat so we became a community, versus awkward strangers. I appreciated our guide’s deep knowledge and palpable passion for the neighborhood.

Finally, of course I appreciated the food — both for my tummy and art for my eyes — by I was particularly delighted by the hands-on touches like the tokens and spray paint. That level of interactivity is rarely seen on group tours, but is so essential for immersion. 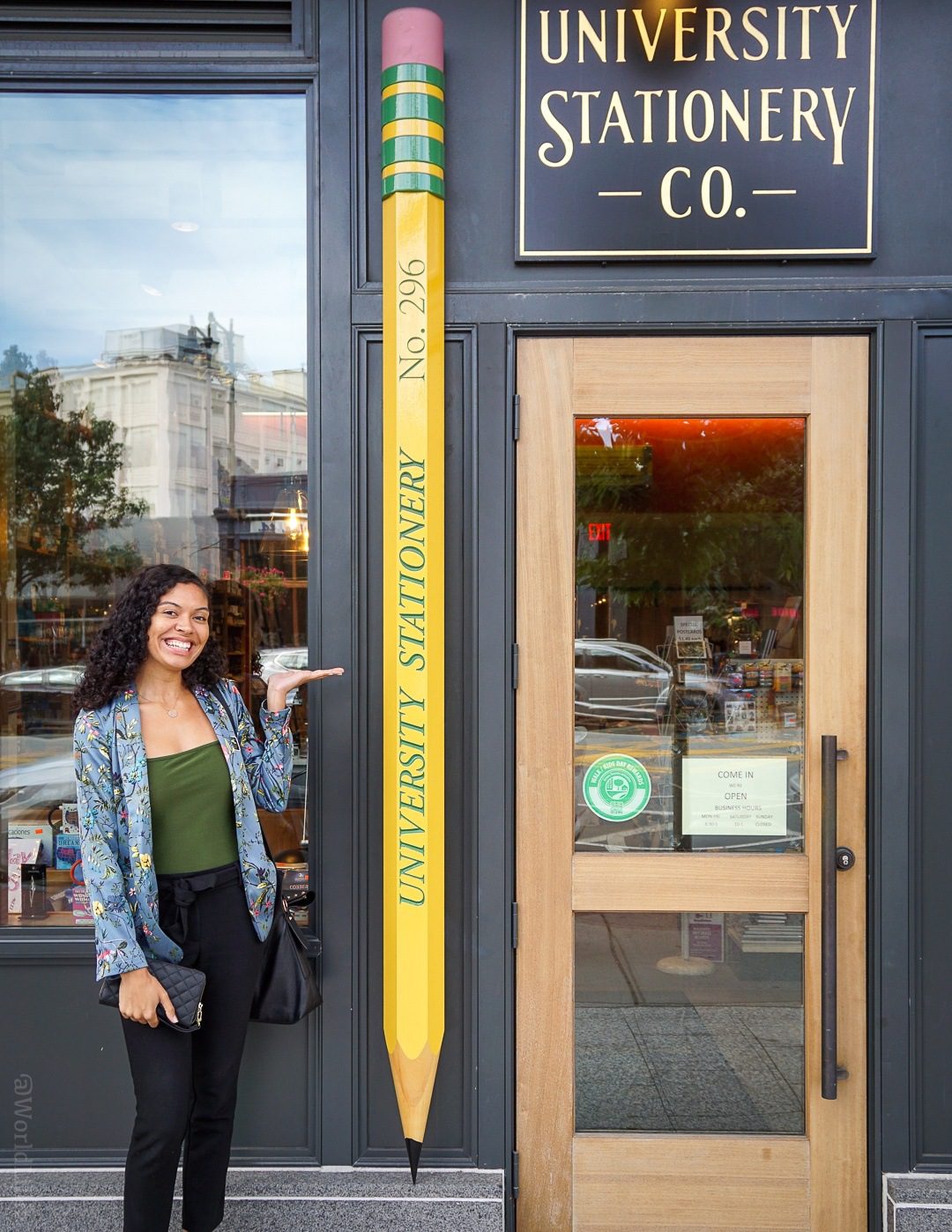 Harmonie pointed out this was a “must-take” photo for us English teachers.

We ended our tour at the Middle East: the storied music venue and restaurant where Sai used to work. The owner greeted us warmly and offered us a heaping platter of Lebanese food — including baklava.

I giggled at the list of upcoming bands hanging on the wall: “Captured! By Robots.” “Cattle Decapitation.” “Nervous Eaters.” “Rum Ham.” Then I stepped outside, and something stunning happened. 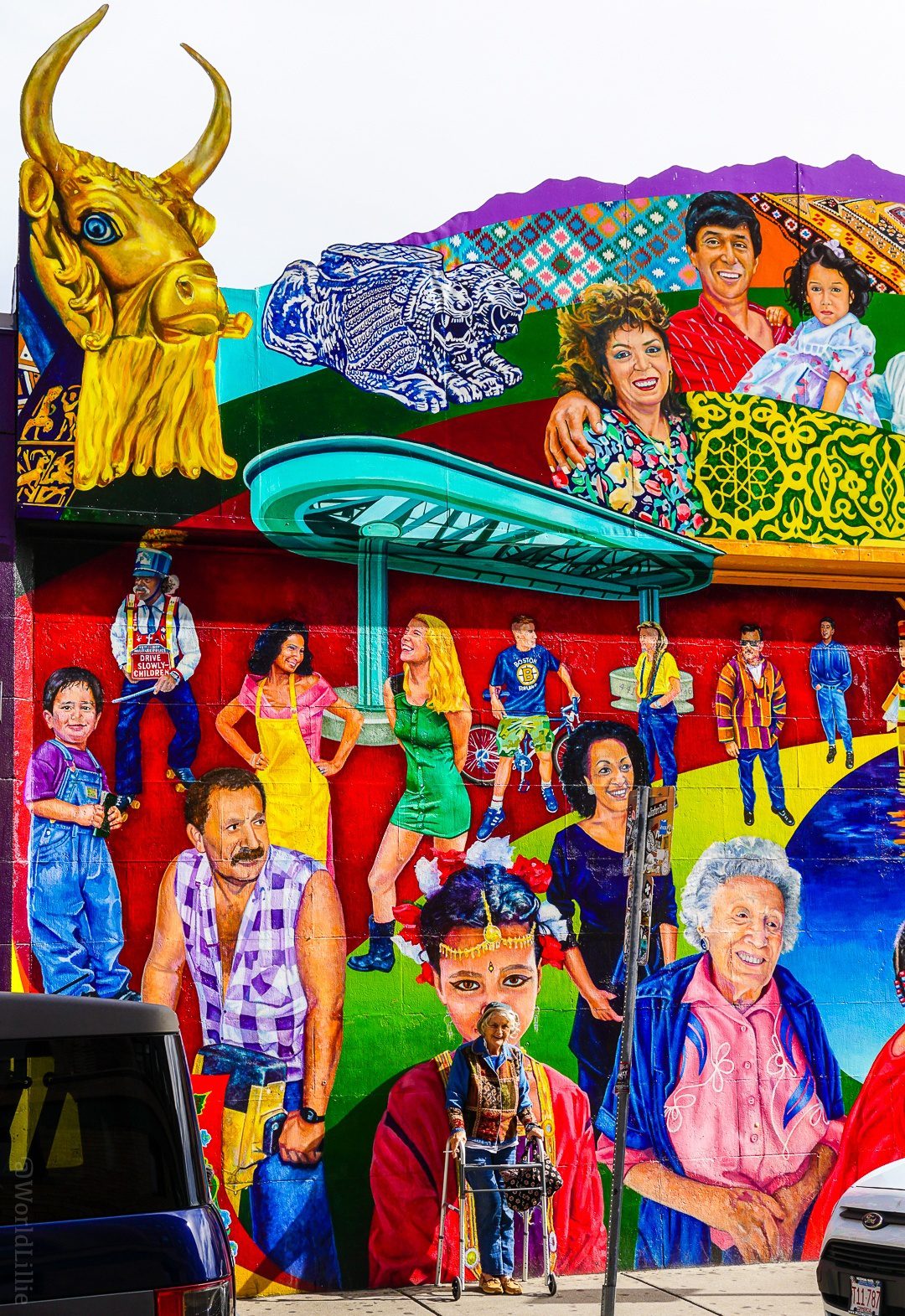 The scene for the moment: A real-life woman blending in with the mural behind her…

The 1992 mural outside the Middle East is one of the most beloved in Central Square, and was just refreshed with new paint from its creator, Daniel Galvez. Like much of the neighborhood’s art, it celebrates the multicultural, intergenerational diversity of the square.

As I crossed the street to snap a photo, I did a double take. Standing front and center in front of the mural was a graceful older woman who looked like she had stepped directly out of the painting. But wait — there’s more. 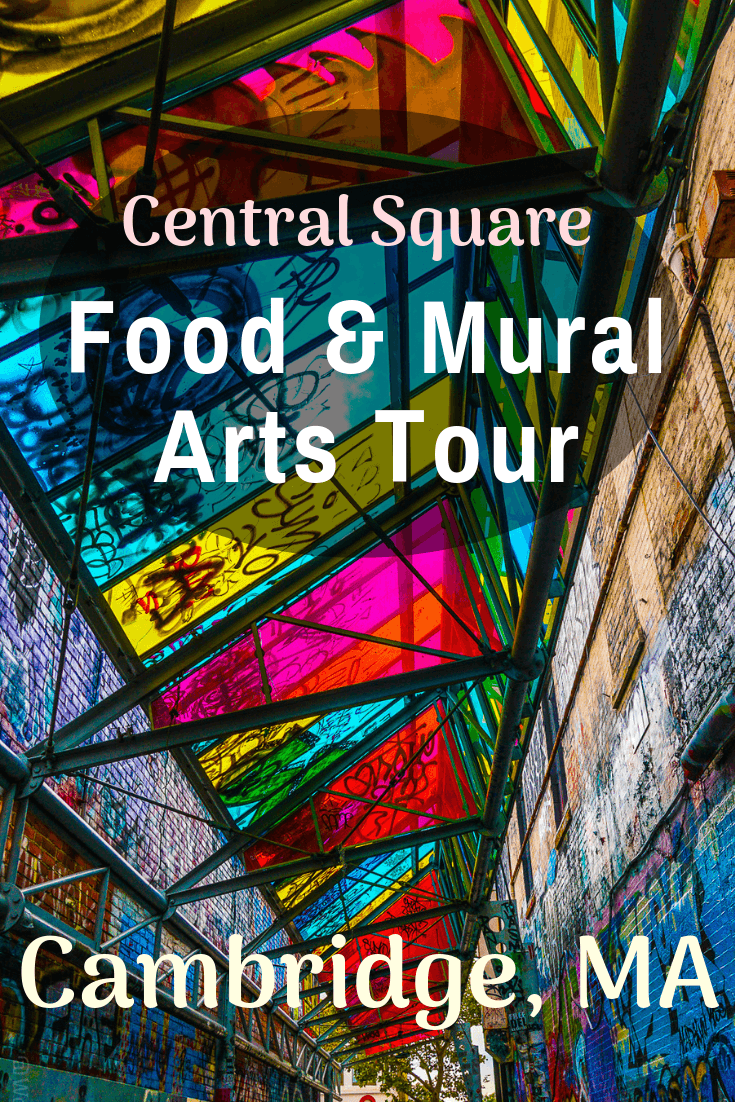 Suddenly, a gust of wind yanked the hat from the woman’s head, sending it tumbling down the sidewalk. Slowly, the woman turned her walker and began inching towards the hat.

Up the street in the opposite direction strode a teenager. With one fluid movement, the young man scooped the hat from the ground and reached it out it to the woman.

For that instant, these two humans were the living embodiment of the mural behind them: Contrasting ages, races, and genders united in one gesture of connection.

The woman nodded thanks, and the young man smiled and continued on his way.

I looked back up at the murals of harmony lining Central Square and murmured, “Art is power.”

Never been here but now it's at the top of my list next time I'm back in Boston! Looks like an Instagrammers dream :)

Thank you for joining us and for the kind words and awesome photos, Lillie! :-)

Thank YOU for guiding us, Sai!

Ariana - World of Travels with Kids

Your photos are just stunning! You bring this to life! And the extra knowledge you got really speaks to why having guided tours add that bit extra to the any place!

A great guide makes all the difference!

This is superb, Lillie! Still dreaming about the scrumptious brussel sprouts at Mainely Burgers!

Excited to be featured since it has been a while since... the Costa Rica incident https://www.teachingtraveling.com/2018/01/28/white-water-rafting-costa-rica/

Ah yes! You are a brave, brave traveler!

I can't believe you actually got to spray paint for yourself. How incredibly awesome! Forget the food, that makes this tour so worth it!