Now that I’ve shared news of my divorce after 10 years of marriage by publishing the article “What to Say to Someone Going Through Divorce,” I can explain a financial warning about something I experienced — a lesson which could save you a major headache in the future. This tip has ramifications for all married people, no matter how stable your relationship.

What follows is my divorce credit card saga, to serve as a heads-up. Everything that happened in my case was completely preventable, and I hope many others can learn from this story in order to avoid falling into the same mistake I made.

How the Credit Card Problem Started

Let’s go back in time to a decade ago, when I was starting marriage. My spouse suggested we get a credit card that provided travel points, and I agreed, having never had such a card with perks before.

He was right that the card was fabulous; the perks soon became so amazing — funding free flights to the ABC Islands and the Colorado mountains, hotels in Anna Maria Island, FL, and more — that I stopped using all my other credit cards, and focused just on that one in order to accrue more points.

Did it occur to me that I was merely an “Authorized User” under an account that was officially in my husband’s name? Not really. Did I notice that my personal cards became deactivated due to lack of use? I noticed, but didn’t think much of it.

As the years went on, I took over bill paying for this family credit card. Every week, I would log into the portal and make sure we’d paid more than the minimum amount. Our payments were never late, and I was a model credit card user.

Flash forward to the divorce asset division. Naturally, my spouse got the credit card, because it was in his name. I deactivated my Authorized User card and opened the bank’s online portal to apply for a new card issued in my name only.

Getting a new card in my name should be no problem, right? I had “Excellent” credit, a steady job, and a history of paying every bill on time. OH BOY, did the next events throw me for a loop!

Oh my! I was startled to see that I’d been denied for the fancy travel points card we’d so enjoyed, but I supposed it would stand to reason that I wouldn’t begin there with my first solo card in a decade. Seeing my credit score was still high, I applied for the lower-tier card.

What was going on?! I called the bank’s Reconsideration Department. It took hours upon hours of getting disconnected and rerouted, but I finally reached someone.

“I’m sorry, ma’am,” said the formal clerk on the other end. “You may indeed have been the one paying your husband’s card for years as you say, but we have no proof of that, because the account was under his name — therefore your activity is invisible to us. Given this, we do not have sufficient information about you, and thus cannot issue you any card.”

Well… ARGH. Because of the foolish choice I’d made in not maintaining credit cards in my own name, and instead merely acting as a “user” under someone else’s name, my ten years of excellent financial activity were invisible — erased.

It had seemed like such a smart idea back then to pool all our points and expenses under one card, but I suddenly saw how misguided it was. I had hidden my own financial prowess behind someone else’s facade, and the years of good work were now worthless.

Being doggedly persistent, I called the bank back over and over, trying to reach someone who would understand the situation. I finally got through to a representative in India who had just been through a divorce, herself.

“You are strong!” the woman hollered into the phone, her voice swelling with solidarity. “You can do this! Let me see what I can do to help, to get your new life started!” I held my breath as she clicked on her keyboard… and then the call disconnected — and I could never reach her again.

I was awash in frustration. The issue with being repeatedly denied a credit card was not just about cute travel perks — it was about the very practical matter that I needed a credit card to launch the very expensive next phase of life. (Divorce is extremely costly, as is setting up a separate household.)

Moreover, this denial was also about my autonomy as a human. When I let my own credit cards lapse, I had unwittingly relinquished my financial agency. How could I get it back?

The Way Out of the Card Mess

I am proud to say that it took me four months, but I was finally able to claw myself out of this post-divorce credit card tangle. Here were the steps to fix the mistake I’d made:

1. I started both a checking account and a savings account with the bank whose card I wanted, and loaded some of my savings from another bank in. On the suggestion of a bank clerk regarding what builds trust with the institution to increase chances of credit card acceptance, I set up direct deposit from my job into those accounts, and activated some automated bills as well.

2. I logged back into an old bank that I hadn’t had a credit card with in eons, but which I had a long-standing checking relationship with. I was blessedly able to get an (admittedly very low-tier) credit card with them. I began putting every possible expense on this card and paying it off every week in full. (Note: I’ve since learned from a reader’s helpful comment, below, that it may engender even more trust with a bank to continually leave a small balance.)

3. When my credit score started to go up in three months, I applied for the low-tier card from the bank I wanted — and got it! I then shifted all my expenses off the old card and on this one, again paying it off every week.

4. On my birthday, I applied for the high-tier credit card I wanted — and was denied. Frustrated, I picked up the phone and called the Reconsideration Department again. I was shuttled between 10 different agents, who then had me upload photos of my passport and driver’s license to prove I wasn’t committing fraud. But then — oh praise the bank deities — I was at last issued the card in my very own name, and my name only! (Cue dramatic angelic music.)

The Credit Card Lesson for Marriage

Now, I’m no financial guru — I’m an English teacher, writer, and artist — but I think there’s a very clear lesson from this personal experience. The moral is this: It doesn’t matter how solid your marriage is — it’s still extremely important to always maintain at least one credit card that is in your name only. Use it once or twice a year, and pay it off regularly to keep it active. If I’d done that, I would have saved four months of frustration!

This tip doesn’t just apply to divorce; as a reader who is a lawyer wisely pointed out in the comments section below, he sees this issue occur regularly with happily married couples in the cases where one spouse who was the primary credit card owner passes away, and the surviving partner is forced to start from scratch again in building credit.

So what about you? What’s your take on using cards belonging to others as an “Authorized User” versus having cards in your name only? Do share!

Want more divorce stories? Read “How to Tell Kids About Divorce: A Full Script Template, Co-Created with a Therapist.”

Note: I took all the lovely photos here at Juno Beach, Florida: a flight funded by travel hacking through credit card points. 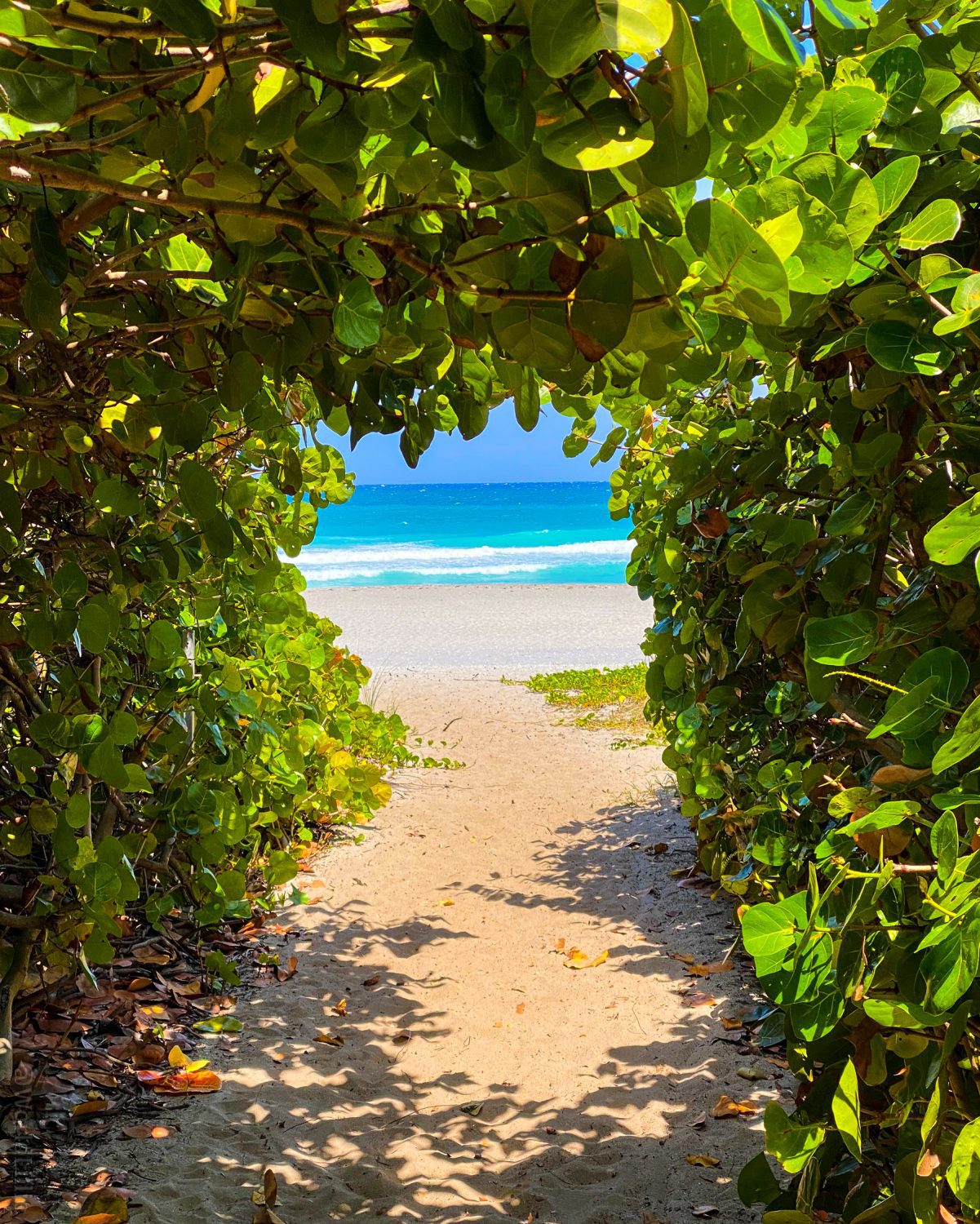 My mom used to tell me stories about friends who went through this and said always have everything in each persons name and only a few things joint to ensure you can build banking relationships on your own. I worked in banking from when I was 15-23 years old and learned a lot and saw this often. Glad you got back on track and climbed back to where you wanted to be!

SN: I pay off a huge chunk of my cards but leave a small balance each month to “please the bank.” This is because the credit system is about “stewardship” vs. how well/fast you can repay, it’s also for the bank to earn money. They want to see what you’re going to do with what they give you. The bank never makes money from people who pay their balance in full every month. The bank also loses when people never pay. So when they see you repay everything before the end of the money, they secretly count it against you when applying to approve you for more credit. So if I have $500 in one month, before the month is done? I leave $50-$250 on a $5k card. Once it’s reported to the credit agency (that my utilization is between 1-10%) and the interest is paid to the bank, then I immediately pay it off. Yes, it’s costs you a bit in interest, but it gives you more leverage because the bank is still a business and the credit agencies still factor utilization in your score.

Thank you so much for taking the time to share this. I’ve edited the article to reflect this new insight. And kudos to you and your mother for helping educate others!

This is true not only of divorce but also passing of a spouse. In my work, I’ve seen surviving spouses have same issue.

Extremely important point! I'm editing the conclusion of the article to include it.

Thanks for sharing this practical information! And is it just me or does "Reconsideration Department" sound vaguely Orwellian…?

Haha, totally! The whole experience of 10 years of my good work being erased was completely out of a Sci-Fi book!