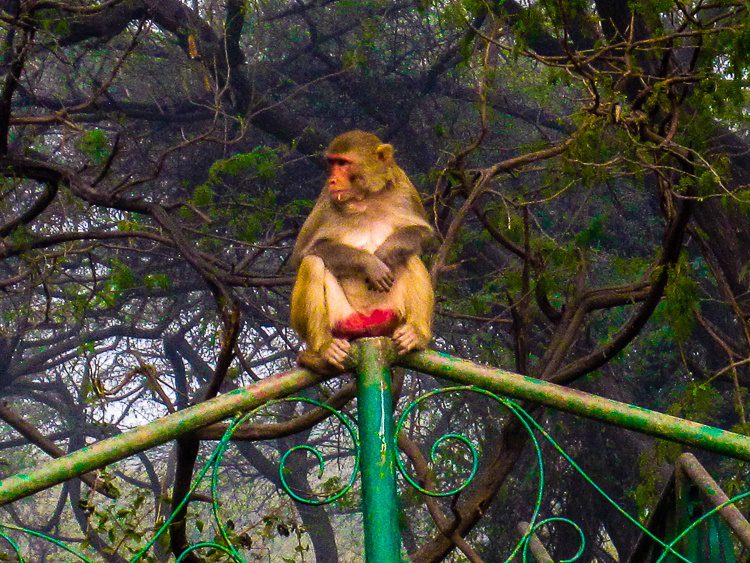 One of many monkeys we saw galavanting around the parks of New Delhi, India.

Where to start? We went to India for 12 days and it was… so much! So much of everything all together: people with animals, rich with poor, fragrances with shocking smells, beautiful colors with dismal grays, chaos with order… I could go on all day. India was everything that everyone said it is, and more. All those rumors are really true!

The colors of the women’s clothing in India blew me away. So beautiful!

After 38 hours of travel (including an epic 14-hour layover adventure in London), my brother David, my husband Colin, myself, and four other teachers (two from America and two from Greece) met in Delhi to unite with the guide for our India teacher tour. It was one of many tour perks that we got picked up from the airport and transported to our hotel. Battling fatigue, we munched dinner, then promptly passed out. 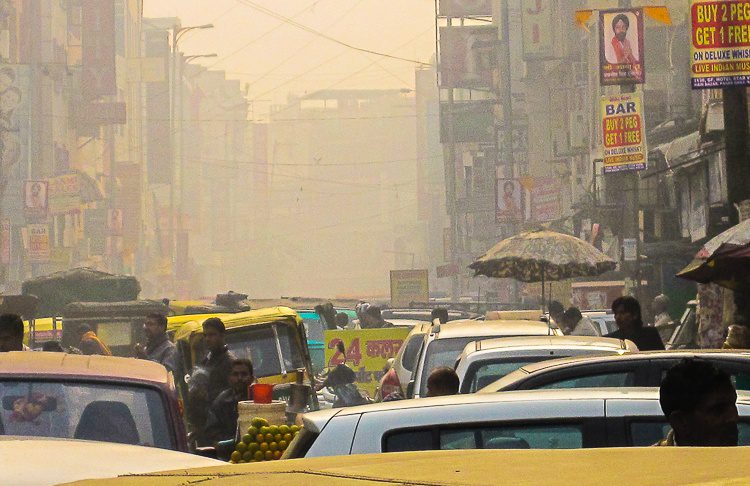 New Delhi in December is a lovely temperature, but the fog is unreal.

Time zone confusion jolted us awake early, and we threw open the blinds to behold… whiteness. The rumor of Delhi’s winter fog was true! We squinted through the haze while piling into our tour van. Where did the fog end and the pollution begin? See the photo above and judge for yourself. But there was no time to dwell on that, because life was TEEMING around us! 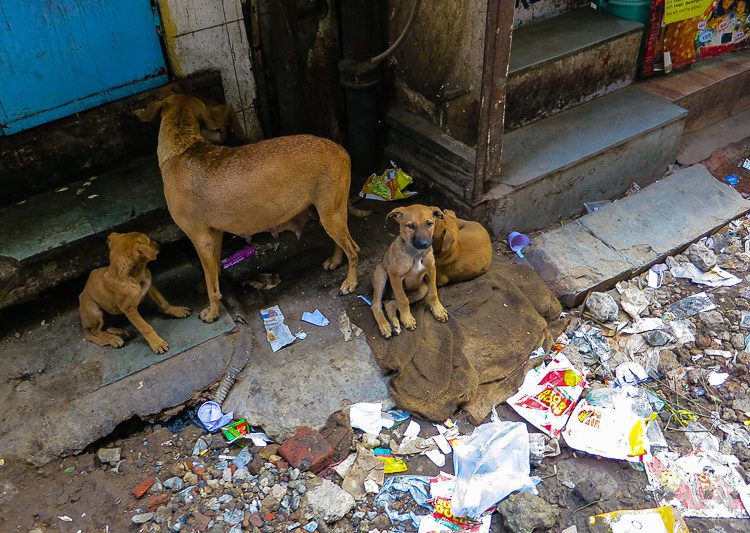 Animals of all types and situations abound on the streets of India.

When you’re in New Delhi, you truly feel the fact that India has 1.2 billion inhabitants. You really comprehend that India is the second most populated country in the world, squeezed into a fraction of the geographical size of the United States. Life, with both the good and the gooey parts that come with it, is spewing from the pores of India. It is exciting, exhausting, and mesmerizing. I stared so hard during our trip, my eyes hurt! 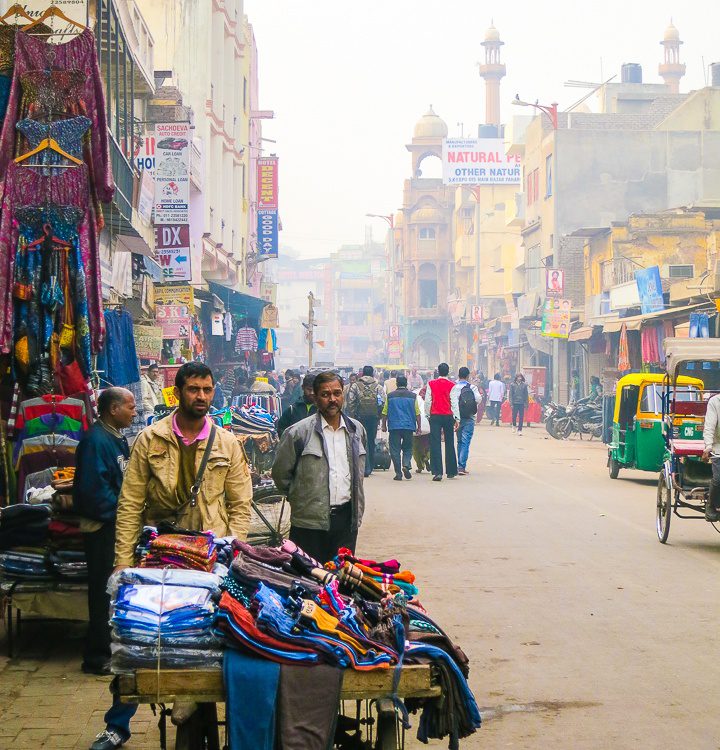 Vendors by the Paharganj neighborhood of Central Delhi.

We spent much of the first half of the day in India stuck in traffic due to riots in the center of the city that protested the terrible assault of a woman on a bus. But even being stuck in traffic in New Delhi is mesmerizing. On one fifty-foot stretch of road alone, there is enough to look at for days.

You may have heard the rumor that cows abound in India, and though that proved true everywhere else we visited in the country, New Delhi has banned cows lolling in its streets. It hasn’t, however, banned bovines from pulling vehicles, as you see in the photo, below. 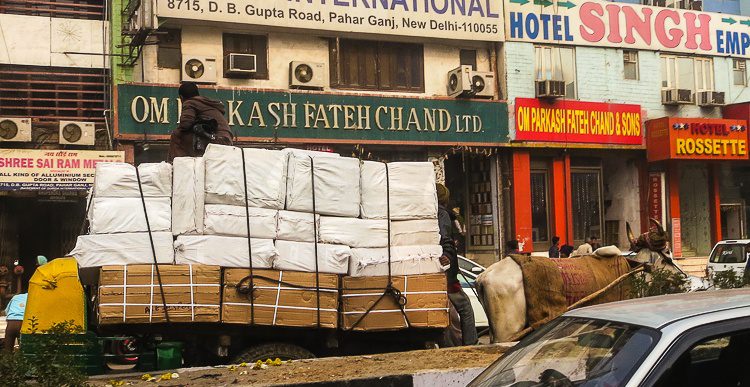 An ox pulling a giant load of packages on a busy street in New Delhi.

But just as we were in the middle of marveling at the urban ox, someone screamed: “ELEPHANT!!!!” Behind us, as we inched along in the smoggy New Delhi traffic, an ELEPHANT was being ridden through the street! Oh day one of India: you did not hold back. 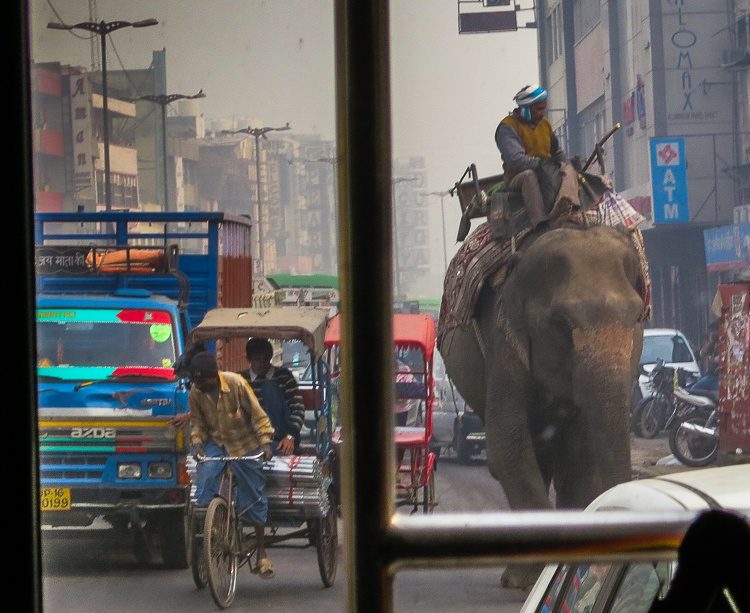 Elephant on the highway!!! Spotted on day one in India.

And what of the temperature? In December, New Delhi is a comfortable 55-70 degrees since it is in northern India. I was definitely glad to have brought my fleece jacket, and we spent much of the trip hearing how lucky we were not to be there during the 110 degree summers! 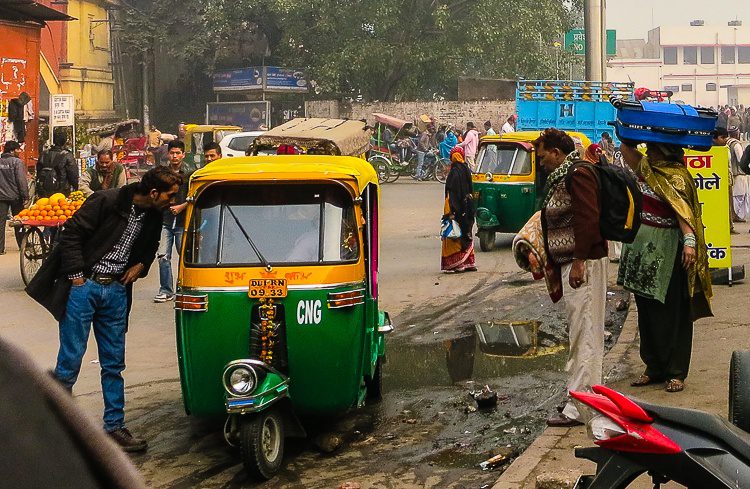 A woman carries her suitcases on her head while hailing an auto rickshaw by the Railway Station.

So believe it or not, this article encompasses only the first two hours of our first full day in New Delhi, India. Yes, the rumors are true: There is more to see in two hours in India than perhaps in any other place on Earth. As our tour van pulled up by the New Delhi Railway Station, we piled out onto the gritty pavement to begin the main activity of the day: a tour of an amazing shelter for street children. Teaser: My 6’7″ brother shared some mind-blowing dance moves with them! Stay tuned for the next article. 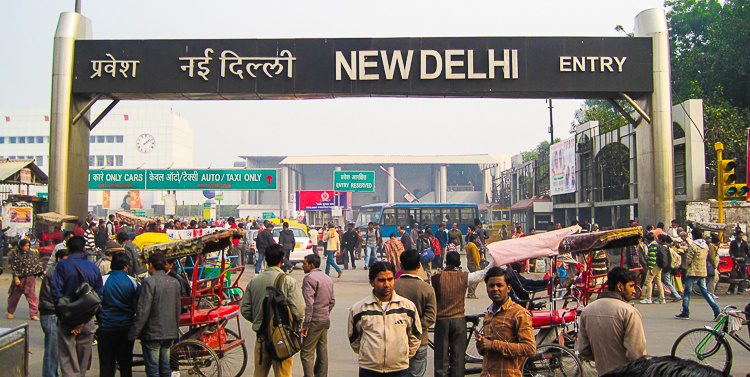 So what about you? If you have been to India, what were your first impressions? If you haven’t been there yet, how do these initial photos match with your expectations? I look forward to your comments, and to putting my remaining 2,056 India photos into articles for you!

we went to India my friend and I and his lovely wife, they were my tour guides and everything all the time we were there when we arrived in New Dehli it was like stepping out of the plane into another world it was very sure real . the heat hit me like a ton of bricks it was around 2:00 am when we arrived the weather was like a 102 or so very hot. I must say though after being there for a day or so i was pleasantly surprised the place is amazing the people are extremely friendly and courteous, bring a camera and watch everyone want their picture taken.The places i seen were amazing we went and seen the golden Temple what an amazing place, its a place of worship a wholly place, simply Beautiful then on another occasion we went to the Taj Mahal the third wonder of the world. in the parking lot it was something like right out of a movie ( Indiana jones) movie you have to see it to believe it. At night at my friends house i would go out on the patio and look at the stars at night and cool off ,a wonderful experience, would i go back your probably asking your self YES no questions asked. I would love to see India once again. I ve taken a lot of pictures hope i can someday show them to you folks . Thanks for reading my story

Thanks for sharing your experience! Love it.

I am trying to decide to go to India for 3-4 weeks. My husband has business there & would travel with him. I keep hearing that I shouldn't go because it's not safe. Everyone I mention it to turns up there nose @ me and Says I wouldn't go if you paid me. Trying to make up my mind I don't want to miss an opportunity. Any thoughts? Very nervous.

We were invited to a friend's wedding in India. We could not wait to go! It's the trip of a lifetime. And, why yes, there are many other places to travel to, a wedding is a fantastic excuse to go!

We have also gotten several sneers and jeers, however, I pity the close mindedness of others. This is a country that is so incredibly different from our country. It's good to learn how other people live.

I say, consider your source. Would you travel with those people anyway? They probably are looking for their next trip to Las Vegas or Myrtle Beach (NOT that there is anything wrong with either of those places!!).

I agree with Lillie! It is too amazing of a country to miss out on. It is intense, but powerful. Get a guide you trust, explore, keep an open mind and connect with people. I have found that the vast majority of Indians I met were kind, caring and curious to learn more about me (as I was, with them!). I traveled solo for a 2 months and loved just about every minute of it.

Hi Mimi, thanks for writing. What an opportunity you have! I would highly recommend going to India with your husband, and to make you feel more secure, I would recommend if possible that you hire a reputable guide to show you around. India is such an important and AMAZING country, and it would be such a shame to miss out on it because of the snap judgements people make. Yes, I found the country to be very intense, confusing, and different, but with a guide it was GREAT. I am so glad that we were able to see India, and I think you will be, too. (Notice that I traveled there in 2012, and am STILL writing articles about it since it was such a wonderful trip.) Good luck, and keep us posted!

More articles on animals on the highway coming soon...

You've captured India perfectly! I was warned that it was an "assault to the senses," but that's just a fun phrase until you experience it. I was in Agra and Mumbai back in November and loved the culture, vibrant colors, and friendly people. But the squalor and smog were a bit overwhelming sometimes. It just seems it's in a constant state of organized chaos.

If you head to Mumbai, be sure to check out Elephanta Island! The cave carvings are breathtaking.

Fantastic captures! We were in Delhi in January 2010 and it was freezing. It went down to 3Ëš We didn't have the clothing for it, so we decided to take a break from India (we'd been there over 2 months at the time) and fly to Sri Lanka for a month. It was heavenly and a much needed break. We then came back to India for another month to tackle the rest of the country. Enjoy your time there!