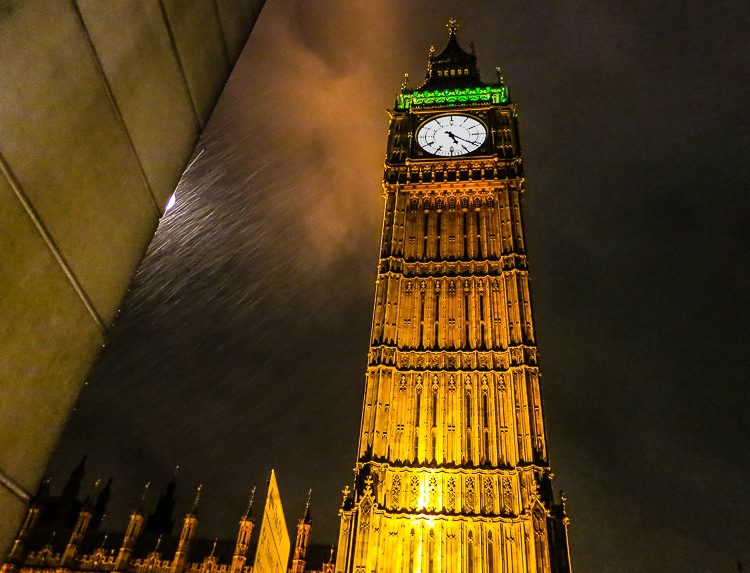 If you plan your London layover right, you can see Big Ben and still catch your flight!

I am back from India, it was great, and I’m exhausted!

Over the next few weeks, I shall chronologically unfold all that happened in our India adventure, so let us kick it off with the first element: our 12 hour layover in London between Boston and Delhi.

What the heck is the best thing to do for 12 daytime hours after a 5 hour red-eye flight from Boston? Easy. Here are your instructions, photographically presented. 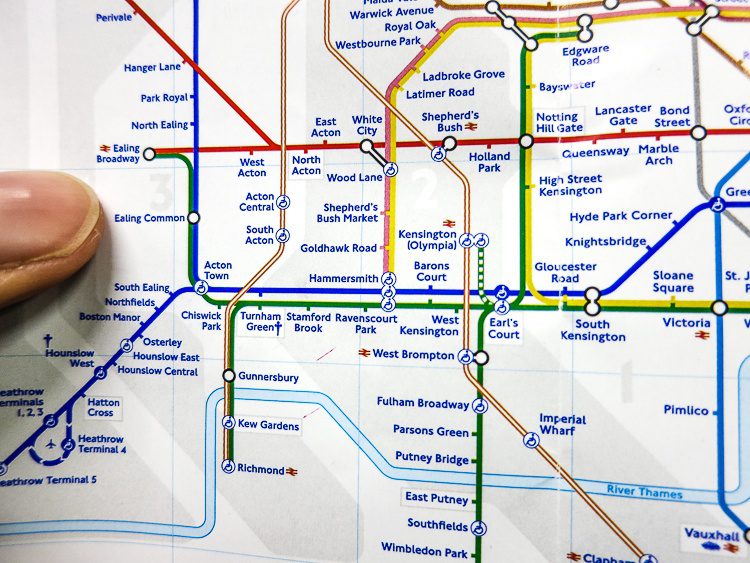 Hop on the Tube from Heathrow Airport to the best stop…

Step 1: After taking a brief (er, several hour) nap in the airport, clear Customs and head for London’s futuristically-nicknamed “Tube” subway. Take the Blue line in the direction of… Cockfosters. (Stifle giggles.) At the South Kensington Stop, switch to the Yellow or Green line towards Westminster and get off at that stop. This whole thing takes forever… or rather, an hour and a half. 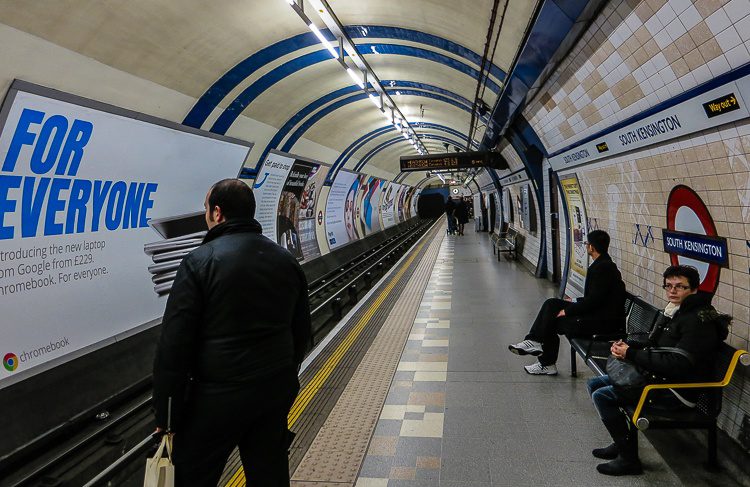 Step 2: Emerge from the Westminster train station in a stumbling daze (a red-eye flight, time change, airport nap, plus 90 minutes on a train will do that to you). Realize it is dark, raining, and cold. Pause to scoff at London weather– then suddenly feel your breath catch in your drizzle-soaked throat as you look up and see the most beautiful train exit sight imaginable: Big Ben’s belly! 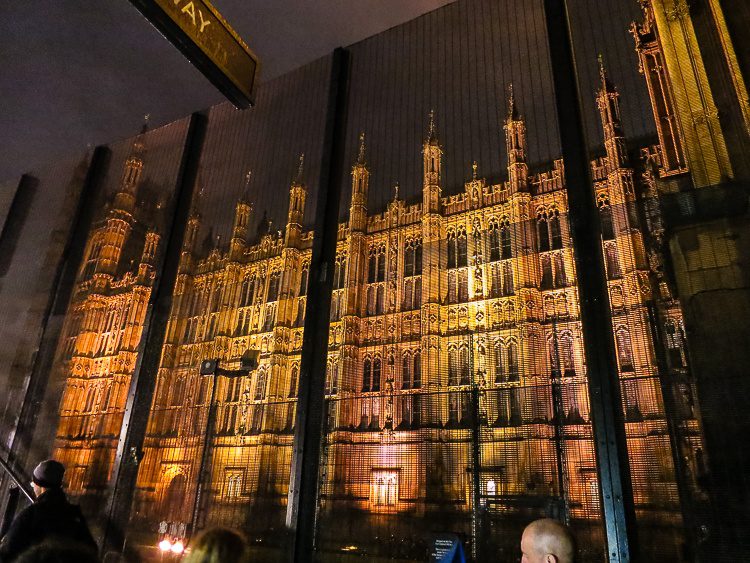 The coolest view I’ve ever seen while emerging from a train station: Ben Belly!

Step 3: Dash into the drizzle to the glory of Big Ben! Do not get hit by cars driving the wrong way, nor by throngs of tourists and locals stomping down the sidewalk. Shield your camera from dollops of rain. 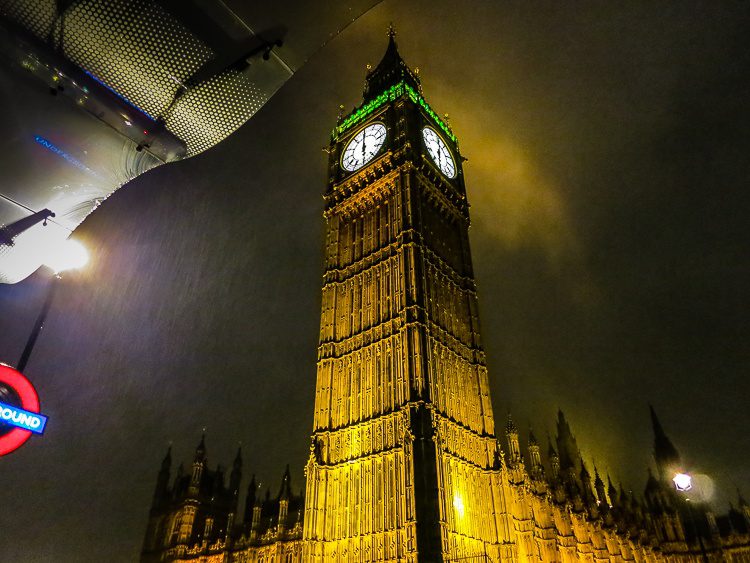 Big Ben does not disappoint.

Step 4: Remember your facts. Big Ben is the nickname of the clock tower (officially called Elizabeth Tower) on the Palace of Westminster, the building where the British Parliament meets to do its government thang. Big Ben is the third tallest freestanding clock in the world, and was finished in 1858. Most importantly, however, it was the site of the climactic fight scene in the animated movie, “The Great Mouse Detective.” 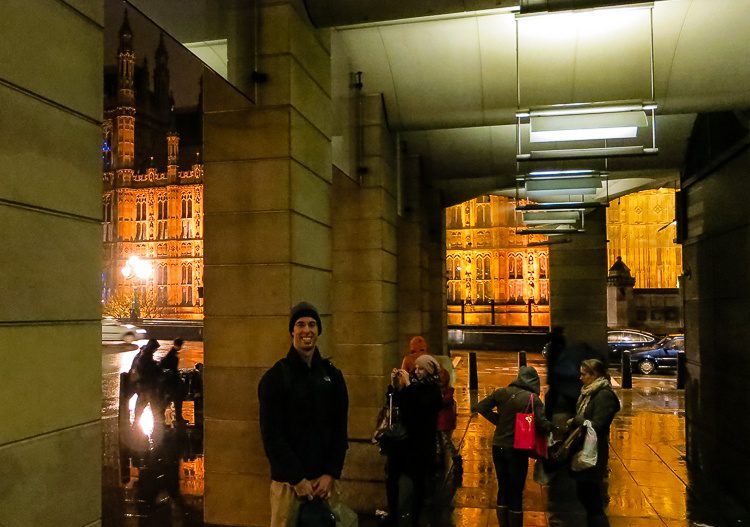 This overhang will keep you dry from the ubiquitous drizzle as you photograph Big Ben.

Step 5: Oh my! You have been so entranced by Big Ben that you missed another tourist gem just across the Thames River… The London Eye! 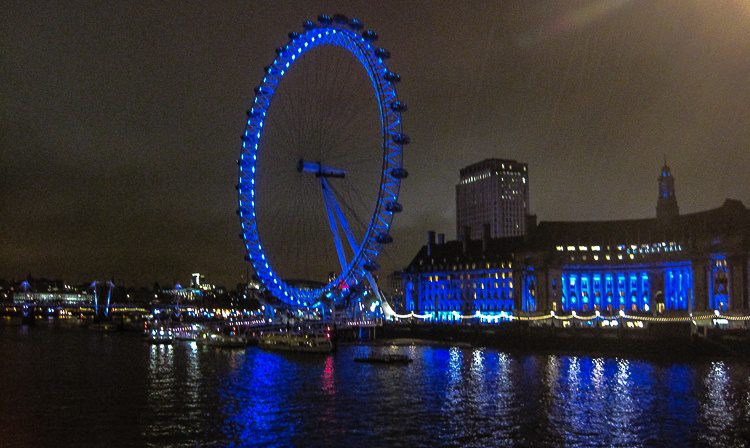 The London Eye is winking across the Thames at Ben.

Step 6: Argue with your husband. Him: “That’s a cute ferris wheel.” You: “That’s not a boring old ferris wheel! That’s the London Eye!” Him: “Looks like a ferris wheel to me.” 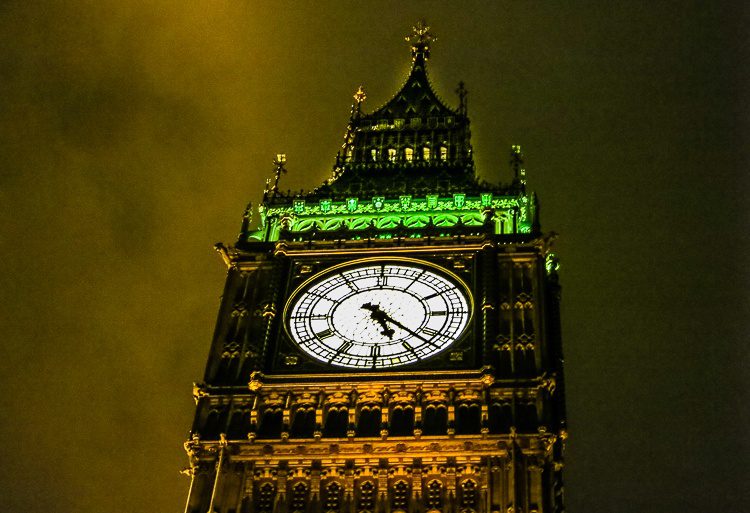 How could you not love that face? And “Big Ben” sounds better than “Fat Steve” or “Obese Larry.”

Step 7: Eye your watch and calculate how much time you have before the long trek back to the airport if you want to make your flight in time. Eye the bridge over the Thames towards the London Eye. Feel the allure. Also feel cold. 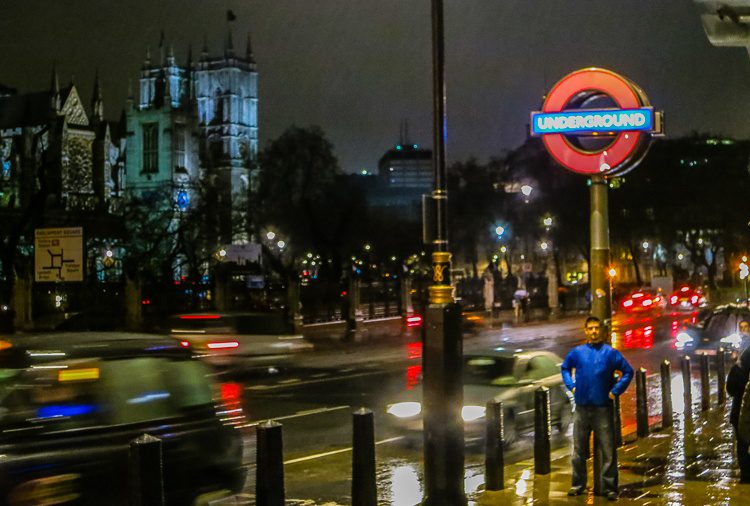 Of course, pose with the sign for the Underground.

Step 8: Declare that you shall cross the bridge to the London Eye! Become soaked with mist-fog-rain by the third footfall. Ogle double-decker busses in their red glory. Drink in the London Eye’s pulsing blue. 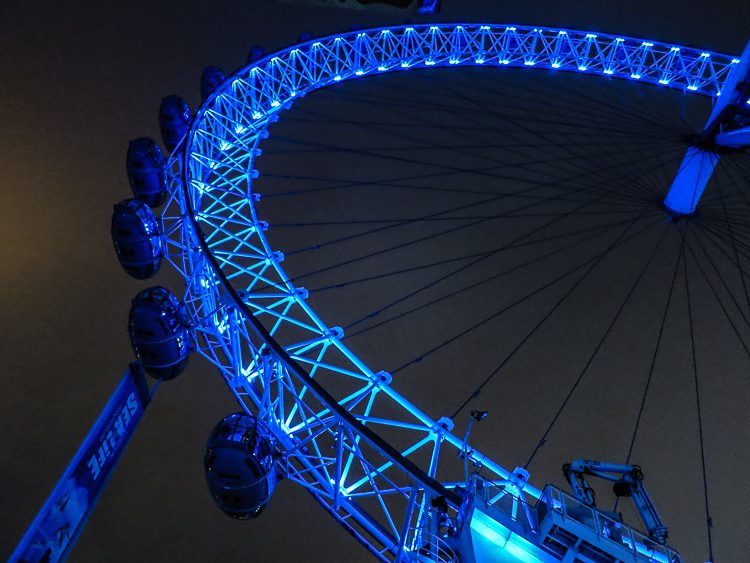 Cross the bridge across the Thames to get right under the London Eye. Artsy!

Step 9: You have crossed the bridge!!! Shiver. Feel the weight of your backpack. Take artsy photos of the London Eye. Wish you had the time and money to ride it before your flight. Glance frantically at your watch. 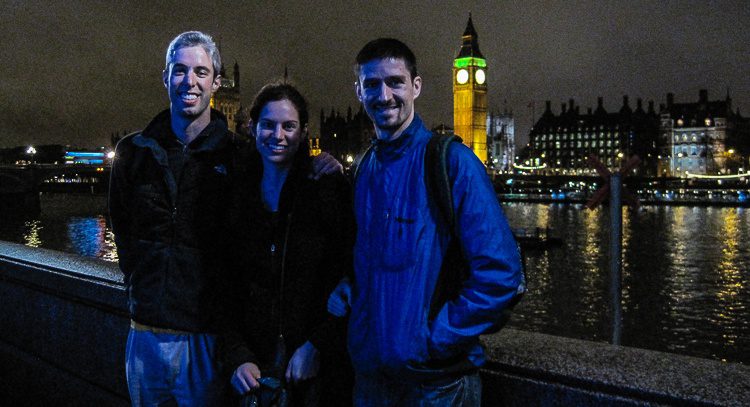 Good times in London with my brother (left), husband (in blue), and Ben (illuminated).

Step 10: Cajole German tourists to take a nice photo of you with Big Ben glinting across the river. Subsequently get roped into taking photos for those same German tourists, then the next ten couples who walk by. Freak out about time. Be about to run back across the bridge when you spot a store called… 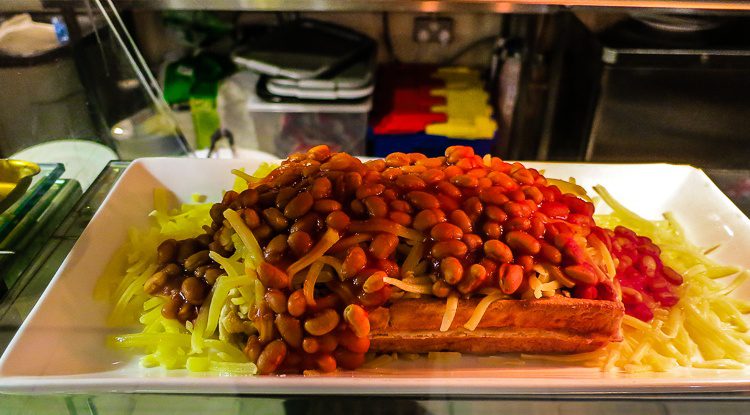 Find a place called “Wonder Waffle” and gape at its options. (Bean waffle?!)

Step 11: “Wonder Waffle?!” How could you pass up a Wonder Waffle, whatever the heck that is? There are all sorts of crazy waffle options at this magical place. You may be getting tight on time to get to the airport, but your pants are getting loose with hunger. A waffle of some sort is essential. 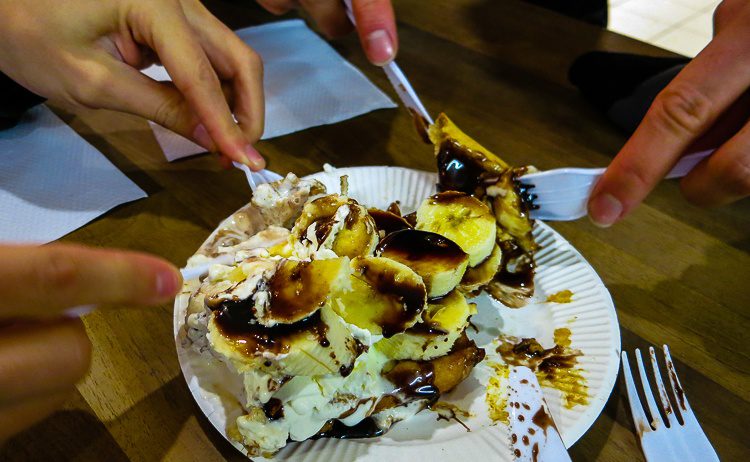 Order a Wonder Waffle with bananas, chocolate, and whipped cream instead.

Step 12: Decide against the bean waffle and order the heaping dessert waffle. Be very disappointed at the fact that it actually stinks. It’s a spongy, luke-warm disaster. Oh well– at least it looks decadent. 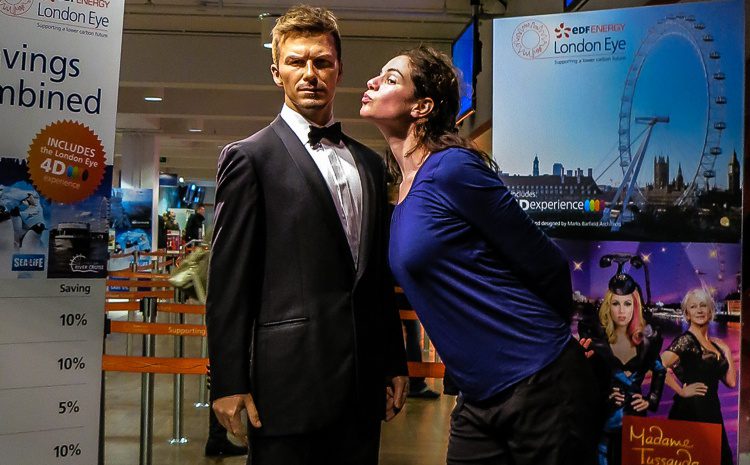 Ooooh David Beckham! What a delight to see and kiss you!

Step 13: Find David Beckham (in plastic form) standing around (in an advertising display) and kiss him (with a hygienic half-foot distance from the already-slobbered-on plastic). Eeeeiii!

Well, that’s one way to do a long layover in London!

Step 14: Take a final fabulous photo of Big Ben before slogging back across the bridge and onto the 90-minute Tube ride back to the airport to catch your next flight. Be happy you peeked at London, at least a teeny tiny bit, rather than staying in the sticky airport sofas for those five hours. Well done!

There you have our 12-hour London Layover escapade on the way to India. What is YOUR advice for long layovers in London or elsewhere? Do you enjoy the sight of Big Ben and the London Eye as much as I do? And would you kiss plastic David Beckham square on the dirty cheek? Do tell.

I get to London at 830 at night and I leave next day at 1220 noon, what can I do during this time especially at night.

Hi Diana. Exciting! I don't have specific suggestions beyond what is in this article, but maybe other readers do. Happy travels!

I have a question what did you do with your luggage I have a 21 hour layover which will require me to recheck my luggage. Do you have any suggestions ? I would love to hang out in London for most of that time but I have two huge suitcase that will be traveling with me?

Good question! Check with the airline if you can either check in the bags early, or store them in a secure locker at the airport. You certainly don't want to be carrying those all around the city! Another option might be to use credit card perks or a la carte payment to get into an airline lounge that might allow you to keep bags there. Enjoy!

Thank you for the list! I'm planning a 5 hour tour of London (10hr layover). How much money do you think I should exchange? Can credit/debit cards be used in most places?

Ooh, good questions! The amount of money depends what you're planning on doing, so if it's just transport and food, not a huge amount, and you're right that most places will take cards -- just make sure to research if your card has international fees or not for use abroad, and call your bank before you go to let them know you'll be in another country. Have a great time!

What time did your flight get in? We're trying to figure out if we have enough time to do this. I know the tube shuts down at midnight. Our flight gets in at 7:50 pm.

Denise, that's a good question. Our flight got in early (10am-ish), so we didn't have the issue of the tube shutting down. I think you're right to be a little wary, since it takes a while for you to deplane and gather your stuff, so you can figure you wouldn't be headed into the city until at least 8:30pm. If you're all right with a very short peek into London, I think it's still doable to do this, if you keep an eye on the time. Another option is something a previous commenter mentioned: instead of the tube, take the rapid express transport from Heathrow to the city. That will buy you more time than the loooong tube journey. Have fun!

Bricklane for a Curry is sensational if you get the chance to go in London. Camden Markets on a Saturday is another awesome place to go!!1