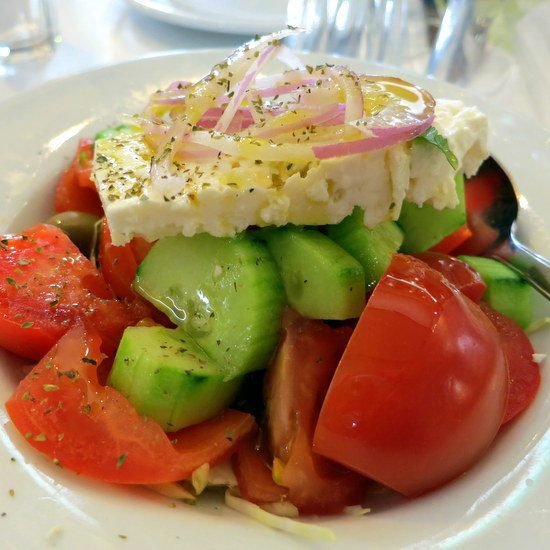 The ancient Greek gods did a lot of eating of their children.

Zeus ate Athena’s pregnant mother, only to have his daughter spring out of his head once Hephaestus split it open with an axe.

Cronus ate his first five children until his wife tricked him by switching a tasty rock for baby Zeus.

Inspired by the ravenous appetites of the Greek gods, on this teacher tour of Greece, we have been eating like monsters.

Only, instead of infants, we have been eating amazing Greek food! The freshness and deliciousness of the cuisine here thrills us.

Here is a tour of just a few Greek culinary delights which we adore. 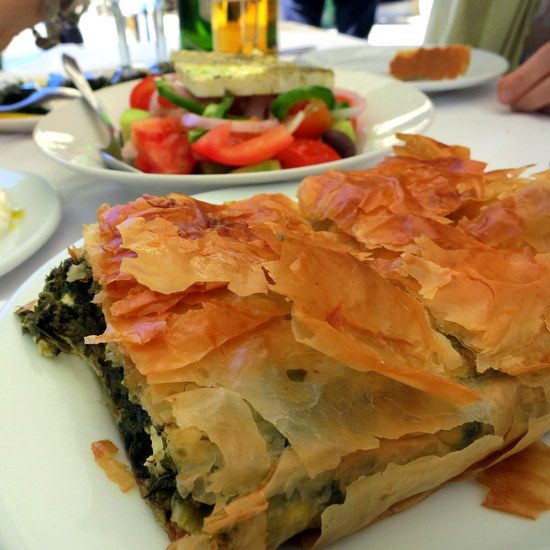 At home in America, tomatoes and cucumbers are kind of lame.

They’re soggy, water-flavored, and free at Subway to add to sandwiches because no one really cares about them.

In Greece, however, these foods make a salad bursting with joy!

Our tour guide, Mara, explained that every town has a different recipe for this dish, but they are all delicious!

The Spinach Pie we indulged in today had a light-as-wind crust which melted in our mouths with a delicate, “Crunch!” that led into the zing of moist spinach and feta.

3. Let your eyes be soothed by the Tzatziki Sauce.

Tzatziki has been served at every meal we have eaten here, and adds a cooling, refreshing smoothness to food.

My coworker who is also on this trip insists that it’s both easy and delicious to make Tzatziki at home, and we may need to learn how to, we’ve so gotten in the habit of eating it.

Whenever we try to order anything at a restaurant, the waiter unfailingly reprimands:

It’s almost a threat. But clearly, there’s a reason it’s so ubiquitous: Tzatziki is good! 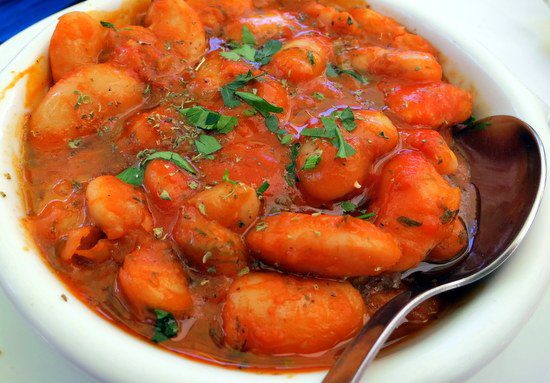 Gigantes: Massive and “soft as a sheep brain” beans!

“You MUST try them,” gushed our Greek co-tour-er, Gilda. “They are soft as a sheep’s brain!”

“Yes,” smiled Gilda serenely. “In Greece we enjoy eating sheep brain, and it is very soft and delicious.”

Gigantes are giant beans, not brains, but whatever you desire to compare them to, they are fluffy and great!

This post could go on and on about the other foods we’ve loved having in our mouths and tummies this week in Greece. 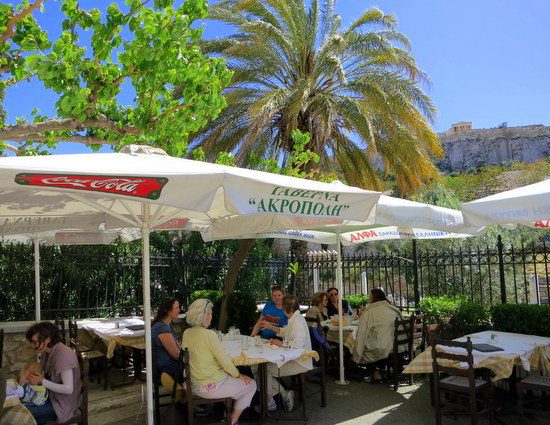 We ate lunch today under the palm trees, sun, and ACROPOLIS!

But for now, let’s turn our eyes from our plates of luscious food to the location of the restaurant in which we ate lunch today.

We were in Athens, Greece, under a sun umbrella, under a palm tree, under the sapphire blue sky and golden sun, gazing up at…

…the Parthenon high atop the ancient Greek Acropolis!!!!!

Odds are, we enjoyed our meal far more than Zeus liked his baby Athena sandwich. :)

Have you noticed that the Greek Salad in Greece looks and tastes totally different than in other countries?! Not sure, which one I prefer?! :)

I tried replicating Greek salads, but it never came out as good as the ones I had in Greece! The oil, the spices and the feta on top are simply much tastier there... I don't know how they do it, but if want to have a real Greek salad, I will only find it in Greece.

The Greek Salad you have pictured above is absolutely yummmmmmy.. and simple to make.

I am going to make it my lunch tomorrow (already my dinner for the night) :-)

Thanks for your blog :-)

Wow the food certainly looks good, though i have only tried greek pizza

Thanks for sharing about Greece-I'm headed there in a few days and if it's as great as you make it sound/look, I can't wait!

Huzzah! Have a great time, and keep us posted!