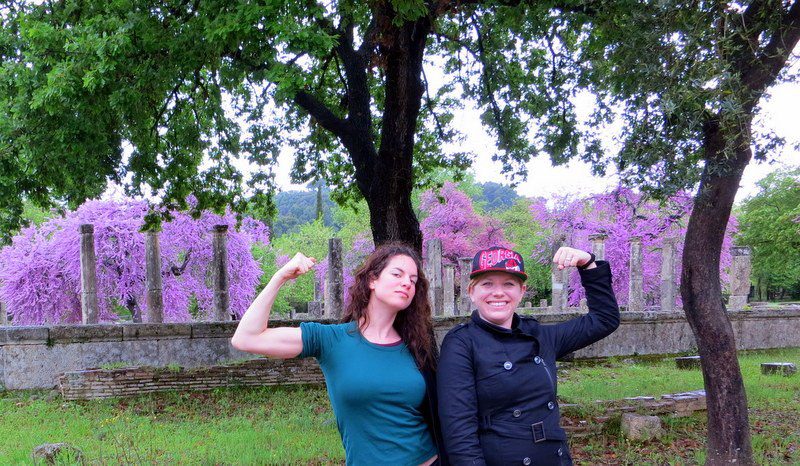 Flexing with a fellow Boston teacher at the original site of the Olympics in Olympia, Greece!

I never realized the sheer amount of nudity in the ancient Olympic Games until our teacher tour of Olympia, Greece this week.

“The ancient Greek Olympic Games took place from 776 B.C.E. to 394 C.E.,” our guide, Mara, explained. “The athletes were all men, and they were all… NAKED. They were also covered in oil.”

“Whoa!” gasped one teacher traveler, aghast. “Were the spectators nude, too?” 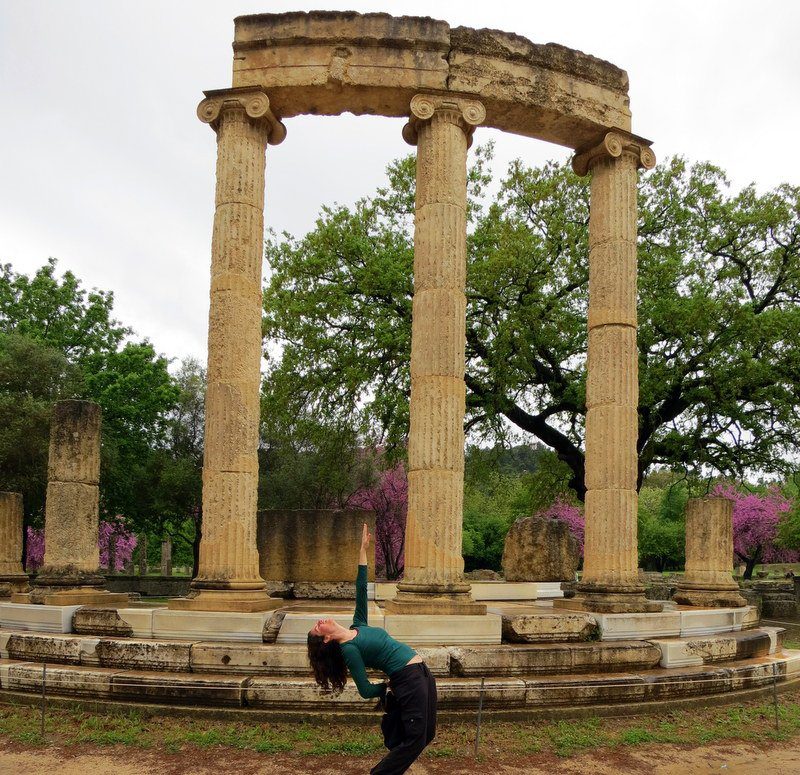 At the Temple of Hera in Olympia, Greece!

“Well,” Mara laughed, “Funny story. The only people allowed to attend and watch the Olympic Games were men, and the first years of the games, they could be clothed. However, one day a woman snuck into the stands, dressed as a man, to watch her son compete.

The child actually WON, and his disguised mother got so excited, she started jumping up and down– and accidentally revealed her woman parts! She was thrown out, and from then on, all the spectators had to be naked, too.” 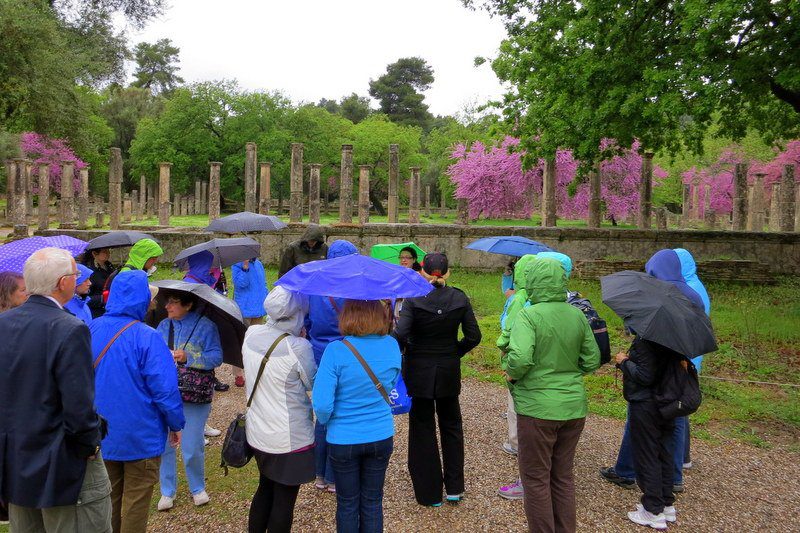 Our teacher tour group, huddled in the magic rain by Olympia’s flowers.

That’s a lot of naked people!

Let the record show: when we toured the ancient Olympic site in Olympia, Greece this week, we were not naked.

This was fortunate because it was chilly and raining, and also because I prefer to wear clothes when on a teacher travel tour. Just a silly preference.

I initially griped about the rainy weather when we descended from the bus, but it actually turned out to be for the best. The rain created magic. April’s billowing purple flowers popped out among the rain-brightened emerald trees, and mist evoked the mysterious realm of the gods. See the photos for proof! 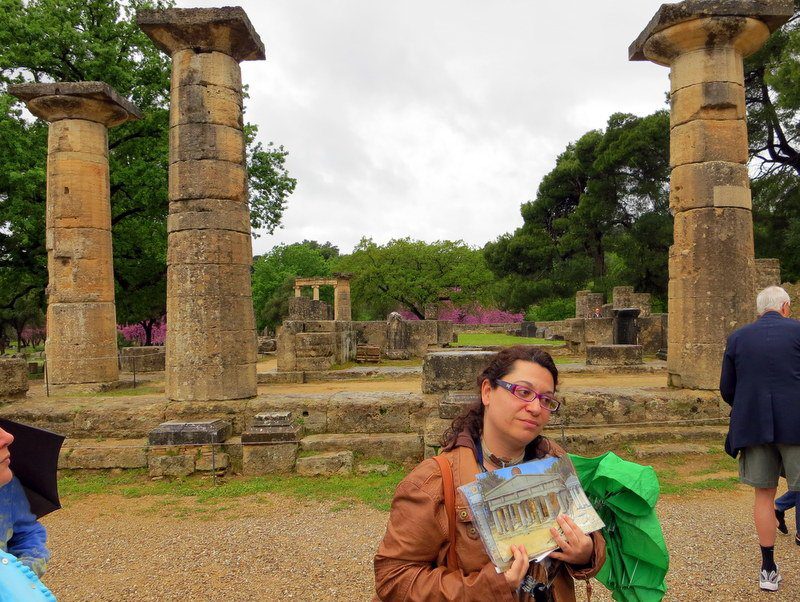 Mara shows a picture of the AMAZING 40-foot Zeus statue that used to fill the Temple of Zeus in Olympia!

“Why did the Olympic games begin?” asked Mara. “Legend is that a king asked the Oracle of Delphi how to bring peace to his constantly-warring realm, and the Oracle replied that he must create the Olympic Games. That way men might compete in an athletic way, rather than slashing each other to death.”

Indeed, this is sage advice. When you compete in sports alongside someone, even if they may look or act different from you, you gain respect for their abilities.

To further push the Olympics as a vehicle for peace and cross-cultural understanding, athletes were required to live and eat together for the time leading up to the games. Word is that sampling each other’s strange foods built intercultural understanding! That’s how I roll, anyway. :) 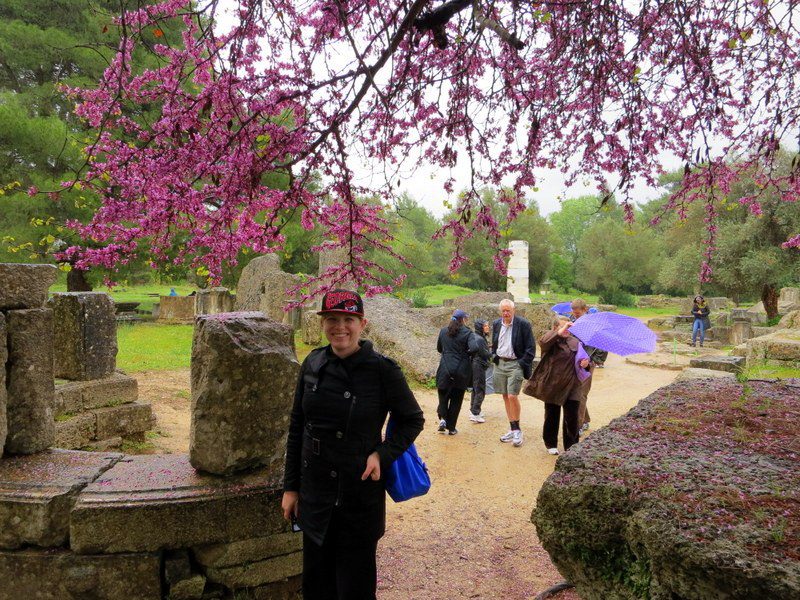 Jen in the remains of the Temple of Zeus, wearing a student’s hat that he asked her to photograph in famous Greek sites.

We teachers had our own personal Mini-Olympics during our Olympia tour. I’ve been lifting mad weights at home as part of my Wedding Arms Workout (can I please get a shout-out from some reader, somewhere in the world, on the buff condition of my arm muscles?!) and thus in a lull during our tour, I did twenty push-ups off a 2,700-year-old stone. A security officer with a giant umbrella stared at me the whole time.

“Jeez,” murmured fellow Boston teacher, Jen, “I thought he’d try to stop you or something, but I guess these rocks are made for using athletically.”

Then we emerged onto the first ever Olympic race track! It looked like a giant brown puddle. And we raced in it! (No, there were no workout motivation quotes lining the track.) If you count who in our group got to the far end first, I guess I lost, but if you count who got back to the original finish line, thus completing the loop, I totally dominated! Either way, it was a lot further than it looked, and I still have mud splashes along my jacket back and pants rump. 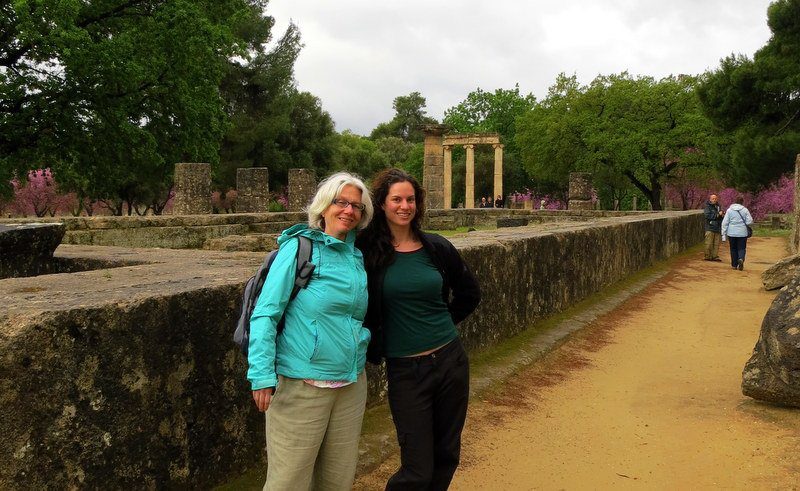 At the end of our tour, we all suddenly noticed that many of us entered this trip with colds and flus, but after a week in Greece, our health is now awesome! We gazed around at the purple flowers, green trees, and misty fresh air.

We stretched our sore muscles, which have been exercised from a week straight of full-day walking tours, and realized, the Greeks had it right: It IS healthy and essential for humans to embrace exercise and the outdoors! We just don’t need to be naked and oiled up to do it.

The idea of men only in the 1st olympic games was to rid them selves of their aggression towards each other, with-out bloodshed. To be naked, is all the better to show off their muscles, as the 1st contests would have being wrestling, javelin, shot put. As far as nakedness is concerned in this day and age, in public, look up the "world naked bike ride in London", 2000 riders, 90% naked, and 80% men, riding through central london, from 3pm to 6pm, with children watching and bus loads of tourist.

disputes between countries should all be settled in the olympics instead of wars haha. If America has a problem with China for example they should put their best athletes in the olympics and who wins the gold medal will win the war. no violence no destruction, just pure competition. :)

Why does everyone keep saying it was gross? Gee, people it is only the human body what is so gross about it?

I'm guessing you know this, but gymnasium means "place where you do sports naked." Or something like that.

I don't believe that other women didn't go before the woman got kicked out of the Olympic Games. They were probably in the same position as the woman who got kicked out, but they didn't scream and jump up and down. It is good to calm down sometimes...