In Greece with the famous female statues at the Acropolis, mimicking their serious expressions.

The wind atop Greece’s Acropolis whipped my hair like a milkshake as I stared at the towering stone women. Why did they look so familiar?

“You are looking at the Caryatid Porch of Erechtheion,” our guide told our teacher tour group, “built around 420 BCE… over 2,400 years ago.”

I knew I had seen those statues before back in Boston… and often. But where?

A closer peek at the Acropolis’s Caryatid Porch of the Erechtheion in Athens, Greece.

“The design is remarkable,” our guide continued. “Each woman is carved with unique characteristics, and their necks are slender and feminine, even as they hold up that heavy stone roof! The five figures you see here are replicas. The real ones are currently in the New Acropolis Museum in Athens, which we will tour later. They are in the process of being painstakingly cleaned by laser.”

“Where is the sixth?” another teacher asked.

Our guide’s face tightened. “The sixth statue was stolen by Lord Elgin in the early 19th century and is, you could say, being held hostage in the British Museum in London. We keep that sixth pedestal empty to remember this loss.” 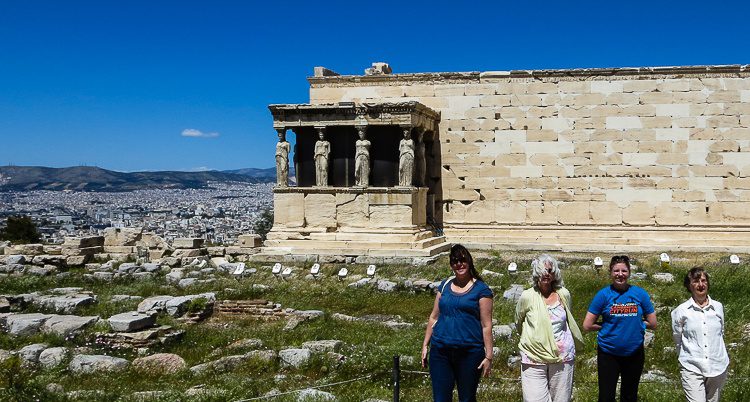 Don’t these four educators look like the four front statues??? Man, it was windy.

As I snapped a photo of my coworker in front of the statues, it suddenly hit me where I had seen those statues before: I walk past them 180 days each year in the entry hall of the school in Boston where I teach!

“Ahh!!!” I exclaimed, slapping my forehead. If I hadn’t traveled to Greece, would I ever have realized the meaning behind my school’s statues and architecture? Nope– I likely would’ve continued striding by the stone women day after day, always thinking, “Geez, that’s some weird art.”

Thus is the power of global learning: Travel lets you unlock secret new layers of understanding! 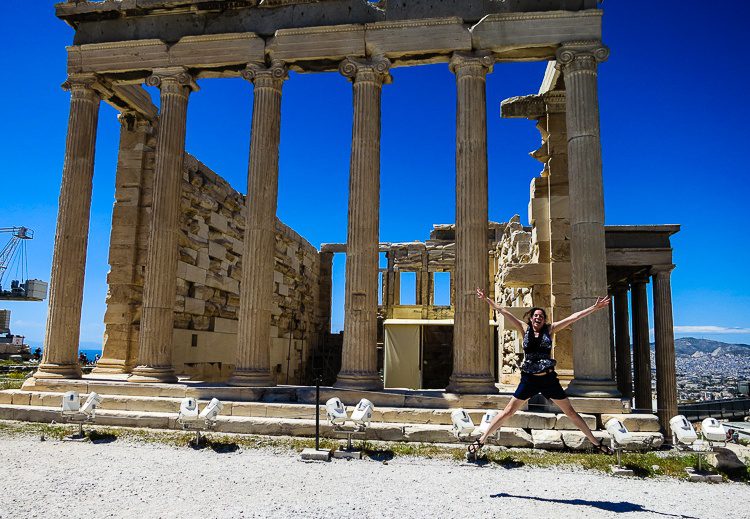 Jumping for joy in Greece after travel unlocked a secret new layer of understanding!

It’s kind of like the video game Super Mario Brothers, when you find the button that turns coins into bricks and suddenly see that those new bricks form steps to allow you to climb to a secret level full of coins! (Yes, I am a secret video game geek.)

After the statue realization in Greece, I look around our world with curiosity. What other allusions am I missing??? What journeys will it take to discover them?

Acropolis women, now I know when people make allusions to you!

So what about you? What secret layers of understanding has travel (or mental travel through study) unlocked for YOU?

This was great to read! I had no idea those statues were modeled after the ones at the Pantheon and I've been to Athens a few times!

I do have this experience traveling and learning bits and pieces of new languages...I often come across the "aaahhh so that's why we call it that" moment.

Fascinating. Thank you Lillie for sharing this amazing place.

Oh I so wanted to see a picture of the statues at your school, too! I loved my visit to Athens and especially those statues!

My friend said the same thing! My teaching day is so hectic that I didn't find time to bring my good camera in to school, but maybe in the future I'll be able to add the photo in. Good suggestion!

Wow! I can't believe you had visited Greece! Funny thing is I am Greek and all my family members live there! I've always wanted to go there, especially to Athens. I think it's beautiful, my dream is to go there one day! Well, I hope you enjoyed your visit over there! P.S Your article was amazing and interesting!

I am Greek so it's kind of weird I never noticed the statues were Greek. I have never been to Greece before but we are planning to go next year. I am really excited because the pictures I have seen are beautiful. How was your experience in Greece? Also what part did you go to? My family is from Lesvos.

So exciting! Click the "Greece" tag under the article to see the rest of the places we went. You'll have a great time!