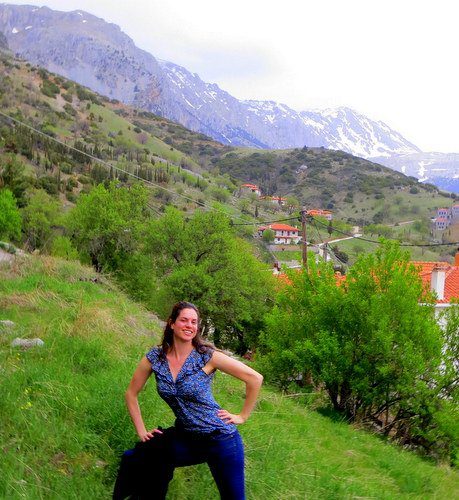 With ancient Mount Parnassus, behind, snow-capped!

“If you look to the valley below us,” our guide, Mara, instructed our busload of teachers touring Greece, “you will see the crossroads where Oedipus killed his father.”

“WHAT?!” I gasped, nearly inhaling the sesame-seed-encrusted almond in my mouth.

For three different years of my eight-year teaching career, I’ve taught kids the scandalous play, Oedipus Rex… and now we were driving by the actual scene of the crime?!

If you’re not familiar with the infamous legend of Oedipus, first performed in 429 BCE, you may not believe we’re allowed to read this in schools.

The story goes, when Oedipus was a baby, the Oracle of Delphi told Oedipus’s parents that their son would grow up to kill his dad and marry his mother. “Yipes!” said his parents.

To avoid this creep-tastic fate, Oedipus’s parents sent wee Oedipus away to be killed. Unfortunately or fortunately, however, the baby was saved and adopted by a family that took pity on him, and the boy grew to adulthood, never knowing he was a foster kid. 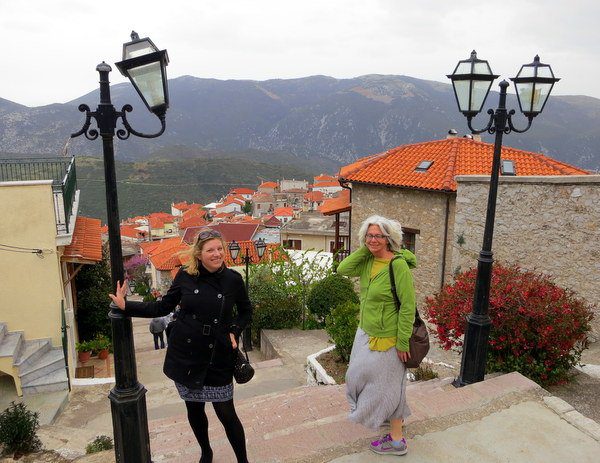 Great teacher friends on the endless stairs of Arachova, Greece.

One fateful day, fiery teen Oedipus ran into his dad on the road between Delphi and Thebes. Neither man knew he was related to the other, but they both had hot-as-heck tempers. The two got into such a big fight that Oedipus slew the older man. Prophecy Part One, fulfilled. D’oh!

Oedipus then went to the dead man’s house and married his wife, Queen Jocasta of Thebes. Yes, that’s right: Oedipus married his mother and didn’t realize it. And thus the prophecy came fully true in a “NOOO!!”-style, forehead-smacking fashion, and then everyone got killed or committed suicide.

And our tour bus was chugging along above that site?! Amazing!

“Now,” continued Mara, “we do not know if the legend of Oedipus actually happened, but the road they were talking about between Delphi and Thebes, it is most certainly this one. It has been the main path through these mountains for thousands and thousands of years.” 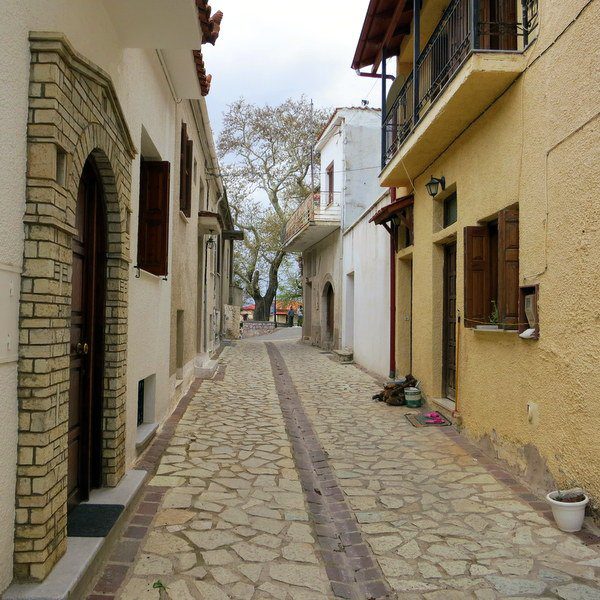 One of the charming narrow streets of Arachova.

A chill ran down my spine. So many of us in this world have experienced years of magical joy studying ancient Greek names, places, and stories in school, and now to encounter them in person… WOW.

“And here,” declared Mara as a stunning snow-capped mountain slid into view, “we pass by Mount Parnassus: the home of Muses.” Ahhh!

I worried, before coming here, that to see these ancient sites in 2012 would somehow cheapen or ruin them, but quite the opposite has been true. Though I haven’t yet had a thunderbolt-throwing competition with Zeus (still holding out hope), there actually is a magical sparkle in the air in Greece.

I think this is due to how respectfully and thoroughly Greeks seem to preserve, honor, and refer to their fantastic history. They weave it in with the modern. 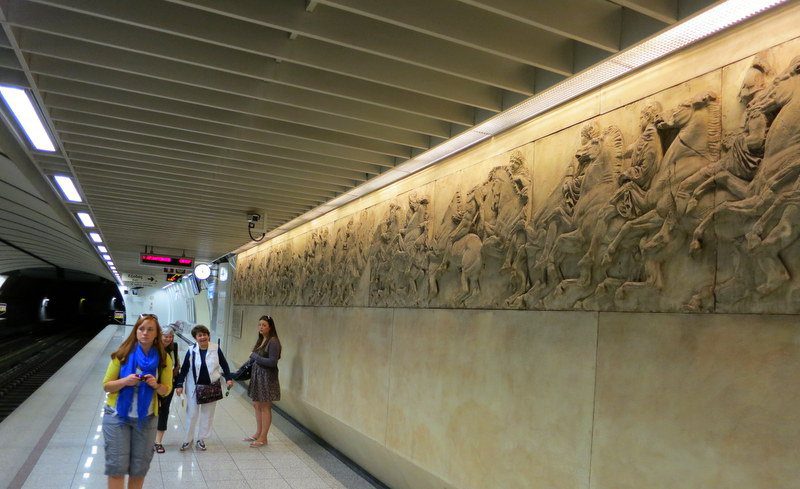 Just look at this photo to the right of the Acropolis subway station in Athens. Its upper section boasts glass cases of ancient artifacts like vases, toys, and looms, and its lower walls ripple with replicas of the friezes from the Acropolis!

“When you have a civilization this old,” laughed Mara, you dig anywhere– like to create a subway system– and you’re bound to hit an ancient settlement full of artifacts.”

In Boston, the only thing I’ve found from digging was an old Coke bottle!

Thanks so much for sharing this beautiful photos and for your articles. I have been in Greece and Turkey more than once, every time you visit those historical places you learn more. Your pictures are nice. Julio

Thanks so much, Julio! Keep on traveling!

Loved your post! I am thinking of taking my kids to Greece. They are 9 and 11 and LOVE Greek mythology. Do you have any suggestions of tour guides and/or cities/towns we MUST go? Thanks!

My fiancÃ© and I are chaperoning a group of high school students on a Greek Mythology educational trip in March 2016. Unfortunately I've been reading that March is not an ideal time to go to Greece. Ugh. Could you share the tour company you went through and/or cities/towns included in your tour? I have a stack of 6 books on Greece and a few locations, however, to me word of mouth is better than any tour book.

I realize your trip was a few years ago, hopefully you still have recommendations!

Yay! Here are all the places we went: https://aroundtheworldl.mystagingwebsite.com/category/locations/greece/ . Honestly, I think you can't go wrong, though Delphi was particularly magical. Greece far exceeded my expectations everywhere we went, and my expectations were high. Have a wonderful time!

I wish our subway systems had all of those cool designs on the walls. Theirs is all fancyh while ours is all dirty.

How long did it take to built that beautiful train station?

The train station is amazing! Everything in Greece is so fancy. :o