“Folly Beach, SC is Calling!” read the subject line of the message that popped onto my screen from the South Carolina tourism board. I read the email subject line again, muttering, “Folly WHAT?“

Images of 1907 Ziegfeld Follies dancers doing vaudeville by the ocean fluttered through my brain. I clicked open the message to reveal an invitation. Would I like to be in a tourism video featuring that island, conveniently located next to historic Charleston, SC?

Why, yes! Yes indeed, I would!

The fact that I hadn’t heard of Folly Beach before the invitation was alluring.

I’m drawn lately to the lesser-known spots. Times Square has already been photographed fully… but the lesser-known Folly Beach pier? Now that’s refreshing and different — especially for New Englanders like me who live a world away.

As I began posting of my plans to visit Folly, however, a surprise emerged: Numerous friends had already been to the island, and loved it.

Some South Carolina beaches are better for kids than others…

“We were just at Folly Beach with our kids, and had the best time,” gushed my manly friend Aaron (who will be furious to see the word “gushed” near his name). “It’s such a friendly, low-key spot, and the beach is shallow for the little ones. Ideal family travel spot.”

I grew even more intrigued.

Friday rolled around, and I taught my fifth and final 7th grade English class for the day, then raced to the airport to take off for Charleston, South Carolina. (Such a glamorous feeling to teach middle school with a purple suitcase next to your desk!)

Fellow travel blogger (and all-around fabulous woman) Roni the Travel Guru was there to greet me at the Charleston airport. Together, we were starring in the video shoot for the weekend. Couldn’t have asked for a better on-screen partner! (And yes, you, too, can get Roni’s “Feeling Beachy” shirt — among others that she makes — right here.)

Our weekend at Folly Beach was a sweet shift from city life. Despite being a mere 20 minute drive from Charleston, SC (which in turn is a direct 2-hour flight from Boston), Folly felt like vacation.

Though there’s a fun main street (character-filled shops and welcoming eateries), what really struck me about Folly Beach was how intertwined it is with nature.

Get this: We boated around the island, and became encircled by a leaping pod of DOLPHINS! Dolphins, I tell you!!! I didn’t even know that South Carolina had dolphins, let alone dozens of them that would nuzzle our boat.

Puttering a bit further out in Tideline Tours boat, Morris Island delighted us with its lighthouse, and soaring birds. The sand raced past in golden ribbons.

“This would be such a cool location for a wedding,” mused Roni.

Folly Beach Restaurants for your Tummy:

Back ashore on Folly Beach itself, the food and nightlife were a delight. Our #1 favorite dish (in a string of winning bites) was an oddity from the restaurant called Jack of Cups. Are you ready to hear what it was? Really? Ok: a STRAWBERRY SPRING ROLL, replete with goat cheese, mint, basil, cilantro, and vermicelli!

Just trust us. It sounds bizarre, but was… mmmm.

The menu at Jack of Cups reflects the culinary diversity of Folly: Roni had a scrumptious Thai Green Curry, while I feasted on a Mexican-Indian mix called “Verde Vindaloo.”

A tip about Jack of Cups: Because it’s one of the most coveted restaurants on the island, yet is about the size of a… cup, make a reservation ahead of time, and be prepared to wait.

Even though our March visit wasn’t during Folly’s high season, we still had to stand in line to get a table… but it was worth it!

Folly Beach is fabulous off-season, too!

Speaking of seasons, do consider visiting Folly Beach beyond the summer.

June through August, Folly is full of families and other vacationers, but the “off season” and shoulder season are relaxed and open. I’ve fallen in love with visiting spots during months when crowds are smaller.

Roni and I were in Folly during March, and were comfortable walking around with a light jacket, or no jacket (much better than blizzard-y Boston)… and the following weekend was in the 80s!

Dressing in layers is key for Folly packing for the non-summer months. For me, my favorite travel dresses (yes, from my friend Sarah’s company, Leota) with leggings and a fleece were ideal.

Which other Spots in Folly Beach were Yummy?

We adored our breakfast at Lost Dog Café: Biscuits with gravy for me (that I still dream about), and a crab cake eggs Benedict for Roni (which I lusted heartily after).

Casual and welcoming Sunset Cay was great for drinks during the spectacular Folly sunset. (I suppose you might have surmised that from the name.)

Finally, for a friendly, frolicking night out, Surf Bar was sure the spot to be!

If you want to talk about character, though, Chico Feo is your place. Chico Feo epitomizes the friendly, creative, global-village-loving Hippie vibe I so enjoyed around Folly. Just read the menu’s description of my dish, pictured above:

“Cuban Beans: Soft and pillowy white rice smothered by the velvet embrace of a perfectly cooked black bean. The stuff of Che’s conviction and Fidel’s logic, these two ingredients wrestle each other in a cosmic bachata. Adorned with the regalia benefitting heroes, tomatoes, red onion, and cilantro crown these kings.”

Amazing, right? But it just gets better. Here’s the menu write-up for Roni’s chicken tacos.

“Pollo Tacos: Our chicken is seduced into a pot filled with lime, thyme, and promises, and slowly simmered til ready. Topped with finely shredded cabbage, Trini sauce, house made salsa and whatever is topical to the day.”

Seduced with lime, thyme and promises?! I haven’t seen such an epic menu since a certain famed hotel in Belize.

Roni and I were at the most landmark hotel of the island: (note: Some links here are affiliates that provide a small commission at no extra cost to you.) Tides Folly Beach, which offers lots of rooms and amenities, and is centrally located at the main pier.

If I were to come back with my family (wait… WHEN I come back), renting a cottage would rock. Vrbo (formerly called VRBO) has excellent and affordable options, and the official Visit Folly site has a useful “where to stay” directory with a whole section on rentals. We passed cute-as-heck beach houses on our wanders, and the 24-7 grocery store in the center of town means that self-catering would be easy with the kitchen access a cottage provides.

Is this one of the Charleston, SC beaches that appeals to YOU?

Have you been to Folly Beach before? Other South Carolina Beaches? How was it? If you haven’t been, does it seem like your kind of spot? Do share!

Update: The Folly Beach tourism video is out! Click to see it!

I was a guest of Visit Folly during our stay, but all funny lighthouse poses and opinions are my own.

For other family-friendly ocean vacations, check out my article on Anna Maria Island beaches in Florida. 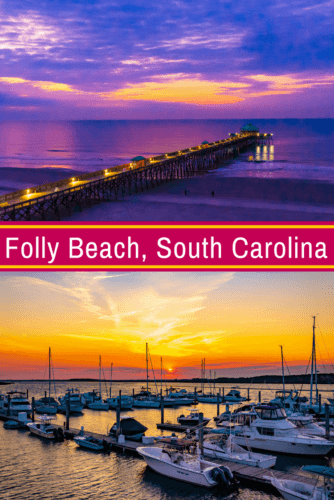 Love that lighthouse view! I never saw a lighthouse ever. This is a perfect place for me to travel when the world goes back to normal. Thank you for sharing!

I do hope you get to see a lighthouse soon!

Would love to visit this place someday.

These 10 Reasons You Should Visit Folly Beach will make you want to go!

[…] your next choice. I spent 3 glorious days and 2 nights in Folly Beach with one of my blogger boos, Lillie, who was the ideal traveling companion.  Here are 10 reasons you need to visit Folly Beach, […]

The sunrises and sunsets at this place are beyond words! I saw the picture of the sunrise view from your hotel and went wow and I scrolled through the rest of the post, it just got better. Folly Beach looks like a really cool place to spend a weekend at, I love the quirky architecture, the food seems amazing and the views are gorgeous!

Man, how I envy you your invitation to visit Folly Beach. This really is my kind of weekend breakaway. That’s a pretty long pier from where to watch those beautiful sunsets. I also love the quirky architecture all over the island. Oh, and you and Roni the Travel Guru make a great pair of actors!