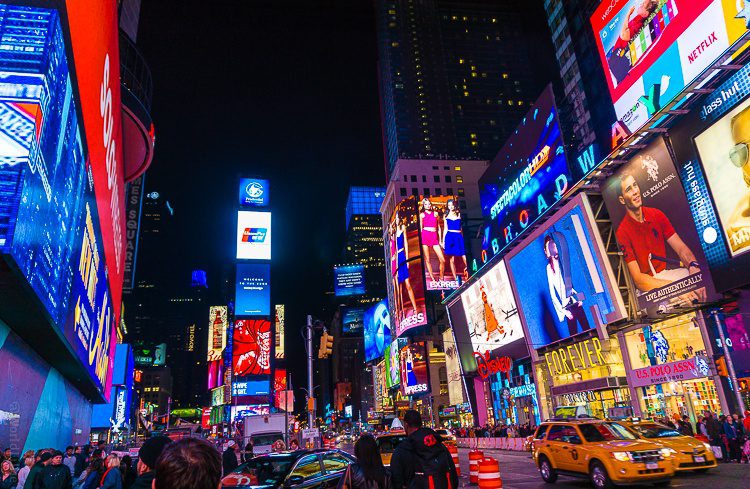 Look at all these people out in Times Square on a Sunday at midnight!

It was midnight, I was walking alone through Times Square, New York, and all was right with the world.

What brought me there this week? My husband, baby, and I have been traveling in Manhattan for vacation, and on Sunday, I was afforded a solo night out to meet up with my travel blog mentor. When dinner was over, I decided to walk the 50 blocks back to where we were staying.

You can guess where I ended up! The lights of Times Square have a magnetic pull… 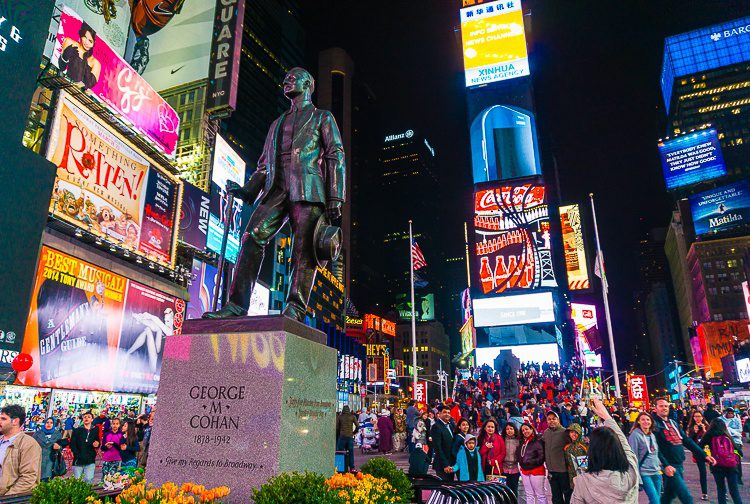 Much to my surprise, several thousand other people had the same idea to be out on that random Sunday night. Times Square was packed! What’s more, the folks out were all types and all ages.

Times Square has come a LONG way from the 1960s to ’80s, when it was known for danger and sordid activities. According to its official website, Times Square is now one of the most visited places in the world, with over 360,000 pedestrians daily — 66,000 between 7pm and 1am each night! 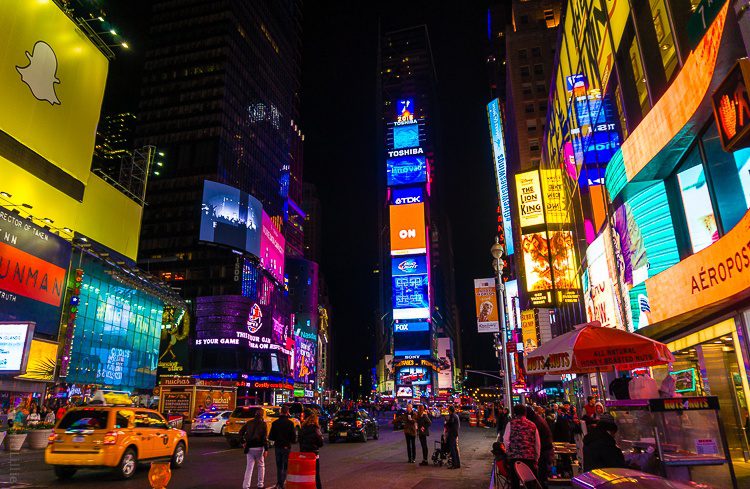 Just wait 30 seconds and all the advertisements change.

Normally I don’t take my camera out whilst alone at night, but gazing around Times Square, there were a hundred cameras flashing within one sweep of my eyes. “Might as well join them!” I thought with happiness as I pulled out my camera and started snapping these photos. 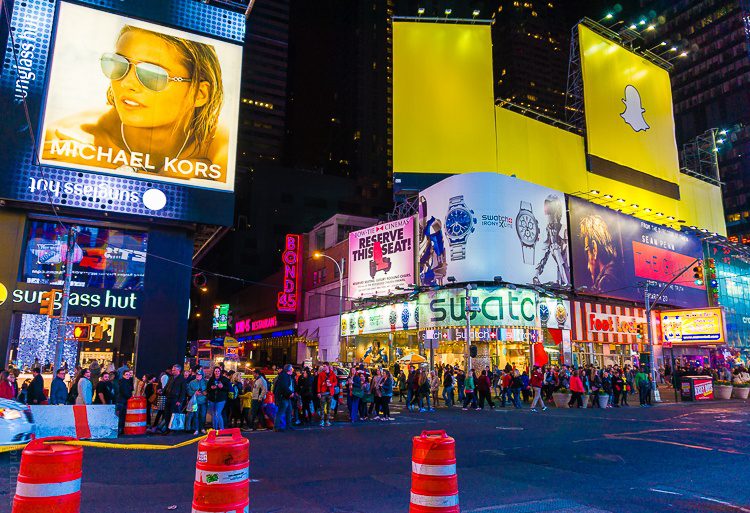 See the crowds of people? It’s hard not to love NYC!

So, what is the history of Times Square? Before the American Revolution, the area was a tranquil field with three small streams and was taken over by the Dutch. By 1870s, it became a hub for for the carriage industry, replete with horse stables. (Isn’t that a funny image to juxtapose with today’s bright neon signs?)

In 1904, Times Square got its name when the New York Times moved into a 42nd Street skyscraper. The first electric advertisement showed up later that year, in 1907 came the first New Years Eve ball drop… and the rest is a blaze of brightly-lit history!

According to Business Insider, it costs between $1.1 million and $4 million to advertise in Times Square for a year. That ain’t a bad deal when you calculate how many eyes see those signs! 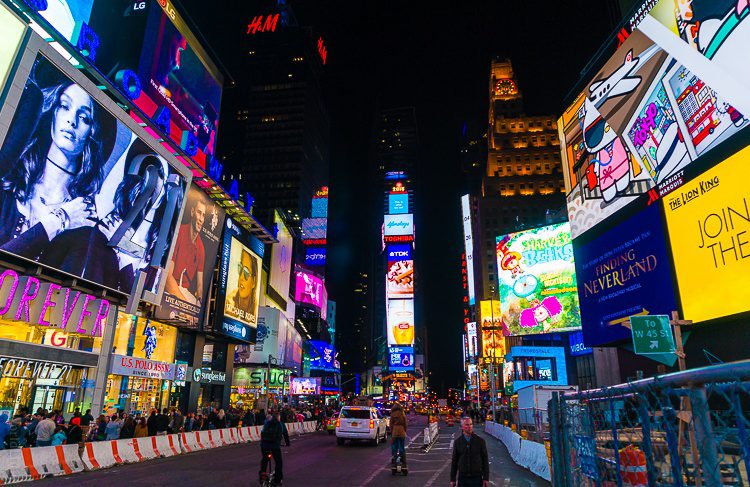 Wherever you look, Times Square is aglow.

New York City won me over that night this week when I took these photos, stirring me with its pounding energy and pulsing neon lights. Heaven knows I needed to be won over again.

I’d had a weird reentry to the city Sunday morning, having a MTA fare machine eat my $10 bill, then enduring a long train ride sitting next to someone screaming profanities for no apparent reason.

“New York,” I grumbled, “why must you be so loud, smelly, and in my face?! I could never, ever live here. Give me some room to breathe and think, you crazy city!” 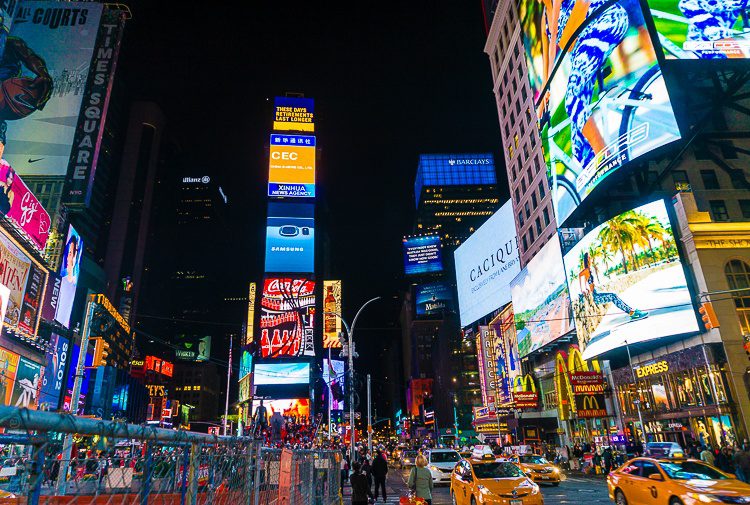 Even the construction zones of Times Square look pretty at night.

But all that was before I stepped back into Times Square that night. Funny that it took the most intense section of New York to make me love it again. “SLAM!” went the Times Square lights into my eyes, and as my breath was taken away, I remembered the first time I visited. 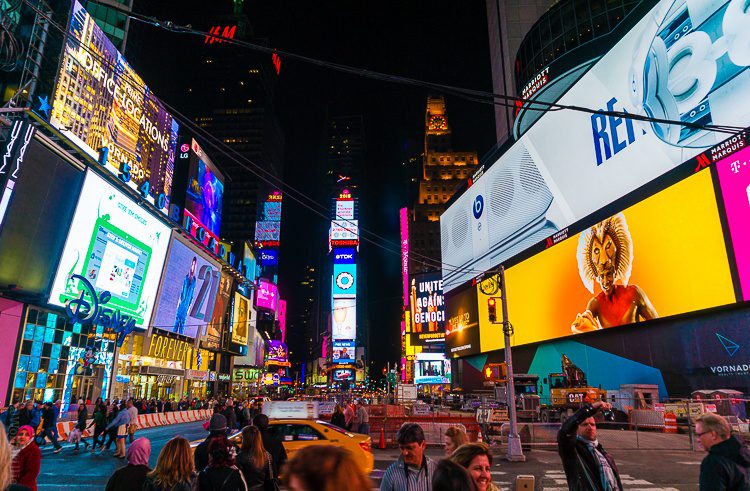 You can see why they call it “The Great White Way.” So bright!

I was fourteen and visiting a friend from camp. “You have to see Times Square at night,” she said, and led me up the steps of the subway. The doors opened, and my brain shut down.

“Is it daytime?” asked my brain. “No, it’s night. But it’s daytime-level light! What the –“ I had a panic attack, started crying, and had to be dragged back to safety. Embarrassing! 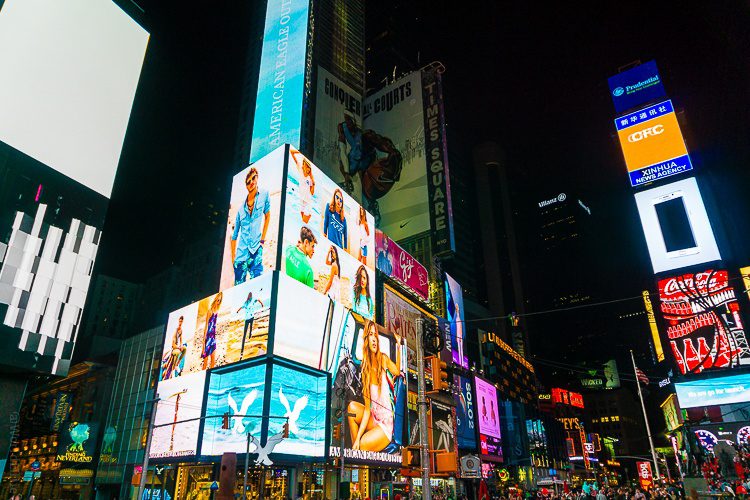 How things have changed now that I’m 33 and have traveled the world! It was actually nice to be back in this epic epicenter at midnight this past Sunday, alone but not alone… calm and happy as the city swirled its lights and commerce around me. Heart pounding, breathless, and satisfied, I headed back to my family with a big smile on my face. 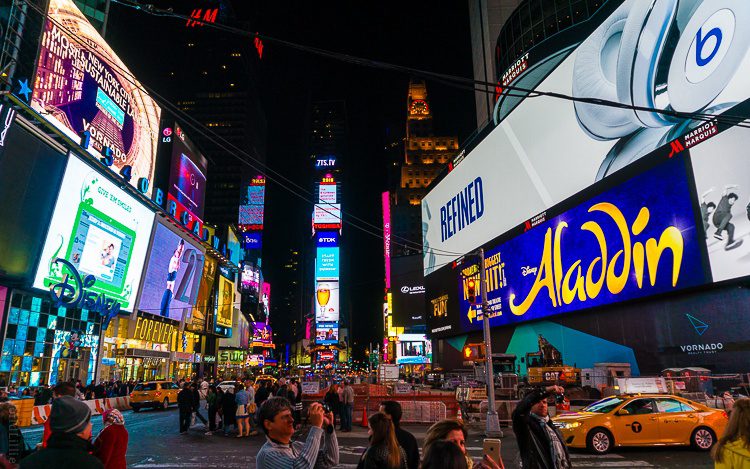 Do YOU love Times Square?

So what about you? Do you love Times Square? The hustle and bustle of New York City? Do share!

If this spot has your imagination fired up, check out my giant list of 40 places around the world — including this one — for art and drawing inspiration.

Save hundreds on NYC sightseeing:

The above link is an affiliate which provides a small commission at no extra cost to you.

I haven't been there in so long. I loved Broadway absolutely loved it. Now I want to go!

The excitement is palpable. Your photographs do a great job of communicating what it's like to be standing in the middle of Times Square, feeling exceedingly small next to those towering buildings and electric billboards. My photos of Times Square are never so sharp. Do you mind sharing your secret for capturing the scene with such clarity? Kind of camera, method used by the crack photographer...

Thanks, Arlis! I love my new camera so much that I've put a link to it at the end of a few of my articles. Scroll to the bottom of this one to see it: https://aroundtheworldl.mystagingwebsite.com/2011/08/13/what-to-expect-on-a-flight-from-the-u-s-to-china/ . Happy photographing!

Wow! What stunning colours. Photos like this make all the difference to an article. Hope you and the family are well. E xx

So beautiful. Indeed, for that sight, I would walk 50 blocks as well. Never been there yet, but it's definitely in my bucket list, especially for New Year's Eve! :p

It will take your breath away when you go. As for New Year's, I love bustle but I think that would be too much for me there.

Don't you know the city never sleeps?? ;) Loved this post and the superb photography ablaze in neon at Midnight! How wonderful!! Makes me miss NYC so much more now, thanks. ;) Also, enjoyed the historical perspective as well! Such a great read!

Thanks! I always aim to get that teaching bit in there...