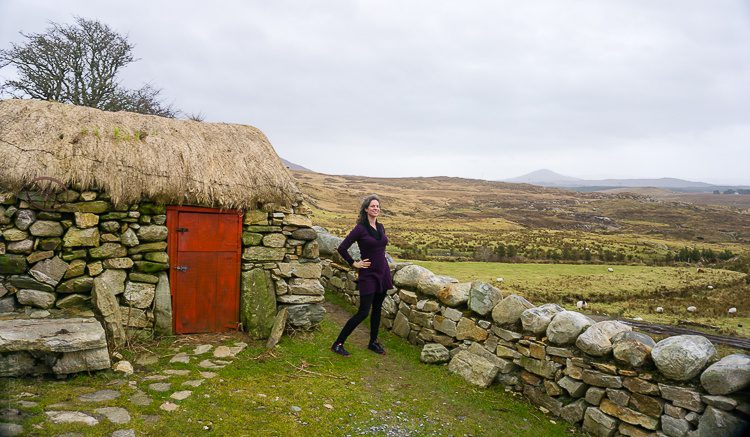 The Dan O’Hara Homestead at the Connemara Heritage Centre is not to be missed.

Sometimes the best tourist attractions are the ones you least expect. My husband, baby, and I were on day three of our Ireland road trip, and as our car rumbled up the path from Clifden to the Connemara Heritage and History Centre of Ireland, I tried to figure out what the heck this “Centre” even was.

“I think this is some guy’s house or something?” I muttered to my husband, Colin, shuffling through print-outs of our itinerary. “It’s something about a guy named Dan O’Hara. Why does everyone rave about this place, though? It just looks like some big hill. Let’s pop in for a few minutes then head out.”

Little did we realize that the hours we would end up spending at the Connemara Heritage Centre would be some of the best of our whole trip. 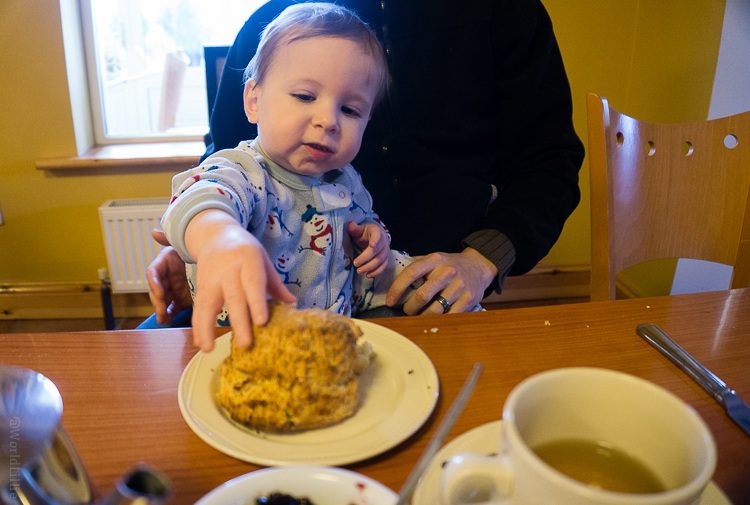 We were treated to hot tea and scones upon arrival. Yum!

The greatness started with food and a smile. A woman named Paula emerged from the main building as we parked, grinning warmly and informing us that she had baked fresh scones for us, and a pot of tea was brewing inside.

Our road-weary bodies perked up as we shuffled inside. Yum, were those scones great! I could tell already that this was no boring museum to soullessly pop in and out of. The Connemara Heritage Centre has soul. 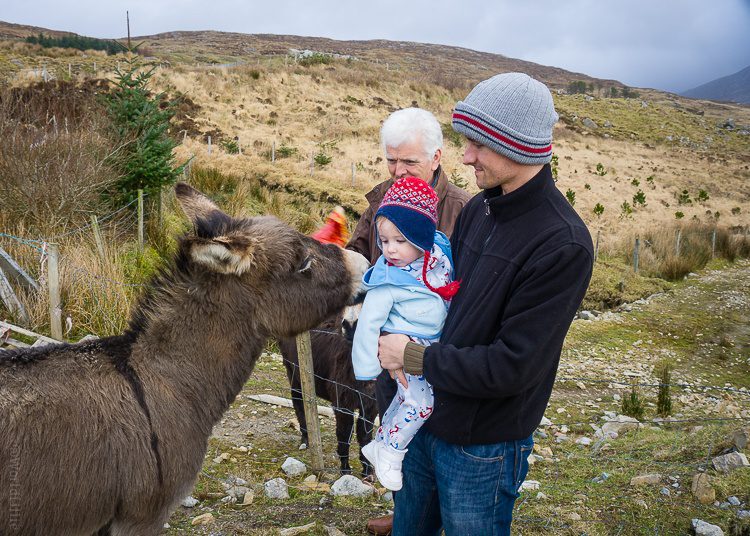 The Heritage Centre is also a working farm. The donkey loved the baby!

What IS the Connemara Heritage Centre?

As steam from the tea billowed between us, Colin and I began to slowly uncoil from our frenetic Must-See-Everything tourist mode. We relaxed into the chat with Paula, learning about the history of the place.

“The Connemara Heritage Centre,” Paula told us, “is based around the restored pre-famine cottage of a farmer named Dan O’Hara who was forcibly evicted in the 1840s and migrated to America, as so many other Irish did around the time of the potato famine.” 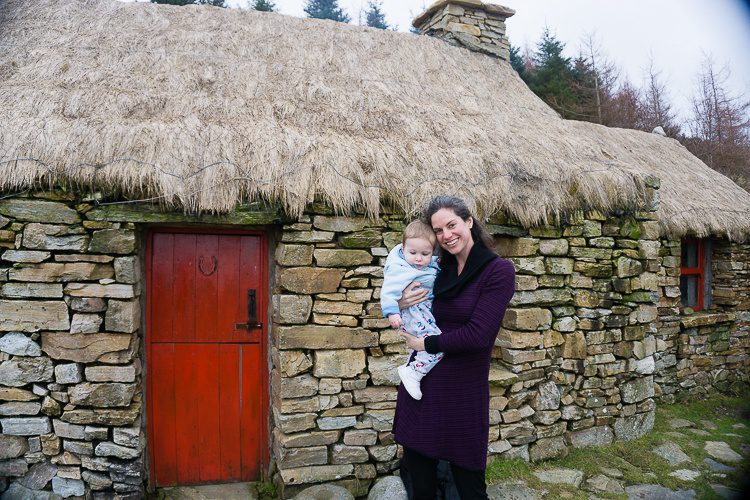 The famous red door of the Dan O’Hara Homestead.

Irish History, on a Working Farm

Paula explained that the Centre is a working farm that is now run by a couple named Martin and Nora. In 1992, the couple decided to diversify by offering a restaurant, inn, and tourist activities, too, such as turf cutting, sheep herding, carriage rides, soda bread making on an open fire, and immersive tours.

Shortly, Martin, himself, came in after tending the animals, washing soil from his hands so he could join us for scones and discussion before leading us up the hill for a lively tour of the homestead. Much to our delight, this tour included meeting the animals! Devi sort of liked when the donkey tried to kiss him, but mostly freaked out. 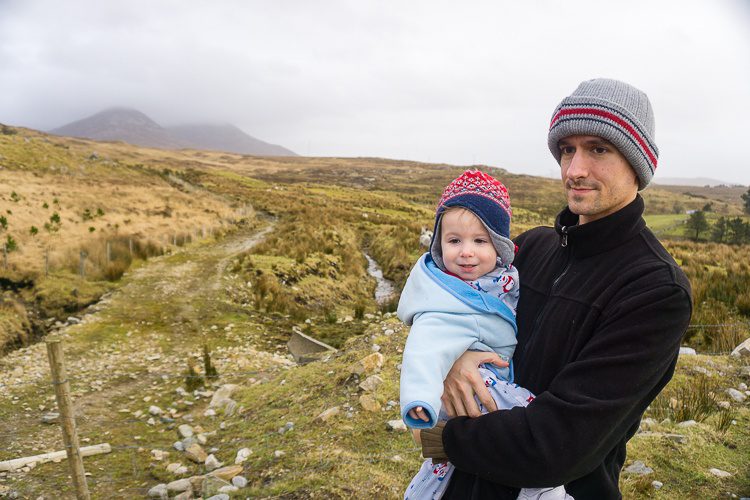 The iconic landscape of Connemara, Ireland!

The Tale of Dan O’Hara

Once we were inside the Dan O’Hara house, Martin went straight to the fireplace to light a turf fire. Turf creates a special kind of flame, and is ubiquitous in Ireland.

Martin settled into the old wooden chair and began to tell the tragic tale of Dan O’Hara. Turf smoke made the room thick and misty as the story poured from Martin’s mouth, weaving images in my mind. 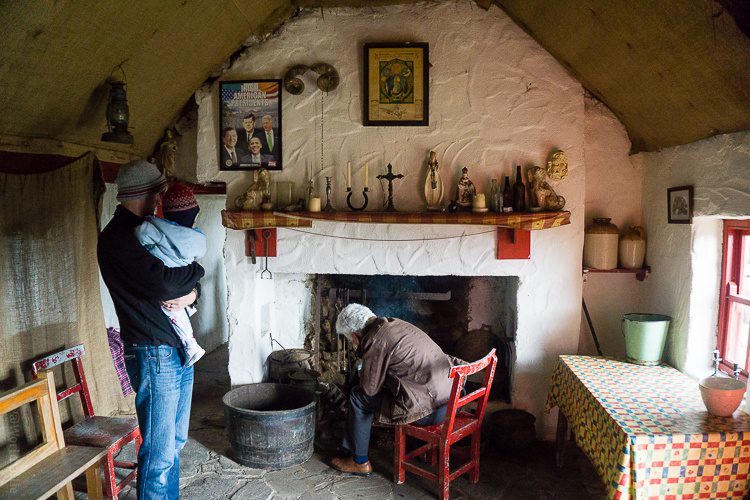 Inside the Dan O’Hara house, our guide made a fire. See the picture of U.S. presidents?

In the 1800s, Martin explained, Dan O’Hara lived happily with this wife and seven children on land he rented from the local landlord. He ran a robust farm which revolved around potatoes.

Alas, in the 1840s, the landlord drastically increased the rent, justifying it by saying an increase was necessary because O’Hara widened his cottage windows. Dan O’Hara couldn’t pay, and thus was brutally kicked out of his home. 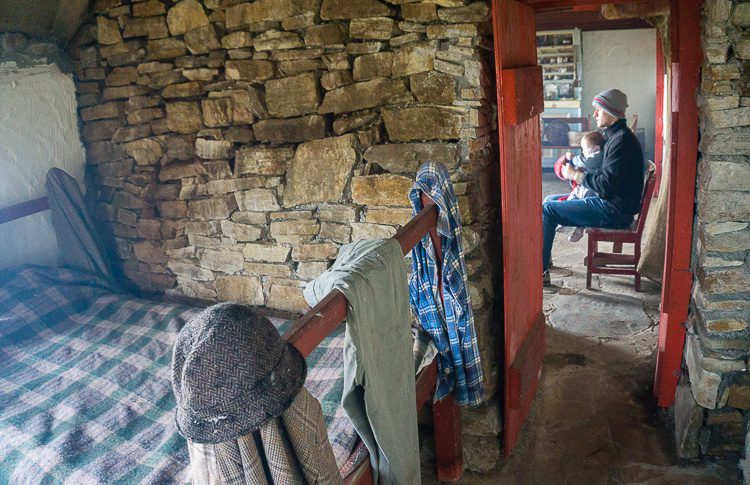 Peeking at Colin and Devi from the small, smoky bedroom of the Dan O’Hara house.

Migration from Ireland to New York

Like so many Irish folks before and after him, O’Hara and his family set sail across the Atlantic Ocean (visible from the doorway of the cottage) to New York. Tragically, only Dan and four of his children survived the journey.

Legend has it that O’Hara arrived in New York, dejected and penniless, and took to selling matches on the streets of New York to survive. 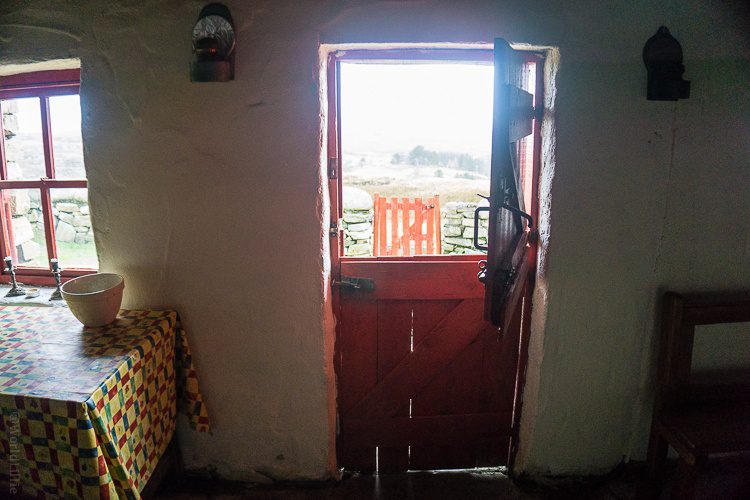 The beautiful Dan O’Hara Homestead door from the inside.

The Ballad of Dan O’Hara

Here is a verse of the well-known ballad of Dan O’Hara:

“…Poor I am today, for God gave and took away, and left without a home poor Dan O’Hara. With these matches in my hand, in the frost and snow I stand, so it’s here I am today, your brokenhearted.” 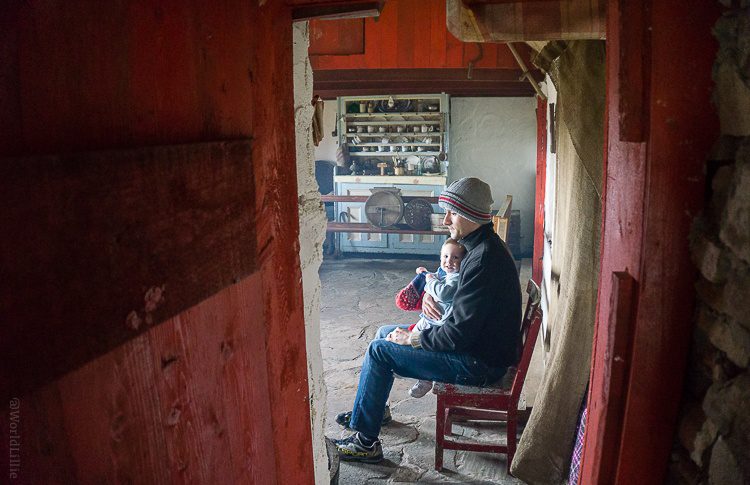 Devi’s smiling at you from behind the turf smoke!

Want to know the mark of an exceptional tour guide? Martin sang the ballad for us, the fire crackling with magic behind him as the room filled with his voice. We will remember that moment forever! Beautiful. 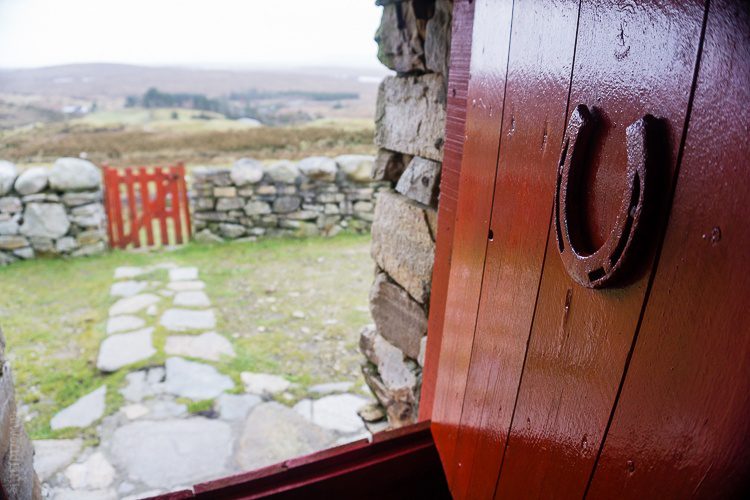 From his door, Dan O’Hara could see the ocean stretching to America.

As I gazed around the house, I felt foolish that I hadn’t heard of it before. Decorating the walls were pictures of the U.S. presidents and mayors who had visited (each of whom had Irish ancestry I didn’t realize), and signs lined the paths of the homestead proclaiming the patronage of people near and far, including several Boston-based organizations! 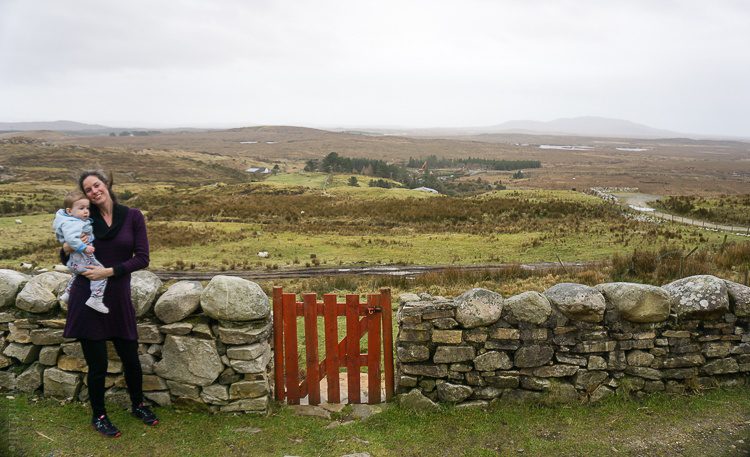 How far can YOU see? Can you make out New York?

HOW Many Irish People Settled in America?!?

I began to realize why the Connemara Heritage Centre is so special and important. The story of Dan O’Hara is symbolic of the 4.7 million Irish people who settled in America between 1820 and 1975 in search of a better life.

Standing on that hill of the Dan O’Hara Homestead and gazing out across the hills of Connemara to the Atlantic Ocean which separates you from America, you’re smacked with a pang of recognition for what these emigrants might have felt. 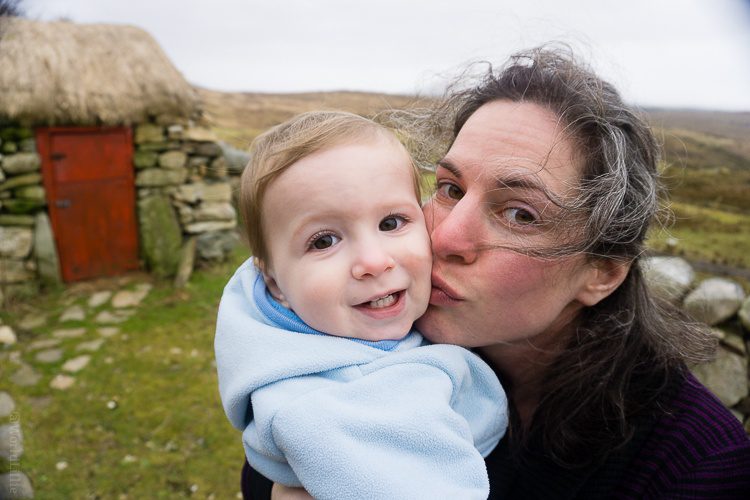 How Difficult to Emigrate from Home!

Did they feel anguish over leaving their cozy homes, and the soft green hills of the farm they knew so well? Did they feel excitement over what opportunities might await on the other side of the sea?

Did they feel fury at the people and circumstances that demanded the exodus? Standing with that famous red door behind your back, gazing at the horizon, you get a whiff of the emotions. 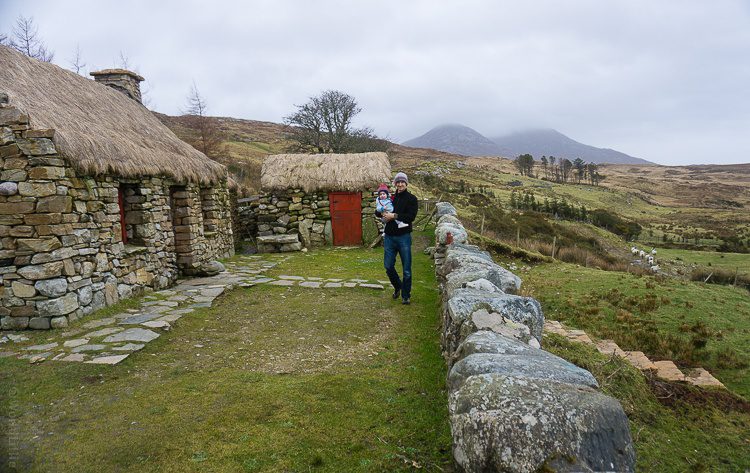 It must have been so hard for Dan O’Hara to leave this spot.

As the sun began to set, Colin and I trudged down the hill (with a brief stop to say goodbye to the donkey) to have another scone and talk some more with Paula and Martin.

We were endlessly thankful to finally have a chance to ask the questions that had been gnawing at us since our arrival in Ireland. Through Paula and Martin’s kind, open, and patient conversation, they let us into a whole other side of Ireland beyond the glossy tourist trail. They reconnected us with the humanity of the island. 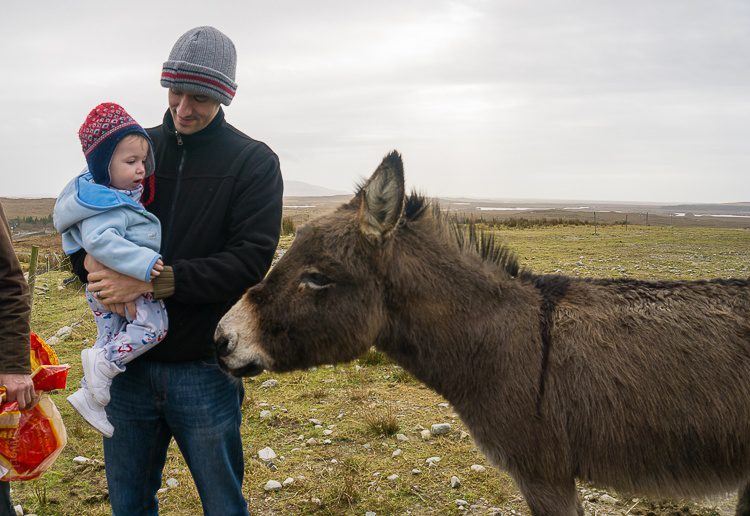 One last hello to the donkey before heading out.

Do Not Miss The Connemara Heritage Centre

Our family didn’t expect it before arriving, but it turned out that the Connemara Heritage Centre made just as powerful an impression on us as the famed Cliffs of Moher. If you’re in the area, do stop by… and eat a scone or three for us! 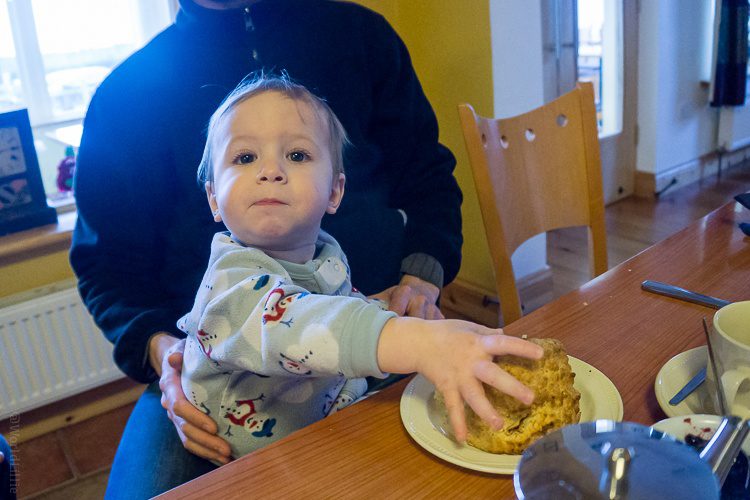 Another scone for the road, please!

Huge thanks to Tourism Ireland for suggesting we see the Connemara Heritage Centre, and as always, all opinions, donkey kisses, and fixation on food are my own.

Enjoy this article and still planning your trip? Click here for an easy affiliate link to Ireland hotel deals, and here for deals on Ireland rental cars, as it will give a small commission to help support this site at no cost to you. Happy travels!

went there in June with CIE coach tour and it was the best. went up in the little trolley and we also saw the Connemara ponies. do you know the story about those?

What a lovely and well written article. So glad you enjoyed your trip. Dan O'Hara's is indeed a little gem!

Come back when your little baby is a teenager and we'd be delighted to welcome you to the most unique summer camp in Ireland - www.connemaramathsacademy.com

Interesting! Thanks for sharing.

Everything about Connemara screams "quaint" - that donkey is precious. Looks like an unforgettable stop!

Your Ireland trip looks so wonderful. Can't wait to visit.

Pictures have made the place so exciting and inviting. :-)