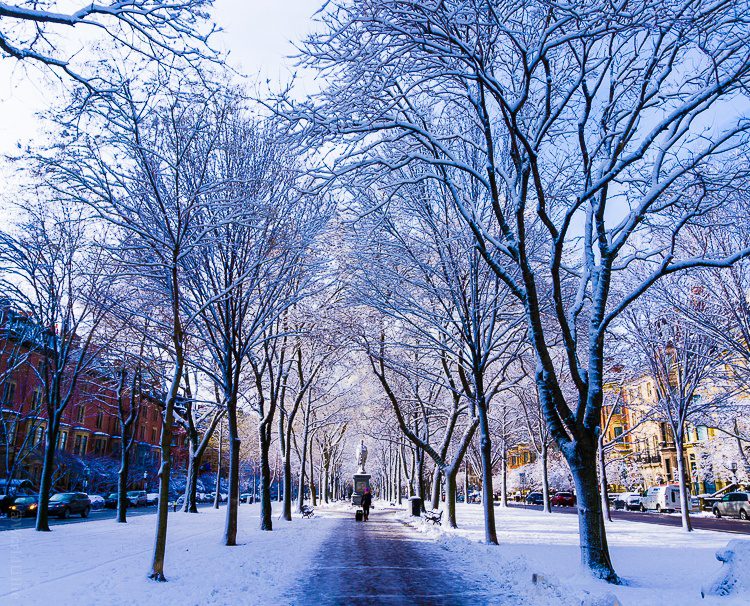 Boston can be so beautiful in winter!

“Should I visit Boston in winter?”

This is a question I get a lot from readers who know that this city is my beloved hometown. The answer is simple: the weather in Boston from October to April is a game of roulette. You can win big, or get slapped in the face! 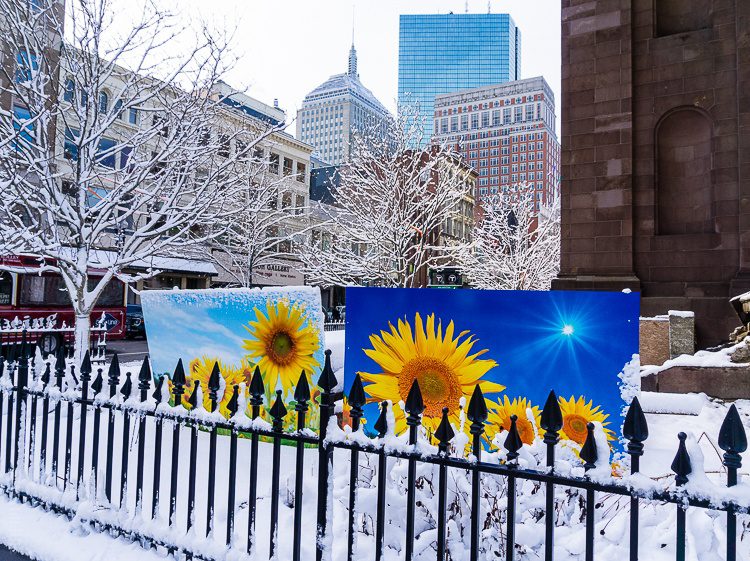 Public art of sunflowers near Copley Square contrasts with the snow.

Winter in Boston Can Be Great!

On one hand, you may luck out with your winter visit to Boston. It MAY be ridiculously warm and gorgeous here, making your tourism in “America’s Walking City” a breeze. This winter we’ve had two days in the 60s! 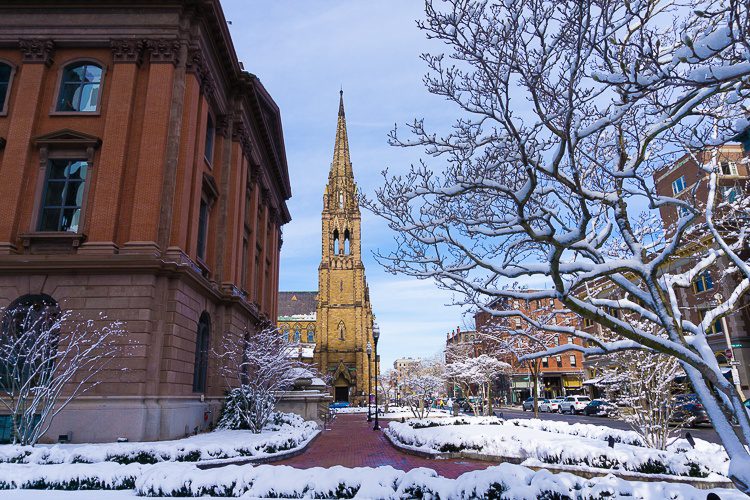 One of many pretty churches in Boston’s Back Bay neighborhood.

OR Boston Snow Can Wallop Us

The danger of traveling to Boston during our cold season, however, is clear for anyone who’s watched the news recently: We MAY get massive loads of snow without warning! These storms can cause your travel plans to be canceled, delayed, or generally thrown into a tailspin. 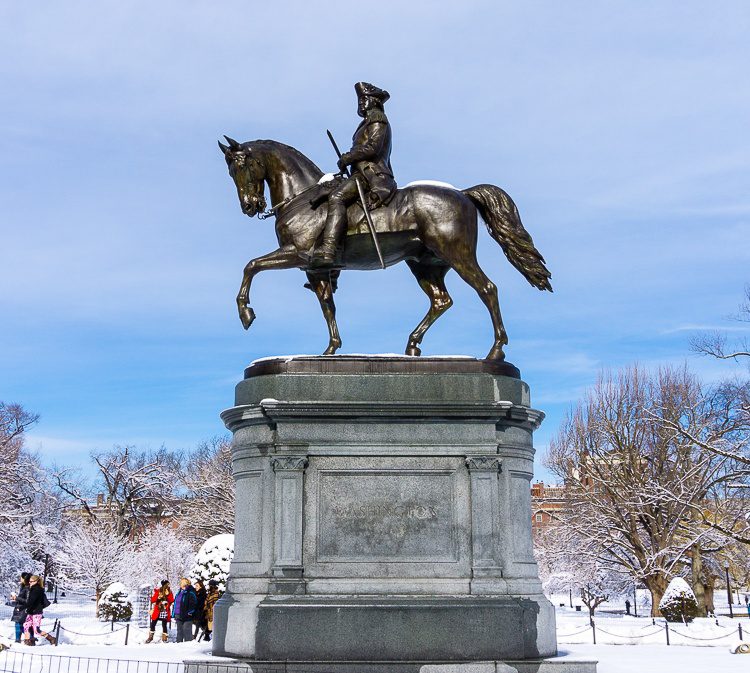 George Washington on Horseback in the Boston Public Garden.

Boston Can Get Major Blizzard Action

In 2015, we beat the all-time record for snow in Boston and achieved NINE FEET of the white stuff over the course of multiple back-to-back blizzards. That was insane, and undoubtably wreaked havoc on the travel plans of our city’s tourists, not to mention the lives of us locals! 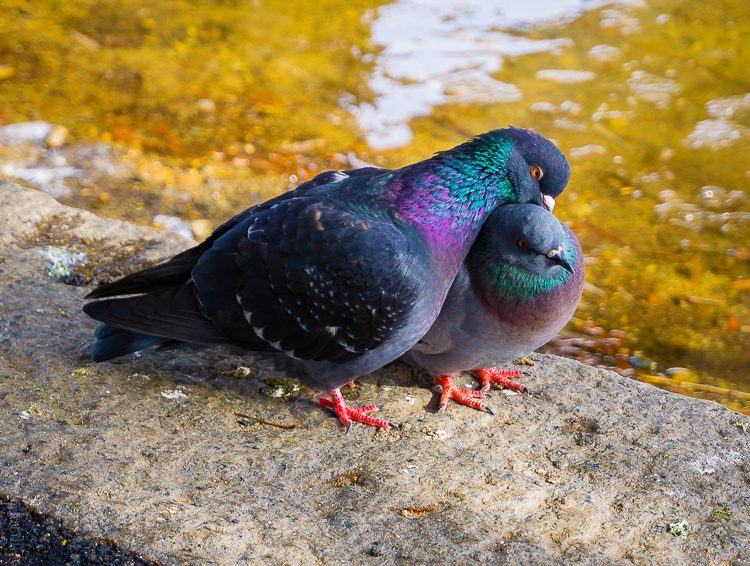 Pigeons huddled together for winter warmth.

But Some Years, Boston Gets Almost No Snow

In 2016, we only had one major blizzard, and that was cleared up quite quickly. Before the plows worked their magic, though, I was able to spend a day photographing Boston under that frosting. 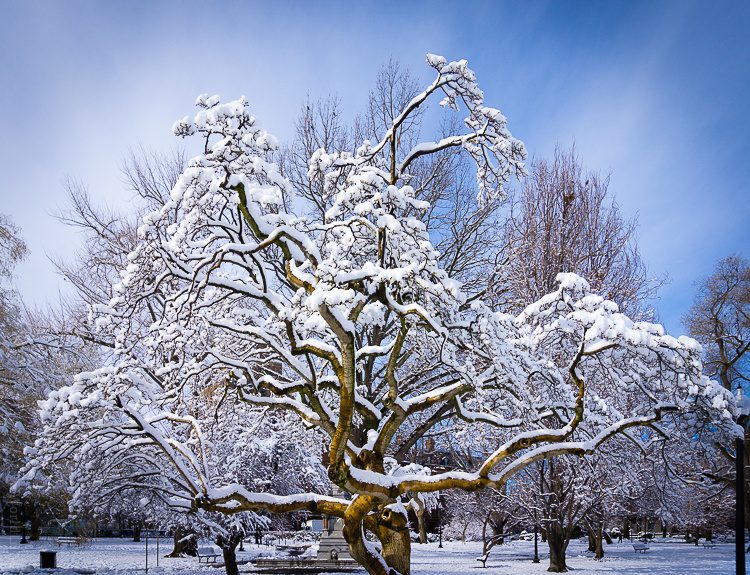 Boston is Beautiful in Winter Snow!

The resulting lovely photos are displayed here for your enjoyment, and these images reveal the other way you could luck out in winter travel here: You might get to see how pretty Boston is under a fresh blanket of snow! So what are the best places to gaze at this city in winter? Here is my suggestion for… 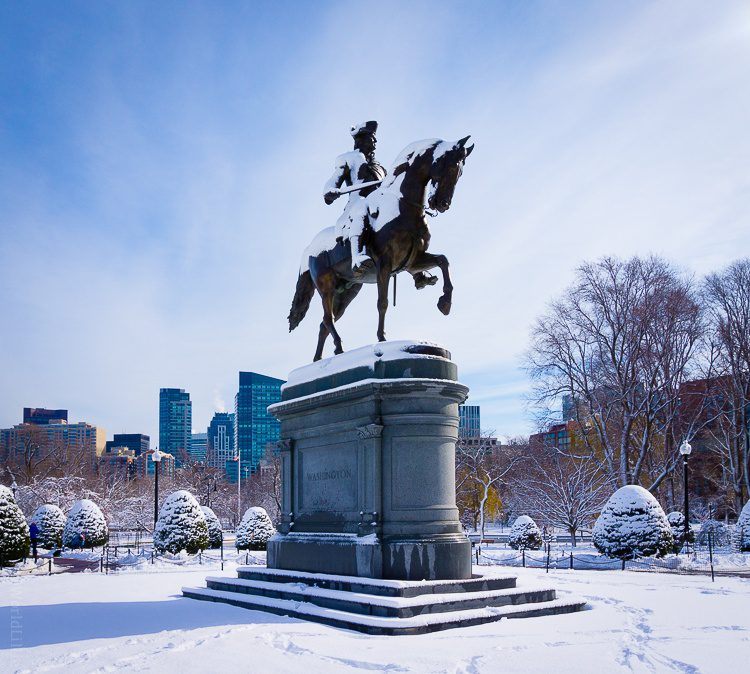 If your winter travel timing does work out fortuitously, I recommend you stroll through the following areas to see some of Boston’s prettiest spots. (Note: This walking tour itinerary is gorgeous in any season! I just took the photographs in winter this round.)

Begin at Copley Square (by the Copley stop on the Green Line and Back Bay station on the Orange Line MBTA trains). Pop into the stunning Copley Library, and admire the mirrored Hancock Building and how it reflects Trinity Church. 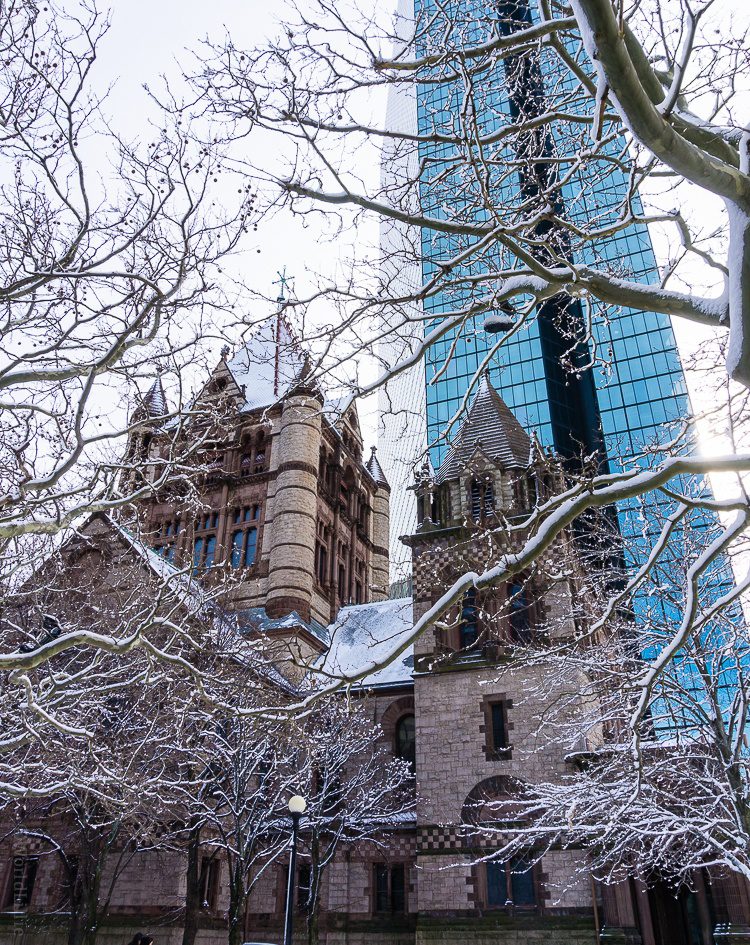 The Hancock Building and Trinity Church.

From there, walk northeast along Boylston Street (lots of fun shops) or Newbury Street (such European flair!) towards the Boston Public Garden. Now, during the summer, the Public Garden is known for its heavenly Swan Boats, Make Way For Duckling statues, and romantic marriage proposals. But is it worth a visit during the colder months? Yes! 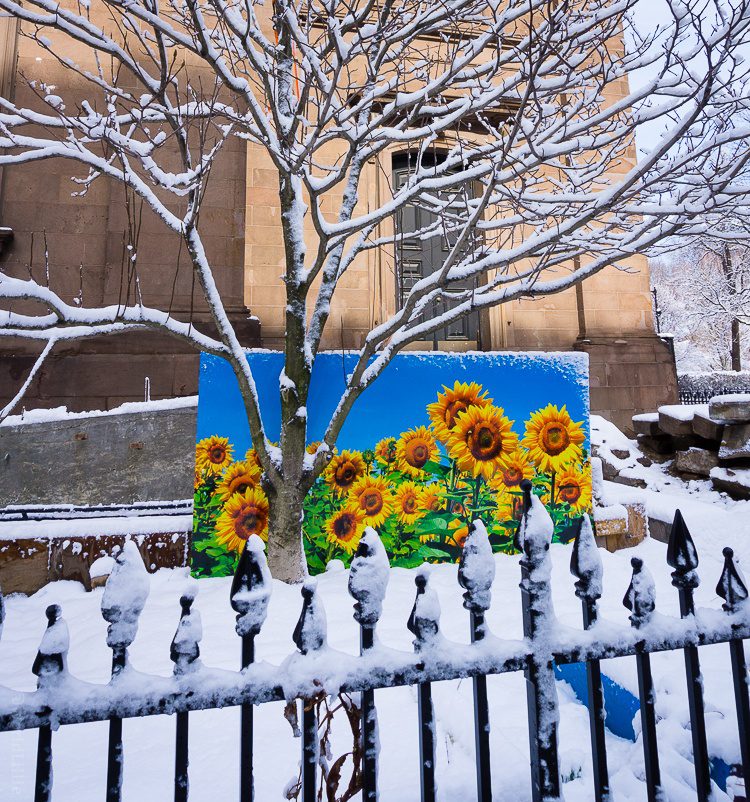 Sunflower art on Boylston Street across from the Public Garden.

During the winter, the Boston Public Garden is transformed into a wedding cake of white-laced willows and water. It’s a sight not to be missed if you’re lucky enough to have any time in Boston! (This is not to be confused with Boston Public Market, which is named as an homage to the park.) 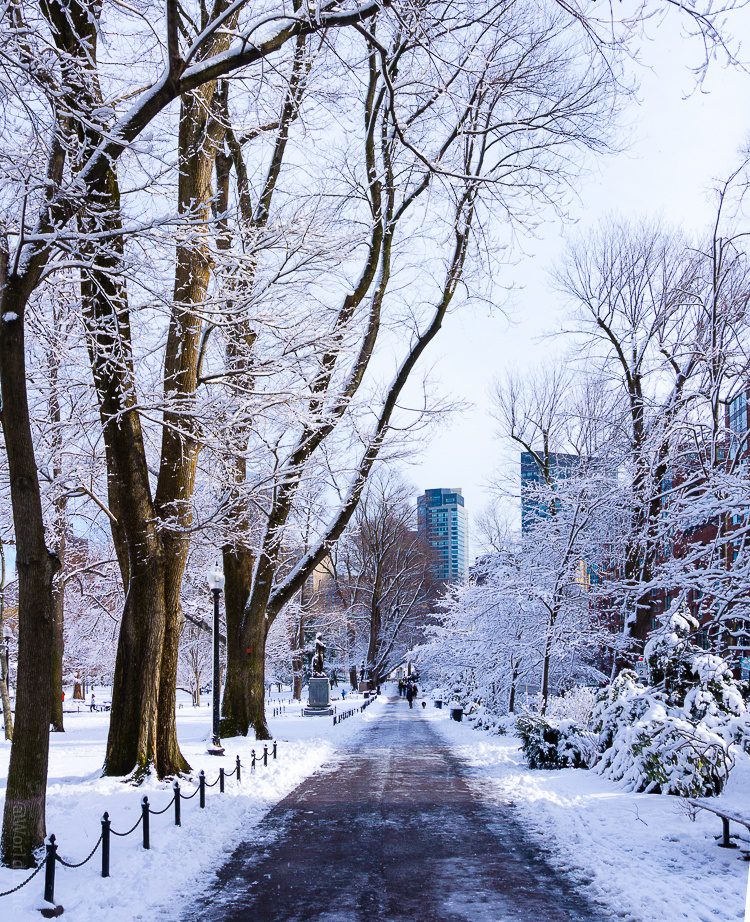 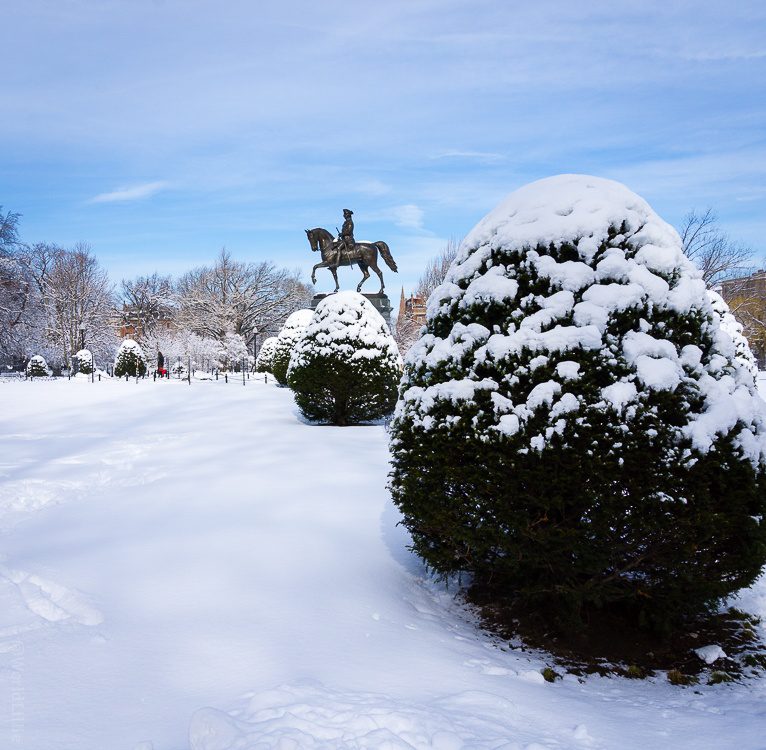 Washington on horseback welcomes you to the heart of Boston.

The Esplanade Along the Charles River

After wandering the Public Garden, head northwest on Arlington Street towards the Charles River. If you follow Arlington Street, it will take you on a pedestrian bridge over Storrow Drive and plop you safely on the gorgeous Charles River Esplanade: the garden park along the river! 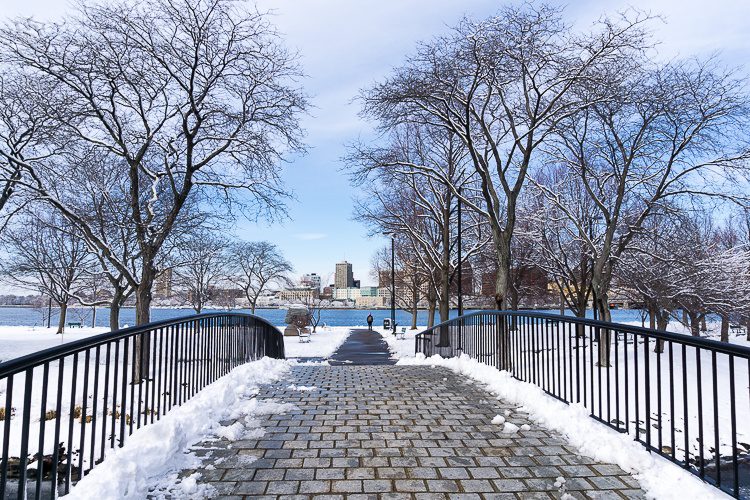 A graceful bridge on the Charles River Esplanade.

During colder months, the esplanade can be blustery and frigid as the wind whips off the water, but odds are just as good that the sun will be sparkling off the ice under a bright blue winter sky, and you’ll see some unforgettable scenery. 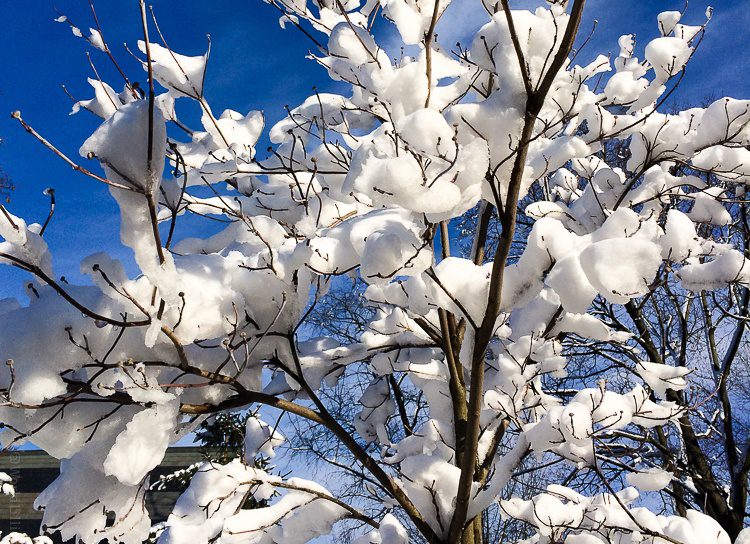 Doesn’t the snow on the tree look like yummy meringues or spring flowers? 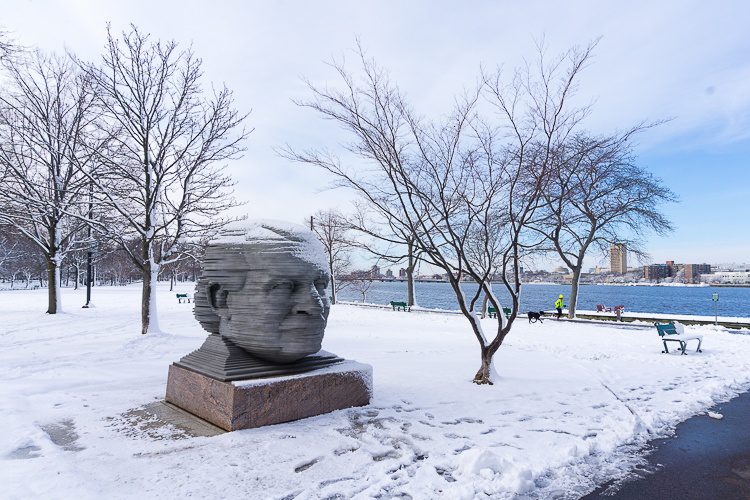 A head statue on Boston’s Esplanade.

When you’ve had your fill of the wintry water sights, head back over the bridge to Arlington Street and walk along the southwest border of the Public Garden until Arlington intersects with Commonwealth Avenue. 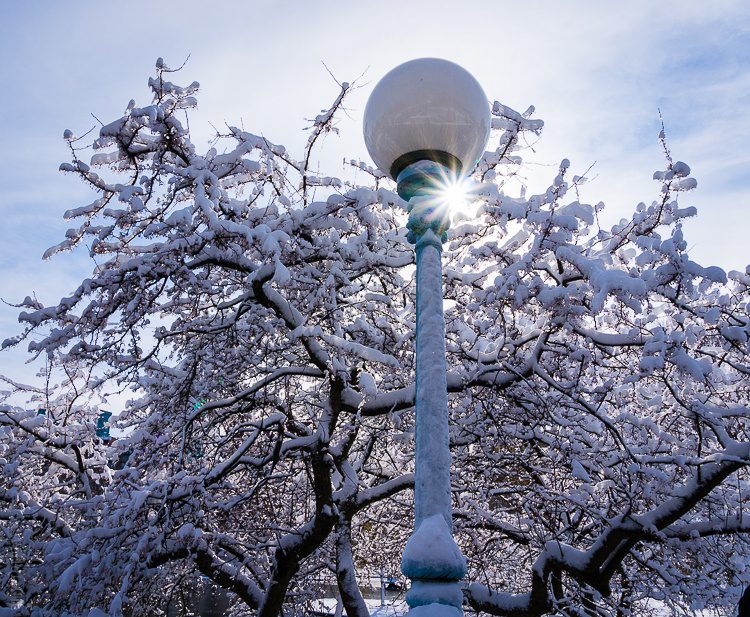 The Tree-Lined Strip of Commonwealth Ave.

Dear “Comm. Ave.” as it is called, is a classic Boston street with a wide green park running down the middle of the street. As you can see from the lead photo of this article, its towering trees look luscious in the snow! 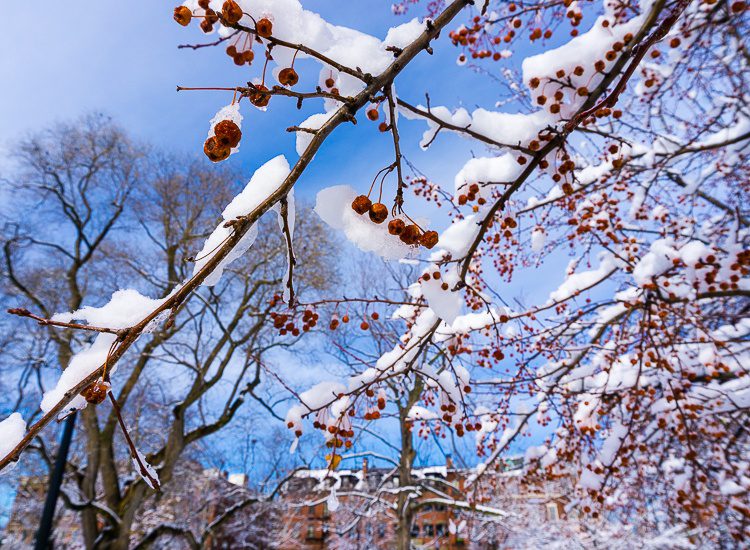 Winter berries and a blue sky.

All these photos show the beauty you can see along this route, so let’s take a moment to sit back and admire more of Boston in winter. 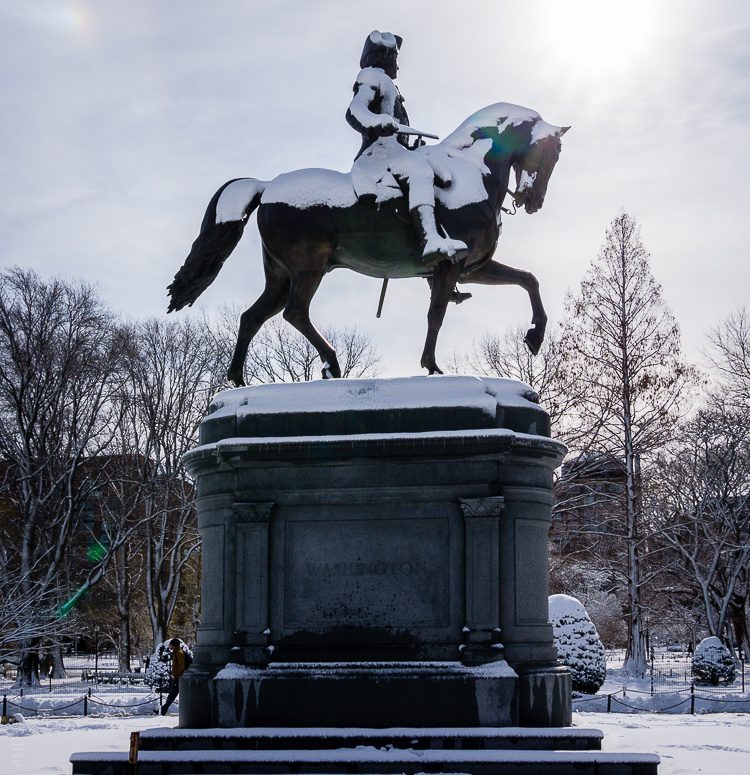 Such an iconic Boston statue. 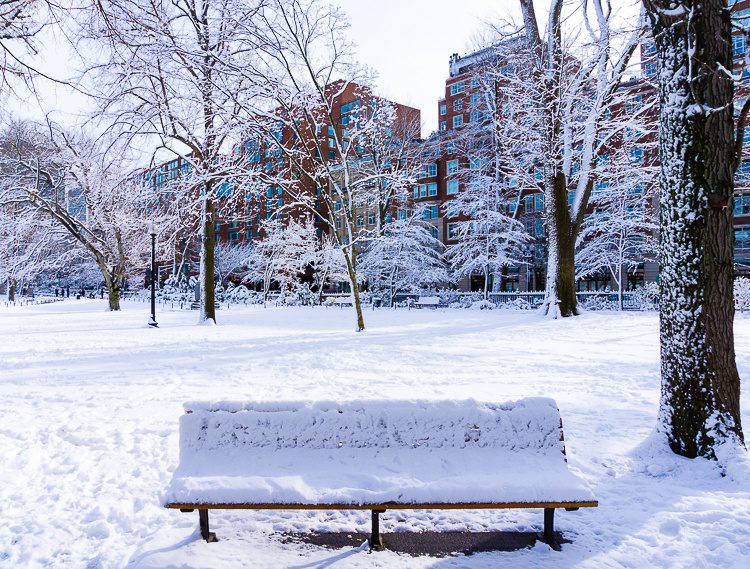 Want to take an icy seat?

See? Boston in Winter Can be Awesome!

Despite the risks of travel delays due to blizzards, I hope these photos make it clear why the odds are good that visiting Boston in winter is still worth it! Now I’m curious to hear from YOU. What’s your take on this fine city during our colder months? Do share! 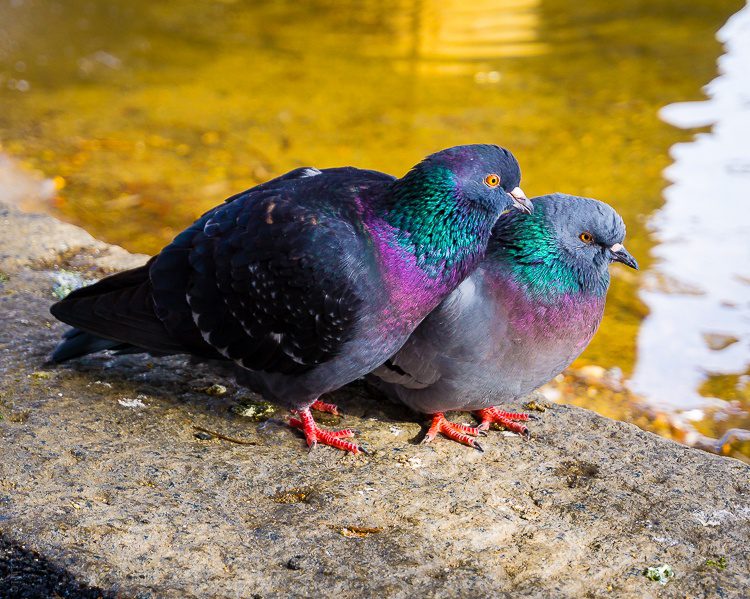 Another look at those shiny pigeons!

Save Money and Time on Your Boston Trip:

Use these affiliate links to plan travel and support this site at no extra cost to you! 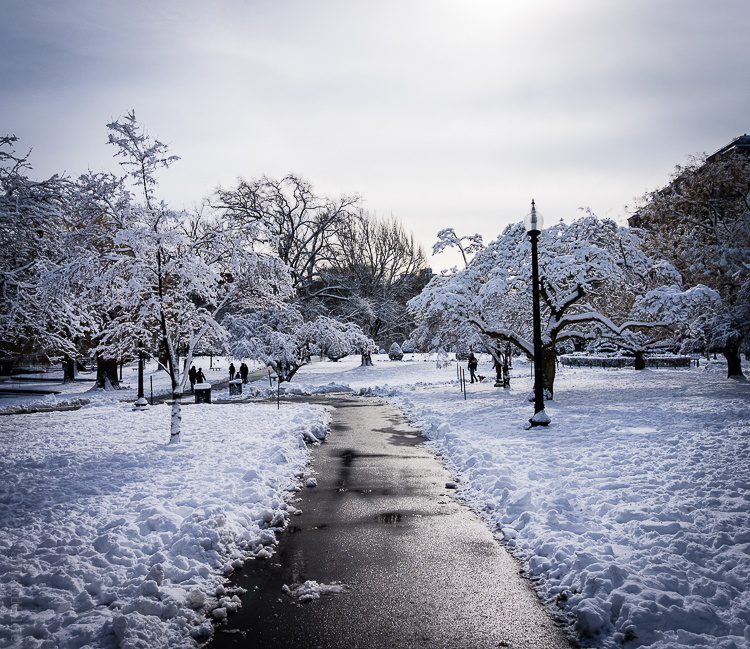 Hostels and Hotels in Boston:

Want more Boston beauty? See my round-up of Emerald Necklace Parks in the city. Any purchases through the affiliate links in this article support this site at no cost to you. Thank you!

What fantastic pictures! The city looks gorgeous in winter.

Thank you for this gorgeous blog. Makes you want to visit Boston.

Yay! That makes me very happy. It's a fabulous city to visit!

Stunning Pictures!!! Boston looks lovely, It gives me excellent enjoyment to look at these pictures and delight your excellent content here. I highly appreciate it.

I enjoyed reading about the virtues of visiting Boston in the winter from my warm home in Atlanta. The photos of the trees with snow look beautiful. Thanks for sharing the beauty of your hometown.

Beautiful pictures. Sometimes when you live here, you forget to notice how beautiful it is. I'm curious why you chose you call the Arthur Fielder head on the Esplanade a "head statue"

Thanks for your comment! You ask a good question about my title for the statue. I didn't realize who it was (just looked it up and see that Arthur Fielder was a long-time conductor of the Boston Pops Orchestra), but now I know. Thank you!