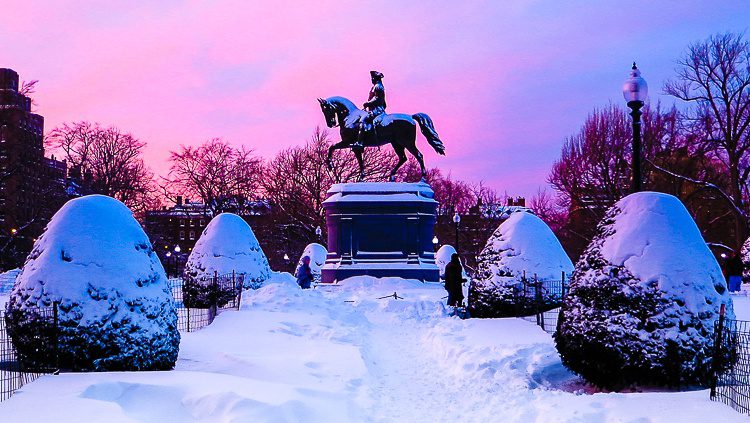 The Boston Public Garden was covered in two feet of frosting!

WOWZA did we have a lot of snow in Boston!

Two feet, to be exact. Raging winds whipped the wet, fat snow of Blizzard Nemo all over our city. Windows shook, the view was waves of white, and schools were closed for three days. Driving was banned, and travel ground to a halt. 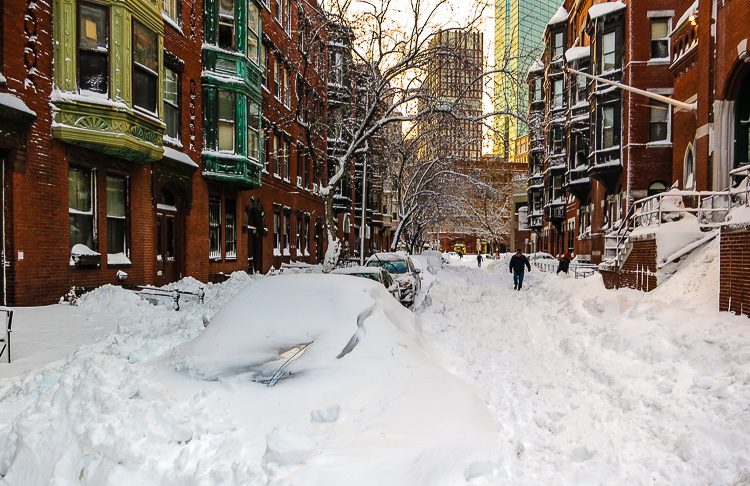 Blizzard snow smothered Boston’s streets and parked cars. Can you see the hood peeking out?

Being married to another teacher is splendid on a triple snow day like this. Colin and I ate tons of ice cream, watched five Bollywood movies (we’re addicted to them after travel to India), and rocked out fuzzy sweatpants. 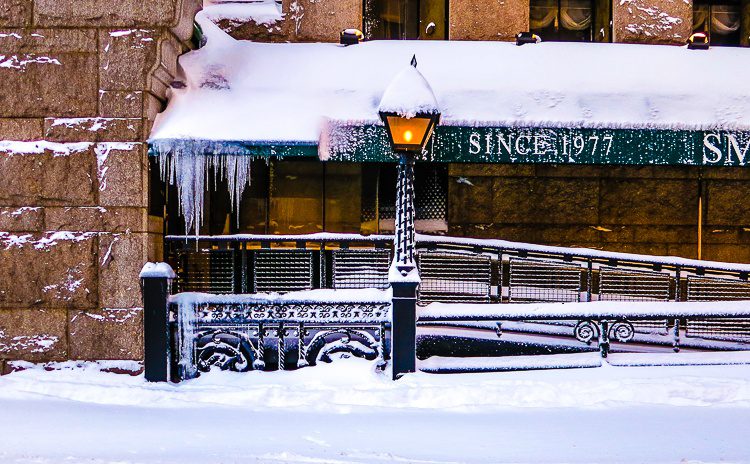 But at a certain point (er, day three) we figured we should probably get off our sweatpants-ed rumps and walk around the city to see what Nemo had done. We may or may not have kept our sweatpants on as we yanked up jeans and snow boots. 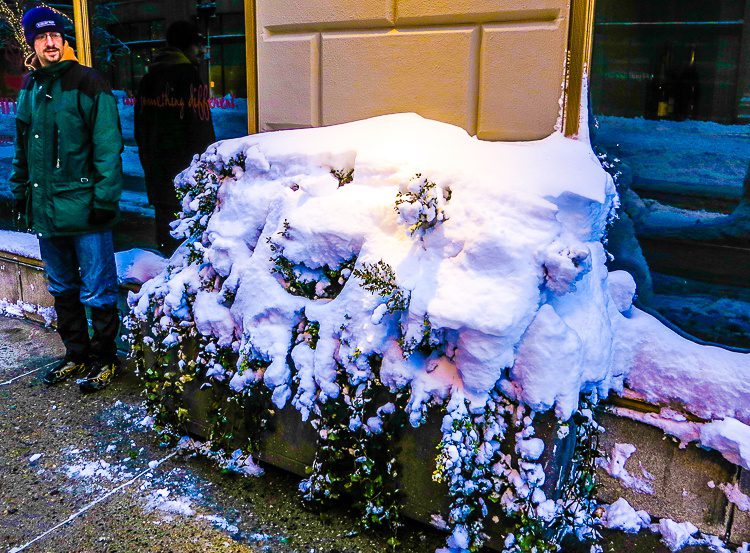 So, what had Nemo done to Boston? In a giant “BLOOP!” it had swaddled the entire city in frosting of epic proportions. Cars were invisible but for a glint of metal. Plows worked overtime, but many streets remained an impassible snow swamp. Stairways turned to frozen waterfalls, as if the doors had vomited white. 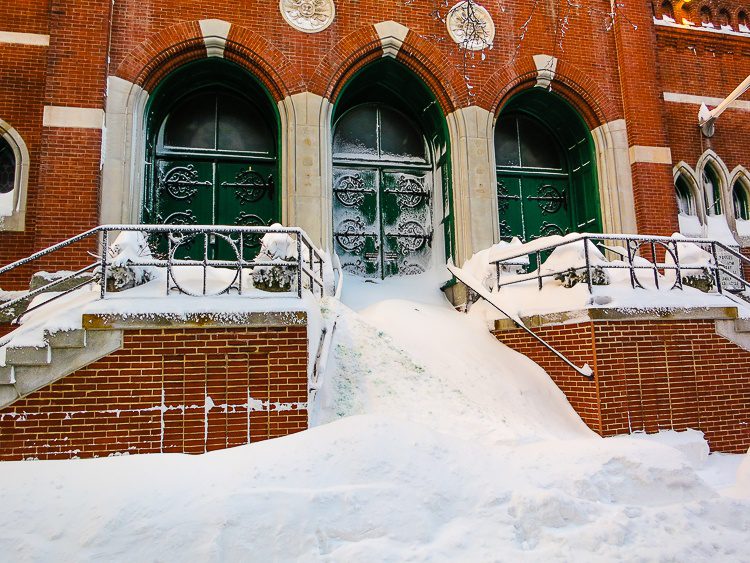 These church stairs looked like a gushing waterfall, impassable.

How did this compare to our delicious double snow day in 2011? Bigger, better, deeper! Colin and I decided to trudge to the Boston Public Garden to see the willow trees and pond covered in snow. The sun was setting and the sky became pink behind the winking golden lights of the buildings. 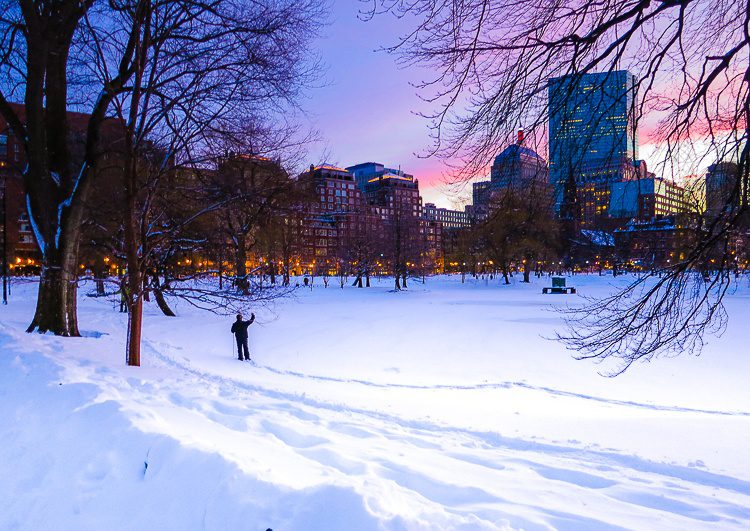 We walked to the Public Garden where some danger-loving man was walking on the ice.

Tons of Bostonians had also emerged from their blizzard cocoons, and many brought their dogs with them. Ooo, is there anything cuter than fluffy animals in jackets rolling around in fresh, deep snow?

The pups must have been thrilled to have a bigger space to do their natural business than the two-foot space their owners had shoveled out in the waist-high snow of their back yards! 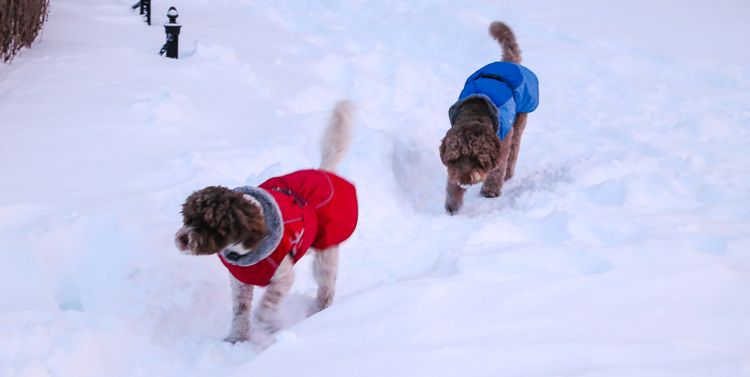 Did WE enjoy our triple snow day as much as those happy puppies? Heck yeah, we did!

So what about you? What are YOUR favorite snow memories? What is the most epic storm that you have experienced? If you live in a climate with little snow, what are your thoughts? Do share! 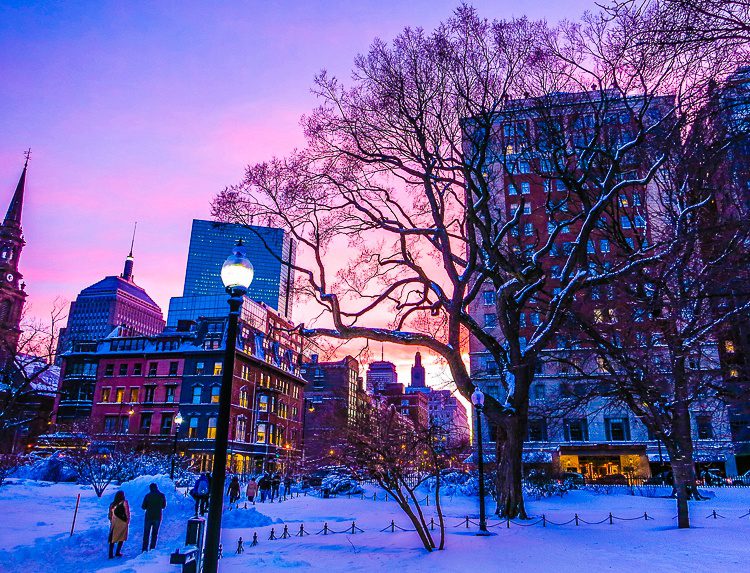 How beautiful is Boston in the snow?!

For those who want to see photos of the SIX FEET of snow Boston just got in the 2015 series of blizzards, here's my new article: https://aroundtheworldl.mystagingwebsite.com/2015/02/10/boston-snow-photos/

You are correct, sir!

I love how you call it frosting! I can't believe all of this snow. Your photos are stunning! The only snow I've seen this year is one dirty clump last weekend in NYC.

Love seeing cities blanketed in snow. Just need to get up early enough to see it before it all turns gross from everyone driving and walking through it!