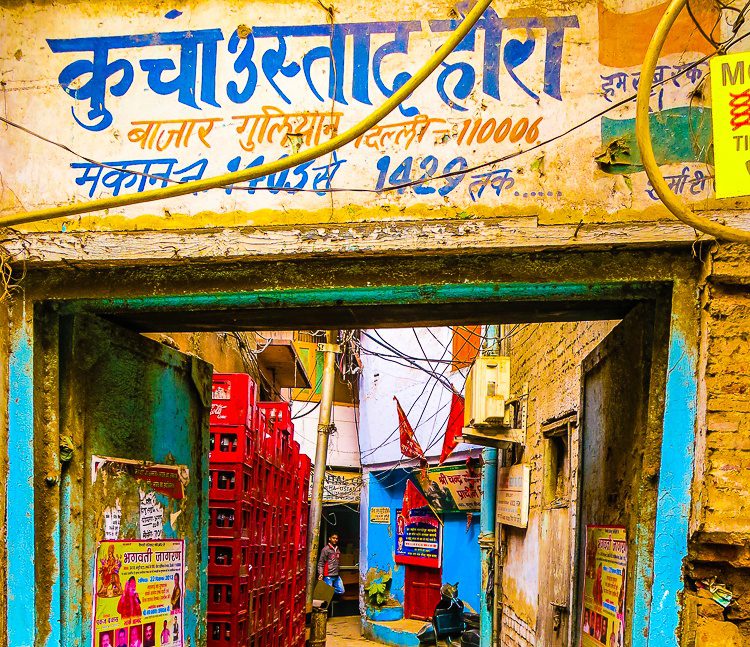 Every corner of Old Delhi, India is astounding.

You’ve likely heard of New Delhi, India, but what about OLD Delhi? Our India teacher tour spent part of our second day touring Old Delhi. By the first minute, we’d breathlessly declared, “Old Delhi has the best sights in India so far!” Check out these photos to see why. 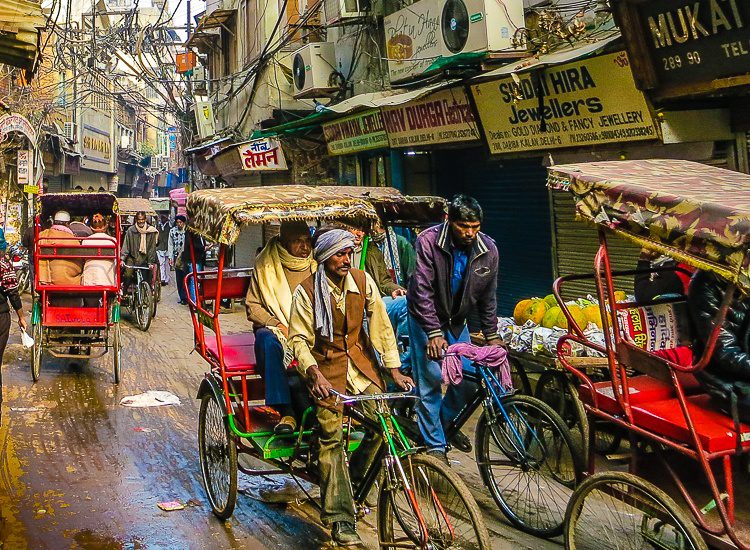 The transportation and fashion of Old Delhi differ juuuust a bit from Boston.

But first, what exactly is “Old Delhi?” Old Delhi, originally called Shahjahanabad, was formally walled in by Mughal emperor Shah Jahan starting in 1638. The city was the capital of the Mughal empire until 1857, when the British moved India’s capital to Calcutta, and a new section of Delhi was built called Lutyens’ Delhi. Hence, Shahjahanabad became OLD Delhi, and the newer Delhi became, well… you get it. 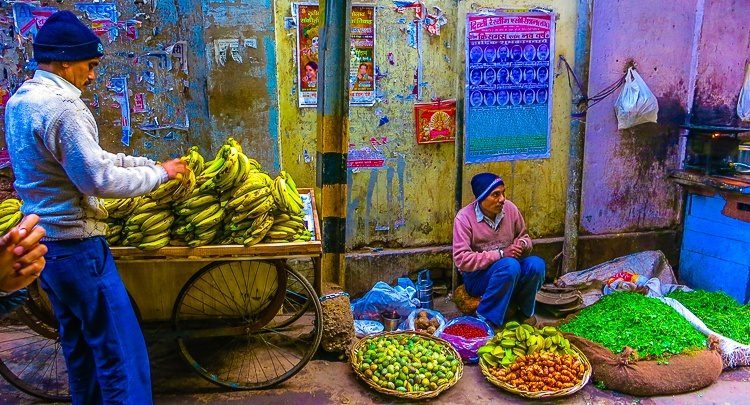 New Delhi was declared India’s capital in 1911, but Old Delhi still pulses as a center of commerce and religion. In fact, the largest mosque in India, Jama Masjid, sits right at the crown of Old Delhi, and we had a fantastic tour of that building before walking to the tangled buzz of Old Delhi’s shops. 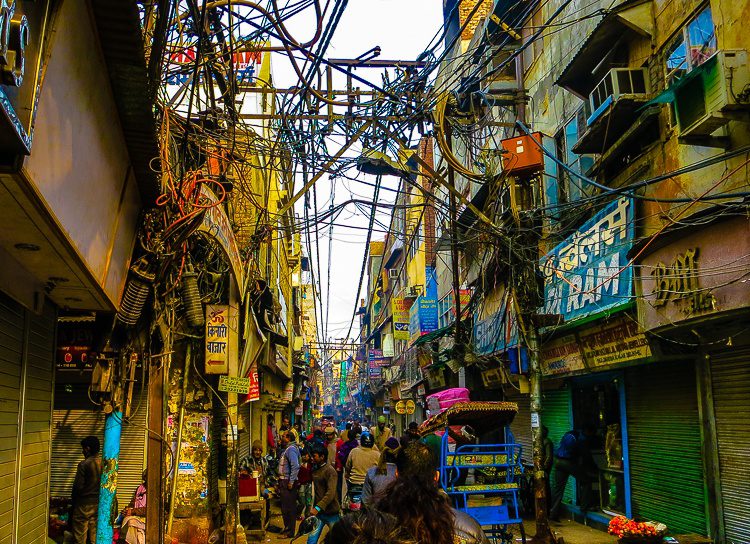 When I say “tangled,” I mean this literally. The streets of Old Delhi are twisted and tiny, and above them all, snarled clumps of electrical wires stretch. I have never seen the equivalent of those wire nests. Look at the photo above and gasp! 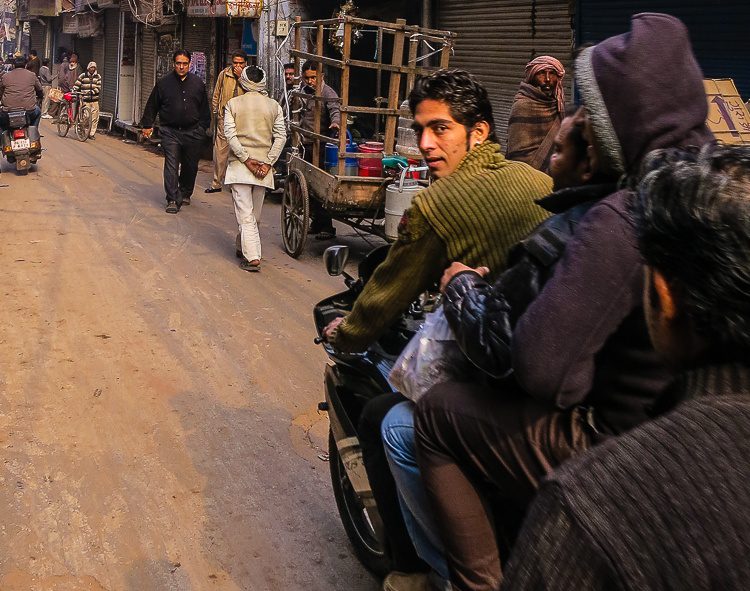 Our foreign teacher tour got a few stares in Old Delhi.

Gender was an interesting beast in Old Delhi. Despite the “feminine” nature of many of the stores (jewelry, wedding ornaments, food) eighty percent of the pedestrians we saw were male. Our mostly female teacher group got more than a few stares, though nothing sinister. 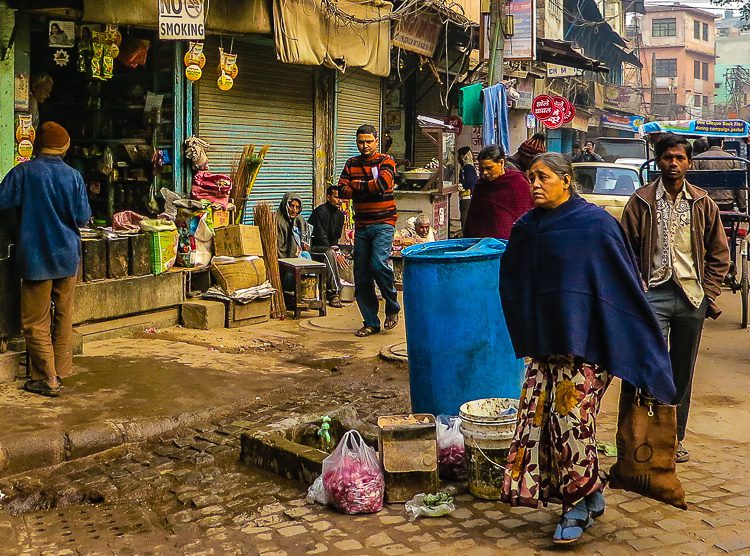 We saw few women walking in Old Delhi. This one looked particularly preoccupied.

But we LOVED Old Delhi. Its streets were intoxicating. Old Delhi provided all the spice, bustle, and uniqueness of India travel legends, with fewer upsetting sights than we had seen in sections of New Delhi like Paharganj. We began our tour on foot (little knowing the rickshaw surprise our guide had planned for us later), drinking in the colors, faces, and smells. 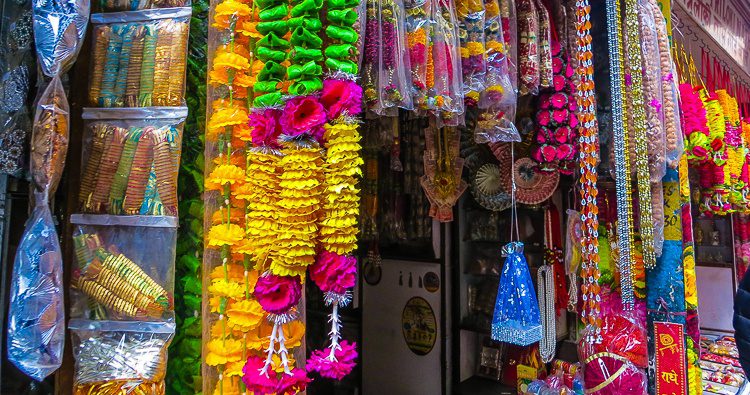 There were endless stores for wedding ornaments like this one.

One of the most painful parts of touring Old Delhi is to resist burying one’s face into the rainbow colored fruits and vegetables sold everywhere. In developing countries like India, travelers are advised to follow the “peel it, cook it, or forget it” rule with produce to avoid getting sick. Though I may not have been able to crunch into raw lettuce, I did a lot of eating with my eyes! Can eyes burp? 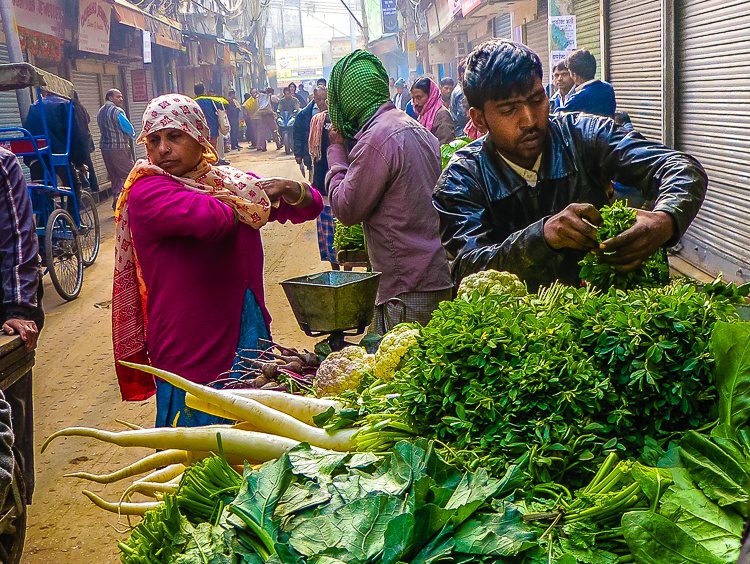 Delicious as those greens look, don’t eat them unless they’re cooked!

In Old Delhi, fashion was muted for winter. Men wore sweaters and scarves (partly for the cold and partly, perhaps, to ward off India’s thick air pollution). The few women we did see had darker colored saris, and several wore headscarves. 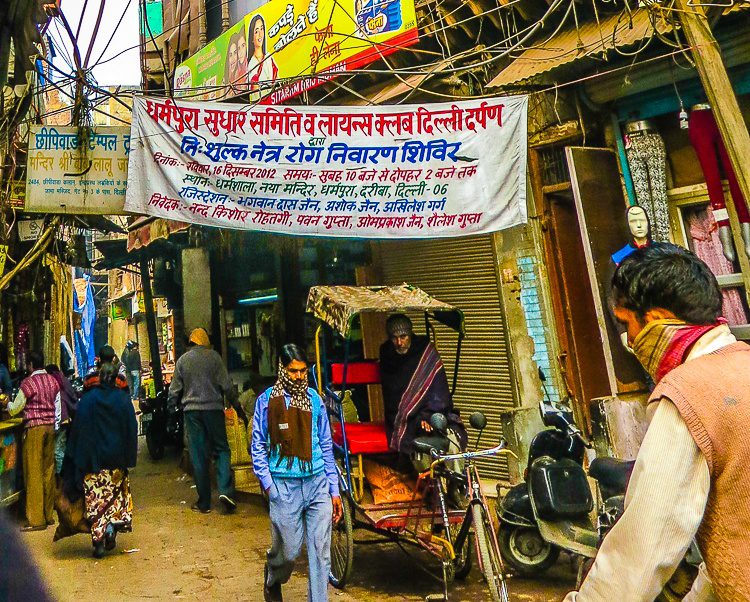 It was India’s chilly winter and people were bundled up.

We saw more modes of transportation in Old Delhi than you can imagine, ranging from bicycle rickshaw, to giant wooden wheelbarrow, to head-top balancing of giant objects which rivaled the head balancing skills I witnessed in Ghana, West Africa! 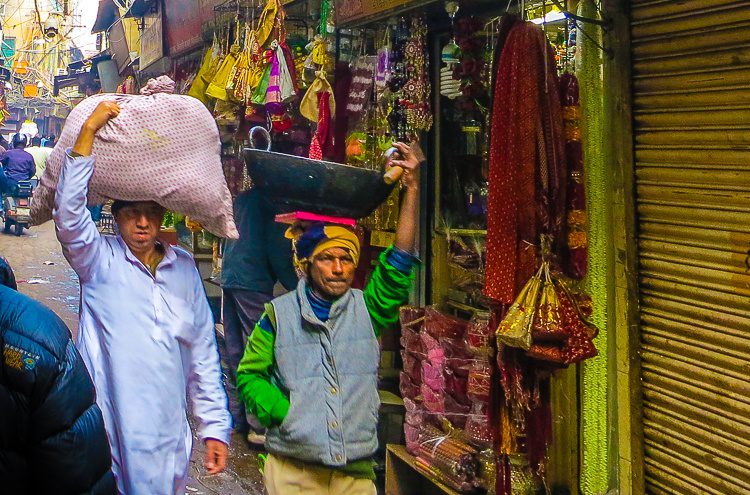 So many ways to carry goods in Old Delhi…

I’m deeply happy to have these photos to gaze back at, because one cannot take in even a fraction of Old Delhi in a mere afternoon. Looking again at these pictures, more and more fascinating elements pop out that I didn’t see before. And some really funny things, too.

You could stare at this Old Delhi scene all day and still see new things.

For example, doesn’t this produce vendor bear a striking resemblance to one of his shiny green bell peppers? Was his choice of emerald jacket subconscious or deliberate? Does anyone ever try to take a bite out of him when he wears it? Crunch! 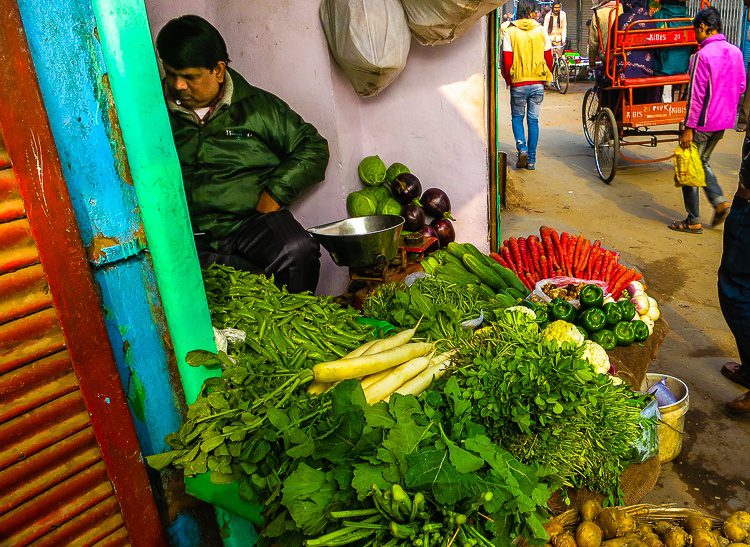 Does this vendor’s jacket make him look like one of his green peppers?

Many of the same consumer culture questions raced through my head in Old Delhi as in Manhattan’s shopping districts. Namely: “Who buys all those knick knacks?” I mean… do you really NEED that hanging camel doll, below? On another note, check out that roof. 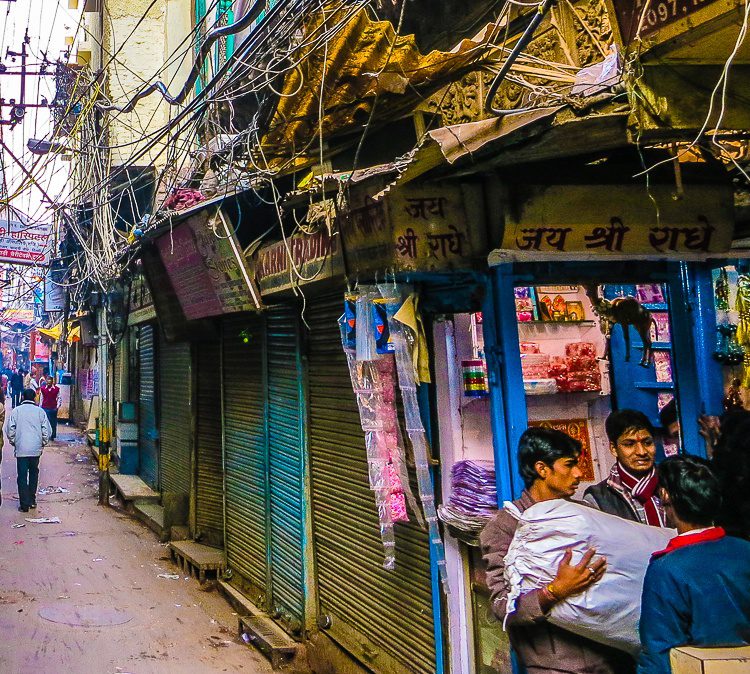 What conversations must go on in Old Delhi…

And this scene, below, exemplifies the meaning of the word “juxtaposition” or hilarious contrast. How can such a grumpy expression exist next to such joyful neon flower garlands? :) 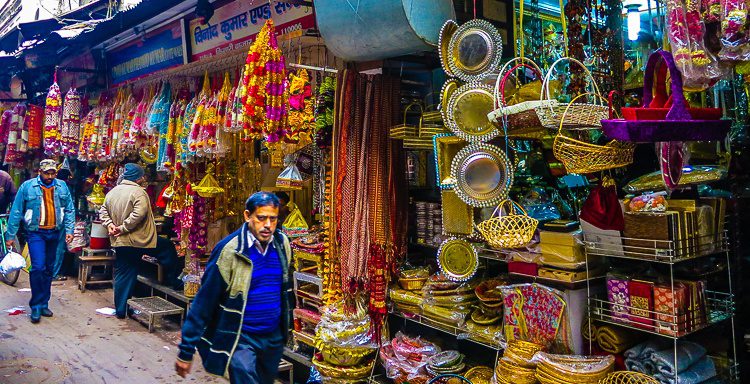 A grumpy man in front of a very cheerful store. Juxtaposition!

But perhaps the funniest of these photos comes from the following photo bomb. As I posed for my husband to snap a classy Old Delhi photo of me, a stranger in a jaunty leather jacket sidled up next to me, placed his arms behind him in a formal stance, and gave his best model pout to the camera. I was totally oblivious to all of this until editing these photos today! Oooh, Old Delhi, you rascal. 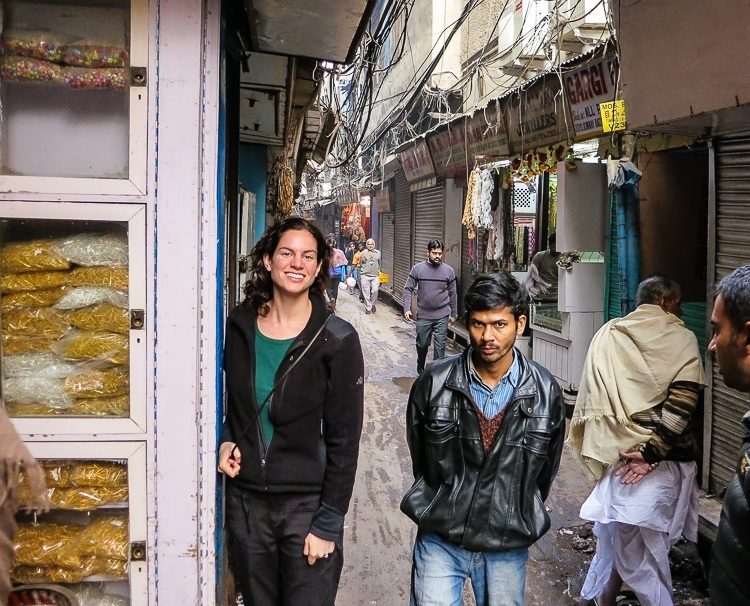 This random man snuck into my photo, unbeknownst to me.

In sum, ’tis true that Old Delhi provides some of the best sights in India! I do hope you enjoyed these pictures, because they document just our first ten minutes in Old Delhi. Many more pictures are on their way in the next several posts. As always, I eagerly look forward to your comments!

I love that dude's facial expression (in the last photo)...

I've never had a strong desire to visit India, but the colors are insane! After reading about the Holi festival after seeing it on a doc, I started researching, and they're holding one in Germany in May - imagine that!

Jenny please come back to India we are missing you alot.. lol

what gorgeous colors!! but those wires - they are CRAZY!