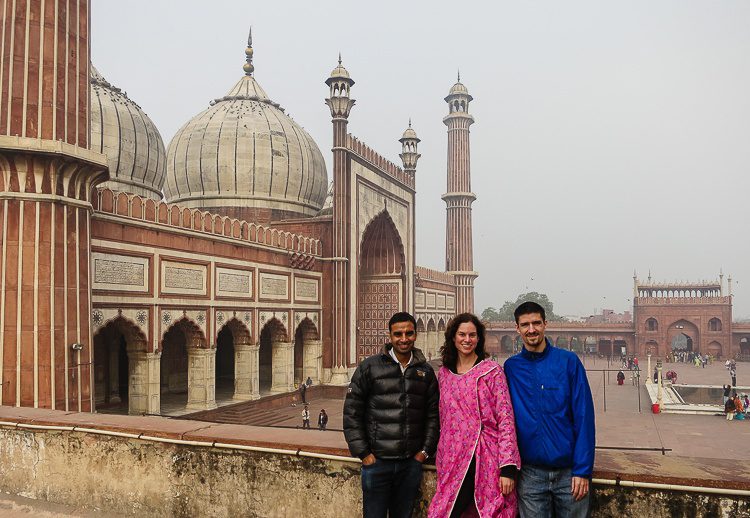 We spent Christmas at Jama Masjid, the largest mosque in India! And I wore this neon pink robe.

I am a half Jewish, half Christian gal who spent Christmas at the largest Islamic mosque in India. And it was beautiful!

Though I love gathering with family during the winter holidays in America, I’ve never been obsessed with gifts. How freeing, then, to spend December 25 in a country where just 2.3% of the population is Christian, and holiday consumerism isn’t ubiquitous!

T’was the morning of Christmas and the second day of our India teacher tour… and Jama Masjid mosque was our destination. 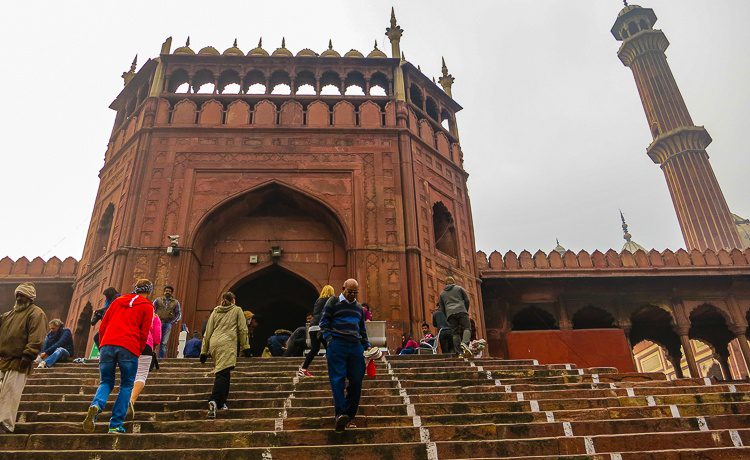 Walking up the stairs to majestic Jama Masjid mosque in Old Delhi, India.

As our tour van pulled through the maze of Old Delhi and up to the mosque entrance, our guide Manu explained, “Jama Masjid mosque was completed in 1656— over 120 years before the United States became a country!”

Our group climbed the steep stairs. At the top, Manu instructed, “Just as we did at the Sikh temple in New Delhi yesterday, please remove your shoes here as a sign of respect for the mosque. You may leave your socks on or pay a small fee for slippers.” We added our footwear to the diverse pile. 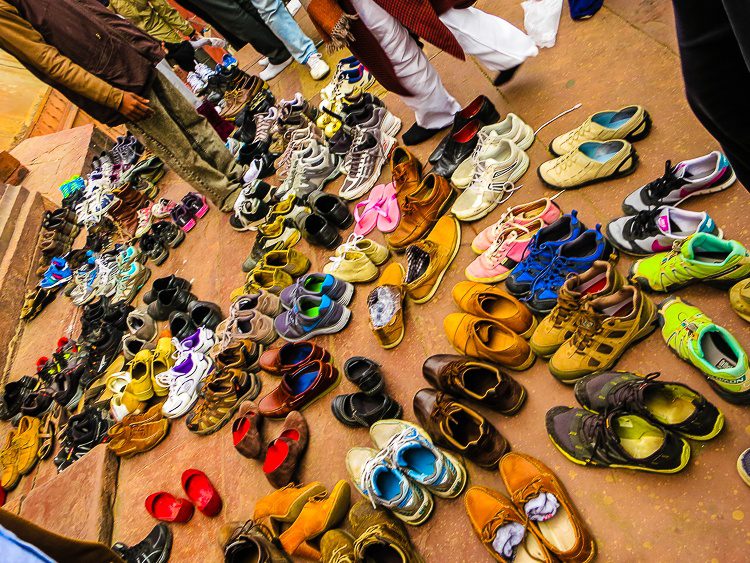 To enter the mosque, you remove your shoes, and women must wear robes.

The ladies in our group were then instructed to select brightly colored robes from a pile and put them on. “Why do we have to wear these rainbow colored mumus?” one of the female teachers in the group asked.

“Tourists used to not have to wear them,” Manu explained, “but the Imams of the mosque spent so much time trying to decide which visitor attire was appropriate and which wasn’t (where do capri pants fit in, for example?) that they concluded it would be easier to just have every female tourist cover up completely with complementary robes.” We did have to admit that the colors gave us a jaunty flair. 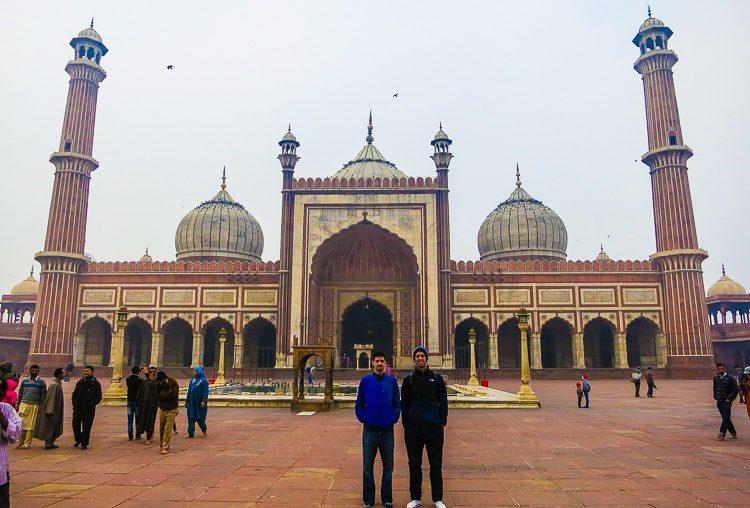 Colin and David in front of the glorious mosque, in their socks.

We strode into the mosque courtyard, and– GASP!– our breath was taken away. What a glorious building! “Jama Masjid was ordered to be built by Emperor Shah Jahan,” explained Manu, “the same Mughal emperor who commissioned the Taj Mahal.” That man knew how to create fabulous monuments! “It took over 6,000 workers six years to build.” Can you imagine being part of such an epic construction project? 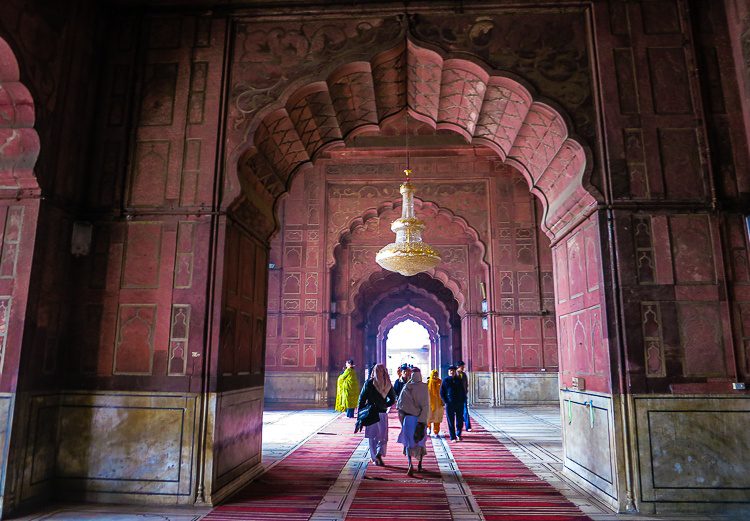 The inner halls of Jama Masjid mosque are stunning.

As we walked through the courtyard and under the arches of the indoor halls, Manu mumbled, “You know, it is possible to climb up the 130-foot tall tower over there… but I do not recommend it. It is very high and narrow, and quite scary.” 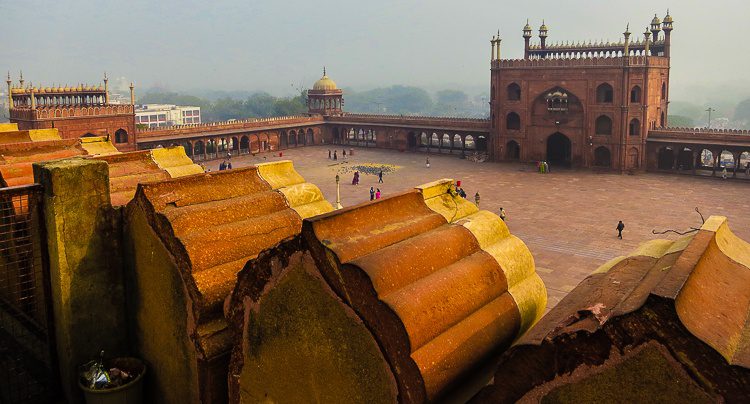 We began to climb to the top of the highest mosque turret.

Colin, David, and I sprinted to the turret entrance and eagerly paid the small fee. The first flight of stairs was easy, and two cats the color of the mosque stones purred encouragement as we passed them. Then came the turret stairs: a narrow, dark spiral with barely enough room for one person to move. When a pack of Indian tourists encountered us on their way down, we had to plaster ourselves to the cold stone wall to let them squeeze past. But at last we reached the top. Ooh, what a view! 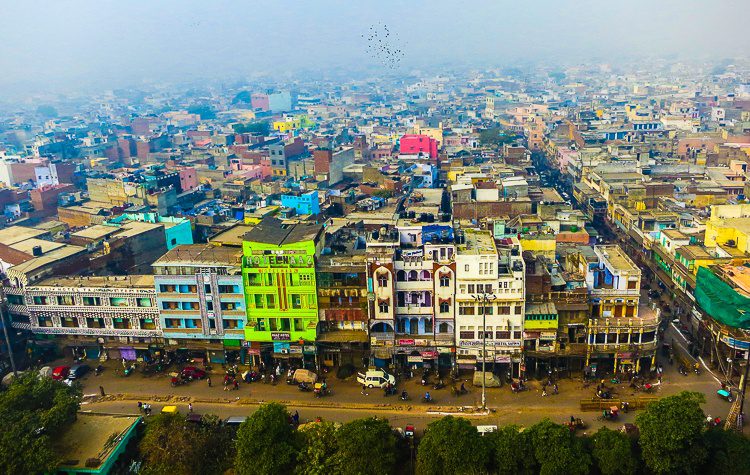 The view of Old Delhi from the turret top: haze, birds, and all.

On one side of the turret, the massive mosque courtyard stretched far below us. To the other side, the tightly bunched buildings of Old Delhi winked through the haze of India’s pollution. Packs of pigeons circled.

Then I saw the man gesturing towards us. He motioned for me to pose for a photo with his family: Muslim women grinning under their carefully wrapped headscarves. I joyfully obliged. 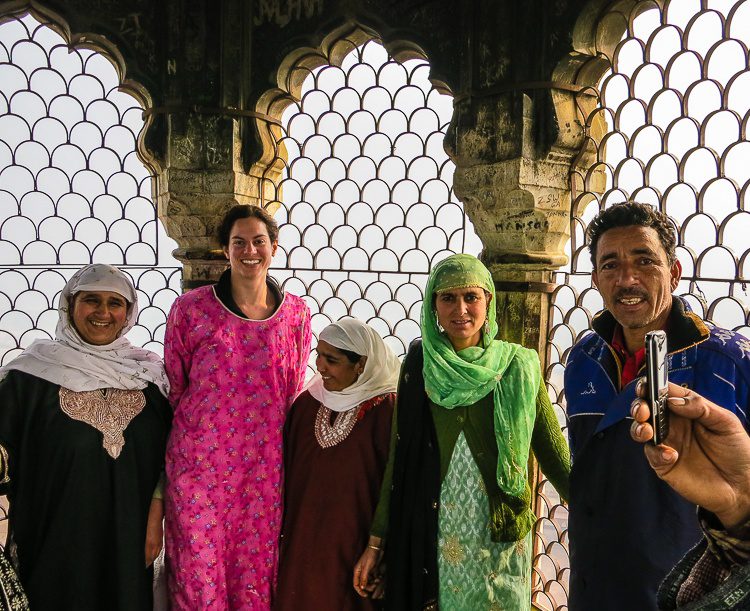 A friendly Muslim family requested to take a photo with me at the turret top!

What a refreshingly unique Christmas! We were at the top turret of the largest mosque in India, smiling and posing with a devout Muslim family, not a Christmas present in sight except our presence together as a human family! I wished those who perpetuate negative stereotypes about Muslims could have felt the warmth and happiness in that moment on the tower. 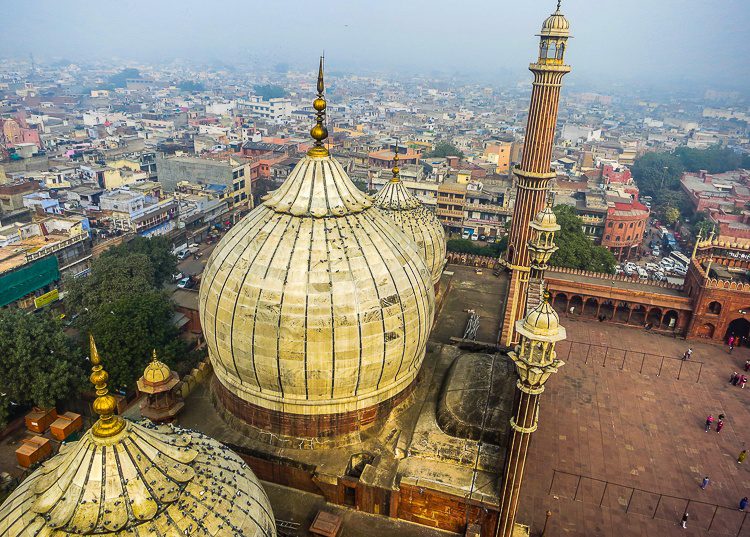 What a view, and what a building!

At this point Manu emerged from the tiny stairway opening, his bare feet slapping the cold stone. All together, we gaped at the view from the tower until our watches reminded us it was time to make the dark, cramped descent down to rendezvous with our waiting group. We made it back to the courtyard safely, with a short detour for my brother to snap photos of the surly cats (not included here, as they kept turning their heads from David’s lens so all you can see is their rumps). 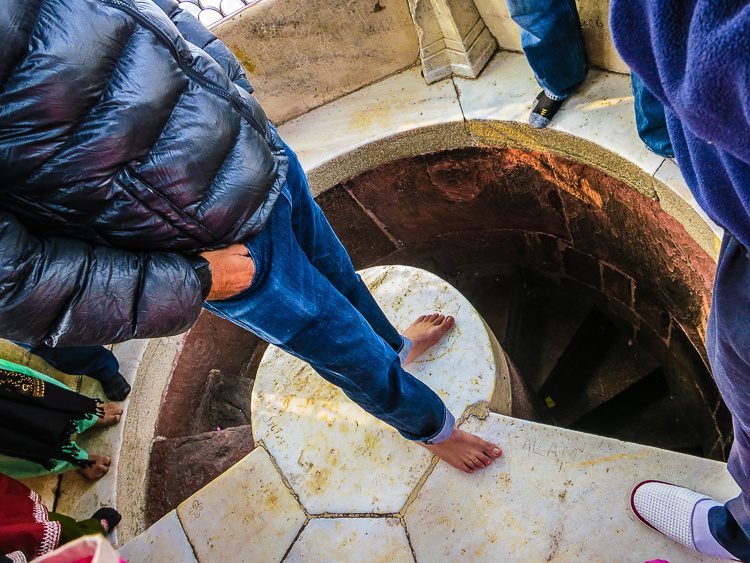 Would YOU take on this tiny turret staircase? For 130 feet?

As we skipped across the huge courtyard, I tried to imagine it packed with people. Jama Masjid is, after all, still a working mosque. “25,000 people can pray here at a time,” Manu explained.

“WHOA!” I responded, reeling with the image and the general vastness of India. 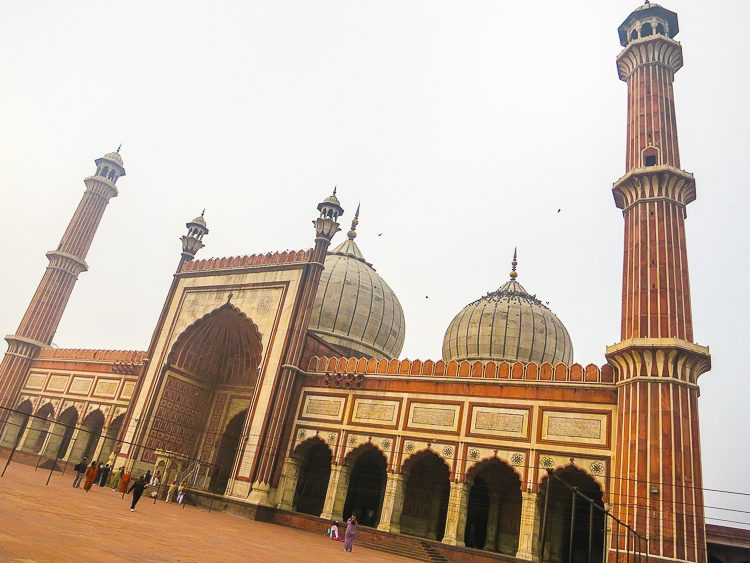 We went all the way up that skinny tower?!

Speaking of multitudes, there were certainly multitudes of pigeons at Jama Masjid mosque. In India, pigeons are considered desirable, so people scatter birdseed on the ground in important places for the birds to swoop in and eat themselves silly before flying off.

During our visit to the mosque, we spotted two tiny kids gleefully doing the “I am a child running into a pack of pigeons and forcing them to fly away!!!!” move. It was so cute, and my brother reminded me that we used to do the same thing back in Boston as kids. Ah, the international dance of child and pigeon! 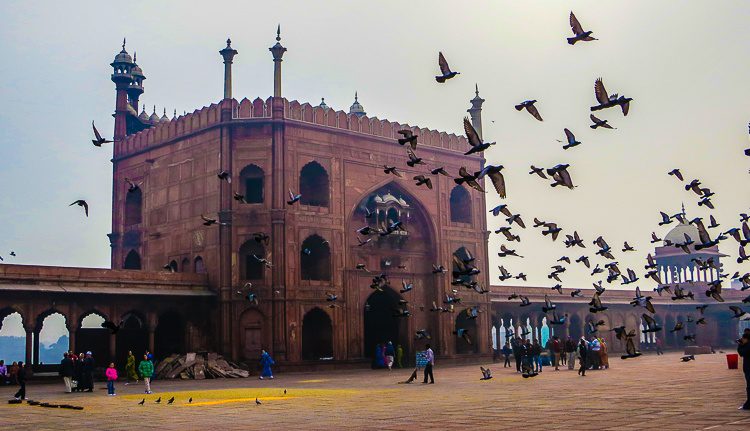 Our visit to the lovely Jama Masjid mosque was coming to an end, but our Christmas Day in India had just begun. We laid our robes back into the pile from whence they came, and retrieved our shoes from the footwear sea. I was beaming. What a wonderful visit! 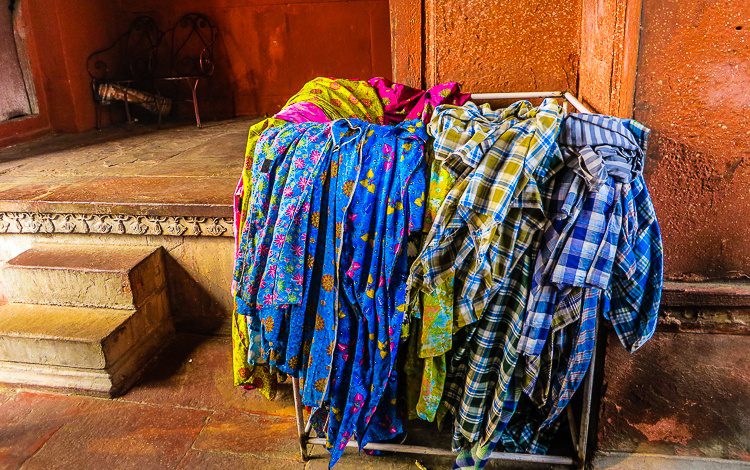 We gave back our fashionable robes and headed out of the mosque, inspired.

Readers, what are your thoughts after reading this article? Have you had memorable tours of mosques around the world? Have you ever spent Christmas in a non-traditional way (by American standards)? What questions, thoughts, or additional information do you have? Do share!

Hi Ms. Marshall, I spoke to you in person about your websites, and this article struck me the most as I am a Muslim. It is nice to see that others are open to the idea of going to the mosque. Your sites are visually appealing and the photos are very nice, as well as your writing. I agree it does look like you put a lot of work into this. Glad I came across this!

Thanks so much Hassan! Be in touch!

This is a cool post Lillie! I spent last Christmas at a Tibetan Monastery in China. Love unusual random festive (or un-festive) experiences. Jonny ( http://dontstopliving.net )

Hey Lillie, this post is really inspiring for travelers. The photographs also amazing now words to say! . Have you ever visited Kerala. A wonderful place in India. Please make it next time if you are not. Once again thank you for having such a wonderful website and informative articles.

Thanks so much, Joseph! I haven't been to Kerela yet, but I've heard GREAT things, and it's very high on my wish list of places to go!

Such wonderful photos... so colourful on what looked quite a grey day. And to answer your question on the turret: no way Jose! Must say, isn't Islamic architecture amazing? I have yet to see a mediocre mosque, they're all so stunning.

Perhaps it's because of its connection to the dawn of mathematics, but Islamic architecture is consistently phenomenal!

Thank You for the very informative Artikel/fotos!!