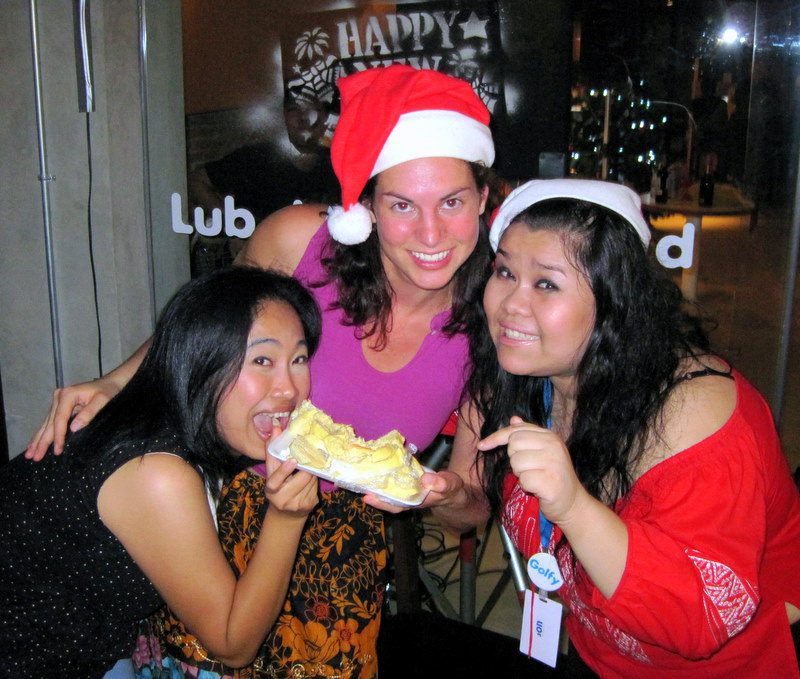 In Thailand exactly a year ago, with the illegally smelly fruit!

Exactly one year ago, I was almost arrested in Bangkok, Thailand for bringing an illegally smelly fruit onto a public train.

You can read the whole dramatic story by clicking here, but the short version is that durians (giant, monstrously spiky fruits common in Asia) smell so horrifically bad that there are signs all over public transport in Southeast Asia warning against carrying them. And I did. And a Thai policeman nearly locked me up for it. Silly American! My bad.

But all was settled and freedom remained. So now, 365 days and half the Earth’s distance later, I am back in the United States taking my annual (minus last year) family journey to New York City and Washington DC again. Hooray! 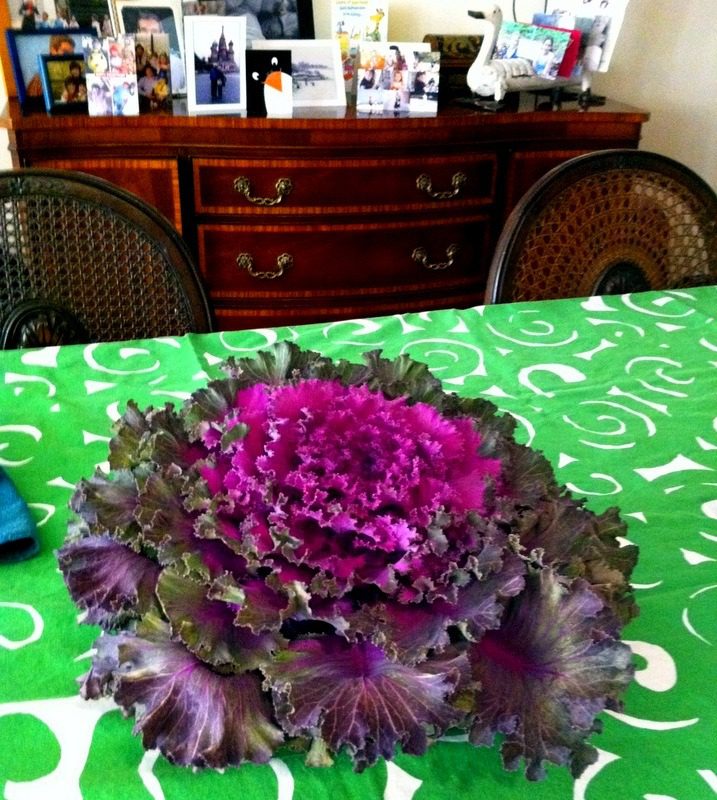 Which brings us to the crazy vegetable situation in my Aunt Carol’s New York apartment.

My wonderful Aunt Carol is the mother of famous “Pineapple Eric” (click to read the article that has gone viral and has over 3,000 views) and “Cauliflower Doug,” so it may be no surprise for you to learn that Carol is both an amazing cook and a creative artist.

So check out these photos of Carol’s centerpiece that we all feasted our eyes upon as we feasted our bellies on salsa macaroni and cheese! Can you guess what it is?

(Dramatic pause to allow you to stare at the photos and guess. Tick, tock… Tick, tock…)

The answer is: a highly nutritious vegetable known as Kale!

Gaze now upon the frilly forest green and rich purple folds. If this kale exuded music, can you imagine the sonorous music it would make? Fancy, for sure. 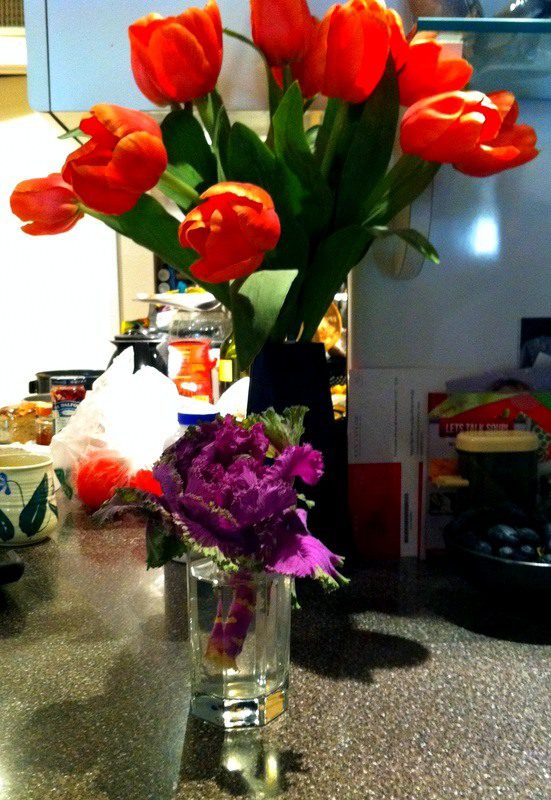 As I was deep into this kale-ogling and these thoughts, Carol jarred me out of my trance by declaring, “In a few days I’ll boil it and make Kale Soup.”

“What?!” I shrieked, horrified.

All of a sudden I had a flashback to blood pouring out of a severed neck in Ghana. (Don’t get too freaked out– read on.)

“You mean we’re honoring this kale now by looking at it fondly, like a pet,” I gasped, “but in a few days you’re going to slaughter and ingest it?!”

The gory flashback from Ghana returned again. It’s something I haven’t written about at all on this blog because it was so intense, but I might as well tell you now what happened.

For much of the 3 months I spent earlier this year volunteering at Youth Creating Change of Ghana, I was the only foreign volunteer, but for a few weeks there was an American student there as well. As she was preparing to leave, this lass decided she could not possibly leave Ghana without first… slaughtering a chicken. 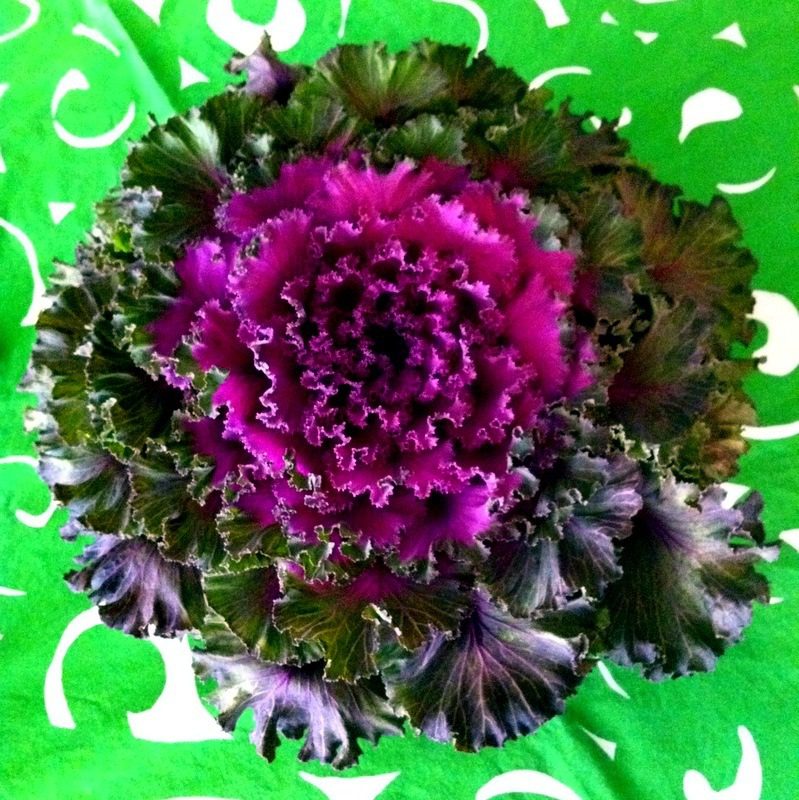 What music would this kale exude if it made music?

Ever-accommodating, our Ghanaian hosts said, “No problem. We’ll get you a chicken.” I nearly passed out. Chickens were always around us at the YCC Guesthouse in Ghana, clucking around our feet, their heads bobbling endearingly forward and back as they tapped their beaks against the earth. Kill one?!

The day came. A man arrived with a wildly thrashing chicken in his hands. I strode towards my bedroom to shut the door and vowed not come out for the next hour.

Suddenly: “Lillie! We need you to hold the video camera!”

Oh my gosh. I was dragged out of my room by the volunteer, and had a piece of electronic equipment shoved in my hands. The chicken screamed in the background, guessing its fate. 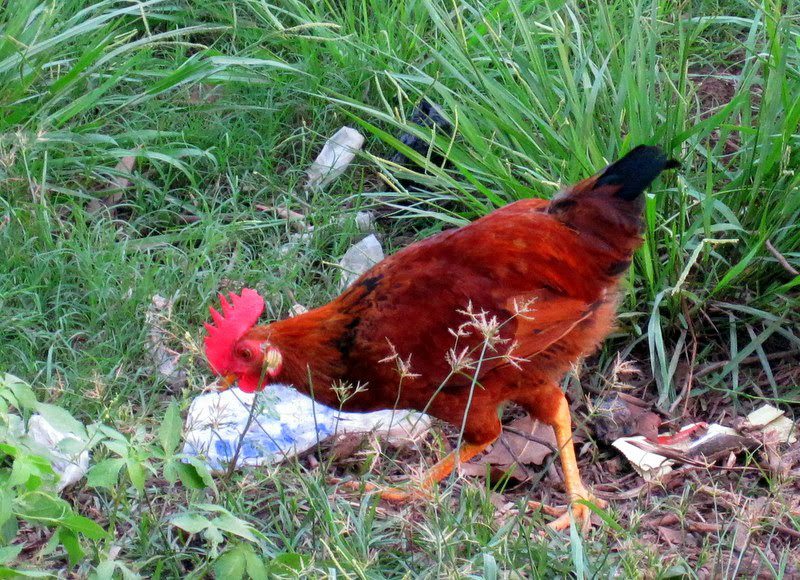 One of many chicken/rooster photos from Ghana.

“Why are you upset?” someone asked me. “You have no problem eating chicken, so you need to see where it comes from.” I followed them outside, staring at the ground, then lifted the video camera and held it towards my coworkers.

“First you make a hole in the earth for the blood,” said our Director, John. The volunteer did, using the point of the large, dull machete she held.

“Now you put some water in the hole and offer it to the bird to drink. It is like an offering to the bird before it dies. And it makes it stick its neck out.”

The volunteer complied. The chicken began lapping up the sweet beverage thirstily. 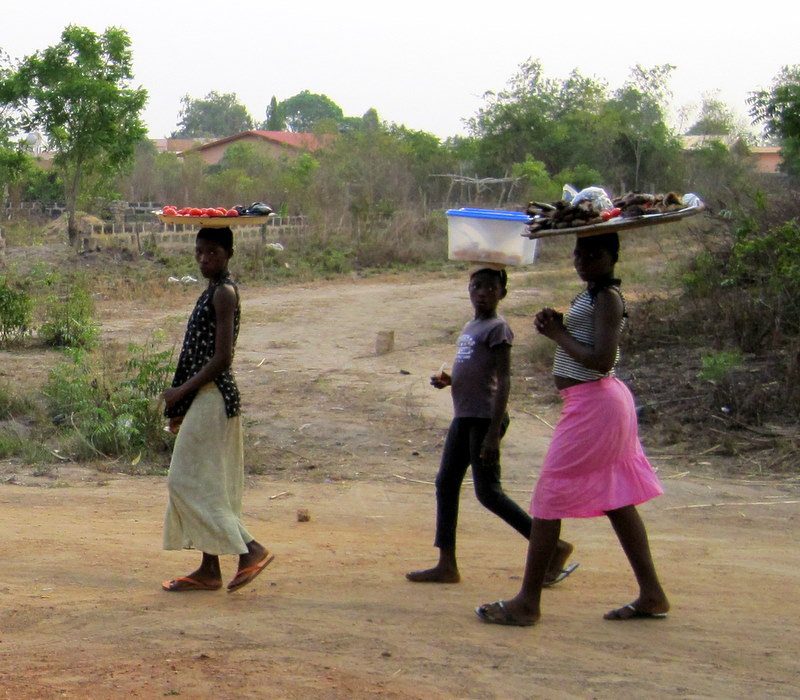 Ghanaians watching what was going on at the Guesthouse.

“Next you grab the neck and start sawing with the machete. Make sure the blood all goes into the hole.”

It’s hard to aim a video camera when you refuse to look directly at the subject, but I tried my best. The machete sawed at the neck. The chicken struggled. The blood began to fill the hole. The volunteer was intent. Feathers got in the way. The chicken screamed. The neck bent but didn’t seem to ever get cut. I can’t remember if someone stepped in to finish the job. And then the chicken was limp.

John had the girl drain the rest of the blood into the hole. Then we gave the carcass to Millicent the Magical Cook to de-feather, de-gut and cook. It was nearly impossible for me to eat the stew that day, although all that had changed in the taste was background knowledge.

I did not become a vegetarian at that moment; in fact, since then I’ve had no problem eating meat that I didn’t witness being slaughtered. But I knew then and there, choking down that particular flesh, that I am a willfully ignorant wimp from a privileged country. 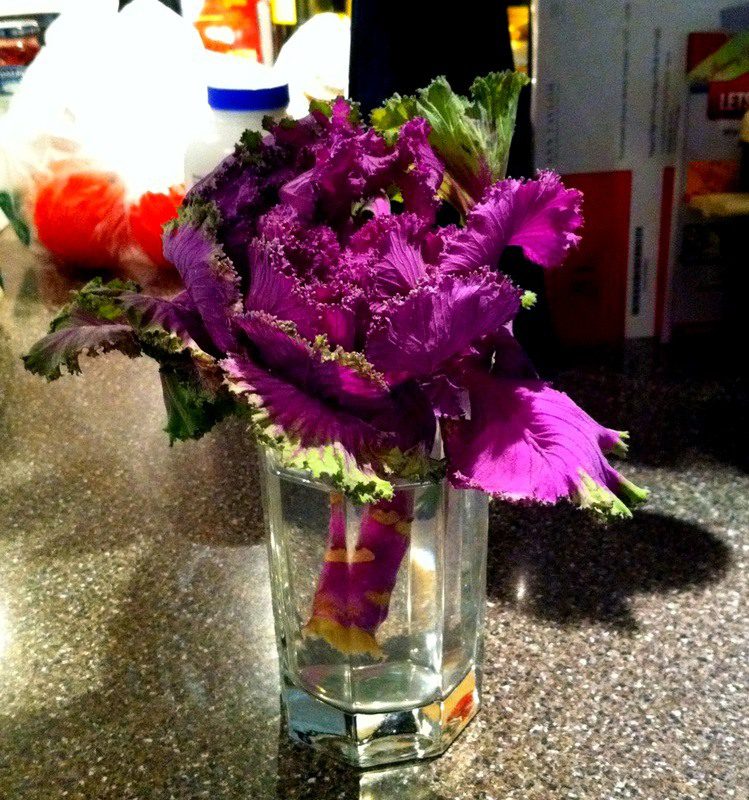 That delicate kale neck… like the Ghana chicken neck!

Back to the kale in Manhattan.

This article connecting stinky illegal fruit in Thailand, vegetable “flower” arrangements in New York, and bloody machete chicken slaughter in Ghana may seem like a stretch… but it’s reality.

When, in the course of one single year, you are in so many geographically and culturally different places, and you find yourself participating in boatloads of diverse activities, your memory bank becomes a swirl of contrasts and startling connections.

May our New Years be as rich, action-packed, and varied as 2010, and may the nutritious Kale Soup fill the bellies of my loved ones with nutrients, as I come to peace with the fact that we must let some things go to embrace the new and delicious. 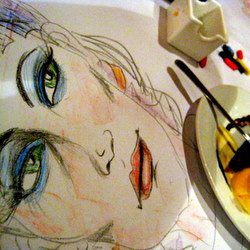 Why You CAN Draw Well, and Why Dumb Doesn't Exist
← Read Last Post 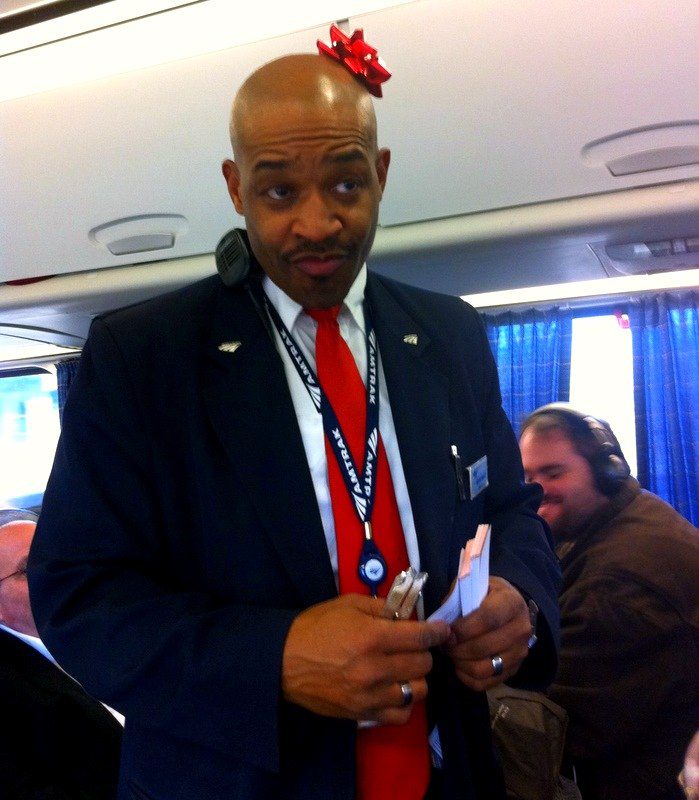 I love how you started off your article with a hook that made the reader more interested in your article.

Wow, such a great article. It was both hilarious and very descriptive (especially the chicken part). I have also seen a chicken being slaughtered and it's not pretty!

â€œLillie! We need you to hold the video camera!â€ made me laugh so hard! I guess when something happens that needs to be recorded, they are too excited to hold the camera.

Ms. M., this is a very interesting article. My take on eating meat is that the meat is already dead, you can't save it now, although I'm sure many people would disagree.

Many would agree, though!

I don't blame you for not wanting to look at the chicken being slaughtered. Do chickens just wander freely in Ghana?

In more rural parts of Ghana, they do. Cluck, cluck!