Article #1 in the Student Travel Stories Series from our tour of Beijing, China.
By John, Age 17, 11th Grade in Boston. Born in the U.S. to parents from Vietnam. 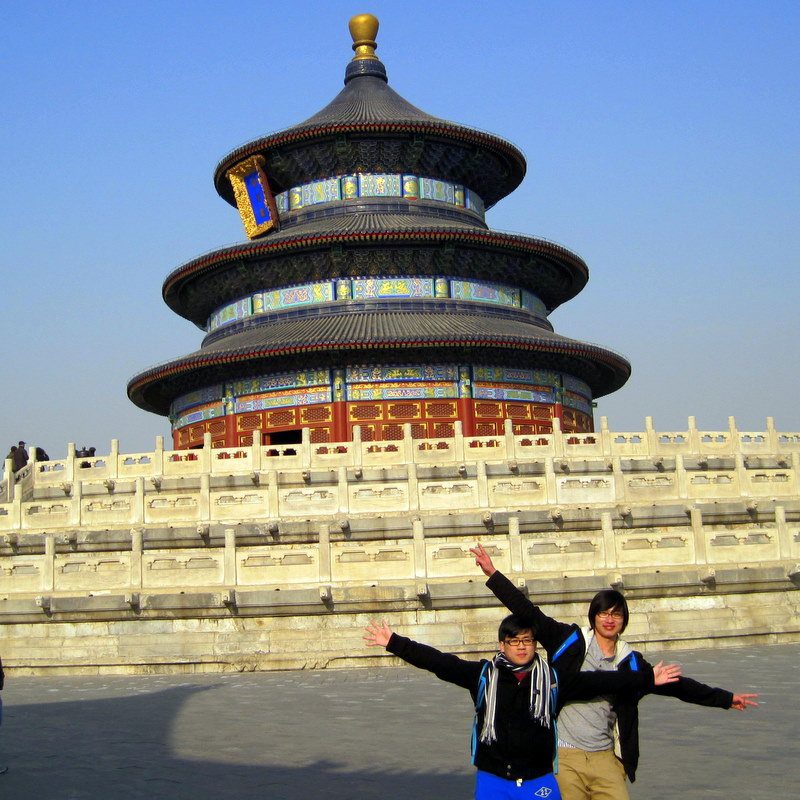 John (on the left) at the Temple of Heaven in Beijing!

Q: John, what did climbing the Great Wall make you realize?

A: I pay so much respect to the Great Wall of China because it is over 3,000 miles long. That is as far as the distance between Boston and California! I really appreciate how hard the workers labored to make it. We have to stop and thank them. I learned from our guide that many of the people who built the Great Wall were forced to labor by the government. Many died for it. Thousands and thousands of laborers died. But without the Great Wall, the Chinese would have fallen to invaders.

I just stood there on the Wall thinking about that, looking at the scenery, and I felt deep appreciation. Imagine how difficult the Wall was to create, because it’s on mountains. Imagine even just BRINGING the stone up… on and on for 3,000 miles with no modern machinery! And the weather conditions… The conditions were way too hard. I can’t even picture building the Great Wall! 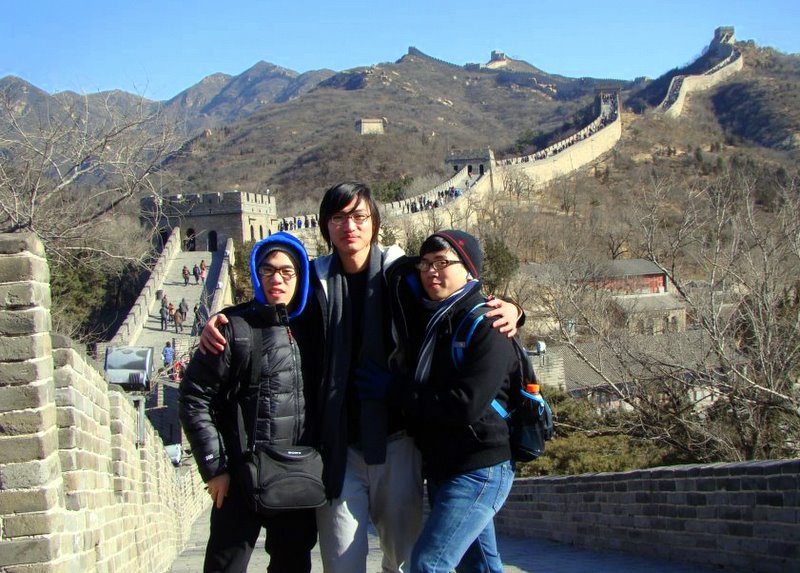 John (right side) and friends at the Great Wall of China.

This makes me think of schools in Boston. Just like people don’t appreciate the laborers who created the Great Wall, there are so many students who don’t appreciate teachers and who yell at them. Now I will think more of teachers and imagine being in their shoes. It’s just what they have to do: teach. It’s them helping us. I am comparing teachers to the workers who actually made the Great Wall. I’m appreciating the teachers now. I’m not taking them for granted.

Q: What did you think of the crazy foods at the Night Market?

A: I loved the Night Market food options! Food like that gives us a chance to try new things, even though the food might be weird. I think it helps young writers to open up their mind and think outside the box. Instead of just one part of the cow, why not try the intestines? It helped make us more rounded characters.

Q: You’ve now traveled to both China and Vietnam. How do you compare the two countries? 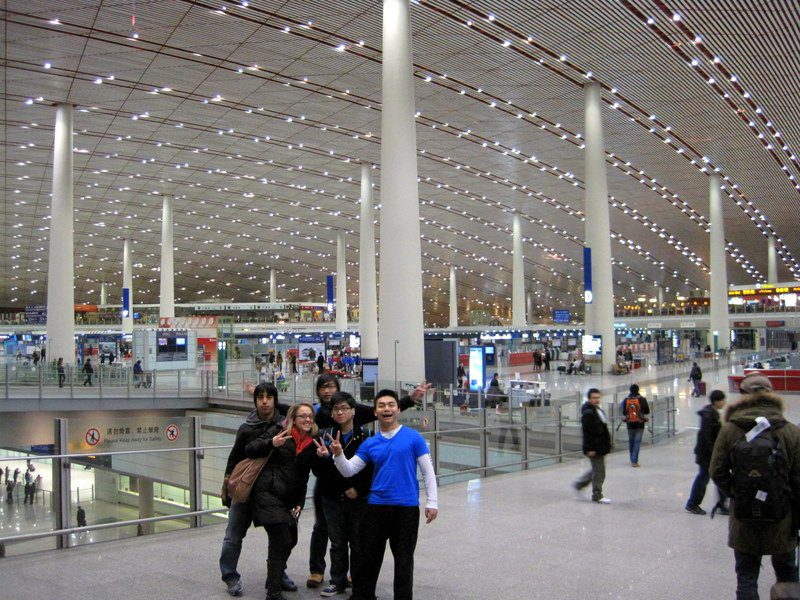 A: I was so curious how China would compare to Vietnam. I had a lot of stereotypes about China, going in. Based on my stereotypes, I thought the Chinese are uptight, all about business, all about grades, strict, etc.

However, now that I’ve traveled to China, I see that’s not all there is to it at all! From my observations now, I think Chinese people are no more uptight than Americans.

I also see and respect that Chinese people have a strong sense of pride. Some might think Chinese people are stubborn, but I see it’s pride, and I love seeing Asian people who are prideful: people who are determined to stand up for themselves, no matter what happens! One example of this are the traditional-style Hutong neighborhoods of Beijing. Families stay there for over four generations (like the family we ate dinner with one evening) even though they could get very high pay if they sold their land (because it’s in the middle of the city), and even though it’s so cramped, with one room and an outdoor bathroom shared with the neighborhood. But they are enjoying living in the Hutong despite this, because of the people around them. They can talk with their neighbors and be friendly, compared to modern city life where no one knows each other. 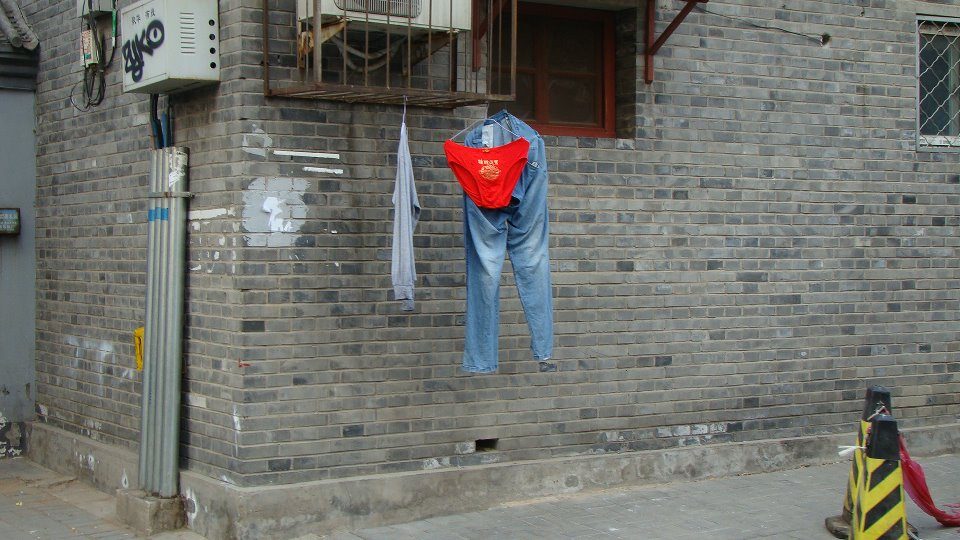 Laundry in a historic Hutong neighborhood of Beijing.

The place in Southern Vietnam where my family is from reminds me of the Hutong areas of Beijing. People like living there because they are friendly and familiar with their neighbors. To have a better understanding of the Chinese people, visiting a Hutong is very important. It helped me shatter my stereotypes about China.

Q: What was it like traveling with a big group of students from Boston?

A: It helped me a great deal. When we were walking on the Great Wall, I was about to give up one fourth of the way, I was so tired, but then I noticed everyone in my group was still continuing, and that really boosted my morale to keep going. The group helped me so much to accomplish my goal. I loved knowing that there was always someone to talk to and relate to, so we could try to understand the culture together. 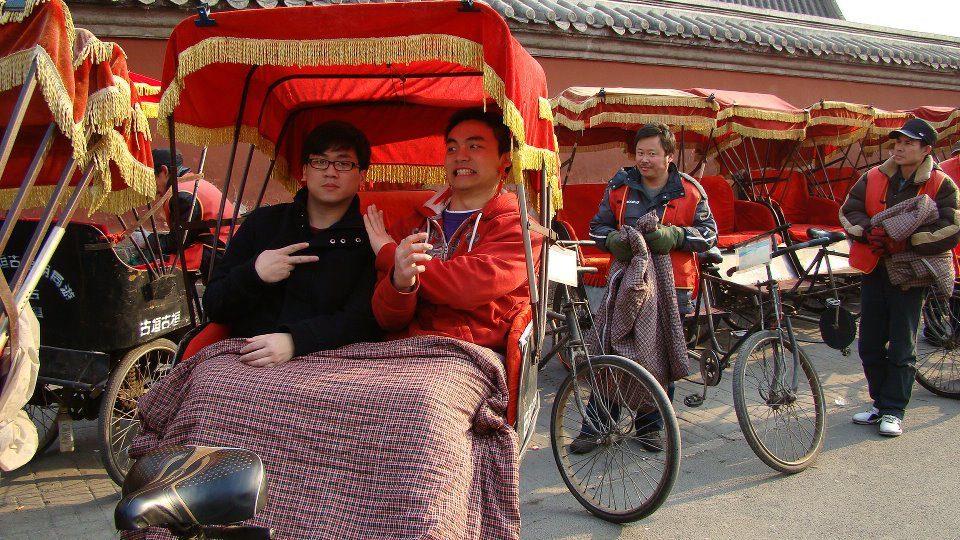 John (left) and friends during our rickshaw tour of a Hutong.

Because we were in a group, we also felt more comfortable meeting local people. One day we randomly started talking to a man from Beijing who we were sitting near. It turned out he had been an exchange student studying in California! I really liked that because it was funny how we were communicating with each other. I was trying to translate into Chinese (I take Chinese at school so I wanted to practice) and he corrected me, then I corrected him with his English and it was really hilarious! When we were talking, I was sitting with Terry, and I said, “She [Terry] doesn’t understand,” but I said it wrong, saying: “YOU don’t understand!” We were both confused and it was hilarious. Then the man later figured out what I said. 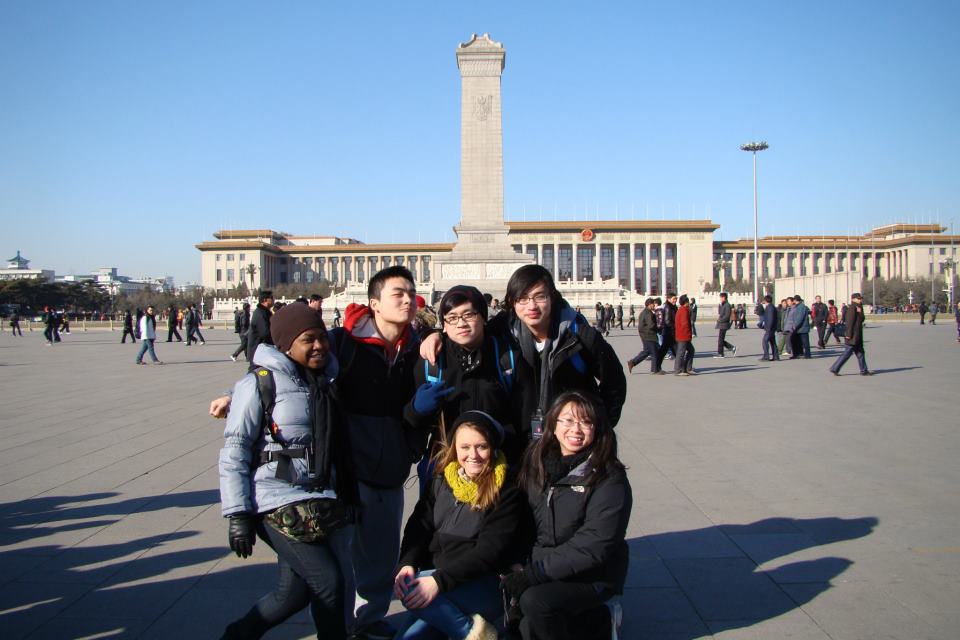 After that, I was kind of disappointed in my language skills (I’m in Chinese Level 3 at school) but it really shows that learning a language in school is just not enough. I had to go to the culture and actually use it. As a person who takes another language, going to a place where they speak it helps A LOT to show how they use the language in everyday life.

Thanks so much, John, and thanks to EF Tours! Our China trip was a pleasure.

Readers, what questions or comments do you have for this wonderful traveling student?

I cant believe that their airport is so big! How long did it take them to build it ?

I agree with John because I could never imagine me building the Great Wall of China. And if I did try to build it, I would probably just fall off a mountain or something.

Those bikes and the wagon attached to it was something I wanted to ride on when I was in China, but I didn't get the chance to though. Instead I rode on taxis, motorcycles and cars. It's probably really fun since it's like getting special service during the ancient China period.

John, thanks for making me ride with you in your article. You actually did a great job to make the reader feel like he/she was with you on that trip and also another point of interest id your acknowledgement of teachers

Great job John and thanks for sharing your experience with us all ....Oliver -Ghana West Africa