Daniel: Travel Shows There is No Need to Fear China

Article #11 in the Student Travel Stories Series from our tour of Beijing, China.
By Daniel, Age 17, 11th Grade in Boston. Born in the U.S. to parents from El Salvador. 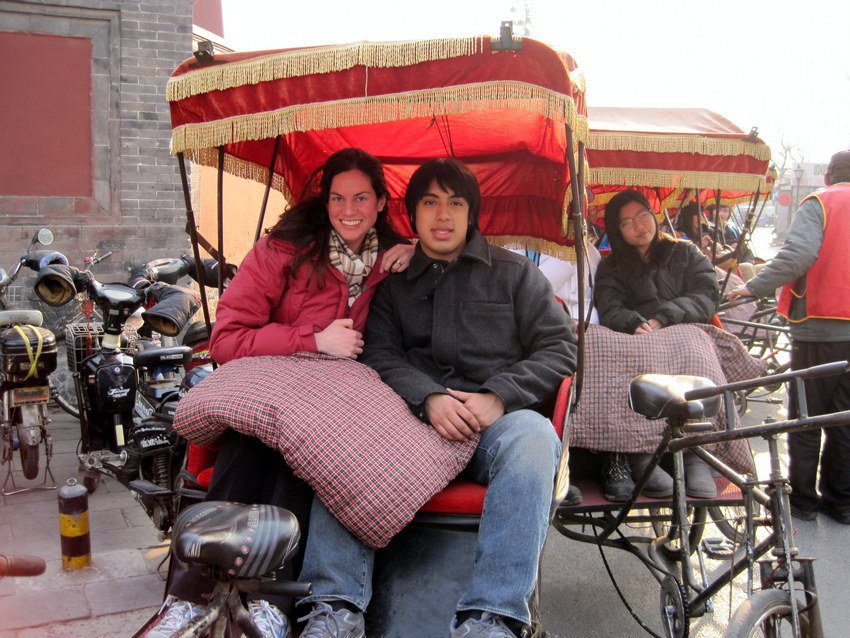 On a rickshaw tour of the Hutong neighborhood of Beijing.

Q: What message about China are you bringing home to America now that you’ve traveled to Beijing?

A: I will try to convince people we shouldn’t be afraid of China.

Sure it’s a country that is progressing fast, but we can look at our own country, especially during the Industrial Revolution when we expanded so quickly we could barely contain ourselves, and we can see that China is going through the same thing, just at a later time period. Progress is not something to fear.

Q: One criticism of China is that it represses freedoms. What’s your take on that after visiting?

A: Yeah, it’s kind of shocking that people in China don’t have as many liberties as we have in America, but once you understand why China’s policies were created, it makes more sense. 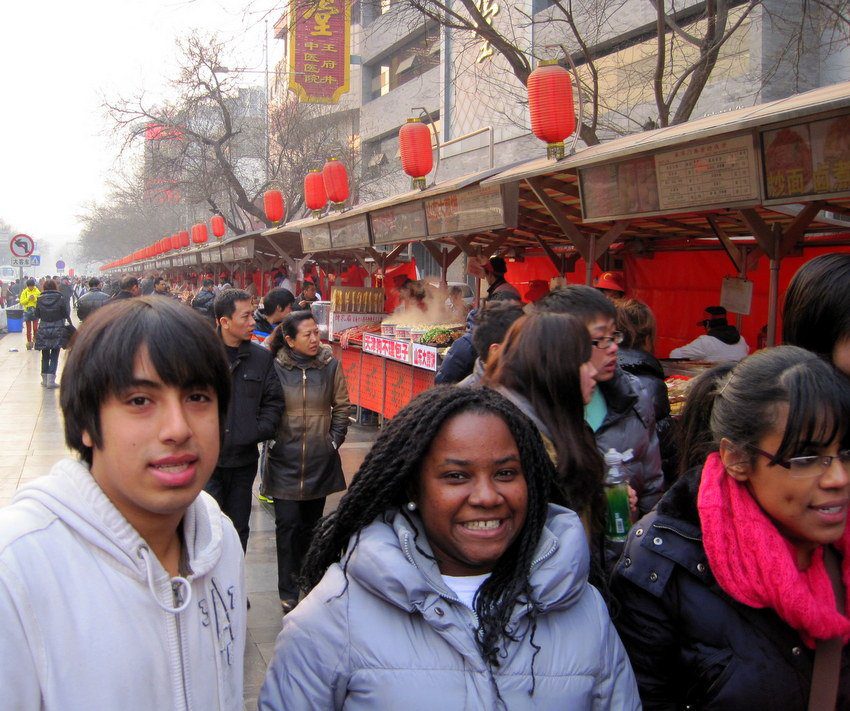 Daniel and a Boston classmate at Beijing’s Night Market.

For example, many people are shocked by the One Child Policy, which mandates that Chinese people have only one child. However, the population of China is 1.3 BILLION, while the population of the U.S. is 300,000,000, and so China needs to limit its growth or it won’t be able to sustain. Anyway, since its start in 1979, the One Child Policy has has prevented China from giving birth to over 400 million new babies: an entire U.S. population! That’s an important policy.

As for Internet censorship in China, our guide explained that China censors Facebook and Twitter because misinformation can be disseminated so rapidly online, that with a country as big as China, it can be dangerous. The purpose of the censorship, he explained, is to prevent mass chaos and hysteria. But our guide said they don’t miss those sites very much because there is a Chinese version of both, so people don’t feel they are missing out. The only difference is that the government can control those sites.

Q: What were your favorite parts of our China tour? 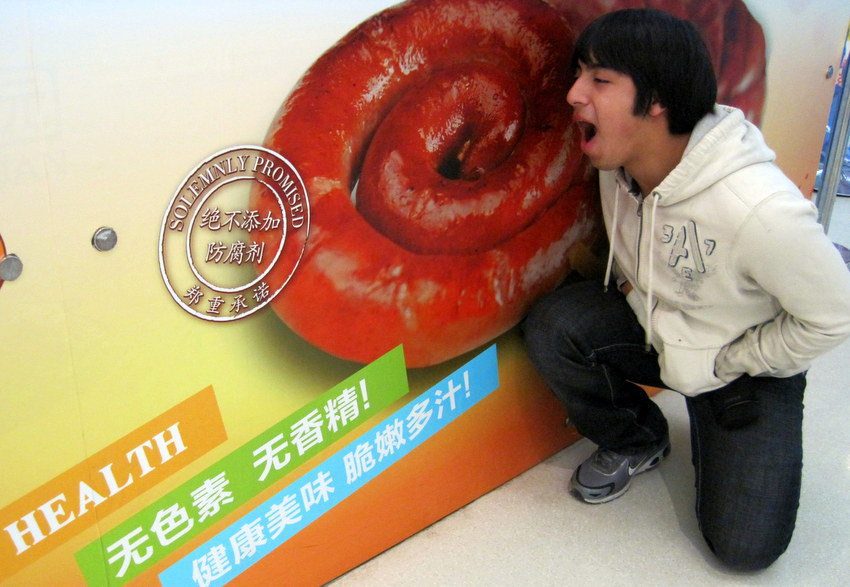 This ad made us laugh so hard: “Health” Sausage?!

A: Every time I go to a country, I love the food, and Chinese food was some of best I’ve had!

I also really liked the part of the culture that emphasizes mutual respect and “Face”, which in Chinese is called: Mianzi.

I LOVED the recreational park we went to (Temple of Heaven Park) because we saw people actually being active. You didn’t hear people say, “No, I can’t go outside because I’m too fragile” like they do in America. The thing is, people stay fragile unless you introduce them to something that challenges them or maybe even gets them hurt. Pushing yourself makes you a great person, and helps your body stay fit!

The kids in China seemed happy to be outside, too. In school they’re not just inside testing; instead they do morning exercise every day, while here in America we are taking recess away from kids at the mid-point of their lives when they really need to burn off energy. We wonder why people are getting obese in our country, when in reality we created our own problems… and just blame other people for them! 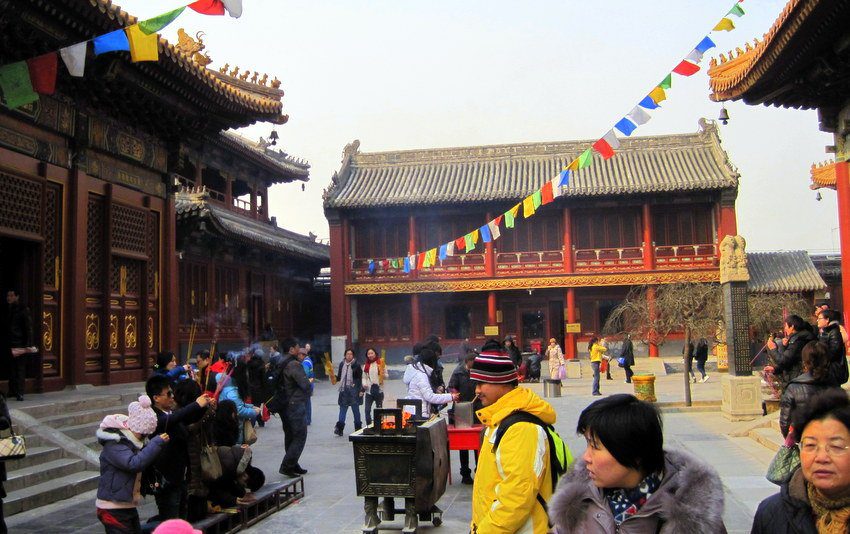 Lama Temple: A mix of people praying and tourists admiring.

Q: What was your favorite historic site we saw in China?

My favorite activity was touring the Hutong area (very old, historic residential neighborhood of Beijing) because it showed how even in modernization, the Chinese are still trying to keep their old way of living. In the modern part of the city, no one knows each other and everyone is afraid of their neighbor because the media keeps saying everything is dangerous. Sure, the world is dangerous, but it always has been, and just being afraid of it isn’t going to make it better. Actually going out into the world and mixing with people does so much more for you and for them than being afraid. In the Hutong neighborhood, people were very welcoming, and they gave us great hospitality.

Q: What were some things you found difficult during travel around China? 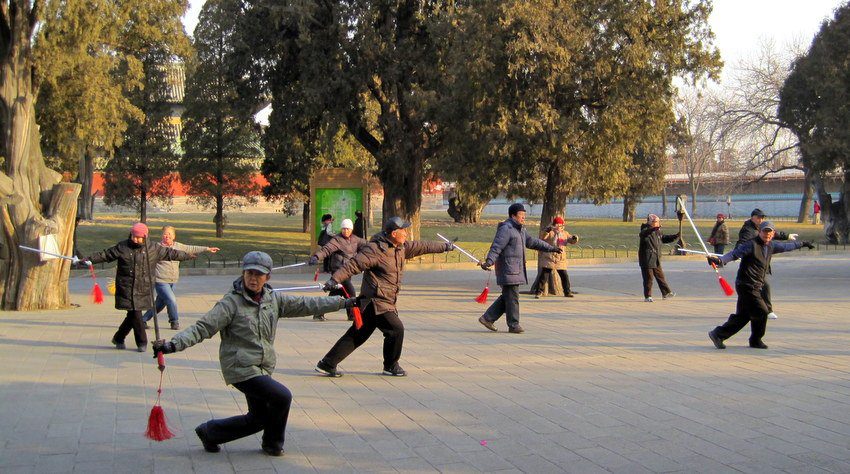 People of all ages exercising (with swords!) in a Beijing park.

A: Using the squat toilets! But if you don’t do it, you miss a great experience. A couple of times I almost fell backwards and had to grab onto the bottom of the door.

I didn’t like that there were poor people working as street vendors everywhere we went, but you have to respect them because they try very hard to put food on the table, just like many people in America do. When we’re in the mindset where we see one government as better than the other, we just see flaws, but then once you see past that, you can see everyone’s just trying to make a living. The American dream isn’t just in America; everyone in the world is trying to make it.

Q: What was different than you expected about China travel?

A: I arrived in China with the expectation that it is a culture very rooted in tradition and old customs, and that expectation was met. Now, I did expect there would be many buildings, but I didn’t anticipate the enormous quantity of modern buildings, nor how stoic some of them would be. I preferred the traditional buildings like those in the Lama Temple and Forbidden City to the modern ones.

One of many astoundingly modern buildings in Beijing.

Another surprising thing was that in China, you see a lot of signs in English. I thought that was very hospitable to tourists. In the U.S., the furthest we’ve gone is making some signs in Spanish, but that took so long to happen. That said, China still needs to make even more support for tourists, because it can be such a confusing place for outsiders to travel.

Q: Tell us a funny moment from our Beijing touring.

The Silk Market was crazy, seeing how the vendors developed linguistic skills just from bartering. They spoke to me in Spanish! To be spoken to in Spanish by a Chinese woman in China was so funny!! I heard English spoken by the vendors, but also Italian, Russian, and maybe even Norwegian. It was just amazing. And sometimes the vendors would say the funniest things. One vendor grabbed me and said: “I want to kill you!” But she didn’t say it with a true intent to kill– just with a smile to get my attention.

On a side note, I bought some excellent black silk pajamas at the Silk Market and wore them on the plane flight home from China. The pajamas inspire me to research more about Daoism. I like the sense of it.

Q: Would you ever live in China?

A: It depends for how long, Perhaps I’d like to do what my brother’s friend did and teach English in China, because I know I couldn’t experience all of China within my own lifetime. There’s just so much. But I’d be interested to live there for one year, just to see how life is there, full out… how things are in China without a tour guide. 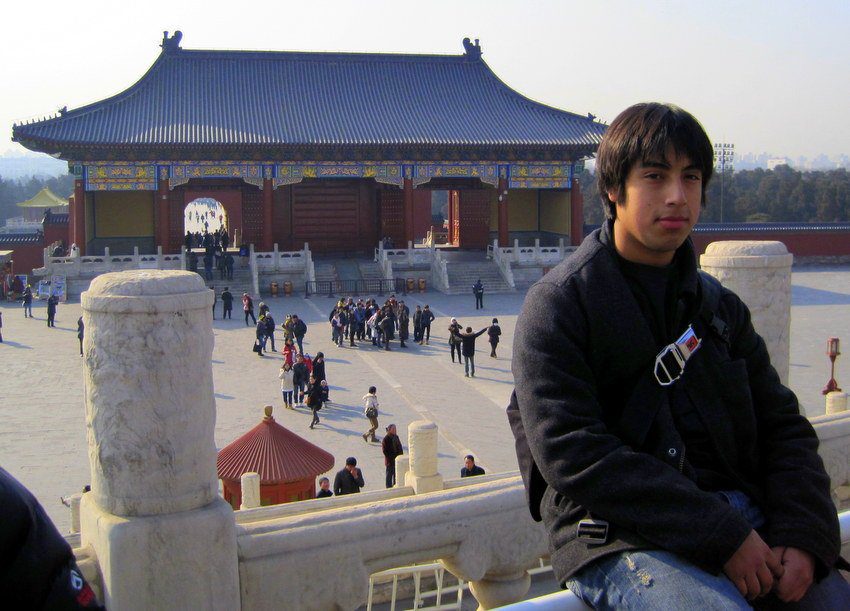 Daniel in a pensive moment at Tiantan Park.

Q: Was the price of this week-long China tour worth it?

Also, I’ve now gained many new skills. I can even identify Chinese, now, when I hear it spoken on the street!

Q: What words of wisdom do you have for students considering travel abroad?

A: I want to endorse the fact that it’s good to travel and meet new people. It’s good to go the entire world away, and the more difficult things are, the more you’re going to get out of it, if you try hard enough to make something out of every moment.

I disconnected myself from U.S. culture once we set foot in China and tried to immerse myself into Beijing as much as possible. I recommend students who travel try to do this. 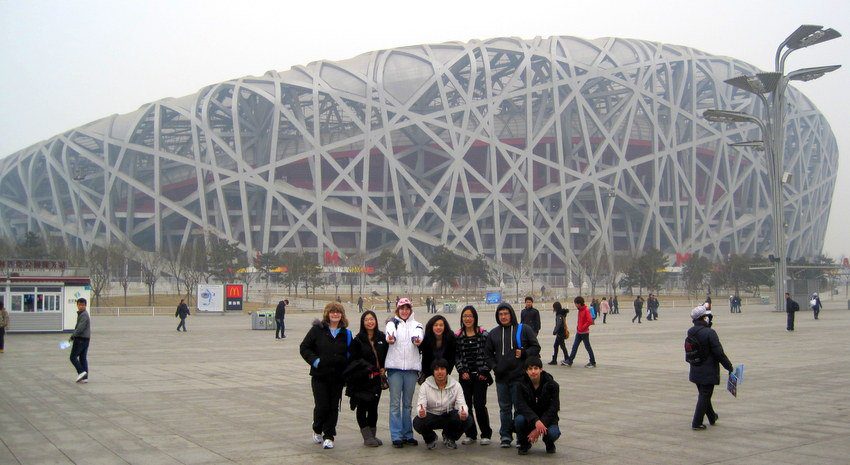 Daniel and travel buddies at the Bird’s Nest Stadium in Beijing.

It was fun to travel with Boston students, and being stuck on a plane for 12 hours and 45 minutes with the same people means you will have to make friends with them, or your whole trip will be a disaster!

You might think this interview is outspoken, but I’d rather be the most hated guy in the world than the quiet mouse. If you hold in your opinions, you’ll just be an old man full of regret.

Thanks, Daniel, and thanks, EF Tours! Readers, what questions or comments do you have for this young world traveler? 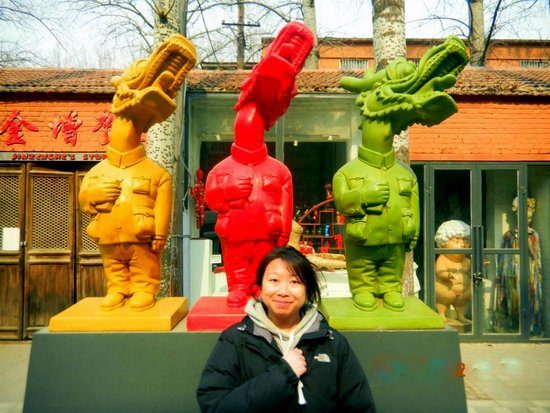 Terry: The 798 Art Zone Was The Coolest Place in Beijing
← Read Last Post 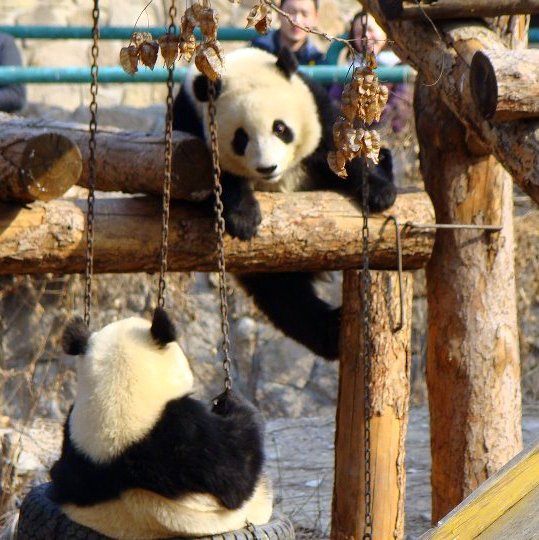 Rickshaw ride will be a must while travel in Beijing. You may go though the Beijing hutongs via the ride and discover more about the daily life of Beijing locals.

Yes, we loved it!

I think it's kinda cool that the Chinese people still follow their traditions. I know of this big temple in Quincy, that I used to go to, but I barely go there any more.

I do agree about Americans being obese but, I got recces token away at sixth grade. I thought that the recces was useless because everyone thought that being lazy was "cool." I think it would be the same.

I agree with Daniel. Chinese food is the best! One thing he didn't mention was Crab Rangoon. One thing I don't like about China is that there are a lot of people.

I think it would be amazing to teach English in China. It would be amazing to see the progress of all the children who don't know how to speak English very well. Also the similarities to Chinese vendors and the ones in New York is crazy. When I was in New York vendors were in the middle of the streets trying to sell things. And ,like Daniel explained, a small Asian lady came up to me and my family and began to speak Spanish to us and asked us if we needed or wanted anything. To me that made me laugh.