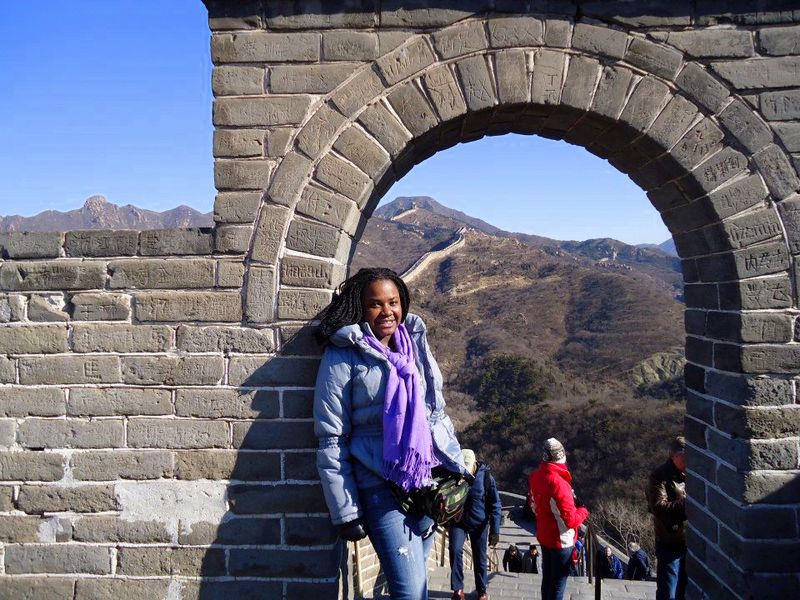 Stephane, triumphantly atop the Great Wall of China.

Q: How did you feel about our China trip?

A: Had anyone told me seven years ago in my little house in Haiti that in 2012 I would be across the world, visiting China, meeting amazing new people, and climbing one of the seven wonders of the world, I would simply have called them a liar!

My favorite part of the trip was The Great Wall, of course. It was surreal.

Q: Tell us what fabulous thing you did in Tiantan Park in Beijing. 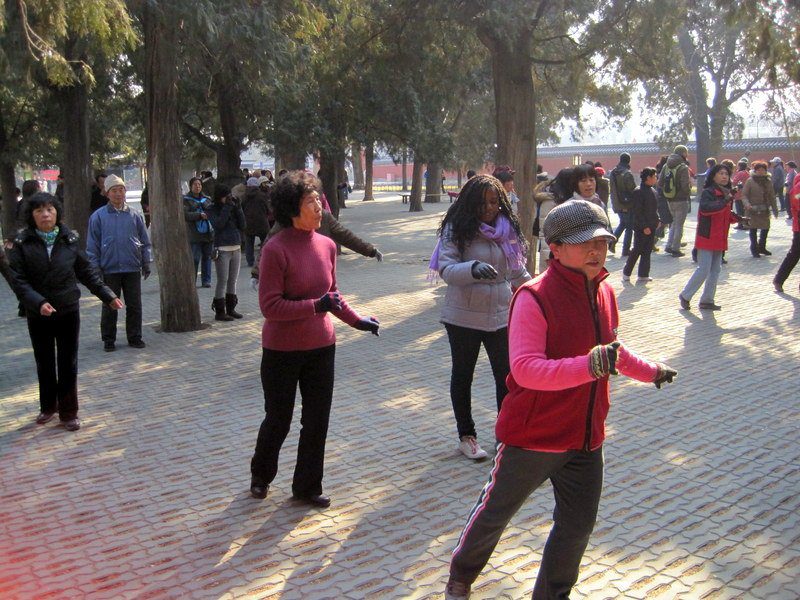 LOVE this photo of Stephane dancing to Britney Spears with locals during their daily exercise in Tiantan Park.

A: In China, people of all ages do exercise outside in parks, and one of the exercises they do is aerobic dance. The dancing in the park was amazing. The citizens were outside playing and being active, even though it was cold weather. The dancers all perfectly followed the dance moves of the leader.

At first they were dancing to popular Chinese music, and we watched. We were wondering if we should join in, and I really didn’t want to… but then Britney Spears’s “Oops I Did It Again!” came on!!!

THEN I HAD TO DANCE.

Q: That was one of the best moments of the whole trip! :) Now, what were some striking facts you learned about China? 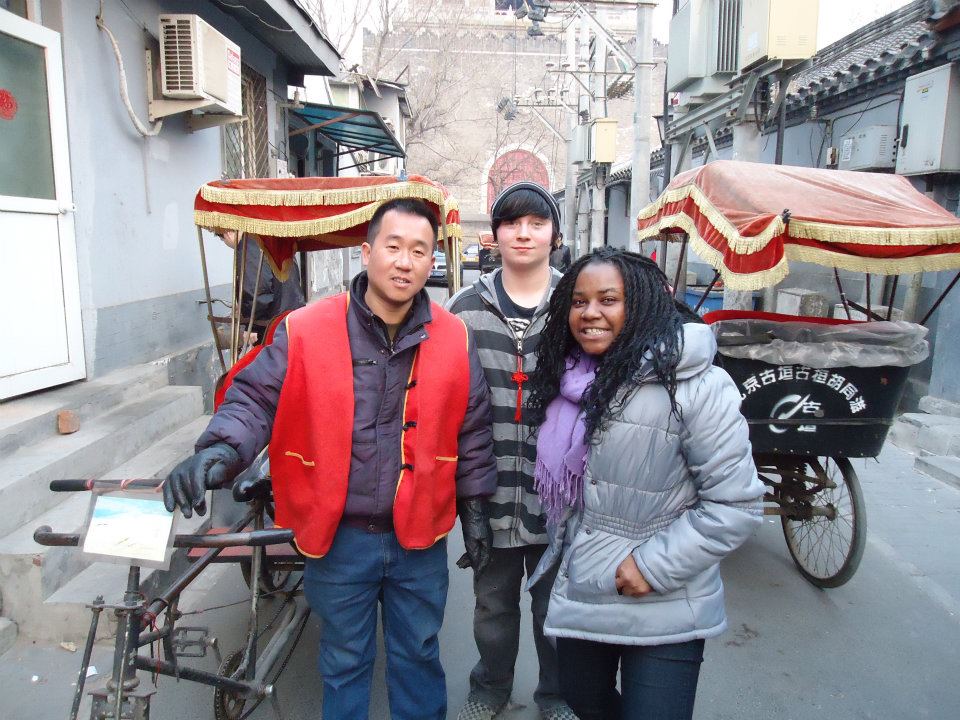 Stephane and Ryan (read his article right before Stephane’s!) on a rickshaw tour of a Hutong neighborhood of Beijing.

A: A fact that shocks me about China surrounds their One Child Policy, the 1979 rule (which is still in place today) that most Chinese families are only allowed to have one child.

Anyway, the shocking fact is that through this policy, China has spared itself of about 300-400 million new people by preventing those births.

Q: What was it like to travel with a big pack of Boston students? 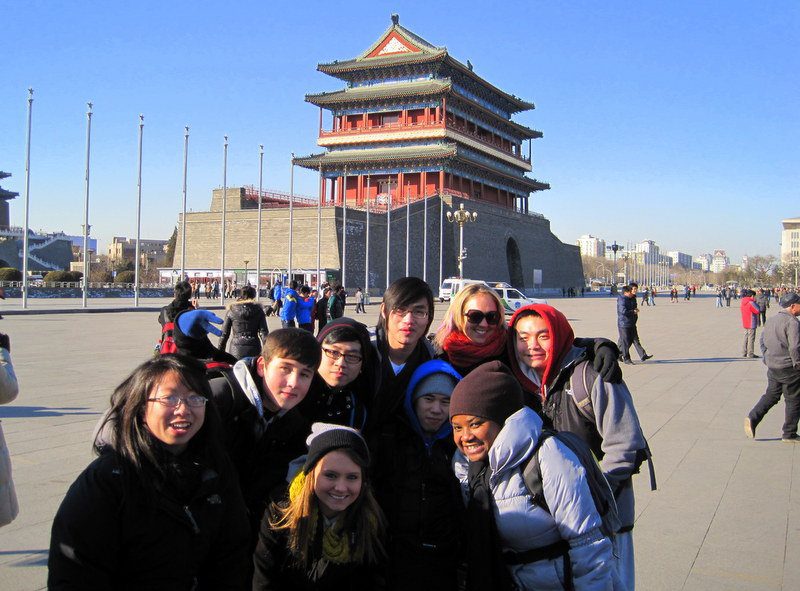 Stephane and friends by Tiananmen Square in Beijing.

A: The whole trip was funny. I was glad that it was not a Senior-Exclusive Trip or a Junior-Exclusive Trip, but that all the grades of high school students were allowed to come. We had ninth graders to Seniors, and everyone collaborated and got along with each other!

Whenever any one of us got sick, all of us would know immediately. The next morning, that sick person would not go ten feet without someone asking, “Are you feeling better?” or, “The sleep did you some good!” or, “You look much better.”

That was the most inspiring thing to me: That feeling of traveling thousands of miles to see such caring in people. I go to the same school every day with these students, and I never knew how caring, funny, and kind they were. That part of the trip was what opened my eyes to our school’s thriving community. 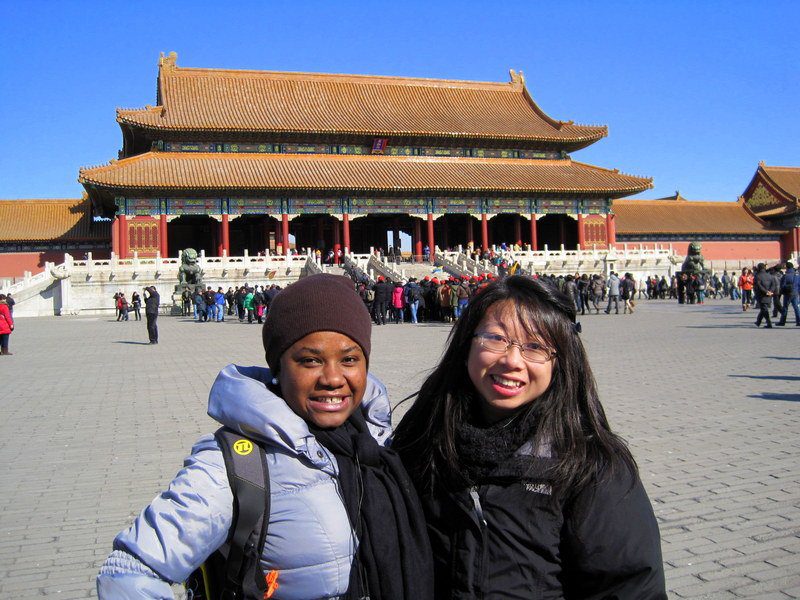 Stephane at the giant Forbidden City.

Q: You also really liked having dinner with a family in the Hutong (old fashioned) section of Beijing. Tell us what that was like.

A: The Hutong neighborhood people were very nice and they treated us very well. I could not believe how nice and in harmony everyone lived with one another, and our guide, Daniel, was super funny.

Q: What closing thoughts do you have for your readers?

A: I WANT MORE. We came back too soon!

I wish we could have a summer trip or something because I would absolutely love to learn more about China. I really hope we can go somewhere else next year. (Ahem, ahem… teachers at my school, would you please help us set up another trip??) Anyway, thanks for wonderful travels! 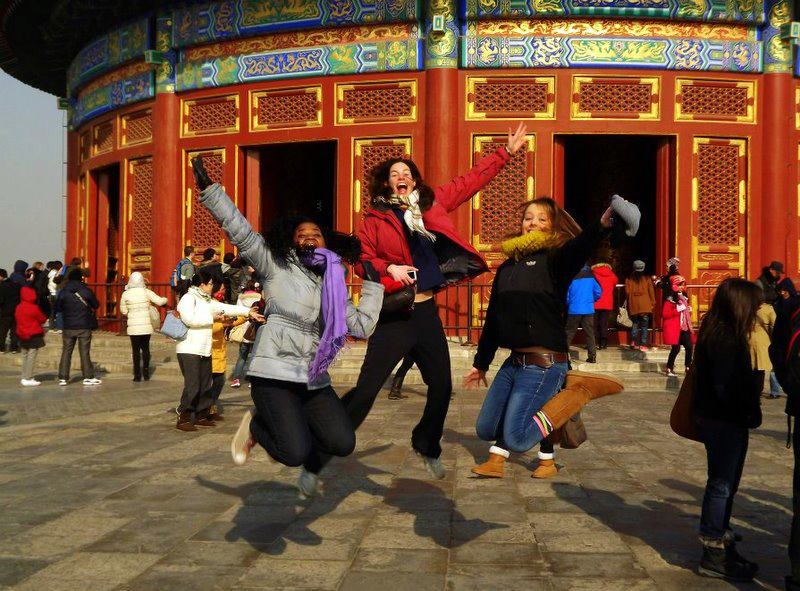 Such joy! Jumping at the Temple of Heaven.

Big gratitude for sharing your story, Stephane, and thanks, EF Tours! Readers, what questions or comments do you have for this wonderful, world-traveling young woman?

How to Use Study Abroad and Student Programs to Travel When Money is Tight - Teaching Traveling!

[…] the traveling side, I really started traveling in 11th grade in High School where I went on a school group tour to China (Beijing and Shanghai). From then on, I was bitten by the travel bug, and have been to eight […]

I am commenting about four years later, but what an amazing story. I too believe in the power of travel to transform the lives of students of color. I ventured to take 10 students all of color and with disabilities on a trip to Japan. It was transformative for me as an educator and a person.

I wish I could live in China. I would like to live in China because, I love Asian cloture, sushi, anime, cute stuffed animals.

I liked reading about your trip to china I thought it was interesting reading about how china has a rule about having only one child, also they spared themselves 300-400 people by preventing those births, and China is the same size as USA and it has more people china has 1.3 billion people and USA has 300 million.

Climbing the Great Wall was awesome!!!. An experience that I will never forget. Haiti and China ARE two different places, and the customs are very different. My great grandmother had over ten children in Haiti, however in China that is a big violation according to the laws. I hope to visit more wonders of the world!