Article #8 in the Student Travel Stories Series from our tour of Beijing, China.
By Ryan, Age 16, 10th Grade in Boston. Born in the U.S. to parents from America. 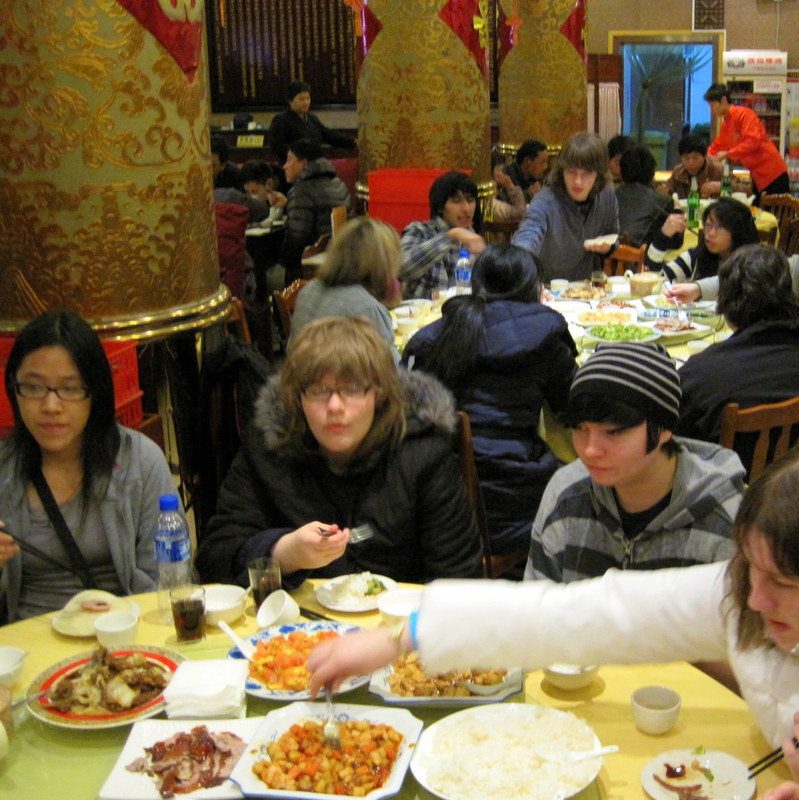 Delicious food in China, even for vegan student, Ryan (on the right).

Q: Ryan, you’re not just a vegetarian, you’re a vegan, meaning you don’t eat dairy, eggs, or meat! Was travel in China hard for you as a result of your diet?

A: Actually, nothing about our China trip was difficult! Before I arrived in Beijing, I was worried there would be few vegan options for me to eat, but I was really surprised by all the tofu and veggies for every meal… even breakfast!

In the U.S. you really can’t get tofu like that, and in fact, at home there are fewer vegetables than I saw for food in China! In Beijing, it was refreshing not to see fast food everywhere. Sure, there was KFC and McDonalds, but not as many as in America.

Another interesting thing was that in the Chinese-style Beijing restaurants, there wasn’t American-style “Chinese” food like we eat in Boston. I didn’t see Crab Rangoon in Beijing!

Q: What was something shocking about China? 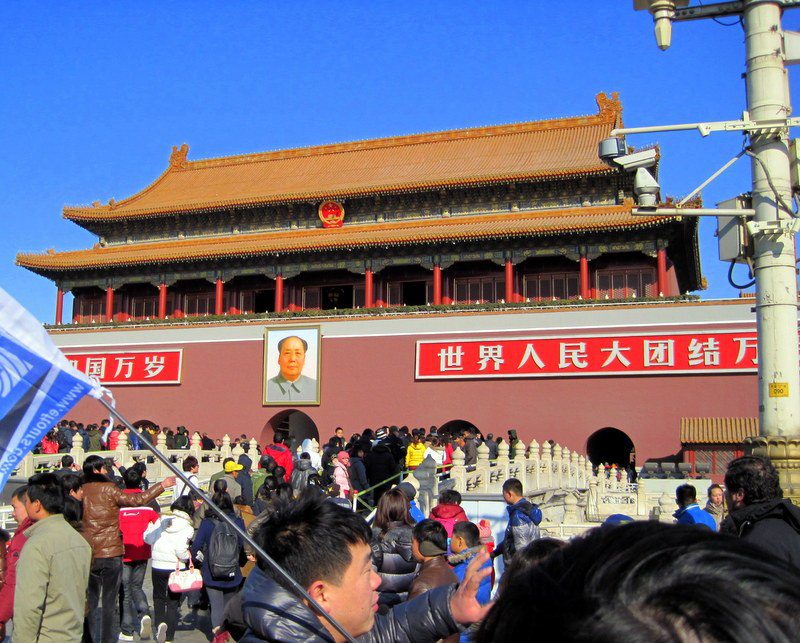 A: I thought it was fascinating that Mao was EVERYWHERE. Pictures of him were on building walls, on streets, and even inside houses we visited.

The fact that there were surveillance cameras everywhere was also surprising. We say in the U.S. that “Big Brother is always watching.” Now, in China, it seems that’s really true! In Tiananmen Square we saw one pole with over 5 cameras on it! That was ridiculous.

Q: What was the best part of the trip for you?

A: I liked the Hutong area the most: the really traditional neighborhoods in Beijing where they live in small houses with shared community bathrooms.

I thought it was really cool how no one locks their doors there, because everyone has each other’s back. It kind of reminded me of my neighborhood, Southie (South Boston), because we all watch out for each other. 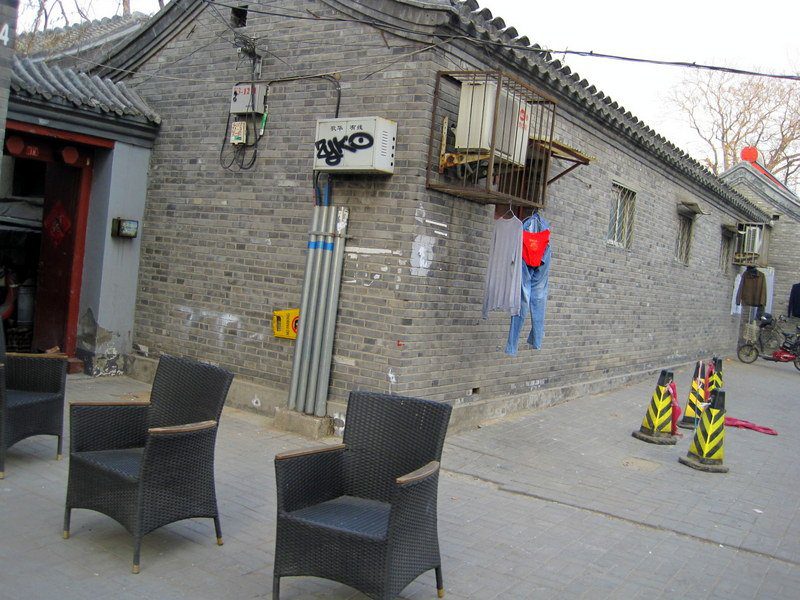 We ate dinner with a local family, and I thought it was really kind of our host to let us explore his house and explain everything, and even cook for us. The Hutong was my favorite part of the whole trip.

Q: What was your favorite historical site?

A: I liked the Great Wall the most, because it was not what I expected it to be. I didn’t expect it to be so steep! I imagined it as mostly flat, but I was surprised when I saw how intricate it was! There were times when we were running up hills and stairs and times when we were walking, out of breath.

Q: What surprised you during our exploration of Beijing?

A: The persistence of the vendors! The vendors didn’t want me to leave… they really wanted me to buy things like that little plaque that said, “I Climbed The Great Wall”. I just kept walking away, but they kept grabbing my arm! 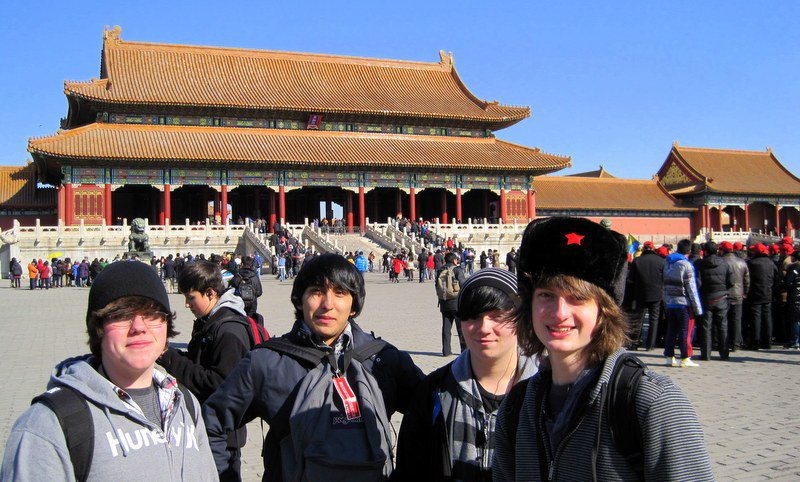 Ryan and friends at the Forbidden City in the heart of Beijing.

So then I decided to be strange, myself. I started hugging random strangers for fun! I’d never see these people again, so why not? They usually laughed and reciprocated.

Q: What did you think of the squat toilets?

A: I didn’t use them because our hotel had sit toilets! The idea of squat toilets is so funny, because it’s so different from what I’m used to. When I first heard about them I thought it would be 100% everywhere in China, but some places had U.S.-style toilet seats.

Q: How was it traveling with a big group of Boston students?

A: At first I wasn’t sure how it’d be. Would it be uncomfortable? But then I got really used to it and made friends with basically everyone. Now I feel comfortable with everyone! 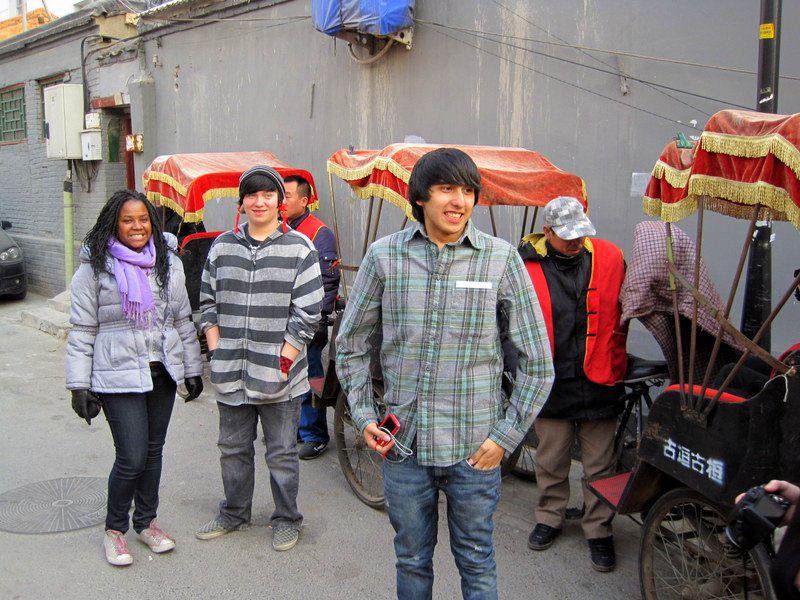 On a rickshaw tour of the winding Hutong neighborhood.

Q: What advice do you have for students considering travel?

A: I’d say go for it and travel because you never know what to expect, and you can’t judge an area before you go for yourself and see. Travel can be pretty life changing.

Q: What changes do you see in yourself after your journey to the other side of the world?

A: I’m more grateful to live in America because we have more freedoms, and we don’t have to work crazily the way a lot of people around the world do, like the street vendors. It’s really unfortunate what some people have to do.

Q: Did you miss home in the 9 days we were traveling? 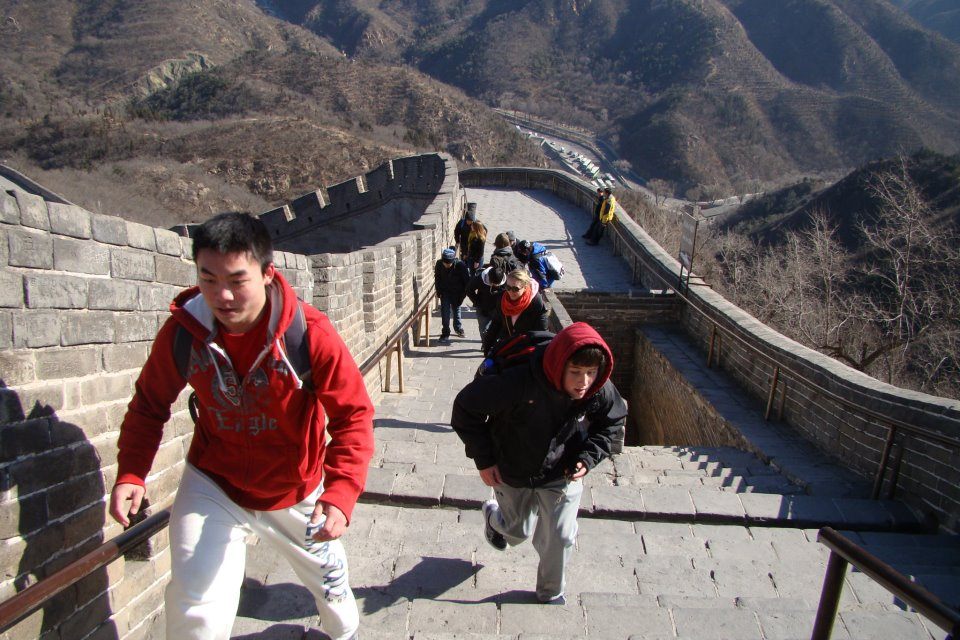 The Great Wall was so much steeper than Ryan expected!

A: No, I had the opposite of homesickness: I got really absorbed in China.

I kind of liked living that way, even if only for a week. I loved the food and the restaurants, and moving around so much, doing so many different things in one day!

Thanks, Ryan, and thanks, EF Tours!

Readers, what questions or comments do you have for this world-traveling vegan?

It’s so inspiring to see people stretch their comfort zones. Ryan did just that by setting off across the world not knowing whether or not he’d be able to eat anything at all! 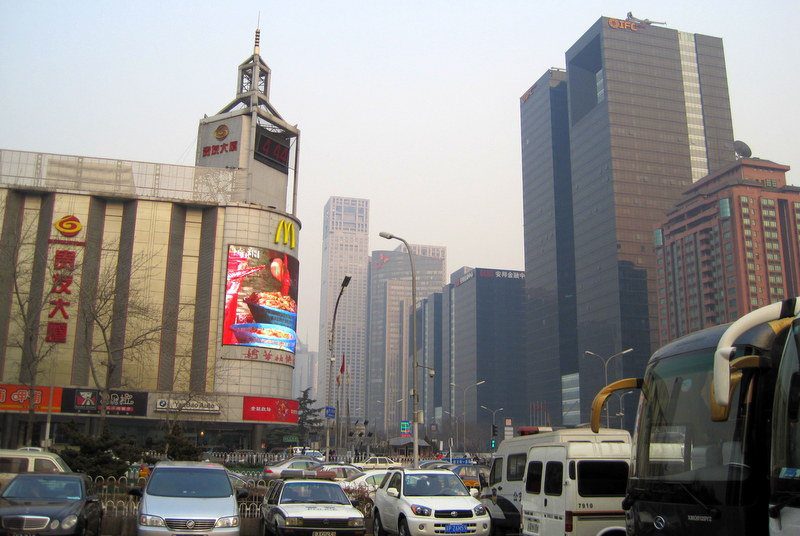 There’s vegan food in China, and there’s McDonald’s, too!

Want to read more about world travel as a vegan or vegetarian?

Click here to read about the CRAZY things my vegetarian fiance ate to train for our China trip (and the things like chicken feet that he ended up eating once there)!

Click here to read about a U.S. Thanksgiving, vegan style.

Eat well, whatever your diet, and wherever you are!

It sounds interesting and difficult to be vegan traveling internationally. I'm glad to hear that China has less fast food than America, the surveillance there seems pretty tense though. Glad to hear that you had fun nonetheless!

Oh my gosh Ms. Marshall! Your website is the first thing that pops up when I Google Imaged "McDonalds"!!! Congratulations.

I never knew that. But your website is so popular, I am sure it would be on the top of the list even without the algorithms.

Google altered its algorithms so it will put search results created by people you've emailed with ahead of strangers, so since you and I have emailed, you're more likely to see my results first. That said, there are some Google searches for which I'm #1 in the world, whether or not I've emailed with the people. Such searches include: - traveling teacher - ants eating toothpaste - naked Chinese man belly :)

I could never be a vegan, because I love meat. I learned that they don't serve the same "Chinese" food as America. The food in America is fattening.

I'm really shocked about how many food choices there are for vegans!

China is really cool. There is a lot of pictures of Mao. My mom believes in him, but I don't. He used force to change China! That's rude.