One of the chief reasons some people curse / hurl soda cans at folks who travel extensively is the assumption that travel cost Megabuck$ unattainable by the average lad or lass. While sometimes this is true, peruse the following list of both obvious and startling get-richer schemes and consider: the money for your big trip may be closer than you think.

1. Car Shmar.
A recent study just came out that one saves $12,632 a year by using public transport instead of having a car. I utterly believe this because it is almost the exact amount I’ve been able to save each year. That is to say: if I had chosen to have a car I could NOT now be taking this Round the World trip at all!!! Also, duh, walking instead of taking a car –> tighter gluteus maximus ;) (Anti-Car article at: http://www.boston.com/news/local/breaking_news/2009/05/transit_ridersh.html )

2. DO travel during your vacations.
“But I don’t understand,” you squeal. “How can you SAVE money to travel by… traveling?” Very simple: Developing Countries (aka, the Third World) are ridiculously cheaper than the U.S. The hotels and hostels I’ve patronized in Peru, Mexico, Guatemala, etc. were often just $5 a night (or free if you’re volunteering!), and meals could be around $1-$2. The bottom line is that when I’m home, I end up spending almost triple what I do when I’m abroad. The savings REALLY add up if you make sure to sublet your apartment/condo while you’re away! 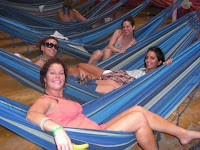 Disclaimer: You may have to rough it a little, which is all part of the excellent experience. For example, in Costa Rica (a more expensive Latin American country), $5 a night got me a hammock in a huge tent of 100 hammocks by the beach. Still pretty awesome!

There are TONS of volunteer and work opportunities online. My dear friend and I had a bleeping fantastic (and free!) summer volunteering in a school in Peru and living with the school administrators… all because of a CRAIGSLIST ad my friend followed up on! (Yes, it is pretty fantastic that this wasn’t as sketchy as it sounds… We met first several times with part of the family living in Boston to read our skeeze-o-meters!)

There seem to be an abundance of big Volunteer Abroad companies that salivate to charge you $2000 for a few weeks of “Volunteering”. Although some people have loved this option, my advice would be to seek out the smaller opportunities (word of mouth works very well, as does Googling a specific country or job and “volunteer”), OR call the companies and say “I am not rolling in money now because of ___, but I have ___ to offer in terms of skills, and I am wondering if you offer any scholarships. Sometimes works!

4. Go into teaching.
Every year I ask my students, “Who is interested in becoming a teacher, for a career?” Audible guffaws are heard, and the one kid at the back who has been pondering raising her hand lowers it and mutters, “Y’all don’t get paid at all, and anyway kids are mad aggy.”

“INCORRECT!” I always holler. While, compared to fancy computer folk or, say, Madonna, teachers don’t get paid a CRAZY amount, I would like to point out an important fact: My starting salary as a teacher (after earning my Masters right out of college) was FAR above those of almost ALL of my friends. Although doctors and lawyers ultimately earn $100,000 a year and above, remember that they spend 3-5 years after college in (expensive!) school before they earn anything at all. We celebrate all career paths, but I’m just pointing out that I started earning right out of the gate, and was able to save a nice amount while my lawyer and doctor friends were still deep in student loans. (The fact that kids are “mad aggy”, or verily aggravating, cannot be disputed, but they are also mad awesome and hilarious :) )

Moreover, after 6 years of madness and glory in Boston schools, I can declare there is no other job with such great vacations (and opportunity to positively impact the world, of course). Imagine this: you’re lying on a rainbow-colored towel on Ipanema Beach and you suddenly realize… it’s Friday, so you’ve just gotten paid for the past two weeks of packing large amounts of Brazilian food and sun into your body. Two months of paid vacation, baby– during which you could even get a second job! Despite the recent awful layoffs, a teacher is always (internationally and nationally!) marketable.

Disclaimer: Teaching is a VERY difficult job (especially at first!), but the ultimate gains are so lovely!

5. Buy clothes… in your friend’s musty closet.
As the furious student stormed out of the room, he glared back at me to see what final insult he could hurl. “Those aren’t New Balance,” he finally said, pointing to my ratty sneakers, “Those are OLD Balance.”
Over the past six years, I’ve tried to keep my appearance as professional as possible at work, and as beautiful as possible at play, but the truth remains that I saved a good chunk of change by clothing myself in 99% secondhand clothes from my friends. I mean, we live in the land of plenty, and we all have WAY too much stuff. Clothing communism now! Share the love and the shirt and consider monthly Clothing Swaps.

Want to save money? Want to travel? Please note that it’s 300 to 1 million times harder to see the world and save the loot to do so if you have a little one. To a much lesser extent, this applies to pets. If a baby or a pet will give you great happiness, mazel tov! However… you know what I mean.

7. DO eat out/ buy that thing you want!
If you’re always saying “no” to tantalizing things in order to save money, you are eventually going to be too depressed to even get on that plane at the end of the year. Figure out what luxuries make you happy and never let ’em go! It all balances out if you cut the other stuff.

8. Distract yourself.
Tempted to blow all your money on lame stuff? Do something else instead! Work long hours, take on crisis-prone friends who need you to listen to them for hours, find a boyfriend/girlfriend, exercise extensively, go to bed early, write a blog… whatEVS. Just admit that a two-year-old told “No! You can’t do that!” will cry hysterically, but a wee one given something alternative to do will gladly rock that second thing out and forget about the first temptation.

9. Pack your home with roomies.
This one is maaajor. Rent is a huge expense, as are non-shared utility bills. If you really want to travel but also really like walking around your solitary pad stark naked, think long and hard about what you desire the most: daily indulgence or a long-distance prize of extra money to see Machu Picchu? Roommates save loads of money.

Come to think of it, my brother has managed to have the crazy rent and still see Machu Picchu this summer. How? He followed up on a muttered comment by a woman during a conference that she was leading a youth trip to Peru and might need a co-leader. My sweet sibling exemplifies this final formula: Some frugality + Some indulgence + Some desire to make @@@@ happen –> the hills of Peru are yours!

That’s MY little bag of tricks. What’s in yours?

OK, well you know how I feel about #6. I have two kids and we travel more now than we ever did before. Yes, they cost money, but we learned to cut back on a few luxuries we enjoyed pre-kids so that we could keep on traveling. Instead of stock piling loot and crap in our house and working our butts off at jobs we hated, we now take all our vacation time so we can hang with our kids a little more. Kids won't stop your travels if you don't want them too. Heck, they help us push past our own personal fears everyday and try new things.

This is so good to hear! When I wrote this in 2009, I was frustrated because of circumstances surrounding me which have now shifted. Since getting married in July, my dreams have shifted to travel AND kids, and it is wonderful to hear that your kids HELP you see the world!

i can relate to this.. except maybe the 2nd point :D go figure :)) but i do agree that everyone should be able to travel whichever part of the world she/he is located

Well, I will certainly be cross-posting this on http://metacognition.tumblr.com/

I am so excited about all these tips! I'll throw down my own two cents:

1. Watch the top of your mountain, not the rocks in your way. In other words, it's easier to do anything if you keep the goal in mind above the smaller obstacles. When I was trying to study abroad during undergrad, I didn't think I would be able to afford the five months in Australia. Summer jobs had been hard to find after the financial crisis, and even harder when you were going to miss half the summer due to traveling. But I made up my mind that I would go. A few hours after that decision I received an email saying that I had snagged a short-term summer job and a separate email explaining that I had received a travel grant for agreeing to blog about my trip. Things have a tendency to work in your favor if you keep your goals in mind.

2. This is a smaller tip. If you take all of the change from any purchase you make, or check you cash, and put this money in a bag for a year, you can end up with a substantial amount of money saved. I did this for all four years of college, and every summer I was able to roll that change up into $75 - $130. No, that will not buy you a whole trip, but it could pay for a few nights camping and hiking in the White Mountains!

I love these tips! Thanks, Grace!

- If travel is your passion, it will happen. My mantra is â€œpay for experiences, not for things.â€

Amen. My secret for traveling the world is to find jobs teaching English abroad. I've taught at public schools in Japan and France. Actually, teaching is not my passion, but I've had fun working in both Japan and France.

Great tip! I am sending you the interview questions for http://www.TeachingTraveling.com now :)