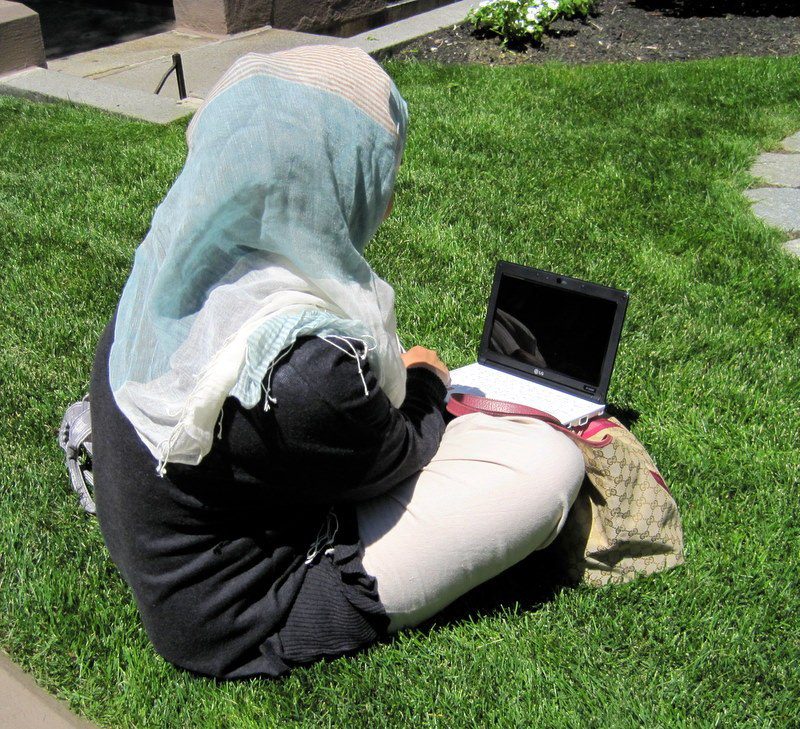 The author demonstrating her computer skills outside our Boston language school!

Waiting, waiting, waiting… waiting for the new episode of the new season to be downloaded! So exited and so curious what will happen next!

I was in my pink “girl” room on my heavenly bed surrounded by pillows, freezing under my blanket, somehow unable to lower the air conditioning. Popcorn smell was all over the room and a big glass of iced tea sat by my bed, as I waited so patiently… for the new episode of Gray’s Anatomy to be fully loaded.

I was 21 years old in my beautiful city of Jeddah, Saudi Arabia, living in a house with my parents and my two younger brothers. I have two married sisters who live near by our home, and we LOVE watching Grey’s Anatomy. We also watch other shows together such as Desperate Housewives.

I was on my third year at law school in King Abdullaziz University, and of course I was busy with my studying… but I couldn’t resist watching my favorite TV show ever!

Yesss, it’s downloaded! Ohh, the excitement! The rush of feelings! I opened the new episode instantly and started to watch. It was the third season of the series. I wondered if Derek and Meredith would ever get back together.

Indeed, by the end of the season they did reunite! But I was really sad for Izzy because her fiance died by heart attack right after proposing to her.

All countries have differences, but life in Saudi Arabia is deeply different than here in the U.S. where I am studying English. Here in America, it is legal to drink alcohol and it is legal to go out on dates with men. But in my country, or let’s say, in my religion (Islam), it is prohibited to do these things.

My country’s rules are based on two things. The first thing is our religion, or as we say, Shareea (in Arabic: الشريعة). The second thing is our society’s customs or unwritten rules: laws based on customary behavior. Both elements are powerful enough that Saudi Arabian Judges consider each when giving final decisions.

The prohibitions on drinking alcohol and going out on dates are examples of laws driven by al Shareea, our religion of Islam. But the prohibition in Saudi Arabia of movie theaters and women driving cars is based on customary societal rules, or the “unwritten law.”

Now, as we all know, customs change with time. While the majority of people in Saudi Arabia are not yet ready to accept the idea of a women driving a car, nearly every Saudi family has its own driver and private cars, so we don’t have to worry about parking! And life goes on.

Even though we don’t have movie theaters, our homes often have a plasma TV screen with a theater system that family and friends can gather around to watch. I do think that movie theaters and women driving cars are changes that are going to happen sooner or later, but in the meantime, I believe that my country is taking big steps towards excellence in many different fields such as education, health care and more.

Inside the author’s room

Back to Grey’s Anatomy. In Saudi Arabia, we watch a lot of the popular TV shows that air in America, such as Lost, Prison Break, and Friends. We also watch all the American movies while they are still being played in the cinema because we download these shows and movies by “Torrent,” which its a file-sharing system between computers around the world.

Using this program is illegal here in the United States because it is a violation of Copyrights. In my country, however, people don’t think about Copyrights as much as they do here, or maybe people don’t know about them. Regardless, in Saudi Arabia there are still not enough punishments that people will fear breaking Copyright laws, and so we download shows all the time.

Tragically, when I came to America, I was so worried about Copyright laws that I erased my entire collection of TV shows and movies. I felt heartbroken when I did it because Internet in my country is slow, so it took me so much time and effort to download all of them… and then I had to erase everything with the click of a mouse!

Some people have asked whether we have American TV shows and movies on normal television in Saudi Arabia, and indeed we do, but they all air maybe a year or two after they come out in America, and they are heavily edited. A lot of people in my country, including teenagers, ladies, men, and even children, want to be up to date on these shows and don’t want to wait years to watch their favorites. And so we download them online instead of being left out!

The world is becoming a small village, and we are all connected through the Internet. In Saudi Arabia, we find our ways to be connected!

Lillie’s Note: This article has reshaped my entire understanding of Saudi Arabia, and I am so thankful to the author for enlightening us! Please leave a comment or question for Maryam, stating your geographical location.

If I could not drive, I would try to get a boyfriend to drive me places right away. (Well as soon as I can get one.) I would not choose some random person though.

This reminds me of watching Korean dramas. I wouldn't have even thought Saudi Arabian people knew what Grey's Anatomy was. The world's not that big after all.

After reading this article I think life in Saudi Arabia seems better than here in America! I think that because they don't have to worry about parking the cars because they don't drive it. Also they have their own family to watch the movies at home instead of the theaters. I do disagree with the fact that Saudi Arabian women can't drive because I think woman and men should be treated equally in every country. All and all this article was really interesting and I enjoyed reading it.

That's cool that in Sudi Arabia they have their own family room to watch their favorite tv shows or movies. This is good because it replaces the bad thing about how Saudi Arabia doesn't have a movie theater. I still think it's not fair how Saudi Arabian women aren't aloud to drive!?!? I know they don't have to worry about parking since they have a driver for them who drops them off but I think that's unfair and women and men should be treated equally in every country. I do think it's good though that they don't drink alcohol there and that proves thier laws are strict and discipline. All and all I though this was a great article and I really enjoyed reading it:).

I was shocked to learn that there are no movie theaters in Saudi Arabia, and that woman are not allowed to drive!