In the summer of 2022, I visited Merida, Mexico in Yucatan State for nine days with my eight year old son, my dear friend, and her six year old daughter. Our main purpose was to introduce our children to Spanish in the way we’d learned: Spanish immersion.

Our ulterior motive, however, was to bask once again in the country we’ve loved traveling through so much over the years: Mexico! What I found is that Merida is a very different city than any of the ten others I’ve visited in the country. Let’s explore why.

Merida is a Big City!

Though it’s nowhere near the 8.8 million person population of Mexico City, Merida is bigger than I expected: it has a population of 1.3 million people, counting its whole metropolitan area. Merida is the largest city in southeastern Mexico, and is the capital of Yucatan state.

Merida has a vibrant local culture, and is not overrun by tourists — though there are an increasing number of people moving there, thanks to how livable it is!

Despite being such a sizable city, Merida is one of the most polite and refined destinations I’ve ever visited. The word that kept coming to mind was: “genteel.” Everyone we chatted with was friendly, helpful — and loved kids, too.

I speak Spanish, and ended up having a number of truly profound conversations with the friends we made, very much appreciating their openness and love of education. Don’t speak Spanish? You still should be able to make do just fine, especially with the wonders of translation apps.

Something else I noticed about Merida: everyone we encountered was rigorous about making sure rules are followed correctly. For example, the month we visited, face masks and hand sanitizing before entering museums or restaurants was strictly enforced. Merida has an organized and orderly vibe!

Unlike the small towns in Mexico where I learned Spanish over two decades ago, Merida offers many of the stores and services Americans are used to. One can Uber around affordably, shop at Walmart, and eat at Texas Roadhouse restaurants, if so inclined. (I was not so inclined to partake in the American restaurants, thank you.)

Luckily, there are also loads of amazing local eateries, stores, and services, and we delighted in eating our way through all the food in Merida — a particular favorite being watermelon sorbet. Because the city is so big, there is a wide variety of types and prices for everything.

As you’d expect in a large, bustling city, there are plenty of modern office buildings and banks — but Merida also teems with fabulous colorful houses and historic architecture! As a lover of beautiful architecture, you can imagine my euphoria in experiencing the ornate structures I’ve photographed here.

There are so many great museums and events in Merida! You won’t lack for things to do when visiting with kids — or adults. Our favorite adventure for the young ones was the Palacio de la Musica, which features room after room of interactive exhibits about every era of Mexican music, from ancient times until today.

Did you know that approximately 60% of Merida’s population is of Mayan descent? This means that the city is rich with indigenous culture — from food, to clothing, to communication. Lovely! Speaking of indigenous history, many of the colonial buildings in Merida were created out of the stones from Mayan structures after the Spanish arrived in 1542.

My absolute favorite thing to do while visiting Merida was strolling the wide boulevard shown above: Paseo de Montejo. The tree-shaded street is lined with fun stores and eateries, and on Sundays, the whole thing shuts down to cars and becomes a family cycling paradise. Rent a bike and soak in the atmosphere — and yummy street food.

Though nowhere is 100% safe, and we must always use thoughtful judgment when traveling or walking around, Merida is considered one of the safest cities in the world. According to the 2019 ranking by CEO World Magazine, Merida is the second safest city in all of North America, and the safest in all of Mexico.

The Wealth of Merida

In fact, Merida has historically been financially stable and wealthy. In the early twentieth century, it was said that Merida had a greater concentration of millionaires than anywhere else on earth! Evidence of affluence remains, with beautifully maintained city facilities, including mansions repurposed as museums, municipal buildings, and even banks.

Plaza Grande in the Centro

While I gravitated towards the Paseo de Montejo and took many of the photos shown here in that area, the touristic heart of Merida is its lively Plaza Grande in the historic Centro area. It’s certainly a must-see part of the city!

The Municipal Palace shown below is one of the most famous (and gorgeous) buildings in the Plaza Grande. Also, make sure to check out the Cathedral of Merida across the plaza — it was built in 1598, and is one of the oldest cathedrals in the Americas. It was erected on the ruins of the Mayan city of T’ho.

Like Quebec City (incidentally, the #1 safest city in North America by that afore-mentioned ranking, with Merida right behind), Merida brims with phenomenal flowers. My favorites were the fire-red flamboyan trees pictured below — in their full glory during our July visit.

Is Merida Close to the Beach?

It’s important to note that Merida, Mexico is NOT a beach town — but it is just a 30 minute drive from the cruise port, Progresso, and just a little farther to the lovely small beaches along the coast beyond that. Merida is SO different from Cancun, but if you’d like to go from Merida to Cancun, or Cancun to Merida, there are tons of affordable and easy bus options (just 4 hours away), or short flights.

If you’re headed to Merida, I highly recommend snagging a copy of fellow blogger Cassie Pearse’s useful book, (affiliate link) Yucatan with Kids. I got the e-book Kindle version on my phone, and constantly pulled it out to get brilliant ideas for where to go and what to do!

Merida, Mexico in Yucatan state was an excellent first Latin American destination for travel with our young kids, and I’m so glad we went! If you’ve been, what was your experience like? If you haven’t been yet, does it intrigue you? Do share! 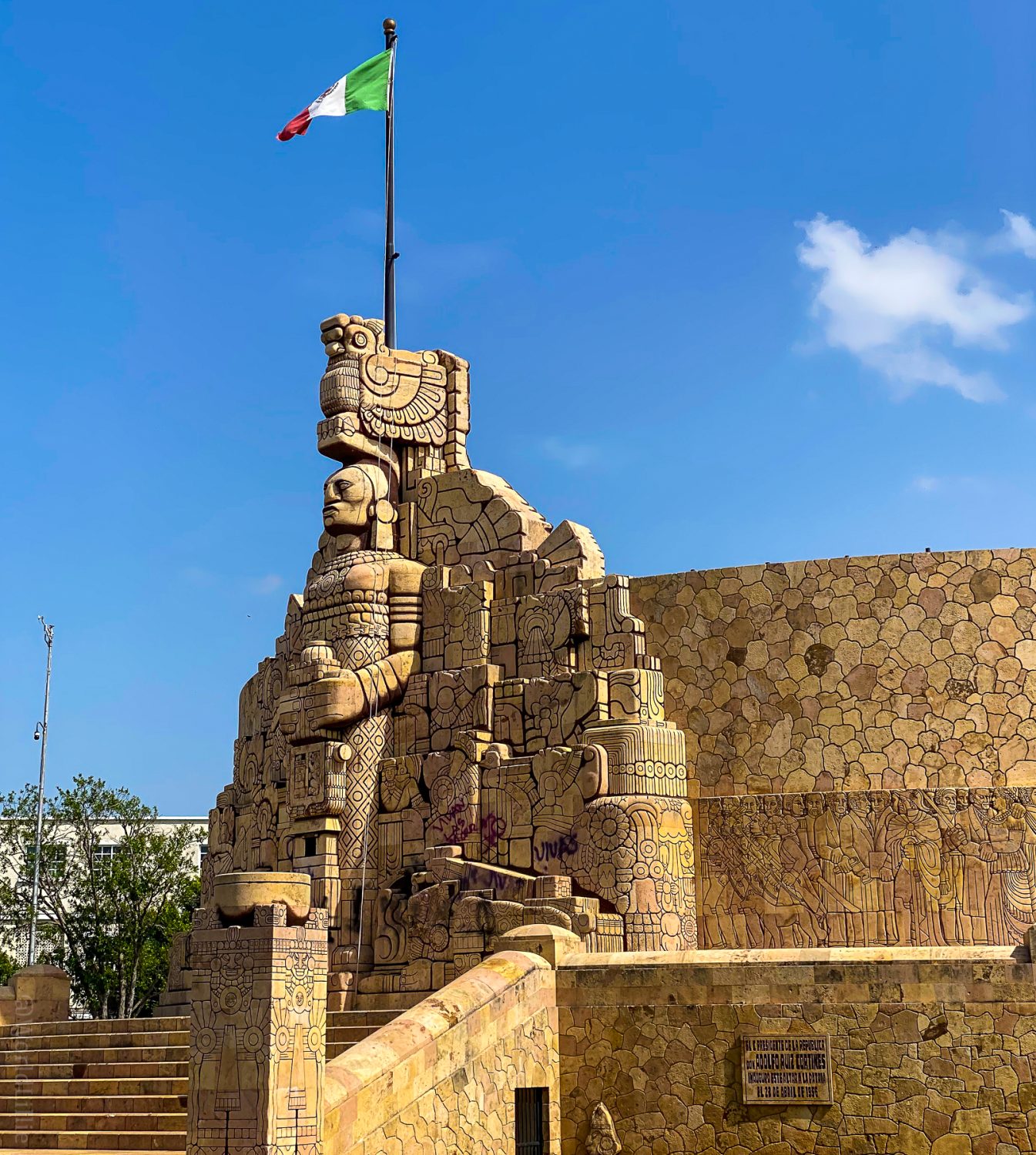