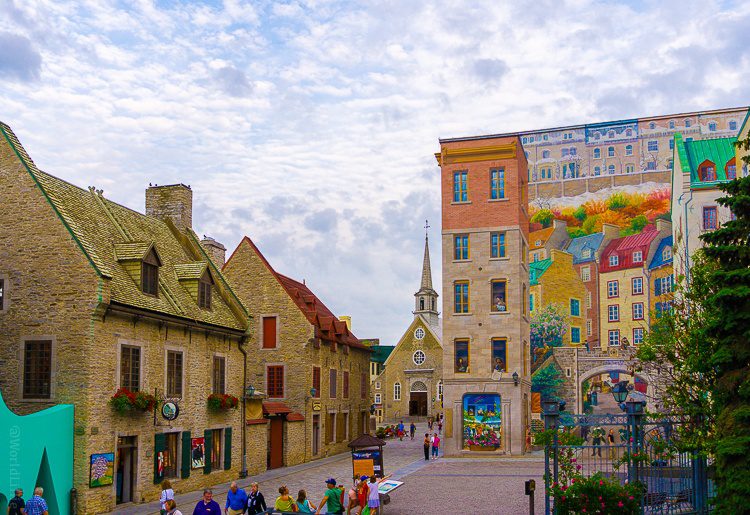 Ok, seriously — could this scene be any more charming?

Looking for Travel Ideas for Your Next Trip?

As a travel blogger, it is joy to encounter a destination that I can recommend wholeheartedly. I call a place like this an “Easy Win Destination” because it’s not only easy to get to, but guarantees awesome sights, food, and happiness. This year I traveled near and far, but of all those places I saw, the award for #1 spot I’d suggest you go to is… 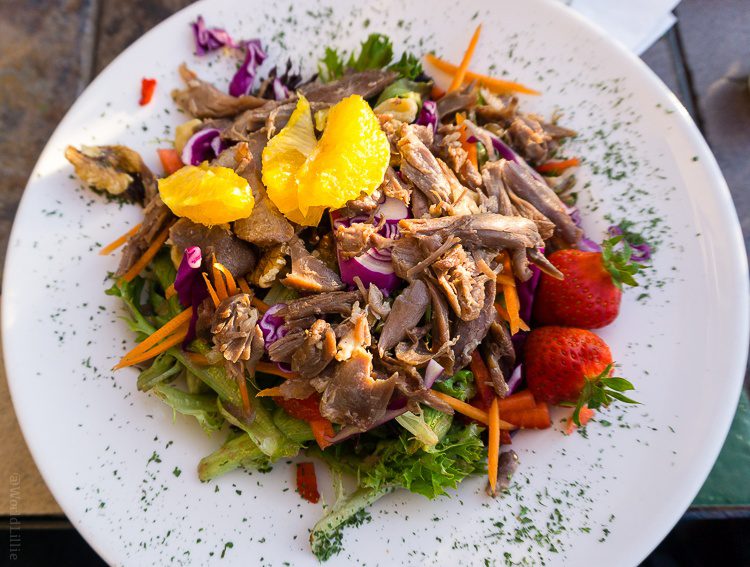 Salad with local strawberries and lots of duck confit!

There are googobs of reasons why our family loved Quebec City so much, and I must emphasize that I was secretly pregnant during the visit — nauseous, exhausted, and crabby — but the city was so fabulous that it singlehandedly snapped me out of my funk. Let’s see why. 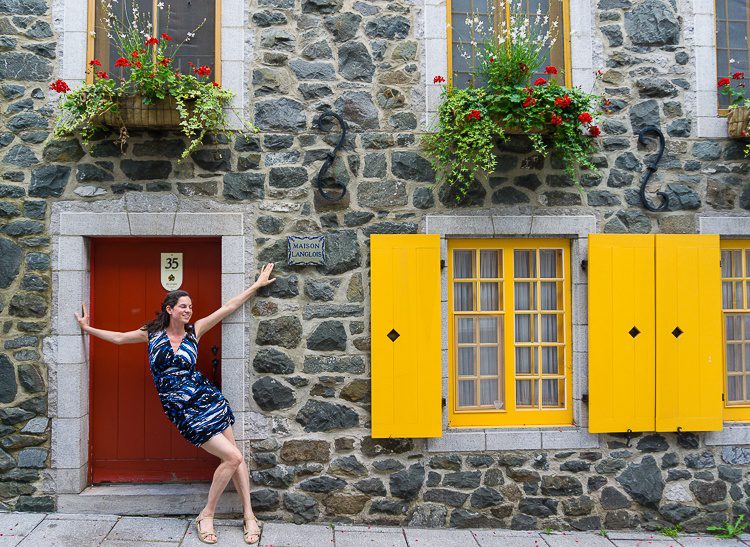 My attempt at a dramatic fashion pose.

The first reason you’ll love Quebec City is that it looks like a fairy tale. Literally all you have to do to have a good time for days on end is to stroll through the cobblestone streets of Old Quebec. I’ve been all over the world, but Quebec City is one of the most visually appealing places I’ve ever seen. I could even imagine a burly football-playing guy getting a little weepy taking in the sights. I really could! 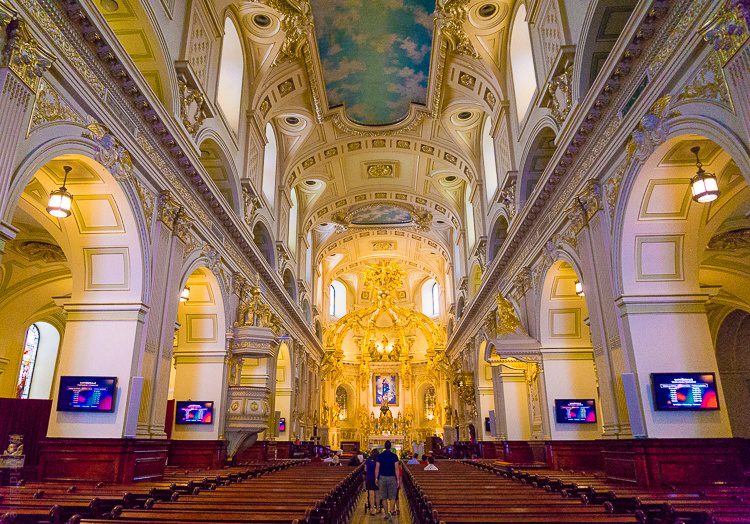 Second, flowers are everywhere! I’m not sure how this happened (we can just conjecture there was a Pretty Flower Pact between every building owner in town), but each facade competes with the next for most delightful window box. (Touring the Phipps Conservatory in Pittsburgh brought to mind the flowery joy of Quebec!) 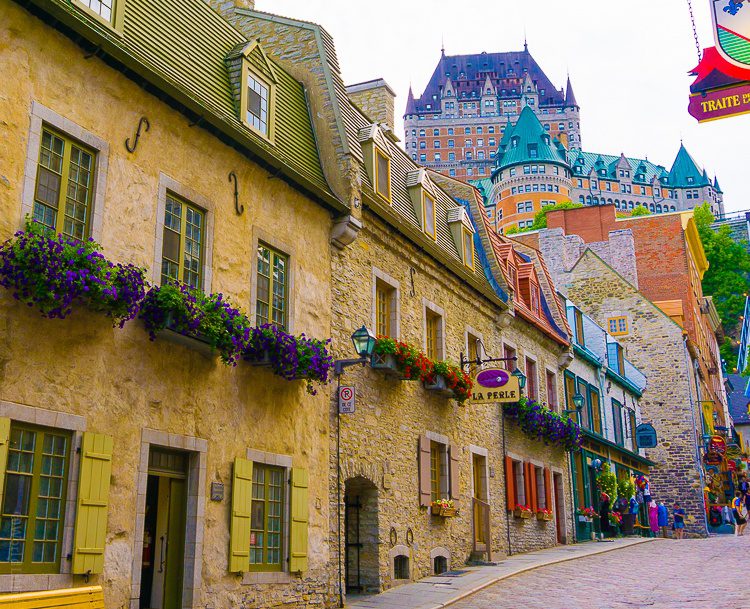 Third, public art abounds. Check out the photo below, which presents a translucent “roof” to an otherwise mundane alley. It makes magenta and teal rainbows when you look at it from different angles! 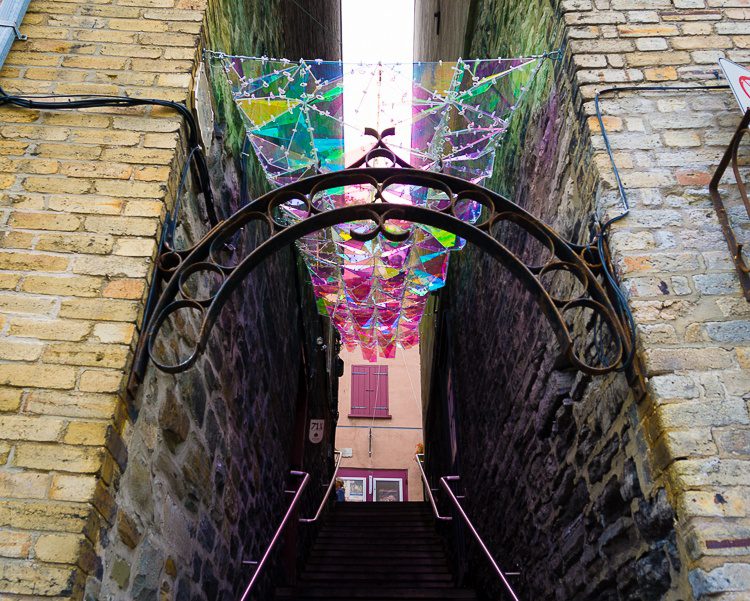 Quebec City has some of the best public art around.

Here’s another gem of street art, featuring a massive mural that makes it look as though the wall has been ripped off and you’re looking through time to hundreds of years ago. 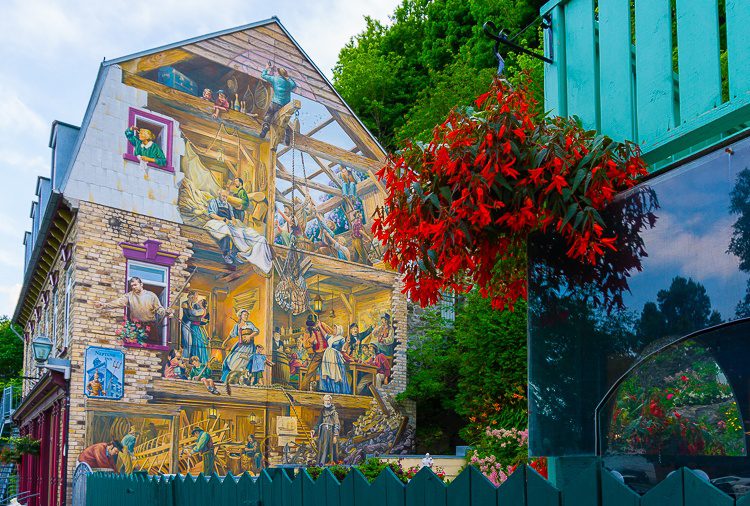 Complementing all that art and the flowers, Quebec City also gifts visitors with abundant, green public parks and soothing fountains. Our littlest traveler greatly enjoyed splashing in these very fountains. 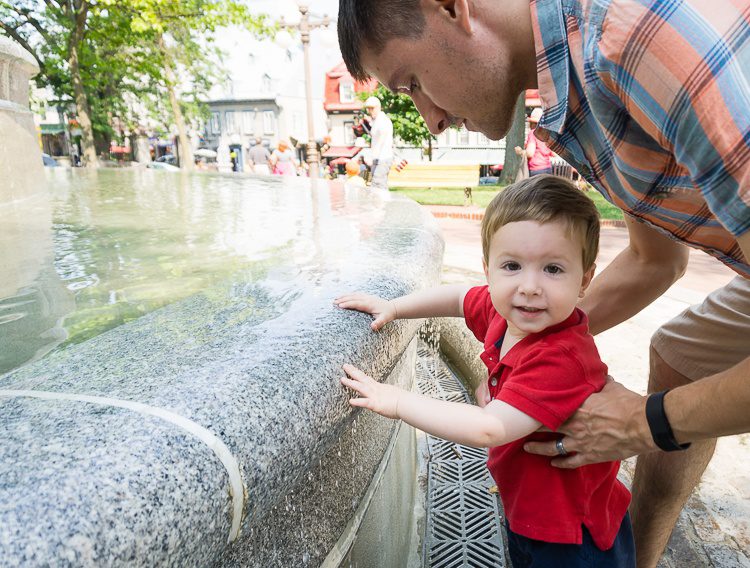 So many fun fountains in the city.

The next reason Quebec City wins our award for the year is that European-style open-air dining is plentiful. Of course, we visited in summer, so this is not the case year-round, but for months of the year, you can enjoy amazing food and the fresh air all at once in Quebec City. And we did! 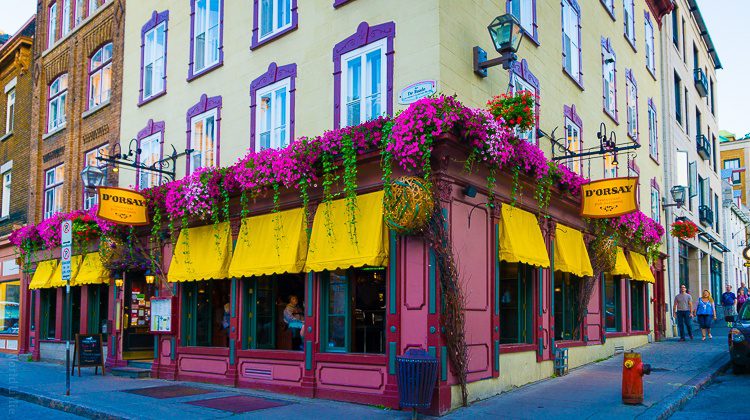 Flowers draped over one of many open-air restaurants.

Speaking of meals, the food in Quebec City is SO GOOD. Highlights included rabbit pie, kangaroo burger, poutine (of course), anything with brie, and super-fresh salad with duck confit. Want more food photos and tips? Make sure to click over to my article about the city’s best market for fresh, local foods and flowers! 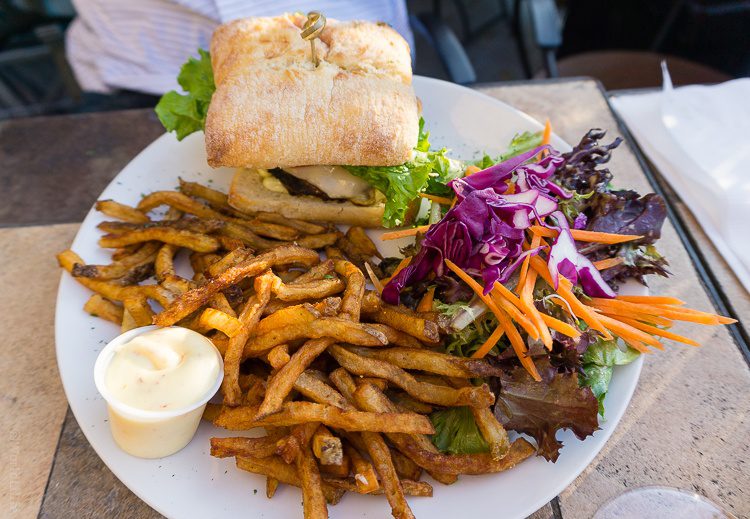 Of course, no compendium of the highlights of Quebec City would be complete without mention of Le Chateau Frontenac: the grand hotel built in the 1890s that is considered the most photographed hotel in the world.

It rises above Old Quebec like a princess’s castle, sending fairy dust over the whole city and making any visitor sigh with the magic of it all. It can actually be surprisingly affordable to stay in that palace, so make sure to click here to check if there are any deals afoot. 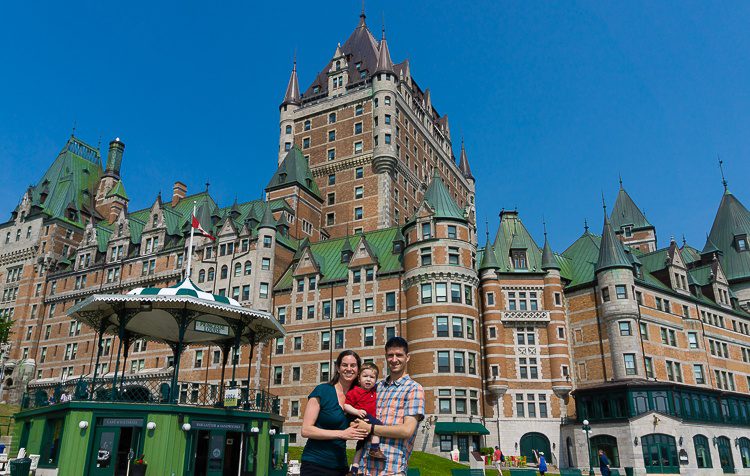 Our family in front of Chateau Frontenac.

8. Old Quebec is Walkable and Easy

Moving right along, Quebec City is supremely walkable. The major tourist sights are not too far apart, but are also not so close that you get bored after a day or even three.

Given that my favorite city in the world is known as the walking capital, this wander-ability is something I deeply value. Seriously: all you have to do to have a good time in Quebec City is to meander! 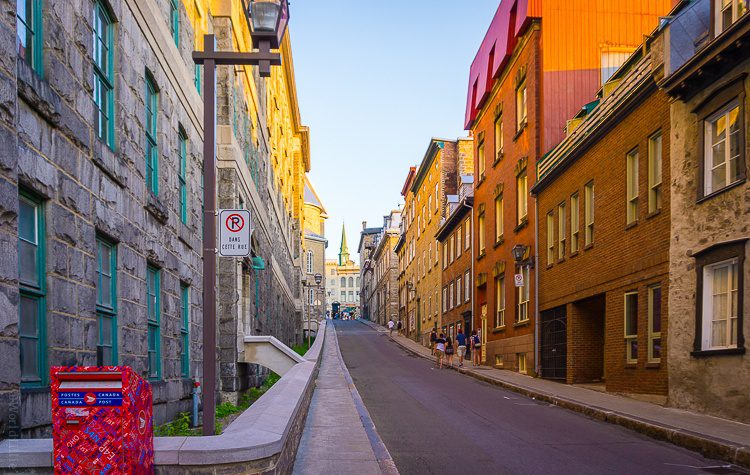 Just look at these views, people! How could you be glum in a rainbow gingerbread world such as Old Quebec City? Simply mosey where your heart takes you, and smile! A perfect vacation. 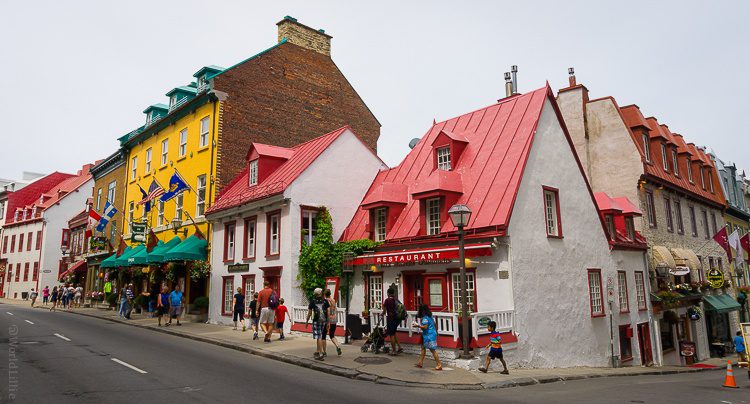 Isn’t the city like a toy village? So cheerful!

As a final note, do know that just a few steps beyond Old Quebec, a luscious footpath beckons along the Saint Lawrence River. Colin, Devi, and I took it as the sun set to walk back to our hotel. “Oh Quebec City,” I thought as the sun turned the scene gold, “you’ve stolen my heart!”

See all my Quebec City to Montreal articles here.

Inspired by the architecture and artistry of Quebec City? See my round-up of 40 art prompts from around the world. 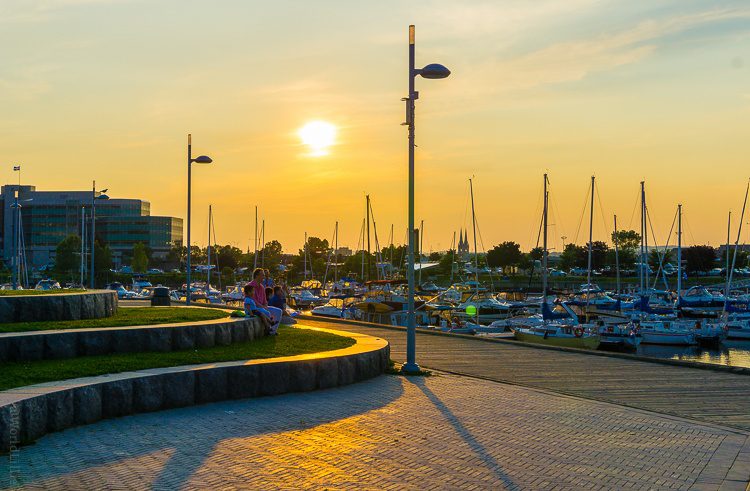 Sunset over the riverfront path.

Ready for Your Quebec City Vacation?

All that, dear readers, is why Quebec City wins my award for most recommended destination of the year. So what is YOUR take? Have you been? If so, what were your impressions? If you haven’t visited yet, does the city appeal? Do share!

If you enjoyed this article and are still planning your trip, click here for an easy affiliate link to Quebec City hotel deals! 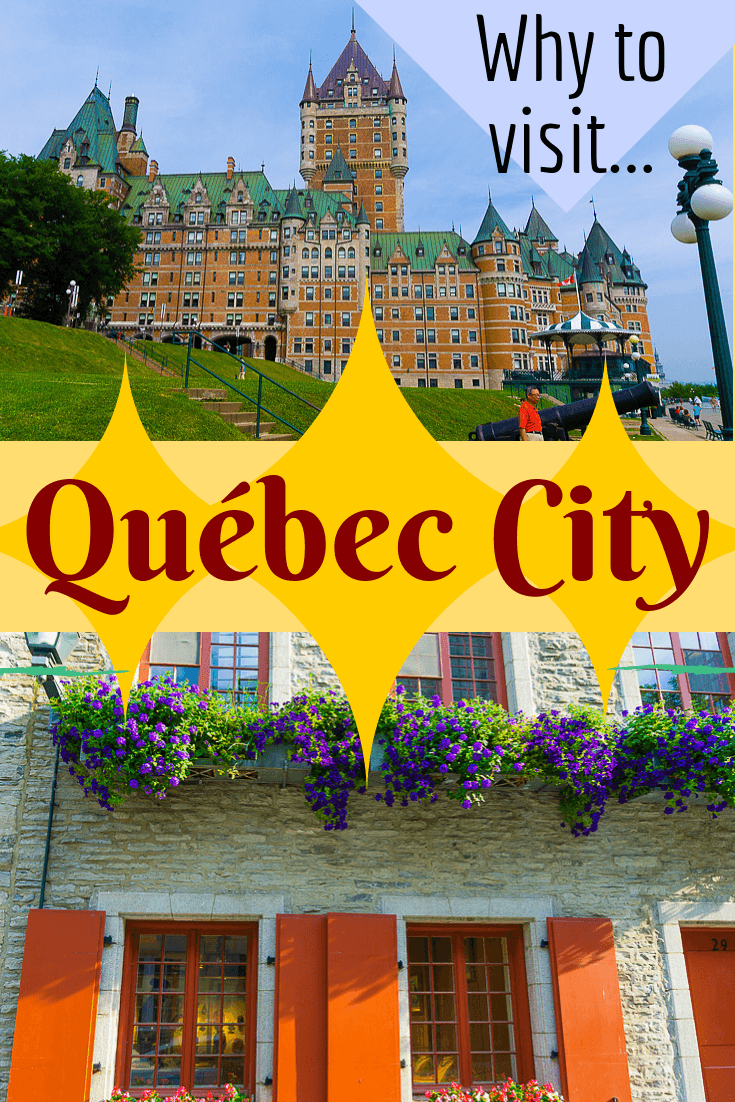 […] Quebec City, Quebec, Canada — Recommended by Lillie Marshall from Around the World L […]

Wow your photos are so colourful. I agree with another reply, it looks like Europe. Have to put it on our list. We are just finishing off an around the world trip and we are already talking about our next destinations.

Quebec City is where I lived almost all my life. I now live in Merida, Yucatan. Having travelled in Europe, USA and Mexico and after having visited many beautiful cities, I came to the conclusion that Quebec is absolutely on the top of my list. Now talk about the people of Quebec City. The most friendly in the world. I would suggest visiting Quebec during Les FÃªtes de la Nouvelle-France in August. If Lillie thought she was time travelling, during that period you really will be. Who knows! Maybe you'll meet us there!

It's Europe with out the travel. I've been many times summer and winter. My favorite vacations.

Thank you for the article, I just read it, your pictures and comments confirm me that you understand perfectly the way we live here in QuÃ©bec city, even if I was born here and still live here, everytime I go for a walk in the old city, I am amazed, I go into a fairy tale like you say! than you again and you have to come during winter, with you two kids ;)

Well said! What a treasure that you get to LIVE in this city!