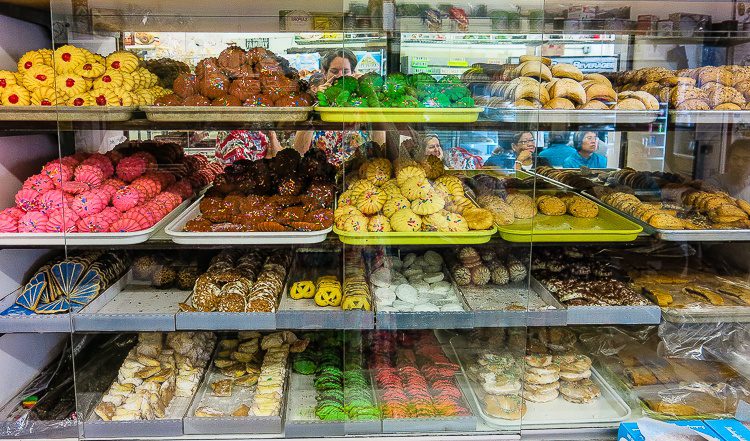 I expected luscious Italian food in my mouth during the Boston North End Italian market tour I just returned from, but I didn’t realize I would also learn shocking facts about my own kitchen and city. 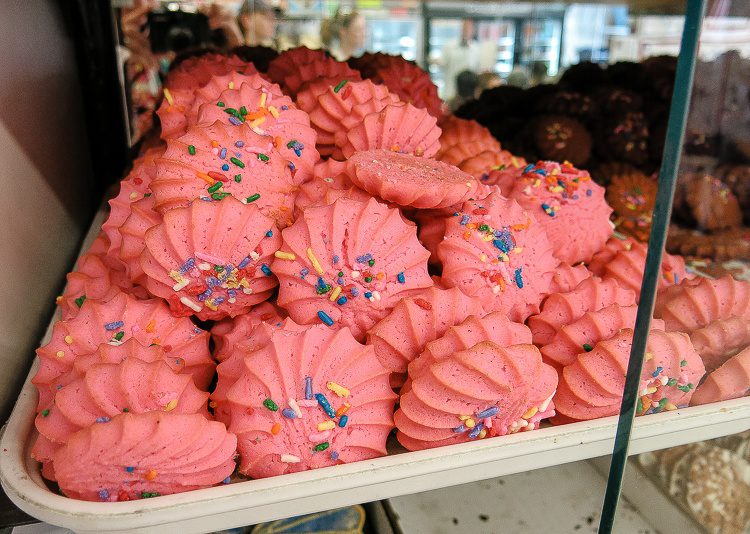 Don’t gobble up the screen.

Our tour group of a dozen folks from around the country assembled at 10am just past the Haymarket T station. Before us opened the (hungry) mouth of the North End: Boston’s “Little Italy,” a famed commercial neighborhood that has been continuously inhabited since 1630. 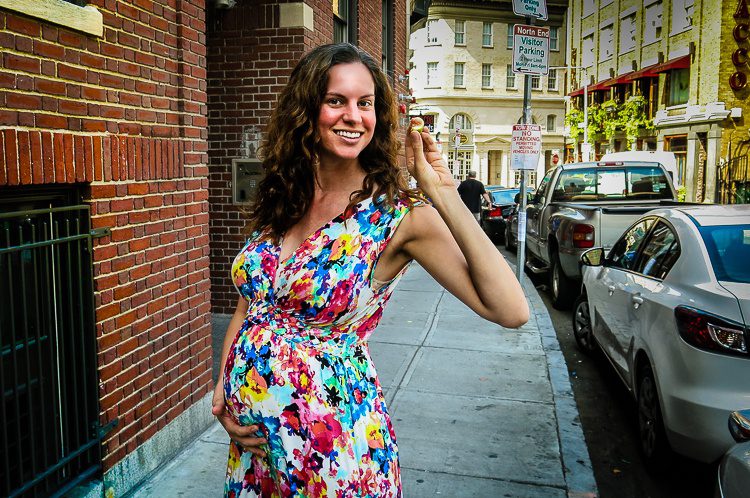 My Baby-to-Be and I LOVED the food samples on the tour. Here, a fresh fig.

After we all introduced ourselves, our guide gave us a brief historical overview of the North End. Here was the first shocker: the North End used to have a huge Jewish population, and “Salem Street” was once called “Shalom Street!” For a Jewish gal like me, this was an exciting new fact about my home city.

Which Italian sweets are your favorite?

Our tour’s first culinary stop was an Italian bakery, but NOT the famous one (which I shall keep nameless, as I’ve never liked it much) that all the tourists flock to on Hanover Street. Rather, the small gem we toured, “Maria’s,” is low-key, authentic, and scrumptious. Plus it has a fluffy cat. 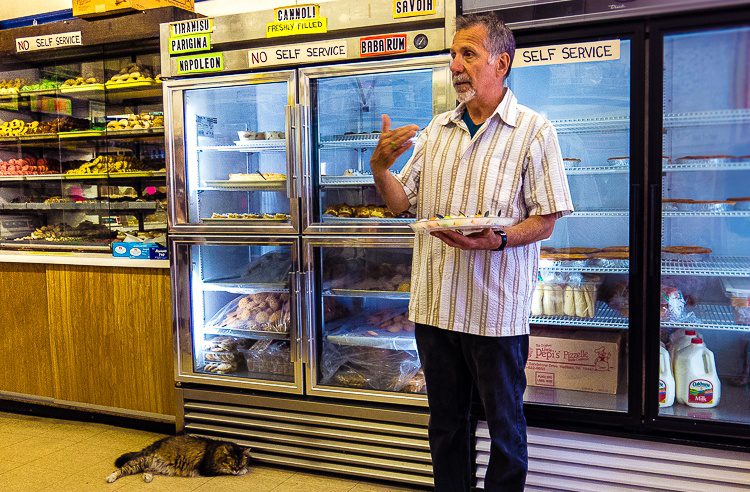 Our guide gave some pastry background as a poofy cat (Italian?) looked on.

To our ecstasy, after talking through the different types of Italian pastries in the shop, our guide (a former chef!) pulled out a platter with bite-sized samples. Given that I have the pregnancy symptom of being madly hungry all the time, I embraced these nuggets with gusto.

These flaky pastries were unbelievably good.

A pasta shop! We all squeezed into the cozy space at DePasquale’s and I giggled, taking photos of the tentacles you see below. Little did I know, my culinary world was about to be rocked. 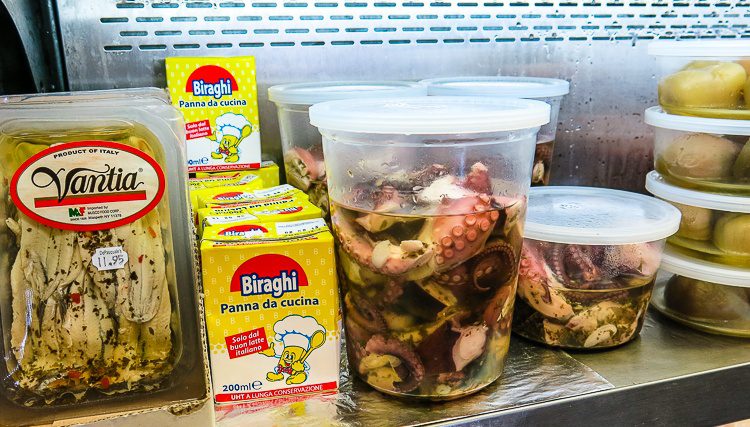 You see, it was at this spot that our guide began to educate us about olive oil and balsamic vinegar. As the flavorful yellow oil slipped onto my tongue from the tasting spoon, the guide revealed that much of the “olive oil” in today’s supermarkets is fake, being mixed with safflower and other lies. Further, since olive oil only lasts a year or so, most of us have been using rancid oil. Nooo! 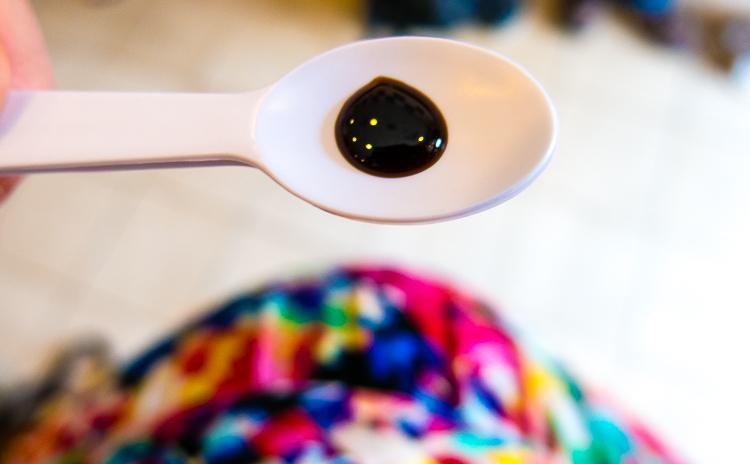 Then came an education on balsamic vinegar. In fact, true balsamic vinegar is pure and expensive, but much of what we clamor to buy in our American stores is actually a mess of mediocre vinegar, sugar, and food coloring! And I thought I was so cool with my low-budget balsamic drizzles… 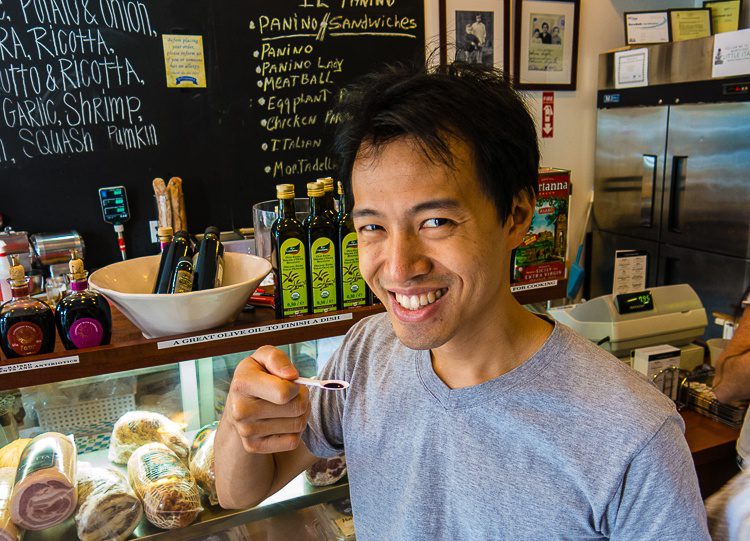 In a tragic twist for those of us incubating a mini-human in our abdomens, our guide then passed out prosciutto slices on fresh bread. This was sad because preggo ladies are advised not to eat cold cuts, as we are at greater listeria risk. I glared in jealous rage at my friend Angel the whole time he enjoyed his snack. 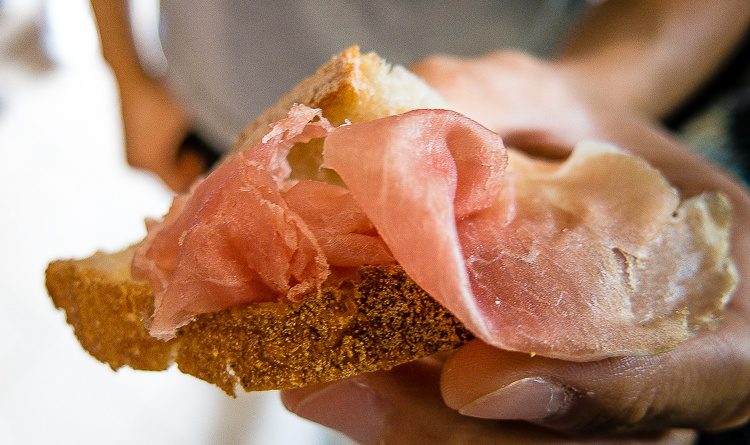 Next up was Polcari’s: a charming old-world coffee, spice, and random food store that’s been operating since 1932. Feast your eyes on this rainbow of goods! I’m reminded of the colors of the Glass Museum in the Finger Lakes, NY! 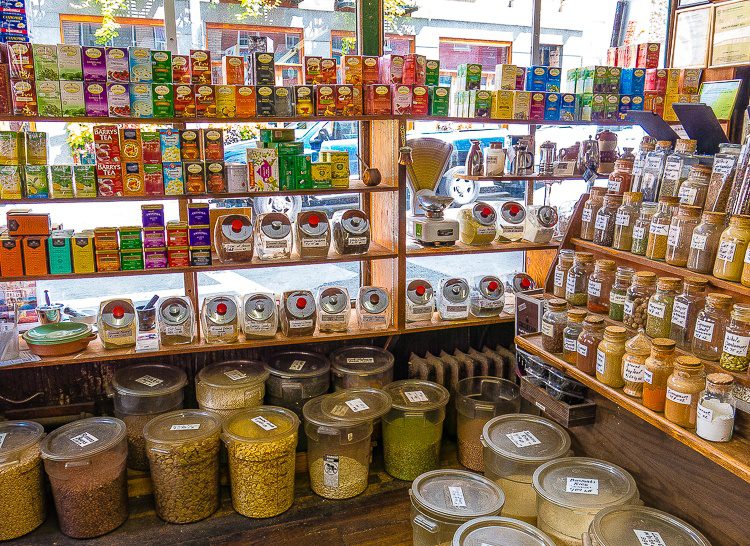 In Polcari’s, we were aghast to learn that what we call “cinnamon” is actually a cheaper spice called “cassia.” We got to smell and feel real cinnamon versus cassia, and my culinary world was rocked again.

Then, our guide revealed that what is marketed as “Nutella” in America is in fact quite different from the healthier (!) version sold in Europe, having over three times the sugar, along with trans-fats and inferior ingredients. Argh. The delusions that have been swirling in my kitchen! 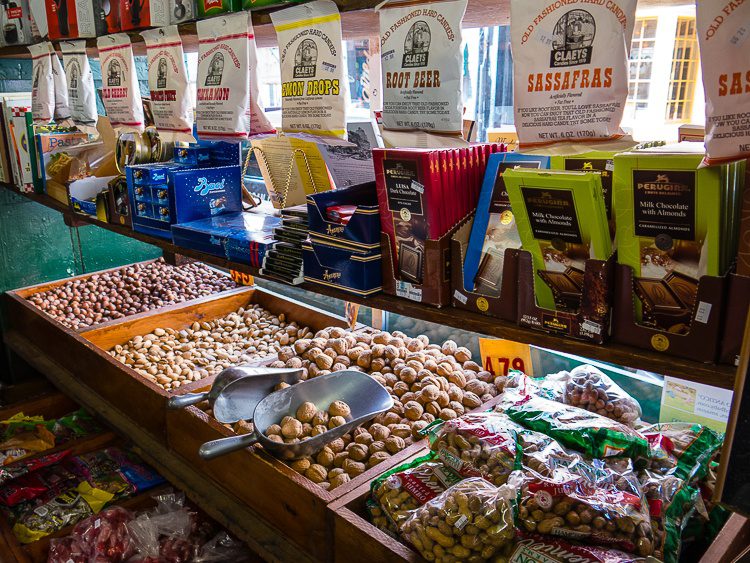 Beautiful treats to gaze at as our culinary minds were rocked.

Our tour’s penultimate stop was Alba Produce: a wee, unmarked produce market at which we were presented with a glorious plate of figs, fennel, and cabbage. Crunch! I’ve never thought much about fennel, but you may now count me as a… fan-(nel). 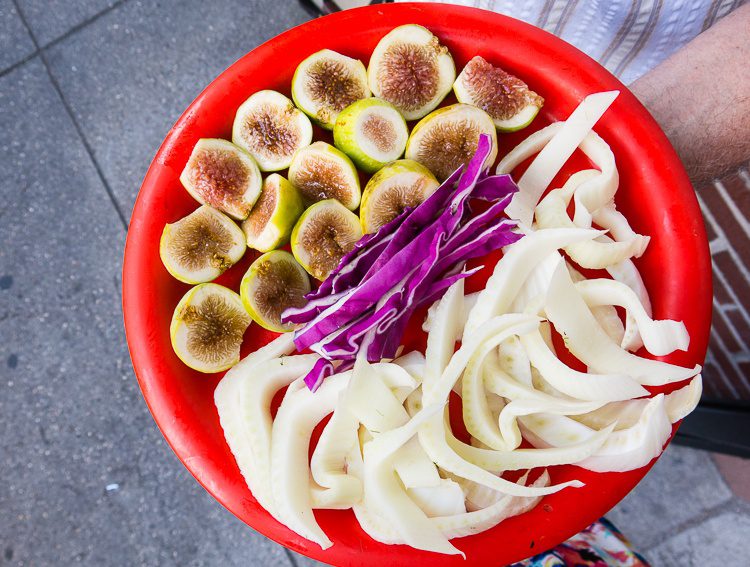 I put lots of figs in my mouth and was happy. Outside on the narrow street, we laughed about how the movie “The Town” (one of a recent barrage of Boston gang movies) features a car chase in the North End. It’s hard to drive 2 miles an hour on those tiny streets, let alone race through in pursuit! 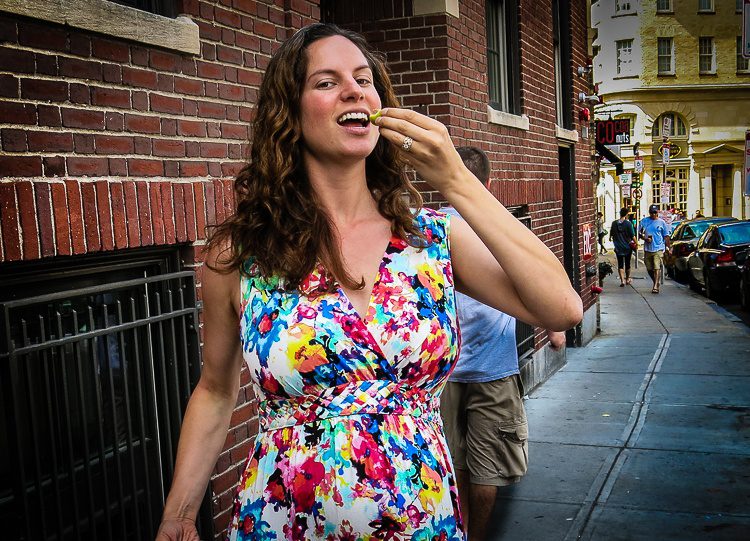 Through all of this, I kept thinking of the time I’ve spent in Italy itself. In my experience, the stereotype of Italy having incredible food is very, very true, so our Boston North End tour’s emphasis on finding the most authentically Italian markets and eateries was much appreciated. 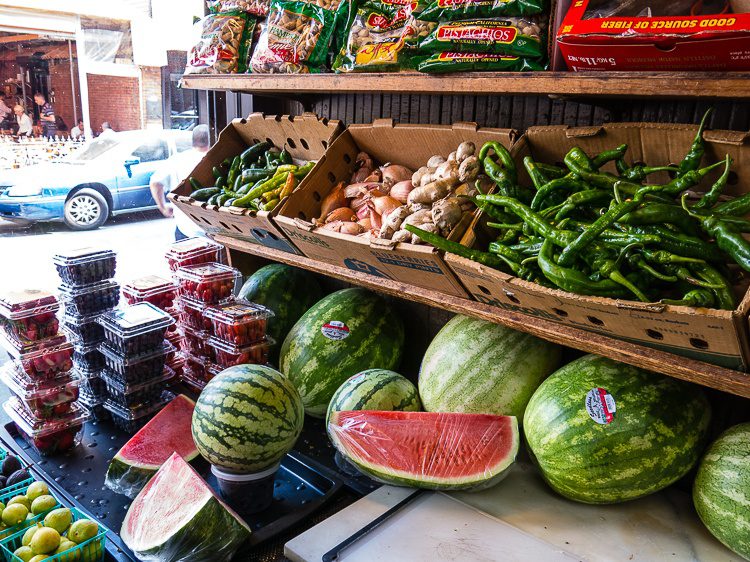 Our three-hour tour was drawing to a close, with one final stop. Monica’s Mercato called to us… 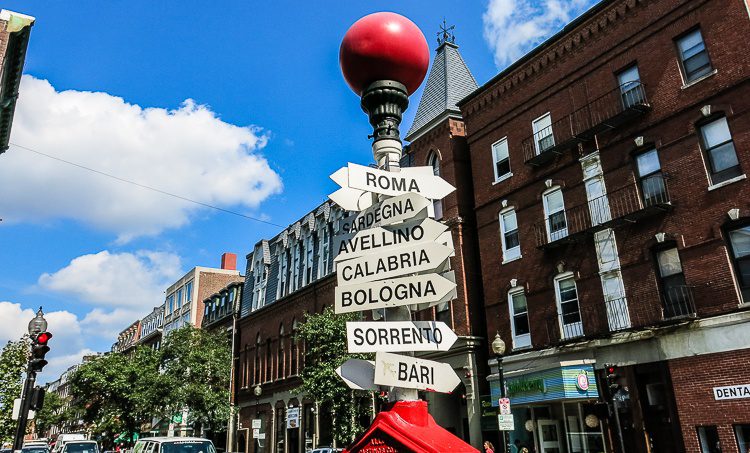 The North End is the closest you’ll come to Italy in Boston.

Plump homemade ravioli winked out from the display case. Our guide explained that many “Heat and Eat” markets have sprung up in the North End for those who live there and have no time or inclination to cook. Those lucky North End residents! 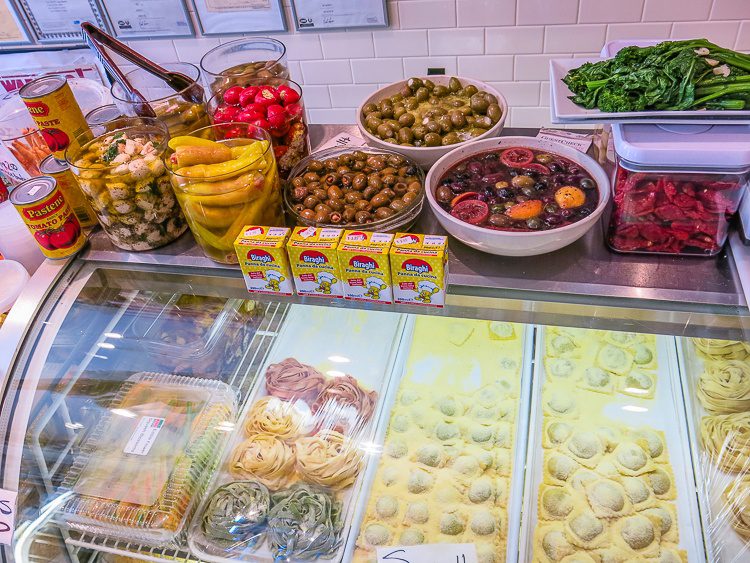 Homemade pasta and all the glories that go with it.

Thus concluded our yummy North End food market tour. Angel and I headed home satiated from the snacks and dizzy from the surprises we’d learned. Thanks, Boston Food Tours, for a wonderful tour!

We were guests of Zerve Tours, but all olive oil shocks, tentacle photos, and fig chomping are my own.

Awesome! There are so many things to do in Boston and lots of tasty food to eat. These sweets are looking so tasty as well. When will I been Boston will must try these things.

The reason that there is a Little Italy in Boston is kind of a funny story. When the state house was being constructed, the architect decided that American stone carvers were not good enough to work with Italian stone (which is what some of the interior is made of). So, he had some Italian stone carvers come over from Italy, and some of them liked it so much that they decided to stay, and raise their families here. Thus, we have Little Italy.

The food in this store seems pretty authentic from the look of it and it's an Italian who is saying it. It's amazing you can find figs, cabbage, fresh fennel, Italian bread, fresh homemade pasta... awesome!

So good to know!

I would LOVE to go on a food trip there!