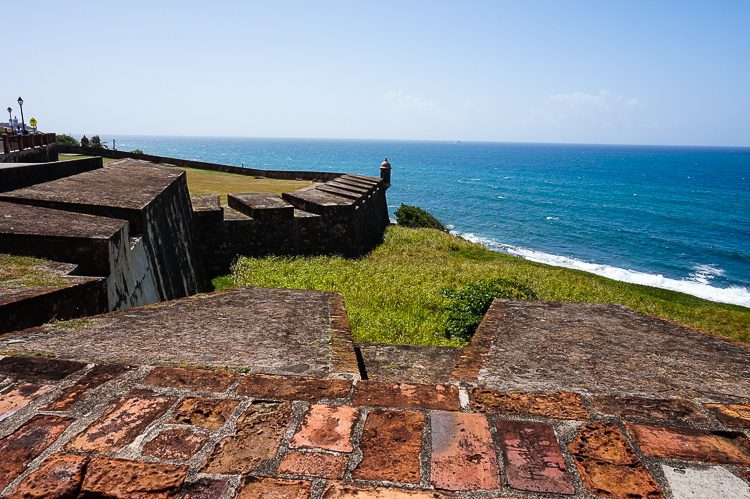 The iconic sentry boxes of San Juan’s forts are featured on the Puerto Rico license plate.

“You’ve GOT to see the forts in Puerto Rico!”

Anyone will gush this when you ask what to do in Old San Juan during travel through Puerto Rico. But WHY, exactly, are these forts so famous and popular? What is it like to visit, and what are tips for making your time in these stone structures enjoyable? Read on… 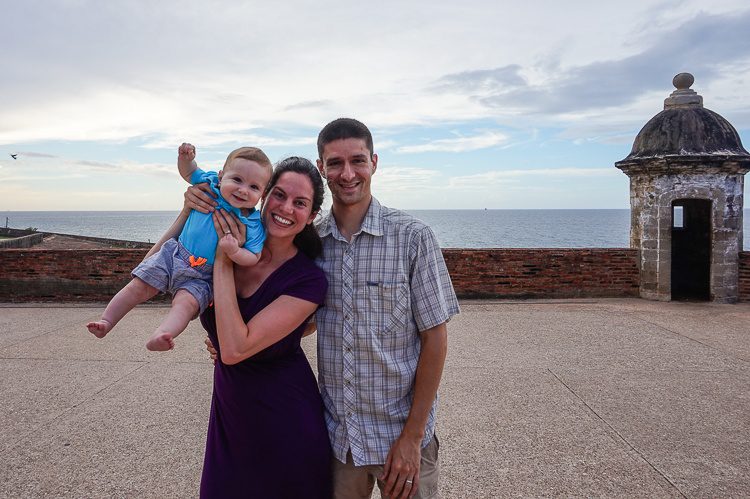 The background you must understand is that Puerto Rico was incredibly important, geopolitically. The island was a vital strategic base from the 16th through 18th century as Spain battled with other European powers for colonial control of the region.

Whoever held Puerto Rico controlled the “door” to the Caribbean, Central America, Cuba, Mexico, the southeastern United States, northern South America… and all the riches therein. 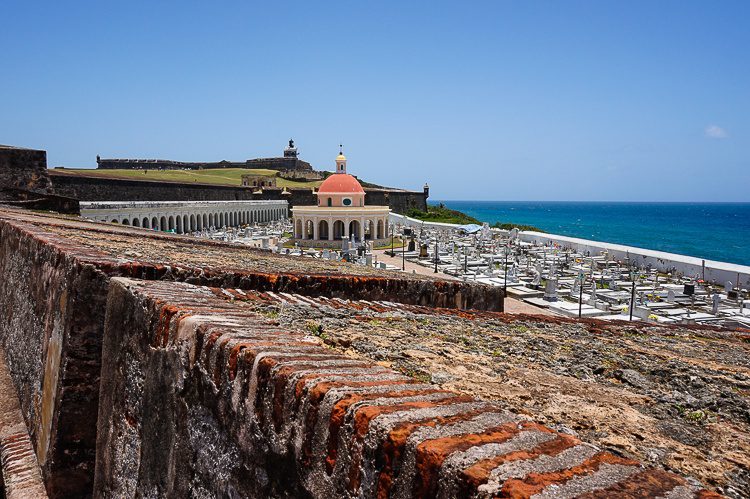 Spain colonized Puerto Rico in 1493, launched by Christopher Columbus and furthered by the bloody efforts of Ponce de Leon. It soon became clear to Spain, however, that the rest of Europe lusted for this island.

To protect it, in the 1530s, the Spanish king ordered construction of two forts: La Fortaleza (not pictured here because it is the official residence now of Puerto Rico’s governor), and San Felipe del Morro.

Brightly colored houses face the forts and the ocean.

In the centuries after these forts were constructed, Puerto Rico was attacked repeatedly by the British, and by the Dutch as well. (You may remember the Dutch from such Caribbean conquests as Curacao.) Spain retained control of the island, but there were many very close calls, fires, explosions, and casualties.

The Spanish realized they needed another fort: one that would protect against attacks by land as well as by sea. 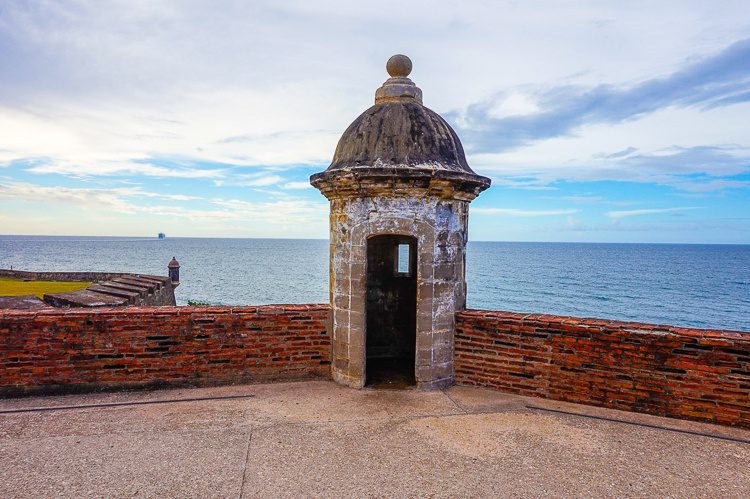 In 1793, the Spanish completed the fort called Castillo de San Cristóbal, essentially wrapping the city of San Juan in a protective embrace of stone walls and towers.

The structure sprawls for acres, and remains the largest fortification ever built by Spain in the New World. 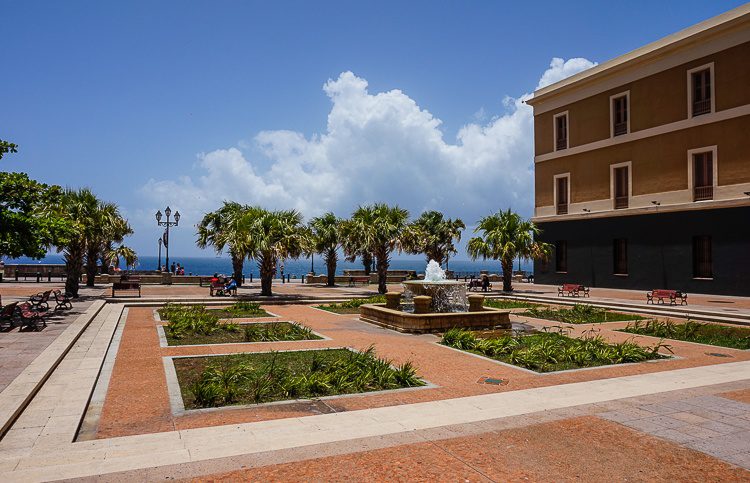 Pretty parks face the forts as you get closer to the heart of Old San Juan’s narrow streets.

The Forts Didn’t Protect Against the U.S.

The forts kept the island under Spanish control… until the Spanish-American war in 1898, when the U.S. took over Puerto Rico. It wasn’t the fault of the forts, though!

Rather than attack at San Juan, United States forces slipped into Puerto Rico from the small southwestern town of Guánica and took over the island from the inside. 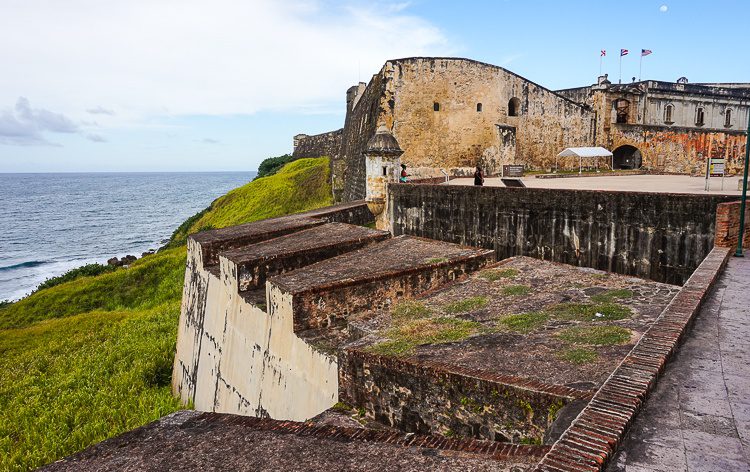 So what about now? The hulking forts that were meant to keep Spanish rule safe are now under control of the United States National Park Service (the same one that cares for Rocky Mountain National Park in Colorado!), and are toured by countless visitors each day. This begs the question: What is it like to visit these famous forts? 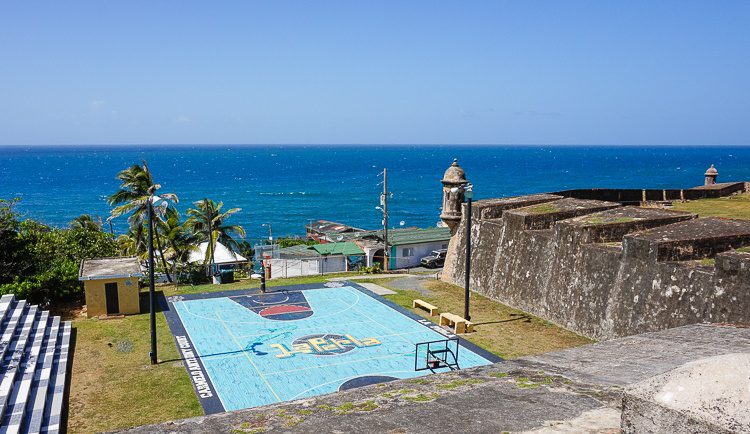 This fort-side basketball court has the coolest location ever.

As I mentioned in my previous article about touring the beautiful colored streets of Old San Juan, it is SO HOT in San Juan during the middle of the day. This issue is multiplied by the fact that both forts have large, open fields which essentially become frying pans.

Even with hats, sunscreen, and water, we had to give up our 1pm visit within half an hour and come back the next day after 4pm. Remember that the forts are about a mile apart and also span a lot of ground themselves, so budget enough time for everything, take it slow, and don’t beat yourself up if you can’t see every inch.

Getting to the Forts, and Going Inside

There are reasonably-priced parking lots near the entrances to both forts, and public transport goes there, too, as do cabs of course. There is a LOT of the forts that you can see without paying the small adult entrance fee (kids are free), and all of these photos were taken without actually entering the paid inner part of the forts.

One thing I loved about the area was that it is full of locals flying kites on the high sea winds and playing with their kids. Kudos to the National Park Service for making the park so welcoming to everyone! 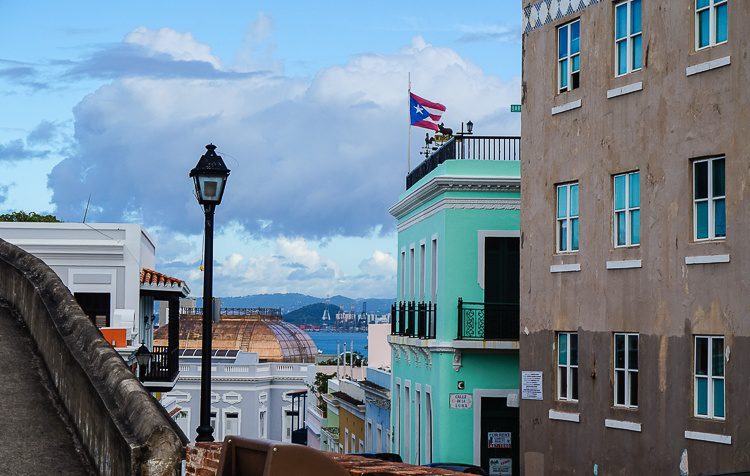 The streets around the forts are beautiful.

These historic forts in Old San Juan, Puerto Rico, are truly special to see. Our family now has a photo hanging up in our living room of us in front of Castillo de San Cristóbal. It’s things like this that you remember! 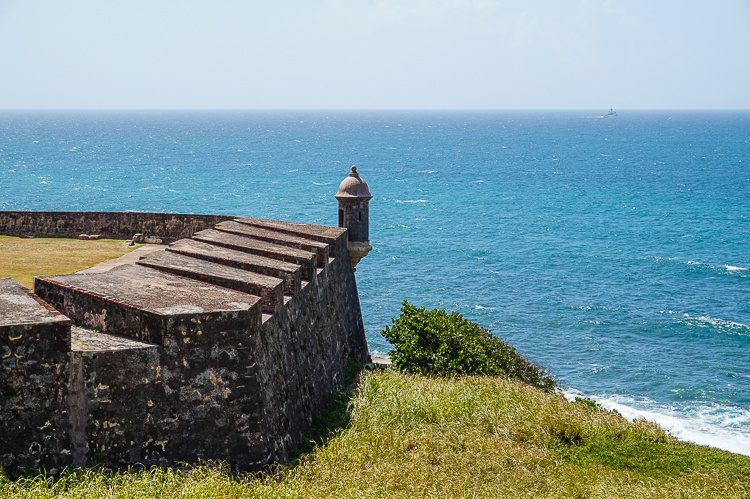 Everyone traveling to Puerto Rico craves a shot like this!

Hotels and Rentals in Old San Juan and Puerto Rico

To save you time, I did the search already, so you can just click here for San Juan hotel deals, click here for the best Puerto Rico hotels, and bop right over here for beautiful Puerto Rico vacation rentals. A small commission goes to support this site at no extra cost to you, so thanks in advance, and happy travels!

Lillie, I just wanted to say that I've been a subscriber for years (as a teacher who LOVES travel). I randomly came across this post in a google search and I love your writing style and zest for travel! Thank you! You're an inspiration!

Thanks so much, Kirsty!

History..... was such a place to see...Just got back from vacation from Puerto Rico...Puerto Rico is Beautiful...loved looking at the views from the top of the fort.

So glad you had a great trip! We can't wait to go back.

Wow! I never knew this was in puerto rico! I must go here!!