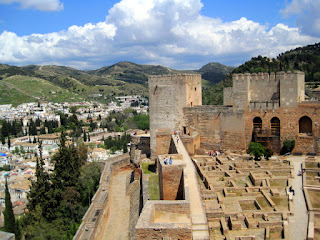 I was really thrown off when the two guys never came home from the forest.

Now before I launch into this story, let’s all learn, like the refrain sung by the whole audience during a folk music concert, a useful phrase: “Forcing it.”

The phrase, “Miss, you FORCED IT with the homework” was used ad nauseam in Boston Public Schools to mean: “Madam teacher, we believe the amount of work you are giving is too much.” In other contexts, “Forcing it” basically means going way over the top. Bear this in mind because you will need this as a chorus link to connect this tale of hippies and castles and dance clubs. 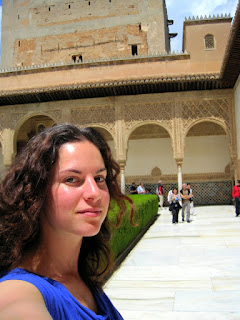 When I first arrived in the fantastic Oasis Hostel in Granada, Spain, I befriended two chaps: One German named Phillip, with whom I went running, and one British youngster named Tom with a plaid shirt and innocent glow.

When you initially arrive somewhere, you are particularly vulnerable, and thus much more open to deep bonds with new friends. (This is one reason to travel in the first place!) Hence Phillip, Tom, and I bonded beautifully those first few days: going on tours together, eating together, and chatting through the warm evening. It was nice to have a gang again!

Then Tom popped a question. “Do you two want to travel with me two hours to a hippie squatter commune in a forest?” he asked. I stared at him in shock. “I’m running out of money,” explained the 20-year-old, “So I need to find free places to sleep the next few months. I think I want to move to that forest commune. They don’t use money or anything. They just barter vegetables.” 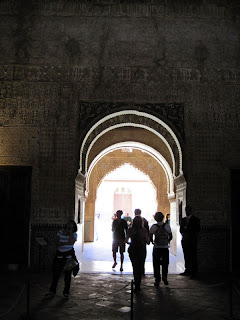 Being a lover of all things extreme, I agreed to accompany him, setting my alarm for six in the morning and obtaining a promise from Tom that we would return to Granada before nightfall. Phillip said he would join as well. Come dawn, I descended to the hostel lobby to meet my buddy.

At this point, Tom gave me a few more details about the day’s plan, and suddenly it became clear: this schedule involved a whole lot of hitchhiking. Nope! I draw the line there. With apologies, I bowed out of the scheme and ascended back to my ten-person bunk bed dorm.

That evening back in the hostel after a sweet day of sightseeing around town, I turned down several offers to grab some tapas with other folks so I could wait around for Phillip and Tom to return from the forest. I was so curious how the hippie commune had been! But midnight rolled around, and no familiar faces showed up. I began to grow worried. 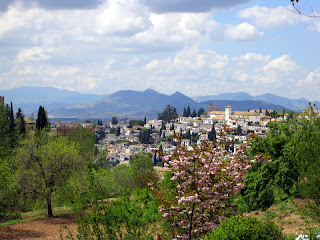 I meandered over to the receptionist. “Did those two guys come back from that forest yet?” I asked, trying to stay calm.

“They’re not coming back,” said Juan. “They’re moving there to live.”

“Wait, no!” I stuttered. “They said they would be back before dark!”

“I’m not sure,” said Juan. “But those kinds of squatter settlements are common here in Andalusia. You’ve seen the caves here in Granada where all those hippies live?”

“I haven’t been there yet,” I said, “but our walking tour guide told us that it’s kind of dangerous to live there because often the previous “Gypsy” owners come back with knives to reclaim their “father’s cave.” 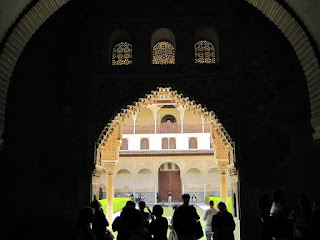 I felt empty. Eight and a half months of meeting people in a travel whirl and then saying goodbye a few days later is odd enough, but when you don’t even get the chance to actually SAY farewell or exchange contact information with a person who has connected with you and changed the way you think about things, well… that just makes you dizzy.

The next day I went alone to the Alhambra: Spain’s absolutely mind-boggling palace and fortress complex that was created and inhabited by the Muslim Sultans of the fourteenth and fifteenth centuries. 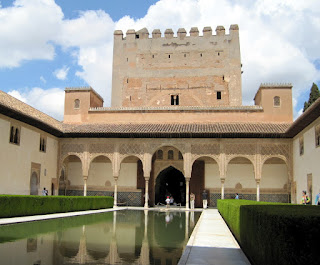 I mean… look at these pictures. L’Alhambra is nuts! It is absolutely stunning… and absolutely huge. I walked with the thousand other tourists (most notably a gaggle of fifty French high schoolers who began playing catch with their hats) through breathtaking room after room, spire after spire, vista after vista, garden after garden. Oh, our aching hearts at the sheer beauty of it all!

Can you see the woven detail carved into each stone pillar? Can you envision the height of each domed room that my camera could not even begin to capture? Do you gasp as I do to see all of your Arabian Nights and Prince of Persia fantasies in rock-hard reality in the real world? L’Alhambra is a wonder of the world. 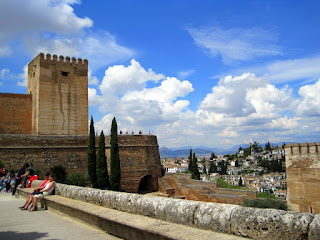 Six hours later (SIX hours, and I didn’t even BEGIN to see everything!) I returned to the hostel, sunburned and boggled. You know very well that I peeked around for two certain faces… but there was still no sign of Phillip or Tom.

I did some writing, took a shower, then realized from the hordes of folks gathering in the lobby that it was a Friday, and hence it was dancing time for all with functional feet and available time!

Finally it became clear: I needed to forget about my previous bonds and previous friends and make some new ones. I hadn’t been out on the town in a while, as I’ve been fighting off a flu or cold or something, but that very night was the time to give revelry a try again. 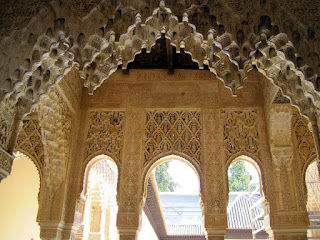 Half an hour later, I found myself in a herd of nine women (from Argentina, France, Italy, Ireland, Spain, Canada, America, etc.) and one very wide-eyed young American boy, being led by two hostel staff members to a local tapas establishment.

“I am the only guy,” stuttered the American, eyes growing wider and wider. “One guy and nine women… How can I possibly satisfy everyone??”

But the boy did his best, running hither and thither with drinks and tapas, chatting up France and then Argentina as I cheered him on. Go, America, go! 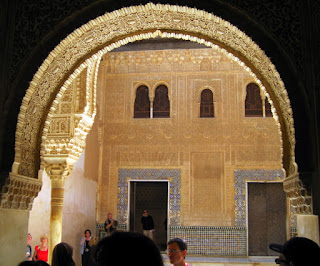 “How long have you worked at the hostel?” I asked one of the guides.

“Nine months: like a baby!” I said, because that’s how I think when I think about time. Symbolic babies.

“My son was an accident,” the man replied in explanation. 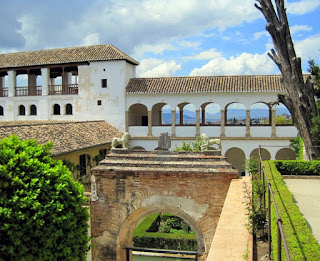 I couldn’t help but ask my usual Public Health Research Question at such a comment: “Were you not using protection or did you use protection and it failed?”

“I’ve gone so long not using protection that I figured I was impotent,” the man replied.

Three of the women left and the American boy slapped his forehead in anguish. But there were five women remaining! The boy was still in the game!

We moved on to the next place: a dance club. Dancing! I love dancing, but I haven’t done it in so long because you need a good group of folks, rockin’ music, and a safe vibe for it to flow well. But all elements were there– and so we danced! It was Hip Hop, it was Latin, it was Salsa, it was great DJing… It was fabulous! 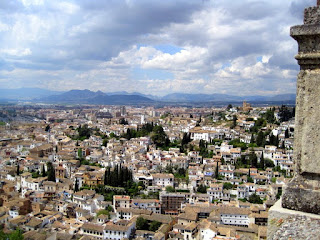 Half an hour in, the Irish and French girls disappeared to request songs from the DJ. They returned quickly, dejected.

“He says he doesn’t have Justin Timberlake!” the French girl growled in Spanish. The girls tried to keep dancing, but the wind had been taken out of their sails.

Inspired (or rather, excited by the challenge to successfully request), I approached the DJ’s throne.

“Do you have the song ‘Destination Unknown’?” I screamed in Spanish over the beats. 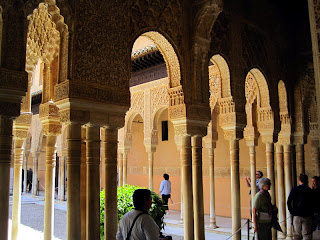 This was a blow. Oh, that song, that song! Perhaps you can tell why I like it. The lyrics go like this:

“I left my job, my boss, my car, and my home… I’m headed for a destination I still don’t know.”

But it wouldn’t be played that night. Ah well. And so I went back to dancing to the good stuff that was on. At this point, I realized that two more of the women had left for sleep. We were down to three women and three men. The American boy’s eyes were bright and he was hollering things like: “Shake it! Shake it!” clinging on to the remaining feminine possibilities. 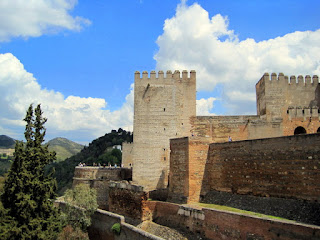 Ten minutes later, I felt a tap on my arm. “We’re headed back,” said the Irish girl. “You know when you have a song in your head you want to hear and you can’t hear it and then you can’t focus on anything else? Well it’s annoying us.”

“I mean, how could a DJ not have Justin Timberlake?” added the French girl in fury.

I glanced around, did the gender and power math, and said: “I’m coming with you.” Naturally, the American boy followed as well. The two hostel guides were at the bar and on the street, respectively, at this point and waved goodbye, distracted.

We walked through the winding streets of Granada, passing packed falafel and kebab stands and the two other girls began singing: “Cry me a rii-ver, oh! Cry me a riii-veeeer, oh!” 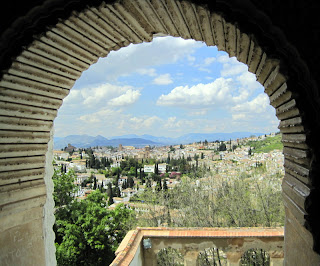 The third pack we passed of men munching kebabs began joining in to the song and we could still hear them belting out Justin’s tune as we turned the final turn to our hostel: “Cry me a riiii-ver! Oh!”

“Who wants hot cocoa?” asked the American boy when we arrived at Oasis, eager as a bouncy puppy. We drank the freshly-stirred cocoa and heard about the boy’s study abroad program in Scotland. I had some deep thoughts regarding the concept of age and the fact that I was about ten years older than this young scamp.

“Hey,” said one of the girls suddenly, “did your friends ever make it back from that forest hippie town?” 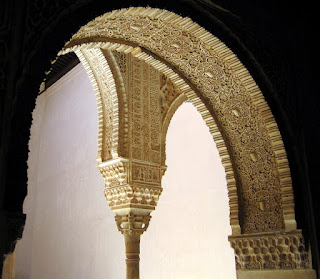 “Nope,” I said, “and I think I just have to let it go.” And with that, I ascended up to my dorm and tried my hardest not to wake my other nine roommates while fishing around in the dark for my toothbrush and contact lens solution. When my pillow fell behind a snoring girl’s bed, I balled up my smoky sweater and slept on that.

All this occurred over the course of twenty-four hours: A disappearance into a leafy hippie commune… Six hours in one of the most magnificent palaces ever built… A night of song and dance with characters from around the globe… And a fitful sleep on a balled-up sweater in a bunk bed in a packed room. Forcing it, all!

Previous Post: « An Important Pre-Travel Warning About Your Passport
Next Post: The 300th Article in 9 Months, 2 Weeks Before Boston! »