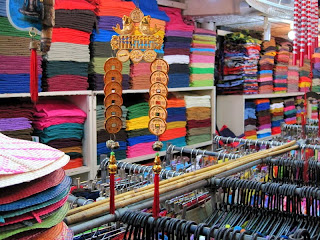 “What the–” mumbled Stevie from the bus floor where he had been fitfully sleeping on his balled-up pants for the past eight hours. Everyone else peered from under their face masks in utter confusion.

It was 3am. We weren’t supposed to arrive until 6am. “Can we just keep driving around?” asked a small voice from the back.

And yet there we were, then, under the glaring bus stop streetlights, haggling with the cab driver to take us to Silom road to a famous hostel that we didn’t even know would take us at this time of night. 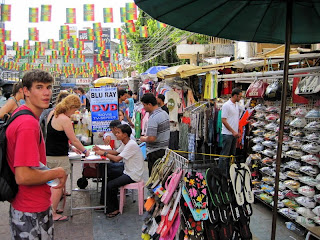 “Will you put on your meter?” asked Stevie, the carpenter from Wales, hardened from months of living in Thailand.

80 Baht later (by the meter– smart Stevie!), we arrived at the famed Lub d hostel, named by The Observer as one of the 17 Coolest Hostels in the WORLD to hang out. 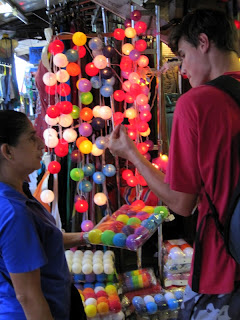 Indeed it was. The glittering lobby slurped us in and all our dreams came true. I was able to stay for free for the night in the dorm, even though my reservations weren’t until the next two nights. 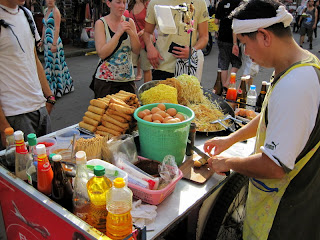 Stevie was allowed to use the internet for free and snuggle up secretly in the giant “theater” room, which smelled slightly rank but was softer than the bus floor or the street.

Look how gorgeous these beds and shared bathrooms are. Ikea, incarnate! With the free night and the two-for-one-night promotion going on, all this goodness was purchased for $5 a night! 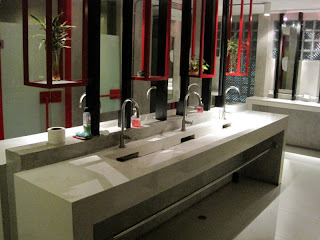 We will not speak of the every-two-seconds hacking cough of the girl below me all the night, nor of the German woman who threatened to beat her up, nor of begging the receptionist (successfully) to move me to a different dorm. All positive thoughts for Lub d! 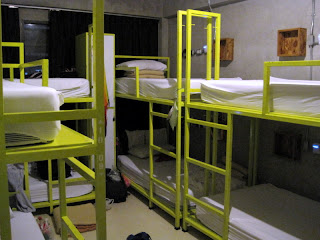 The next day, Stevie took me to the swirling tourist epicenter of Bangkok: Khao San road. Colors! Tourists! Commerce! Note the highlights:

– Fish that eat the dead flesh off your feet

– Fake ID stands so you can become an official college graduate, journalist, driver, 21-year-old, DEA Agent, etc. (“NO PICTURES!!” screamed the owner as Stevie and I sprinted away) 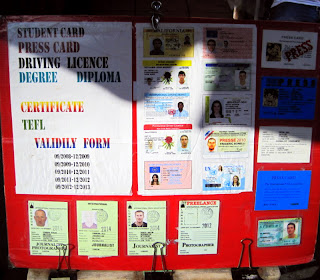 – A brass monkey clutching a brass penis pendant for 500 Baht in the middle of the street and 50 Baht two streets over. (I suggested to Stevie that this would be a classy gift for his girlfriend)

– 7-11 Stores every three seconds, many face-to-face across the street 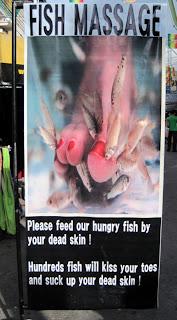 – Fake dreadlocks, which a dreaded man intently crocheted from both plastic thread and real hair (and which my buddies bravely tried on) …yum.

– Tucked in the back of each store: a Buddhist shrine. This country is very religious! Each little shrine has small bowls of daily food offerings. On one street corner, giant rats were covertly nibbling Buddha’s food. He’s a generous soul, I hear– perhaps he won’t mind. 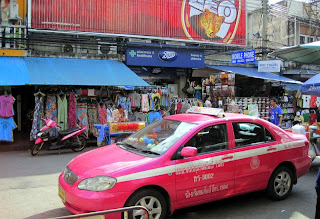 – Loving posters to the King and Queen, who are utterly revered and believed to be descended from divinity. (For this reason, you are never supposed to deface or mistreat Thai money, as it has the image of the royals upon it). 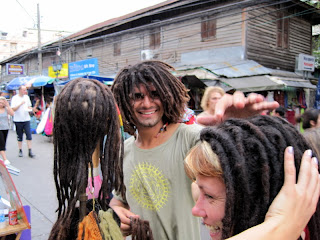 Time flew and Stevie hopped a taxi to the airport to meet his girlfriend in Indonesia. We didn’t exchange contact info, content with our happy companionship for the previous 24 hours, but I still had to choke down my obsessive need to cling to everyone forever!

So then I wandered for two seconds towards the river to catch a taxi back to the hostel, when suddenly– DREADLOCKS! ORANGE FISHERMAN PANTS! DANIEL the Israeli from Ko Tao!

We embraced, he introduced me to his Canadian jeweler friend who was in Thailand and China buying beads for her business, and we spent a lovely evening dining and watching the surging crowds going by and saying “no thanks” the hawkers trying to force us to buy frog noisemakers, rainbow hats, bracelets, lighters, etc. 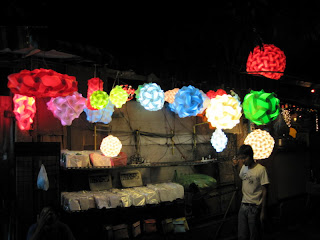 Tomorrow I start to meet up with three of my buddies who have been living in Bangkok for years (ahh, delicious non-tourist-world for a time!) and will begin plans (and malaria pills!) for Cambodia.

It feels good to be moving!

I love the bright pink magenta cabs they indeed are adorable. Especially because I want my car to be pink!